In his practice and in his theoretical dimension, Bolivar, as a ruler and military man, was respectful of the values of equity and inclusion as a guarantee of social transformation after three centuries of colonial domination. In the pen and in the public actions of the Liberator there are examples of fair measures in favor of the environment, the enslaved, soldiers, indigenous people, women, peasants and popular education, always in tune with his ethical vision as a transversal axis of an emancipating ideology.

The Colombian historian Indalecio Liévano Aguirre in his several times published book Bolívar explains the justiciary character of the Liberator as follows:

“Within the Spanish colonial organization in Peru, there existed a small but powerful privileged class, that of the indigenous caciques, to whom that organization had preserved their ancient privileges and their command over the indigenous communities, in order to establish, through them, the hegemony of the conquering race over the natives (…) The Liberator dictated the immortal order whose text we transcribe: The wages of the workers of mines, obrajes and haciendas will have to be paid according to the price that they contract in constant money without forcing them to receive anything against their will or appreciations that are not current in the market. The prophets, governors and judges, prelates, priests and sub-lieutenants, and landowners, owners of mines of obrajes, are prohibited from employing the Indians against their will in the seventh, mixed pongueajes and other kinds of domestic and usual services. No one can demand personal service without a free contract for the price of his work…”.

A State consubstantiated with the idea of Bolivarian justice is the guarantor of life, education, work possibilities, housing, clothing, health and the general respect of all citizen rights. The protection against speculation and the perverse exploitation of the wealthy over the needy majorities are two maxims of the Liberator of great contemporary significance. In such a way that a government inspired by the doctrine of the Man of Difficulties must generate social and economic relations of justice, equity and social inclusion, bases of democratic and authentically revolutionary participation. To be consistent with this Bolivarian principle goes beyond a decalogue of good intentions, it is to create fair daily practices regardless of the social, political, economic, cultural or sexual origin of Venezuelans.

Despite coming from a “cradle of gold”, Simón Bolívar’s life was a rendezvous with the inequities of colonial society. Although he was able to enjoy the sweetness of his fortune, described as one of the largest in the Captaincy General of Venezuela, the Liberator was committed to emancipation from all forms of domination of the most oppressed social and ethnic sectors. A fundamental link in the socio-political conception of the Liberator is undoubtedly his consideration of equality, sister of justice and social security, a trinomial that he always defended as the first revolutionary of his time.

For Simón Bolívar, equality should be an inalienable guarantee for all human beings. Discrimination of race, beliefs, gender or social origin as a pretext for exploitation of others was abhorred by the Man of Difficulties, who demonstrated, at different moments of his existence, the sincerity of his humanitarian thoughts. In such a way that the Republic advocated by Simón Bolívar, an idea that was maturing in time and that came to contradict his own class interests, was not a political model for the enlightened elites or for the owners, but a system of great revolutionary content as an option for the physical and spiritual liberation of the people.

The Law of Distribution of National Assets among the military of the Republican Army issued by Simón Bolívar in Angostura on October 10, 1817, reads as follows:

“Considering that the first duty of the Government is to reward the services of the virtuous defenders of the Republic, who generously sacrifice their lives and property for the liberty and happiness of the fatherland, have sustained and sustain the disastrous war of Independence, while neither they nor their relatives have the means of subsistence (…). ) All real and immovable property, which in accordance with the aforementioned decree and regulations, have been seized and confiscated, or should be seized and confiscated, and have not been sold nor can be sold for the benefit of the national treasury, will be distributed and awarded to the generals, chiefs, officers and soldiers of the Republic, in the terms that will be expressed below”.

And the Liberator continued, in eight more articles, arguing the characteristics of this equalizing and strategic measure for the popularization of the War of Independence.

Simón Bolívar was a tireless fighter for the happiness of human beings. Beyond the ups and downs of the war of emancipation, the Liberator was faithful to his egalitarian convictions, born of his personal experiences and the enlightened thinking of his time. A government that calls itself Bolivarian is a clear promoter of the social equality of Venezuelans. This explains that any remnant of exclusionary inspiration, which denies the popular demands, must be fought within a framework of legality by the conscious and efficient participation of the majorities.

He was not a God, an unpolluted being, without error or shortcomings. Nor was he a learned being, born with the gift of command and universal thought. Bolivar is not the character only expressed in the solemnity of statues, or in the dignity of pantheons and museums. Nor is he only the effigy engraved on our coins. Or that of the colorful national banknotes. There is much more. The paralyzing cult of the Liberator is always harmful, that contemplation that positions him as a gifted person, a superhero of the new times. If we dehumanize the Liberator we distance him from the common people, we empty him of warmth, of meaning, of vitality.

He was human, too human, and it is possible that some of his actions do not appeal to us, and we may not like them today. Have we committed heresy in saying this? To assert that the man from Caracas was of flesh and blood does not minimize his greatness, on the contrary, it places him in the right perspective to evaluate an existence devoted to an ideal, to a transcendental project. Bolivar lived in first person the war of Independence. He saw first-hand the lack of a majority capable of taking the republican path after three centuries of colonialism. This explains, to a large extent, his dynamic notion of the people as set forth in his main documents. Although in 1812 he refers to the people as a conglomerate of “stupid people who do not know the value of their rights”, the lesson of the fall of the Second Republic makes him take back his harsh considerations.

After Jamaica, in 1815, he was more considerate of blacks, dark-skinned people and Indians, which speaks of a statesman who was more paternalistic than contemptuous. In Angostura, by 1819, he described himself as an instrument of the petitions of the most humble. Without disregarding the contributions of the Creoles, the Liberator opened the channels of popular elections as one of the ways for the dispossessed, under the responsibility of the State, to achieve “political virtues” for a future democracy.

Every idea is a construction, a representation, a dialectical concept and feeling, of a social actor in a given context. Bolivar’s frame of reference was the struggle against foreign shackles. This cannot be lost sight of. Personal experiences, enlightened thinkers and the dynamics of the emancipatory war fed the notion of the Great Man’s people.

To say that there was only one Simón Bolívar during a bloody and prolonged conflict, extensive to very specific countries, is reckless. It is necessary to emphasize that like all politicians, Bolivar evolved. And that change is perceived in the change of image from an inept people to a virtuous people. It could not be otherwise in a revolutionary who remained faithful to the democratic, republican creed, based on social equality, in his anti-colonialist actions, in Hispanic-American unity and in moral perfection. Let this reflection benefit those devoted to the aristocratization of the Man of Difficulties.

From very early on, Simón Bolívar understood that having an effective international policy was a guarantee of our American independence. Also, since his military actions after 1817, the Liberator sensed the ambiguous U.S. diplomacy aimed at preventing the emancipation of these territories. His suspicions were supported by the objections to give the go-ahead to the Colombian Government; and the impediment of the arrival of troops and supplies favorable to the emancipation cause, among other obstructionist measures.

Later on, Bolivar would warn Francisco de Paula Santander about inviting the Americans to the Amphictyonic Congress of Panama. The Liberator’s ideas and actions aimed at continental unity with the objective of liberating Cuba and Puerto Rico clashed with the interests of the U.S. rulers and the domestic oligarchies. Everything foreshadowed the hidden purpose of Washington’s sons: to inherit the imperial domination of the colonies liberated from Spain under the new Monroist cloak.

In the little-publicized letter of August 5, 1829 sent by the Liberator from Guayaquil to Colonel Patricio Campbell, the non-interventionist character of Simón Bolívar is synthesized: “And what would the United States not do… who seem destined by Providence to plague America with miseries in the name of liberty?

The basic problem of the imperialists of all times is, in addition to the plundering of their colonies, the disrespect for the sovereignty and independence of the countries considered peripheral. The right of peoples to decide their own forms of government, to achieve their full development and to establish themselves without external interference within the framework of the principle of equality, is the main obstacle for the exploiters of all eras. Thus, the power of a people to determine their place in the international context, as well as the free choice of their internal political organization, contradicts current gringo interventions. In this sense, the Liberator and the Bolivarian Revolution are necessary references. 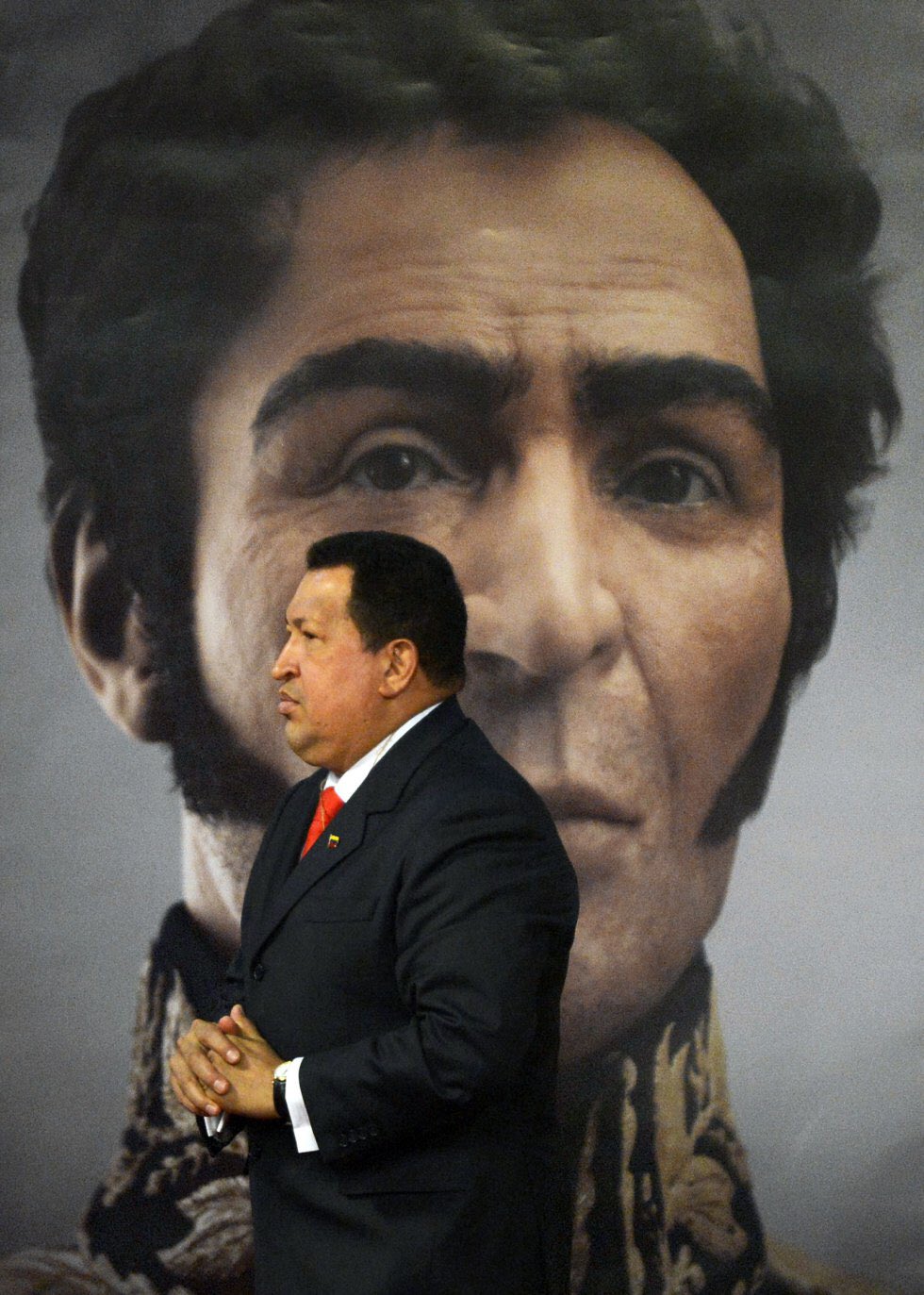 Thus, to be Bolivarian is to be anti-imperialist, to maintain a firm stance against any foreign interference. The U.S. interference in Venezuelan history is not an elaboration, historical evidence explains how since our struggle for Independence the Yankee State was committed to colonialism, and today continues with its interventionist, expansionist and oppressive doctrine. The maxim “America for the Americans” translates into a gross constant of the gringo way of being: providentialist, dogmatic, pragmatic, materialistic, arrogant and stubborn. Just look at the extent of Joe Biden’s Executive Order, to illustrate what we are saying. In the past, as in these days, when we commemorate 238 years since the birth of the Liberator, with Simón Bolívar and Hugo Chávez at the head, we shout “Unity!