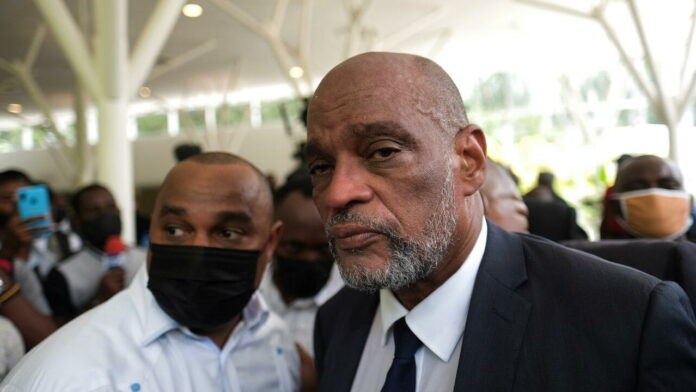 Dr. Ariel Henry (above) has been installed as Haiti’s new Prime Minister under pressure from the Core Group, a group of U.S.-aligned ambassadors to Haiti. Photo:Ricardo Arduengo/Reuters

The United States, seconded by other “Core Group” nations like France, Canada, Germany, Spain, and Brazil, pushed out Haiti’s Interim Prime Minister Claude Joseph in favor of Dr. Ariel Henry, 71, who was installed as the new Prime Minister on Tue., Jul. 20.

Joseph had assumed the role of leading the Haitian state in the aftermath of de facto President Jovenel Moïse’s assassination on Wed., Jul. 7 because Henry, who had been named to the PM post on Jul. 5, could not be found, apparently evading a security detail which had come to fetch him to take over as Haiti’s leader, a reliable source explained to Haïti Liberté. Henry, a neurologist and former minister, had been scheduled to be sworn-in later on the fateful day. But since Henry made himself scarce (perhaps frightened by the Moïse’s grisly murder), Joseph seized power and refused to relinquish it when Henry re-emerged a few days later, arguing that he was the rightful occupant of the PM offices.

As a tense rivalry between the two men emerged, Haiti’s bourgeois opposition quickly embraced Henry’s challenge to Joseph with a Jul. 9 “Protocol of National Agreement” accord, although it had rejected his initial appointment. Their hopes that he would make a coalition government to their liking were dashed, however, when he announced his new cabinet, in which most of the key posts remained in the hands of those appointed by Jovenel: Claude Joseph remained as Foreign Minister, Rockefeller Vincent as Justice Minister, Michel Patrick Boivert as Finance Minister, and Marie Greta Roy Clément as Health Minister.

The only really prominent (but not very popular) opposition politician put in an important post was Simon Dieusel Desras, who was named Minister of Planning and External Cooperation, responsible for finding and managing foreign aid. Desras had previously been Defense Minister and Environment Minister under the one-year presidency of Jocelerme Privert (2016-2017), and a senator from the Lavalas Family party for the Center Department.

“AAA has distanced itself from the government of Ariel Henry,” griped DIRPOD and Haiti in Action (AAA) party leader Youri Latortue on Twitter Jul. 20 after the cabinet announcement. “All key positions go to PHTK+allies, violating consensus and renewing the officials that caused initial popular discontent. Democratic legitimacy appears not to concern Mr. Henry.”

Washington tried to hide its role in pressuring for the switch from Joseph to Henry. “We are taking the side of the Haitian people,” said U.S. State Department spokesman, Ned Price, in a Jul. 19 press conference. “This is a dialogue that has been ongoing between various Haitian political stakeholders.”

“Ned, whether you want to admit it or not, there was a shift in what you had been saying,” responded the Associated Press’ Matt Lee. “You were all in support of the acting prime minister, and then, all of a sudden, on Saturday, you and the other members of the Core Group came out in support of Mr. Henry.”

Nonetheless, both Joseph and Henry are U.S. allies. The National Endowment for Democracy (NED), an institute spun out of the CIA in 1983 to implement Washington’s regime change and neocolony maintenance agenda worldwide, backed Joseph as a pro-coup “human rights” and student “leader” in the run-up to the 2004 overthrow of President Jean-Bertrand Aristide. In concert with Joseph’s role, Henry was part of the U.S.-concocted “Council of Wise People” which provided the window-dressing to facilitate the transfer of power from Aristide to de facto Prime Minister Gérard Latortue after the Feb. 29, 2004 coup.

Meanwhile, new details about and suspects in the machine-gunning of Jovenel Moïse emerged this week. On Wed., Jul. 14, Haïti Liberté broke the story that it was the Colombian mercenaries (not the presidential security unit, as some had speculated) who killed Moïse and wounded his wife, Martine Moïse. The mangling of his body was done by the close-range automatic weapon fire, not torture. The next day, the Colombian daily La Semana released a report that one of the 26 captured Colombian mercenaries had tearfully broken down under interrogation to confess that it was a secret team of seven assassins which killed Moïse. The other 19 mercenaries were duped into thinking that they were protecting an important person.

Another La Semana report on Jul. 17 revealed the details of the killing from the account Martine Moïse gave to U.S. Federal Bureau of Investigation (FBI) agents when they visited her Miami hospital room. (She returned to Haiti on Jul. 18.) Both the FBI and Colombian government investigators are taking part in the assassination probe.

”Honey, we’re dead ,” Moïse told his wife when they heard the gunfire approaching their bedroom, the report said. She hid their two kids in the bathroom and then returned to her husband. They “decided to hide under the bed, with their faces to the floor.” Unfortunately, “their feet were exposed.”

The assassins forced their way into the room and “while they attacked them, they were communicating over the phone with someone giving the orders,” La Semana continues.

They shot her first and tried to pull her out, “but half of her body was still under the bed. She even managed to tell the president she was alive.”

Then the mercenaries pulled him out from under the bed and “began to describe him: ‘Tall, thin, dark skin,’ they said. She heard another man on the other end of the phone give the order to execute him when he confirmed it was the president.”

Martine Moïse told the FBI that she ”watched the president die next to her” after he was riddled with automatic weapon fire.

Before the mercenaries left, they pulled her out from under the bed and shined a flashlight in her face, wanting to confirm she was dead. She “didn’t move or shake, because she knew that if she did, they would finish her off,” the report concluded.

On Jul. 16, CNN reported that, according to Colombian police, mercenaries German Rivera and the late Duberney Capador (who was killed by Haitian police) led the seven assassins and received the order to kill Moïse by phone from a former Haitian official, Joseph Félix Badio, who is now being sought by Haitian police.

Badio had been the chief of staff at the Inspection General of the Haitian National Police’s (IGPNH) Unit for the Fight Against Corruption (ULCC), according to his LinkedIn profile. He was fired from his post on May 17 due to “serious breaches in professional conduct” according to a Jul. 13 ULCC statement.

Despite the arrest of pastor/doctor Christian Emmanuel Sanon last week and the hunt for Badio this week, Mathias Pierre, Haiti’s election minister, believes that the real authors of the crime are still unknown and at large.

“Such a plot for an assassination is not the work of the two people [alone],” Pierre told The Guardian. “We know that there are big fishes out there that wanted the death and are part of the plot to kill the president … There are more powerful people behind this… We do believe that the president had a lot of enemies – people who didn’t agree with his plan and programs, and certainly with his agenda. And we believe they might be linked to this crime.”

On Jul. 16, CNN reported that a senior Haitian government source said: “We think four police officers were working with Badio to neutralize the police around the President’s house to facilitate access. One police officer has been arrested, three are at large.”

At a press conference, PNH chief Léon Charles that 24 Haitian police officers were currently under “precautionary measures,” and some of them had been at the president’s house on the night of the murder.

Moïse was commemorated by a brief ceremony for government officials at the National Pantheon Museum (MUPANAH) in the capital’s Champ de Mars on Jul. 20, before the swearing in of Henry. Around the capital region, there are few signs of national mourning for the late embattled president other than two shrines of flowers and posters with a handful of people at the road to his home in Pèlerin 5 above Pétionville and at the National Palace in downtown Port-au-Prince. However, massive marches poured through the streets of both Port-de-Paix and Trou du Nord, the respective northern hometowns of Martine and Jovenel Moïse.

Jovenel Moïse will be buried on Fri., Jul. 23 with another funeral service in the city of Cap Haïtien, the capital of the northern region where he grew up.