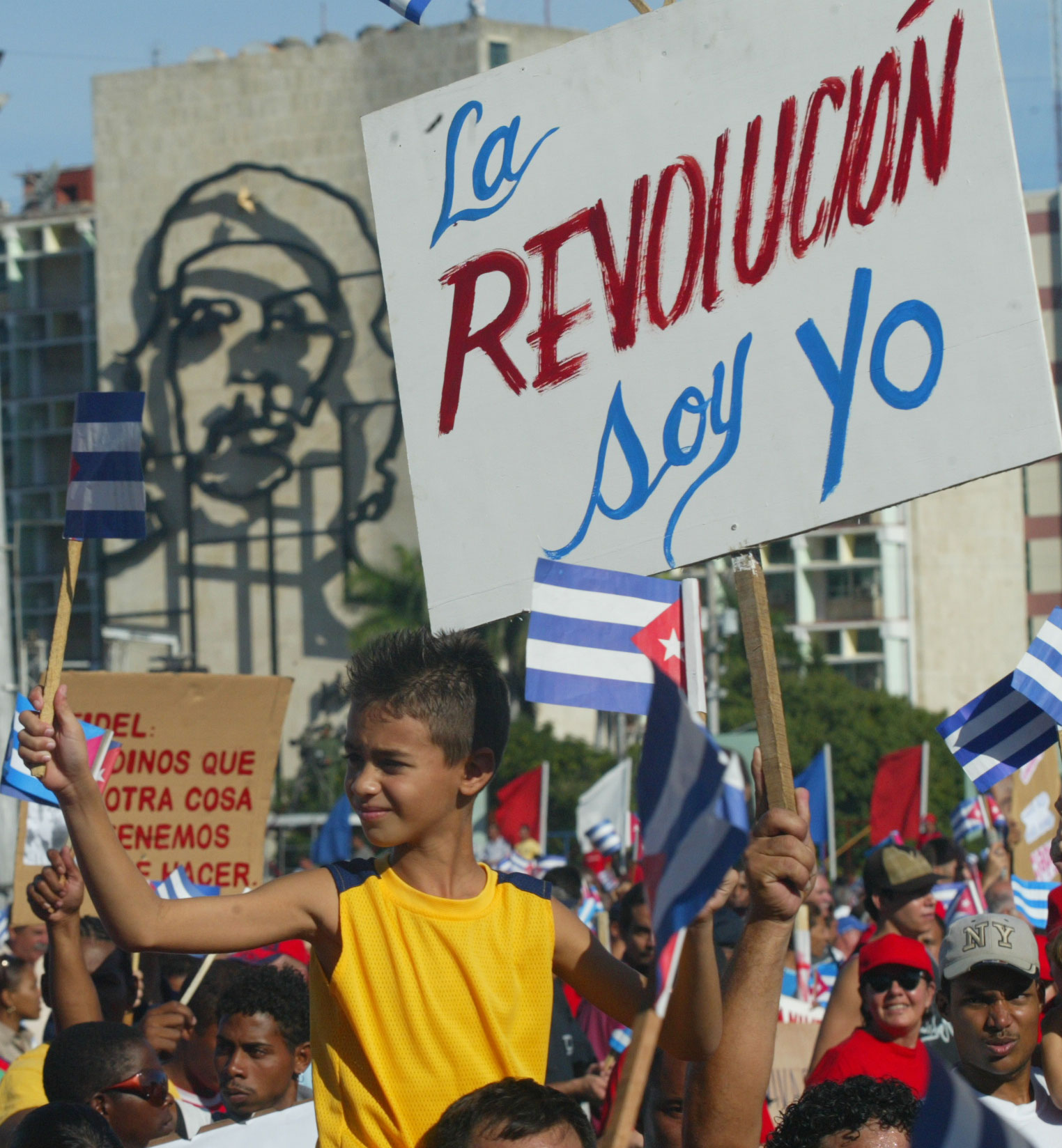 I do not wish the future of Cuba to be like the present of Brazil, Guatemala, Honduras or even Puerto Rico,

Few are unaware of my solidarity with the Cuban Revolution. For 40 years I frequently visited the island for work commitments and invitations to events. For a long period, I mediated the resumption of the dialogue between the Catholic bishops and the Cuban government, as described in my books Fidel and Religion (Fontanar/Companhia das Letras) and Paradise Lost, Journeys to the Socialist World (Rocco).

Currently, under contract with the FAO, I advise the Cuban government in the implementation of the Food Sovereignty and Nutritional Education Plan.

I know in detail the Cuban daily life, including the difficulties faced by the population, the challenges to the Revolution, the criticisms of the country’s intellectuals and artists. I visited prisons, talked to opponents of the Revolution, lived with Cuban priests and lay people opposed to socialism.

When they tell me, a Brazilian, that there is no democracy in Cuba, I descend from the abstraction of words to reality.

How many photos and news have been seen or are seen of Cubans in misery, beggars scattered on the sidewalks, children abandoned in the streets, families under the viaducts? Something similar to the cracolândia, to the militias, to the long lines of sick people waiting years to be treated in a hospital?

There is nothing more prostituted than language. The famous democracy born in Greece has its merits, but it is good to remember that, at that time, Athens had 20,000 inhabitants who lived off the work of 400,000 slaves… What would one of those thousands of servants answer if asked about the virtues of democracy?

I do not wish for the future of Cuba the present of Brazil, Guatemala, Honduras or even Puerto Rico, a U.S. colony that was denied independence. Nor do I want Cuba to invade the United States and occupy a coastal area of California, as in the case of Guantanamo, which has been transformed into a torture center and an illegal prison for alleged terrorists.

Democracy, in my concept, means the ‘Our Father’ -the authority legitimized by the popular will- and the ‘Our Bread’ -the sharing of the fruits of nature and human labor-. Electoral rotation does not make or ensure a democracy. Brazil and India, considered democracies, are flagrant examples of misery, poverty, exclusion, oppression and suffering.

Only those who know the reality of Cuba before 1959 know why Fidel had so much popular support to lead the Revolution to victory.

The country was known by the nickname ‘brothel of the Caribbean’. The mafia dominated the banks and tourism (there are several movies about this). Havana’s main neighborhood, still called Vedado, has this name because blacks were not allowed to circulate there….

The United States was never satisfied with having lost the Cuba subjected to its ambitions. Therefore, shortly after the victory of the guerrillas of the Sierra Maestra, they tried to invade the island with mercenary troops. They were defeated in April 1961. The following year, President Kennedy decreed the blockade of Cuba, which continues to this day.

Cuba is an island with few resources. It is forced to import more than 60 percent of the country’s essential products. With the tightening of the blockade promoted by Trump (243 new measures and, for the moment, not withdrawn by Biden), and the pandemic, which has completely eliminated one of the country’s main sources of resources, tourism, the internal situation has worsened.

Cubans had to tighten their belts. Then, those dissatisfied with the Revolution, who gravitate in the orbit of the ‘American dream’, promoted the protests of Sunday, July 11, with the ‘solidarity’ support of the CIA, whose chief has just made a tour of the continent, worried about the results of the elections in Peru and Chile.

Who best explains the current situation in Cuba is its president, Díaz-Canel:

“The financial, economic, commercial and energy persecution has begun. They (the White House) want to provoke an internal social explosion in Cuba to ask for ‘humanitarian missions’ that will translate into invasions and military interference. We have been honest, we have been transparent, we have been clear, and at all times we have explained to our people the complexities of the current situation. I remember that more than a year and a half ago, when the second half of 2019 began, we had to explain that we were in a difficult situation. The United States began to intensify a series of restrictive measures, tightening of the blockade, financial persecutions against the energy sector, with the aim of stifling our economy. This would provoke the desired massive social outburst, in order to call for a ‘humanitarian’ intervention, which would end in military interventions.”

“This situation continued, then came the 243 measures (by Trump, to tighten the blockade) that we all know, and finally it was decided to include Cuba in the list of countries sponsoring terrorism. All these restrictions led the country to immediately cut off several sources of foreign currency income, such as tourism, travel of Cuban-Americans to our country and remittances. A plan was formed to discredit the Cuban medical brigades and the solidarity collaborations of Cuba, which received an important part of foreign currency for this collaboration.”

“All this has generated a situation of shortage in the country, mainly of food, medicines, raw materials and inputs to be able to develop our economic and productive processes which, at the same time, contribute to exports. Two important elements are eliminated: the capacity to export and the capacity to invest resources. We also have limitations in fuel and spare parts, and all this has caused a level of dissatisfaction, added to accumulated problems that we have been able to solve and that came from the Special Period (1990-1995, when the Soviet Union collapsed, with serious repercussions on the Cuban economy). Together with a fierce media smear campaign, as part of the unconventional war, which tries to fracture the unity between the party, the State and the people; and intends to qualify the government as insufficient and incapable of providing welfare to the Cuban people.”

“The example of the Cuban Revolution has greatly annoyed the United States for 60 years. They applied an unjust, criminal and cruel blockade, now intensified in the pandemic. Blockade and restrictive actions that they have never carried out against any other country, not even against those they consider their main enemies. Therefore, it has been a perverse policy against a small island that only aspires to defend its independence, its sovereignty and to build its society with self-determination, according to the principles that more than 86 percent of the population has supported.”

“In the midst of these conditions the pandemic arises, a pandemic that has affected not only Cuba, but the whole world, including the United States. It affected the rich countries, and it must be said that in the face of this pandemic neither the United States nor these rich countries had all the capacity to deal with its effects. The poor were harmed, because there are no public policies aimed at the people, and there are indicators in relation to the confrontation of the pandemic with worse results than those of Cuba in many cases. Infection and mortality rates per million inhabitants are notably higher in the United States than in Cuba (the United States has registered 1,724 deaths per million, while Cuba has 47 deaths per million). While the United States is entrenched in vaccine nationalism, the Henry Reeve Brigade of Cuban doctors continues its work among the world’s poorest (for which, of course, it deserves the Nobel Peace Prize).”

“Without the possibility of successfully invading Cuba, the United States persists in a rigid blockade. After the fall of the USSR, which provided the island with ways to circumvent the blockade, the United States sought to increase its control over the Caribbean country. Beginning in 1992, the UN General Assembly voted overwhelmingly to end the blockade. The Cuban government reported that between April 2019 and March 2020 Cuba lost 5 billion dollars in potential trade due to the blockade; in the last almost six decades, it lost the equivalent of 144 billion dollars. Now, the U.S. government has deepened sanctions against shipping companies that bring oil to the island.”

It is this fragility that opens a flank to demonstrations of discontent, without the government putting tanks and troops in the streets. The resistance of the Cuban people, nourished by examples such as Martí, Che Guevara and Fidel, has proven to be invincible. And we must, all of us who fight for a more just world, stand in solidarity with them.