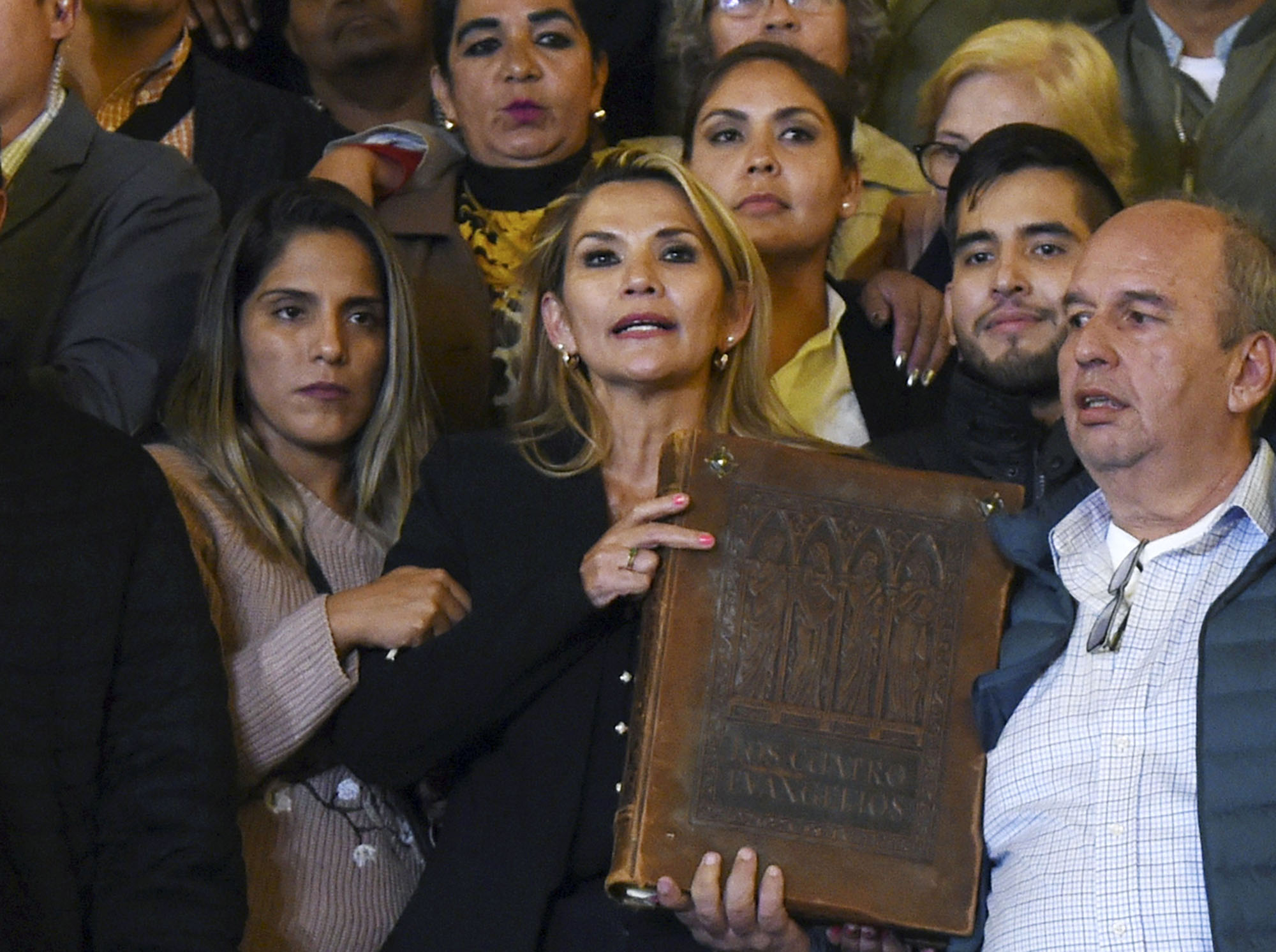 According to the spokesman of the Bolivian government Jorge Richter, Brazil and Chile may have been involved in clashes between protesters and security forces that took place in the country following the resignation of Evo Morales in 2019. Richter said that possible international collaboration will now be investigated, without giving further details.

Richter’s announcement came after the Bolivian government denounced the participation of the former president of Argentina, Mauricio Macri, in the 2019 coup d’état against Bolivia’s re-elected President Evo Morales. Foreign Minister Rogelio Mayta revealed documents proving the shipment of ammunition by Macri, as well as his Ecuadorian counterpart Lenín Moreno, which were used by police forces in Bolivia to repress popular protests against the de facto government of Jeanine Áñez.

The president of the Bolivian Chamber of Deputies, Freddy Mamani, announced a proposal to create a commission of inquiry to investigate not only the accusations against Macri but also the possibility that other governments may have collaborated with the coup plotters.

Mamani did not hide which governments will be investigated: Jair Bolsonaro in Brazil and Sebastián Piñera in Chile. Openly hostile to Evo Morales and his party the MAS (Movement toward Socialism), both countries have maintained an animosity toward the current progressive government of Luis Arce. In contrast, both supported the administration of Jeanine Áñez, the “interim” president who was installed by the Armed Forces after the 2019 coup.

The relationship between Bolsonaro and the Bolivian far right have been documented by Brasil Wire in the past, and the links between Brazilian fascists and their Bolivian counterparts are very clear. Brazil was one of the first countries to recognize Jeanine Áñez as president.

Luís Fernando Camacho, political leader of Santa Cruz de la Sierra, has also expressed a deep admiration for Bolsonaro’s government. In May of 2019, Camacho released a video on social media in which he said he had asked the former Brazilian Foreign Minister Ernesto Araújo for help in consulting the Inter-American Commission on Human Rights on the possibility of preventing Morales’ attempt to win a fourth term. Contact between Camacho’s and Bolsonaro’s allies began much earlier.  At the end of 2018, many Latin American leaders and businessmen travelled to the Brazilian city of Foz do Iguaçu to participate in a conservative summit organized by Deputy Eduardo Bolsonaro, the president of the Chamber’s Committee on Foreign Affairs and National Defence .

The current Argentine president, Alberto Fernandez, who was himself sworn in a month after the coup, has apologized to the Bolivian people on behalf of his predecessor for sending the weapons. Argentine investigations show indications that then-President Mauricio Macri sent arms and ammunition to repress supporters of Evo Morales. The Public Ministry of Argentina opened a formal investigation to find out the extent of the crimes committed by the former president. Among the authorities to be investigated for the charge of international interference and arms shipments besides Macri himself and two former ministers: Patricia Bullrich, from Security, and Oscar Aguad, from Defence.

According the Argentinian newspaper El Orsai the CIA station in La Paz instructed the Chief of Argentine Intelligence Agency (AFI, by its abbreviation in Spanish) in Bolivia, José Sanchez, to support the gathering of information on Evo Morales and his administrations; and all Cuban, Venezuelan and Nicaraguan officials residing in Bolivia, including diplomats. In order to comply with the above José Sánchez not only used his agents in the country, but also requested the support of representatives in Brasil, Colombia and Perú. 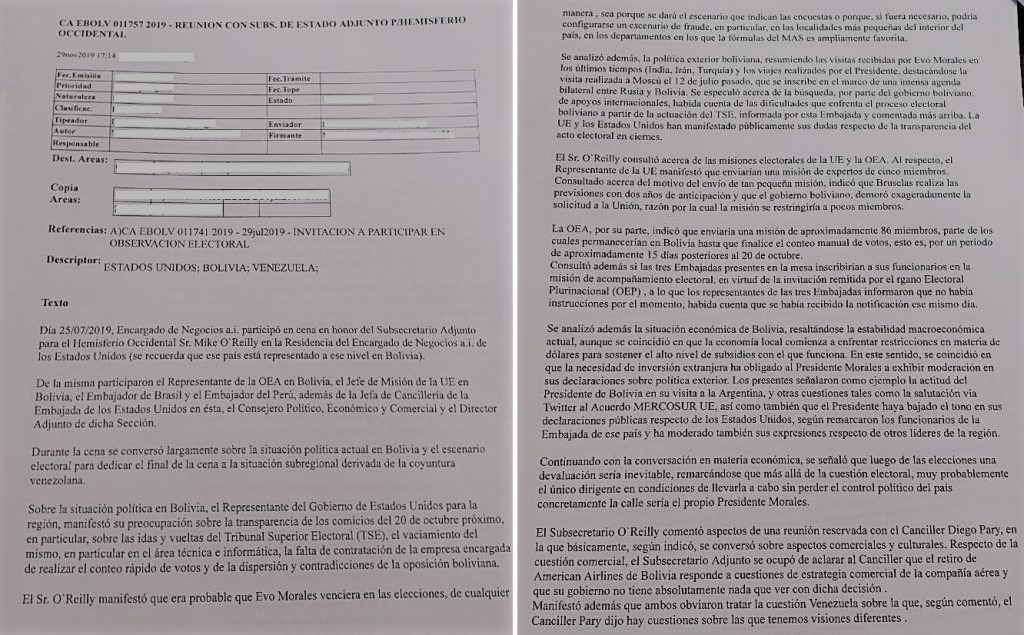 Documents from the Argentine embassy in La Paz show details of a meeting in July 2019 where Deputy Secretary of State for the Western Hemisphere of the United States Kevin Michael O’Reilly warned that Evo would likely win the presidential election, and asked for OAS, the EU, Brazil, Argentina and Peru to question the transparency and legitimacy of the elections. One of the most interesting passages of the document says that the Bolivian political scene is dependent on what happens in Venezuela, adding to growing evidence of a wider plan to destabilise the regional left. Evo Morales’ trips abroad were also analyzed, and Mr O’Reilly pointed out that there was concern about the growing rapprochement between Morales and the Russian government.

Recently, Morales warned about the implementation of the new Operation Condor in Latin America. Uurging social movements to fight for peace, democracy, and sovereignty, Morales rejected U.S.-backed coups that “cause pain to Latin American peoples”.

When asked about the visit, Bolsonaro said:

“I’m not going to say that this was dealt with him, but we analyzed how things are going in South America.  We can’t stand to talk about Venezuela anymore, but look at Argentina.  Where is Chile going?  What happened in Bolivia?  The Evo Morales gang returned.  And even more: the president who was there in the interim term is in prison, accused of undemocratic acts. Are you feeling any resemblance to Brazil?”.

Condor 2.0: Bolivia is investigating how South America's right-wing governments, including Brazil, Chile, Ecuador, and Argentina, joined the US in support of the 2019 coup, and assisted violent repression of resistance to it.