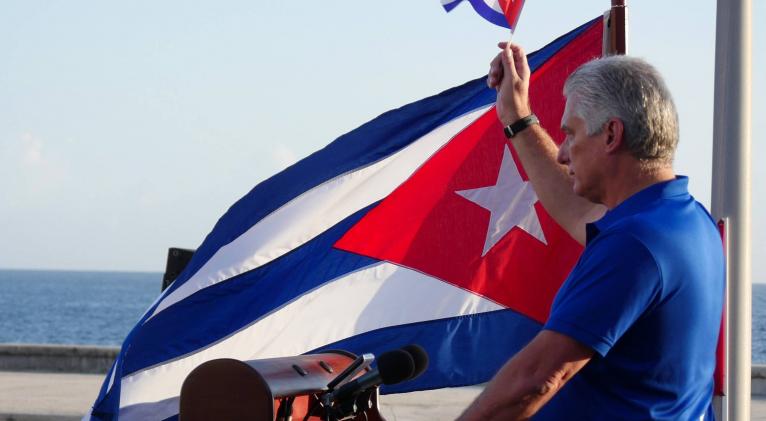 Speech delivered by Miguel Mario Díaz-Canel Bermúdez, president of the Republic of Cuba, in the act of revolutionary reaffirmation, in the esplanade of La Piragua, Havana, on July 17, 2021, Year 63 of the Revolution.

Free from foreign interference and free from the hatred that has been stirred up by those who have been tightening the neck of the nation for 60 years to blow it up and now want to present themselves as our saviors.

Cease lies, infamy and hatred. Cuba is deeply allergic to hatred. And it will never be a land of hatred!

Nothing good is built from hatred. Hatred robs us of time to love and even love itself if we let it in as a reaction to the hatred that adversely affects us.

We have experienced it in these days of overflowing hatred on social networks, not so “social” networks, which have been the permanent company of parents and children in these long months of the pandemic, to the point that many spend more time connected to the network that connected to the family; that family, that with unity, can be invulnerable in the face of everything that threatens it.

A mother told me yesterday that her adolescent daughter asked, with tears in her eyes, if this was Cuba, when she saw the images of the acts of violence that some of her friends shared on Facebook.

The owners of these networks, the dictators of their algorithms, as a recent documentary well denounces, have opened to hatred, without the slightest ethical control, the floodgates of their powerful platforms.

It is a hatred that fractures family, friends, society, and threatens to take many of our values ​​to the corner of the useless.

The bombardment of images loaded with violence, blood, protests, screams, vandalism, threats, harassment and repression has seen no pauses in the last six days.

In the previous weeks, an intense political-communication operation was developed by a large media intoxication platform, financed by the United States Government and by the Florida political machinery.

Its objective was to encourage unrest and instability in the country, taking advantage of the difficult conditions caused by the pandemic, the intensified blockade and the 243 measures of the Trump administration.

In those days they carried out acts of Unconventional Warfare that included calls for social outbreak, violence, assault on police officers, vandalism and sabotage.

For this they used artificial intelligence and Big Data systems, cybertropes and acts of cyberterrorism to promote the artisanal manufacture and use of weapons or incendiary elements, integrated actions of harassment, blackmail or financing of digital leaders or international influencers.

They had the complicity of a powerful transnational company that allowed them to violate their own regulations with impunity, and disregarded the legitimate complaints of users and some press media and cable agencies.

Cuban Television has highlighted the objectives of this campaign by reconstructing the events of last Sunday in sequence.

First the protests were called, then the false account of the events was constructed to generate emotional reactions of solidarity with the protesters, and then the vandalism actions that occurred hours before our improvised appearance on television when we returned from San Antonio de los Baños were unleashed.

The path of infamy is clear. Posteriori, all the events have been presented in a disorderly manner, as if they were the fruit of our legitimate call to the revolutionaries to defend the Revolution.

The story is intended to be told backwards. No matter what he said, the calls for unity, peace and solidarity among all do not count. The malicious interpretation is that a civil war was called.

We can dismantle the so-called fake news, break down the lies, show how the entire false reality of Cuba was fabricated in virtual settings, but they have already caused immeasurable damage to the national soul, which has among its most sacred values ​​citizen tranquility, coexistence, solidarity and unity.

We are under the sophisticated fire of a cyber-war that includes cyberterrorism and media terrorism in its aggressive tools.

The Cuban Foreign Minister’s complaints last Tuesday have not been answered. There has not been an attempt to respond by the authorities of the Republican Government of Florida regarding the funds allocated to these projects, with which they intend to attack the country and, at the same time, disarm it from its possible means of defense.

Not only the Minrex, but also the site of the Presidency, the popular portal for news and analysis on the Cuban reality Cubadebate, Granma, Juventud Rebelde and, practically all Cuban public media are suffering intermittent attacks with denial of services in the midst of an atrocious campaign of demonization by the Government.

They try to silence any alternative to the anti-Cuban narrative that today unfolds on alarmist covers. Friends of Cuba, who know and suffer from manipulation and silence, cannot access the Cuban media and have sent us reports of denial of access.

At the height of the lie, false images are used, which has already been well documented by our journalists, the contempt and destruction of property, the compulsion to assault and the threatening harassment of citizens and families are encouraged and glorified.

Right now, what the world is seeing from Cuba is a lie, to an entire people raised up against the Government and to a Government that represses its people.

It is not unusual that, under this media bombardment, some doubt and pronounce themselves assuming a separation that does not exist.

Not with statements, but with facts. When the #SOSMatanzas label was fading in cyberspace, next to Matanzas and all of Cuba, the promoters of the humanitarian intervention were not seen. There was the same noble and supportive people who suffered the consequences of the blockade and there was the Cuban Government.

Who was not shocked to learn that vandals of the worst kind stoned the children’s ward of the Cárdenas hospital, forcing children and mothers to seek refuge in the bathrooms or under the institution’s beds?

Tomorrow many personal stories must be told of the popular reaction to the attack and harassment, of how much the forces of order have had to restrain themselves because of the care demanded of them to avoid excesses; But make no mistake: the majority of the people, the same people overwhelmed and irritated by the deficiencies that better government management demands of us, also ask that violence be stopped (Applause and exclamations of: “Long live our doctors!”).

No lie has been raised by chance or mistake. Everything is coldly calculated according to the Unconventional Warfare manual. The unpresentable of the OAS has already spoken, the ministry of colonies to which we are honored not to belong.

We are not speculating. Some speak for others to speak later. There it is, lurking, the hard wing of the North American Congress sharpening its teeth and demanding that its political adversaries in the current administration act now against Cuba, that they convene the Security Council, and that they consider it a hostile act and a threat to the sacrosanct National security of the empire any attempt at mass emigration to its shores.

None of this is new. They have tried other times. It is his way of putting the opposing administration on the ropes, and trying to make them fulfill the never achieved purpose of erasing from the map the bad example of this small Island, determined to remain sovereign and independent when so many bend to its orders (Exclamations of: “Let the born and the unborn know, we were born to win and not to be defeated!” (Applause).

Almost with mother’s milk, our parents instilled in us a Marti warning: “Men go into two camps: those who love and found, and those who hate and destroy,” the Apostle told us.

When a people has come so far in the realization of their dreams and in the conquest of rights, which for half the planet are a chimera, neither violence nor fear stops them.

None of this that we denounce today separates us from the necessary self-criticism, from the pending rectification, from the profound revision of our methods and styles of work that collide with the will to serve the people, due to the bureaucracy, the obstacles and the insensitivity of some that they hurt so much.

Today I come to reiterate the commitment to work and demand for the fulfillment of the program that we have given ourselves as a Government and as a people, reviewed in the light of the possible errors of these years of intense pressure, particularly the last two.

It is not on a whim that we are meeting here this morning in the midst of a complex epidemiological situation. Respecting as far as possible health measures and physical distancing, we have summoned you to denounce once again the blockade, aggression and terror. We could not delay this meeting, the enemy has once again launched itself with everything to destroy the sacred unity and the tranquility of the city.

We can only have more if we create more. We will achieve what we set out to do by pushing the work together. Ahead we have the immense example of Cuban Science, which was proposed and achieved in record time and with hardly any resources two vaccines and other vaccine candidates that allow us to face the future with hopes that other peoples do not have.

If we have been able to do something so colossal and difficult, what will we not be able to do in other areas?

And, above all, how much more will we be able to if we articulate the pending dialogues, rescuing the social work, promoting greater attention to vulnerable sectors, to the neighborhoods, supported by the experience of the work that the Commander in Chief left us, in challenging years these; that’s what Gerardo called.

The Cuban Revolution forever erased the seeds of evil, hatred, dishonor, and crime. For this reason, it is important that we look for the root causes of the violence that strives to emerge in the face of the needs, and that we fulfill the pending work to make the gene of the braves, the honest, the just, of the honorable ones, of the happy children of this Cuban land (Applause and exclamations of: “Down with the blockade!” “Down with the imperialist aggression!”).

“Only love turns clay into a miracle / Only love illuminates what lasts”, we have sung a thousand times with the artist from Marti Silvio.

Cuba of love, Cuba of peace, Cuba of unity, Cuba of solidarity! ” (Exclamations of: “Long live!”)

Cuba of all Cubans who, wherever they may be, work to see her advance with her own legs and her own arms towards a destiny of possible prosperity! (Exclamations of: “Long live!”).

Give Cuba your heart! Give heart to the Homeland, to the Revolution, to Socialism! 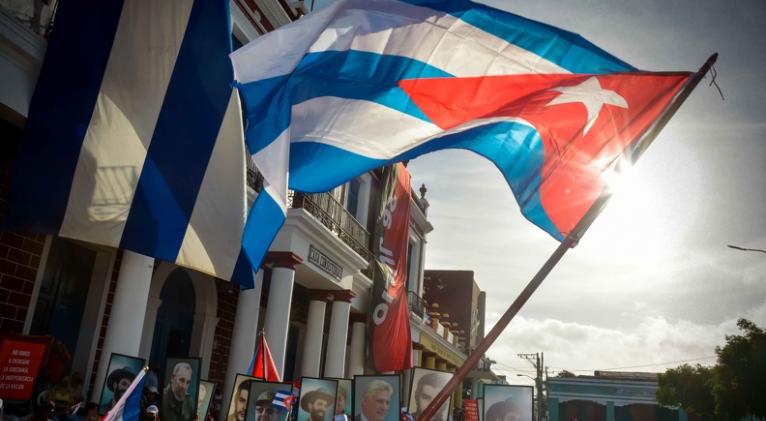