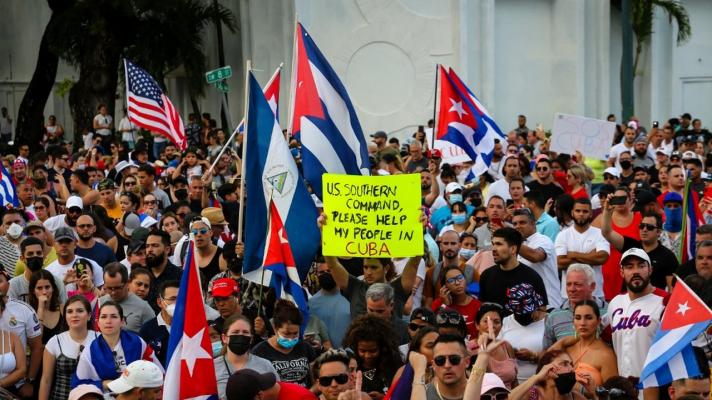 Rally in Miami in support of the protests in Cuba calling for “humanitarian intervention” by the United States (Photo: Eva Marie Uzcátegui / AFP)

For months now, new efforts for “regime change” have been stirring the coals in Cuba under the cover of the San Isidro Movement, a group of artists from the island who have become political activists, using typical “color revolution” tactics that can also be detected in the demonstrations of Sunday, July 11, strongly promoted by US politicians from Florida and anti-Cuban operators in different parts of the world. What is behind it?

According to reports from  anti-Castro sources, the protests began in the cities of San Antonio de los Baños and Palma Soriano, and were quickly replicated in other Cuban cities, with Havana taking center stage in the main Western media.

Although they were not characterized as massive demonstrations against the government of President Miguel Díaz-Canel, they were amplified and manipulated in social networks to pass them off as thousands of Cubans. In The New York Times, its correspondents spoke of “hundreds”, not more, in Havana. In fact, human rights organizations and Twitter accounts used images of mass protests in Egypt and other latitudes to sell this version, being denied even by Mexican President Andrés López Obrador.

The hashtag #SOSCuba and #CorredorHumanitario were used extensively by media fighters of the regional right, with journalists Yoani Sanchez and Patricia Janiot being among the most retweeted and with greater exposure of the visible agenda of the protests.

Among the same demonstrators, U.S. flags were raised and the song “Patria y vida” (Homeland and Life) was sung, interpreted by several Cuban musicians living in Miami (Florida) together with members of the San Isidro Movement who live on the island.

Provocateurs in Cuba wave U.S. flags, a classic in “spontaneous” protests against governments that do not respond to imperial interests pic.twitter.com/18lPxCO5oE

Similarly, what was happening in some streets of Cuba had its mirror in social networks, where messages with the hashtag #SOSCuba were replicated by armies of bots and other Big Data specimens, trying to create in the 2.0 imaginary a multitudinous perception in support of the pro-US agenda.

In case you're wondering why Cuba is trending worldwide…pic.twitter.com/pzYae6DNS1

The Cuban president summoned “the revolutionaries to the streets” in order to confront in situ the new attempts of a “soft coup”. Hundreds and thousands of Cubans also came out to counter-protest in different cities, including Havana, in defense of the revolution. President Díaz-Canel went in person to San Antonio de los Baños to demonstrate.

In contrast to the revolutionary marches, the anti-Castro marches were violent, with looting and destruction of government property and infrastructure. Police vehicles were overturned and attacks by some against the Cuban police, who are known not to carry lethal weapons, were not long in coming, and any action aimed at maintaining order in the face of chaos was met with more belligerent provocation.

Protest and looting all over Cuba to end the communist regime shout freedom pic.twitter.com/1QtZgj53u6

The backdrop of all these “soft coup” actions corresponds to an update in the mechanisms, methods and modes of intervention in the framework of the U.S. agenda against Cuba. All this under a delicate context in the health sector, as a result of the covid-19 pandemic and the onslaught of the economic, financial and commercial blockade on the island, the main spark of all the vicissitudes being experienced in the island nation.

Miami in action: time for intervention

The main protagonist of the difficult situation being experienced by the island is the coronavirus, with the highest number of positive cases and deaths since the beginning of the pandemic. According to Francisco Durán, National Director of Hygiene and Epidemiology of the Cuban Ministry of Public Health (Minsap), this situation is the result of the entry of new variants that are spreading in the country.

In response, the Cuban government will apply new international sanitary control measures as of July 15.

Cuban music groups and operators of the San Isidro Movement have taken advantage of the current situation to ask the “international community” to open a “humanitarian corridor” or for a “humanitarian intervention” in Cuba.

Hence the most direct connection between the protests registered on Sunday, July 11 and the actions of the San Isidro Movement, whose most visible leaders are not only committed to the demonstrations in the style of the manuals of Gene Sharp and his political pupils, but also to the terrorist agenda of anti-Cuban groups in Miami that have provided financing, logistics and media support to those who have directly confronted the Cuban government.

The financing and media support for these organizations is evidence of the accumulation of strength within the framework of a battlefield that is fundamentally executed from “the cultural”. This element has been analyzed in this radiography: https://t.co/ss2F0tL1pj

Of course, it would not be the first time that so much U.S. money has gone into the pockets of non-state agents who have sought to bring about a “regime change” in the island nation. The Granma newspaper of the Cuban Communist Party published a report in which it states that nearly 250 million dollars were spent by the U.S. administrations in the last two decades for anti-Castro subversion programs.

With the imposition of the U.S. blockade, in force for more than six decades, Cuba has been able to stand on its own feet due to the strategic planning of the State to advance in social programs in several areas to give the population a respite from the untiring gringo offensive against the Cuban revolution. Last mid-June, the Díaz-Canel government reported that, according to its own estimates, the island has lost more than 9 billion dollars between April 2019 and December 2020 due to the blockade imposed by Washington.

Undoubtedly, the political operative who has given more space to the agenda of the so-called “Miami gusanera” in the corridors of the U.S. Congress and in the White House (being an important decision-maker during the Trump Administration) is Senator Marco Rubio, a Cuban-Gringo with proven connections to drug trafficking in South Florida.

On Twitter, during Sunday the 11th, he was the most enthusiastic U.S. politician to promote the pro-U.S. protests, turning his discourse to the need for the U.S. government to somehow intervene in Cuba, challenging the Biden Administration to speak out on the situation, using the hashtags #SOSCuba and #PatriayVida in more than 50 tweets and retweets that can be seen on his Twitter Timeline.

The people of #Cuba bravely took to the streets against 62 years of socialist tyranny.

12 hours after these events, President @joebiden @POTUS has said nothing about it.

But the truth is that the nonsense in the requests for a “humanitarian corridor” or “humanitarian intervention” corresponds to the interests of the most extremist sector in Florida.

At no time did the protests express their opposition to the blockade on the island, nor did any of its spokespersons, rendering invisible the cause for which there is an unprecedented health crisis in that country. Recently, in June, the United Nations General Assembly voted in favor of a resolution rejecting the embargo against Cuba, which this time obtained 184 votes in favor, only two against (the United States and Israel) and three abstentions (Colombia, Brazil and Ukraine).

The island government has been forced to ask for international donations since, due to the blockade, it has not been able to count on basic sanitary materials for the protection of the population, such as syringes, filter tips and vials. This despite the fact that its pharmaceutical industry has managed to develop five vaccine candidates, two of them (Abdala and Soberana 02) already confirmed with more than 90% effectiveness in three doses.

Ernesto Soberon, director general of Cuban Consular Affairs Residents Abroad of the Ministry of Foreign Affairs (MINREX), recalled, during a meeting with the press on Saturday, July 10, that whenever Cuba has faced a situation of this kind, it has always counted on international solidarity, either from friendly governments or from the Cuban community abroad, thanking the thousands of donations received there and not politicizing them as anti-Castro operators inside and outside the island have done, asking for some kind of foreign intervention.

“This selfless gesture has nothing to do with the false chaos that the enemies of the Cuban Revolution want to show through campaigns, which aspire to a humanitarian corridor or humanitarian intervention, concepts and terms related to events of armed conflicts and violations of international law, situations that have nothing to do with what is happening in our country,” the official said.

A humanitarian corridor, for example, is not applicable to the context in which Cuba is living, since it implies a type of temporary demilitarized zone destined to allow the safe transit of “humanitarian aid”. But such requests are generally made by the U.S. military in areas of armed conflict, so military language is an important component in understanding the interests behind such a request.

Likewise, a humanitarian corridor can be associated with a no-fly zone or as a means of supplying weapons to a besieged force. Are these the actual demands in Miami and by the population that supports Florida’s interests on the island?

The protests on Sunday, July 11, raised the idea that Cuba needs the intervention of the United States and the “international community” to bring about a “regime change”, supposedly demanded by the Cuban people themselves. The same people who have protested countless times against Washington’s economic, financial and commercial attacks, and who have been silenced and ridiculed by the same political and media operators who support the cause of the reigning leadership in South Florida.