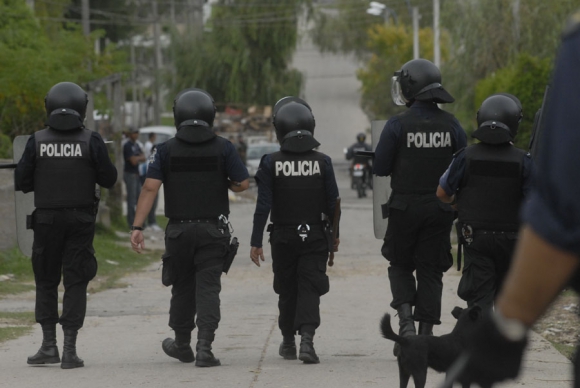 Uruguay is one of the countries with the most police per 100,000 inhabitants in Latin Latin America.

Recently, the magazine Brecha de Uruguay published an “open letter” regarding Nicaragua signed by a number of personalities of the left wing of that country. Following the same script of NATO (and its U.S. owners), it calls for the “release of imprisoned opposition candidates” and the “restitution of the rule of law” in the Land of Sandino.

In recent weeks we Nicaraguans have explained time and again that it is not a question of imprisoned “opposition candidates” but of a network of oligarchs and professional agents at the service of the destruction of the Rule of Law in Nicaragua who are paid by the United States and countries of the European Union. We have given abundant evidence of this, current and past. We have shown former Sandinistas (and for decades now brazen traitors) meeting with the worst of the Miami mafia. We have given evidence of the atrocities committed by the coup perpetrators who disguised as opposition in 2018 recorded on their own cell phones tortures, murders, desecration of corpses and many other barbaric criminal acts.

We have shown the evidence, much of it from public sources, freely accessible to anyone with sufficient acuity, of the financing on the part of the USAID and European governments to these satraps who sought to prevent the upcoming 2021 elections. We have also patiently explained how the laws work in Nicaragua and we have shown how they are proper of any State that wants to call itself sovereign. We have also made it clear that 17 parties will participate in the November 7 elections, and most of them are opposition. Those under investigation are a network that since 2008 has been dedicated to boycotting any election in Nicaragua.

In 2018 they fooled a number of people for a few weeks but very soon they revealed that what they wanted was to destroy the country. And the majority of the people in Nicaragua do not want that. We Sandinistas don’t want that, on the contrary, and the right-wing people in their great majority don’t want that either. From 2018 to the present they have not even been able to organize a kermesse, simply because they have no support. And the country is internally more stable than ever.

The politicians of the Frente Amplio of Uruguay who signed that letter cannot claim that they did not know anything about this. We have written many books, we have made documentaries, we have published hundreds and hundreds of articles, we have conducted webinars, we have explained it to them personally… Our comrades in solidarity in Uruguay (in fact, several organizations and very many militants do not feel represented by the sad letter) tell us that the leadership of the Frente Amplio has come to the conclusion that the only possible horizon for their country is “alternation” with the right wing, and that the bargaining chip for the Uruguayan bourgeoisie and the empire to leave them in peace is to hand Nicaragua over. Poor souls, vain dream… if they think this way it is because they have forgotten too many things along the way. They trample on the memory of Michellini, Erro, Arismendi, Sendic and not to mention Artigas.

As an excuse they use the ghost of a retired general, Guido Manini Ríos, who formed a fascist party that has acquired a very great influence in Uruguayan politics. Funny, Guido Manini Rios built his career largely through a toxic movement of “autoconvocados” in the countryside, much like the “autoconvocados” in Managua in 2018. There are two major differences between Uruguay and Nicaragua: The first is that we in Nicaragua are not hostages of fascist armed forces, who travel on international missions to Haiti or Africa to rape black children, but of a Police and an Army that are actually the people armed to defend sovereignty and the law. That is why (and here is the second big difference between Uruguay and the Land of Sandino and Dario) in Nicaragua the fascists did not win in 2018. But in Uruguay they do conquer social space.

The fascists in Nicaragua did not win in 2018, not only because the Police and the Army serve society rather than serve themselves, but also because here in Nicaragua, unlike the Frente Amplio, the Sandinista National Liberation Front actually did carry out the Agrarian Reform and economically empowered the people, who have resisted three uninterrupted years of economic attack by a speculative and cypaya financial bourgeoisie, who all the time ask for sanctions against the country. Because we are truly making a revolution is the reason why despite all these constant destabilizing attempts we have the best public health system, the best public education system and the best roads in Central America. Because here we work, we don’t steal. In the most sensitive area of drug trafficking in the hemisphere we have achieved that neither cartels, gangs nor laundering have established a beachhead in the country. At the epicenter of the wave of migration to the United States, Nicaragua contributes almost no migrants. Salvadorans, Hondurans and Guatemalans risk their lives and go north on foot. Why don’t Nicaraguans do it? Because here there are policies for the majorities.

The “leftist” politicians who signed that unfortunate letter, which will compromise them before history, acted in consonance with a policy that systematically seeks to make invisible what we Nicaraguans say. Not only us Sandinistas, but anyone who testifies to the obvious, that is, that this country has never had a government as competent as the one it has today. Anyone who says that Nicaragua is not a Gulag, that this is not a concentration camp with customs, that this country is not an immense collective tomb, is branded by the Party of the Empire and its cohorts as an “agent of the regime” of “Ortega” and “Murillo”. Well, let them know: here in Nicaragua “Ortega” and “Murillo” have millions of agents.

What is taking place today against Nicaragua has a very concrete antecedent in history: The campaign to demonize, isolate and invade Arbenz’s Guatemala in 1954. The Uruguayan historian Roberto García Ferreira himself, in his excellent book La CIA y los medios en Uruguay – El caso Arbenz, describes how El País of Uruguay and El Mercurio of Chile were the privileged media to “place” black propaganda (or propaganda of all colors) as part of the campaign to overthrow the popular government of Arbenz. Today the actors are more varied, highlighting the U.S. Southern Command, USAID, NED, IDI, IRI and a whole series of acronyms through which Western political financing is triangulated with exactly the same objectives as 70 years ago. Today, the privileged medium to filter this type of propaganda “on the left” is the magazine Brecha, which in addition to referring to indigenous people, the poor and people of color, does not waste an opportunity to denigrate the popular movements that in our Abya Yala conquer effective spaces of power.

It is sad that it has to be politicians descending from generations that once swore to put an end to that Uruguay, which was a servant of the interests of imperialism, who today, 70 years later, find themselves participating in the same old and worn-out script.

Fortunately, unlike Arbenz’s Guatemala in 1954, the Nicaragua of 2021 has a united people, culturally, politically and economically empowered, and with armed forces ready to defend the achievements of a society that 42 years ago put an end to the most opprobrious dictatorship in the Americas and 14 years ago, in 2007, put an end to neoliberalism and the last remnants of liberal-conservative hegemony in Nicaragua. The imperialist plan against Arbenz was to maintain the interests of “Mamita Unai”, the United Fruit Co. The imperialist plan against Nicaragua does not exist, beyond the vain attempt to destroy the country and Sandinismo. As demonstrated in 2018, the destabilization of Nicaragua is a scenario that almost no one wants to see in this region. There is the reality of war rhetoric and there is the real reality, and the latter will be the one that will prevail. The people of Nicaragua have already decided and on November 7th they will have their elections in peace and with dignity, regardless of what the Uruguayan “leftist” politicians say, who would do better trying to carry out their own historical programs instead of attacking those who have always done what they have said.