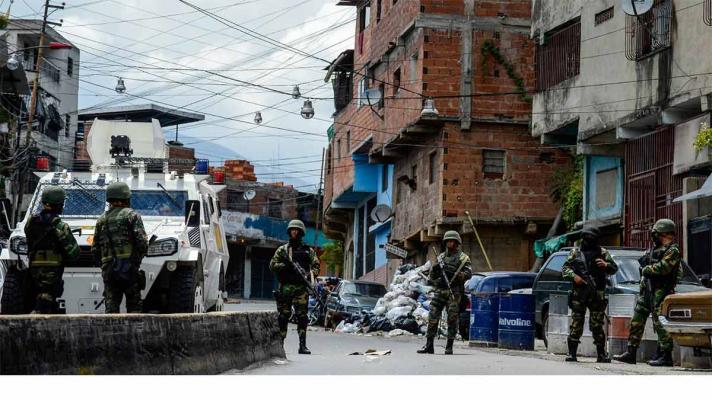 Since last Wednesday June 7 and during Thursday June 8, the capital city of Venezuela, Caracas, has been the target of important operations by armed groups, which through the facade of criminal gangs have operated in actions of terror and the generation of chaos.

These events have been carried out by gangs led by alias El Koki, alias El Garbys and alias El Vampi as the main group leaders. Criminal gangs have carried out actions to generate anxiety among the population of Cota 905, El Paraíso, Quinta Crespo and its surroundings, shooting in the air or against the civilian population and sending criminals on motorcycles and pick-up trucks, heavily armed, to other nearby sectors such as the boulevard of El Cementerio, in an attempt to mark their presence there and force people to retreat to their homes.

Social networks were filled with hundreds of tweets from residents of the area, with videos and audios of the shootings. Some people reported stray bullets bursting into their homes. Another area that was attacked by criminals on Wednesday 7 was the tunnels of El Paraíso, where they allegedly assaulted drivers passing through the area, according to Alba Ciudad.

According to the crime reporter Román Camacho, this Wednesday’s actions left three civilians dead, an assailant dead at the Cota 905 toll and seven wounded by gunshots, among them two officers. These actions continued on Thursday as well.

The methodology of the groups is particularly noteworthy. They are basically operations of intimidation and indiscriminate attacks against civilians and attacks against police bodies, without any criminal purpose other than to cause terror.

According to the information disclosed, a civilian identified as Giovanni Rafael Bracamonte was driving along the highway this Wednesday in a red Trailblazer, when he was shot at the El Paraíso tunnels.

“Bracamonte remained inside the tunnel sheltered along with other wounded people. Unfortunately he died. They are still reporting people inside the tunnels waiting to get out,” wrote Camacho on Wednesday at 10 p.m. “He is still alive. He also reported a woman killed by a stray bullet in the street of Las Tres Sirenas on Nueva Granada Ave.

The criminals also proceeded to burn a truck in the vicinity of a city tunnel.

Police response and fabrication of a “political” event

Since early Thursday morning, the Venezuelan security forces have been deployed to contain the violence. At the highest level, the Minister of Interior, Justice and Peace, Carmen Melendez, announced actions to secure the area and restricted vehicular traffic in some important roads of Caracas.

The Minister referred to the “deployment of a new operation for the protection and safeguarding of our people in Caracas, specifically in the parishes of La Vega, Santa Rosalía, El Paraíso, San Juan and El Valle”.

“The State Security Agencies continue to be deployed in the areas that are vulnerable to these criminals and will not rest until they regain absolute control”, he added.

The call is to remain in safety, keep calm and trust in our State security institutions, as well as to disregard false information and rumors, as they are part of the aggression against the Citizen Peace

However, in view of the seizure of the accesses to the areas where the terrorist groups were barricaded, information emerged that these groups intimidated the local population, using them as “human shields”, ordering them to gather and go down to the accesses of their communities in supposed rejection to the police actions.

The strategy would have a double purpose. On the one hand, to delay the access of the police forces to the areas in question and thereby distract and facilitate the escape of the leaders of the armed groups, and at the same time turn the situation into a political event, where there was no lack of accusations against the Venezuelan government and arguments regarding Human Rights.

The uniqueness, congruence and timeliness of the armed offensive

The reaction of these armed groups has had special singularity, since it is not just another reaction of groups against the security organs. In fact, due to its characteristics, this armed attack is clearly coherent with the fabrication of a terrorist scenario, due to the type of indiscriminate force that has been used, and the context.

This Thursday, a European Union (EU) exploratory mission arrived to study the situation in the country in order to determine whether or not the EU will send an electoral observation mission for the mega-elections in November.

The mission must determine essential conditions in the process leading up to the elections, the institutional functioning and the position of the political organizations in the country. But additionally, one of the elements to be highlighted in the observation will be the security conditions for the eventual observation team.

The EU Exploratory Mission will focus on determining if there are political and security conditions to deploy an Electoral Observation Mission (EU-EOM) on #21N.

The forcefulness of the armed onslaught maintains a clear sense of orchestration, to fabricate the existence of a “failed state” in the country before the visiting mission.

Additionally, there are political factors that have used the events to stir up, in some cases, using them as an element of provocation and instigating the use of military force by the Venezuelan State in the populous communities. Such was the case of Juan Guaidó, accused by the Venezuelan State of financing and supporting these groups.

Meanwhile, Freddy Guevara made a statement in which he tacitly indicated that only by yielding to the demands of the Venezuelan opposition would there be a pacification of the armed operations, both in the capital city and in the south of the country.

What does the National Salvation Agreement have to do with this mega drama that is taking place in CCS with the armed gangs, Apure and the Mining Arc?

Everything: only with a political agreement endorsed by the international community will the State be able to regain territorial control of the country.

Guevara has established a subordination of the use of force by the armed gangs to the result of the political pressures against the Venezuelan government and which are covertly presented in the so-called “National Salvation Agreement” proposed by Juan Guaidó and backed by the U.S. government.

Basically, Guevara transforms these armed groups into belligerent political actors, giving them a role in an insurrectional scenario rendering them pieces of the political negotiation. The opposition is also playing public relations in the Venezuelan state’s anti-terrorist campaign.

The level of synchronicity and timeliness of these events is a significant and manufactured risk that, under these circumstances, the visiting exploratory mission may claim reasons that “justify” again the non-accompaniment and observation of the EU in other elections in Venezuela, such as those that will take place in November.

This possibility is pointed out by the anti-Chavista electoral expert Eugenio Martínez, who in the past participated together with the Democratic Unity Table (MUD) in negotiations with Chavism. Martínez pointed out from his Twitter account: “And in the midst of the shooting in Cota 905 and the terror generated in the city… the EU Exploratory Mission arrived in Caracas, that, among other things, must evaluate the security risks in order to deploy an Electoral Observation Mission in November”, he indicated.

And in the midst of the shooting in Cota 905 and the terror it generates in the city… the EU Exploratory Mission arrives in Caracas, which among other things must evaluate the security risks to deploy an Electoral Observation Mission in November.

The decision potentially adverse to Venezuela, which could be generated by the EU theoretically supported by the events manufactured in Caracas. If so, it would not be congruent with other contexts where elections are held under conditions of real insecurity and there are no questions from the EU.

Such is the case of México, where on the eve of the recent elections, 70 homicides of people linked to the 2020-2021 electoral process were reported, of which 28 were candidates or aspirants to different public offices, events that took place in areas widely controlled by armed groups and drug trafficking structures.

However, and as far as Venezuela is concerned, for national politics in its highest spheres, in Caracas right now not only tranquility and citizen security are being disputed, but also key conditions for an accompaniment and observation of the elections in Venezuela, which will be an indisputable factor for the linking of these upcoming elections to a process of crumbling of the consensus around the blockade and the pressures against Venezuela.

Understanding the need of Venezuelan political actors to accelerate the processes of regularization of politics in the country, among Chavism and among opposition sectors not aligned to Guaidó, there is a clear consensus that the upcoming elections must have international backing in which the EU is a key factor.

The political statement around the armed movements registered in Caracas have the underlying denominator that there are sectors aligned to the US strategy of regime change (Guaidó-López), committed to impose a breakdown of the electoral conditions by way of highly armed criminal force and with terrorist tactics.

These sectors are the primary ones interested in the non-recognition of the real electoral and political conditions of the country and are the main beneficiaries of the “failed state” thesis. Hence, this explains how they have generated a narrative that is politically functional to the armed attack, creating a space of congruence and opportunity.