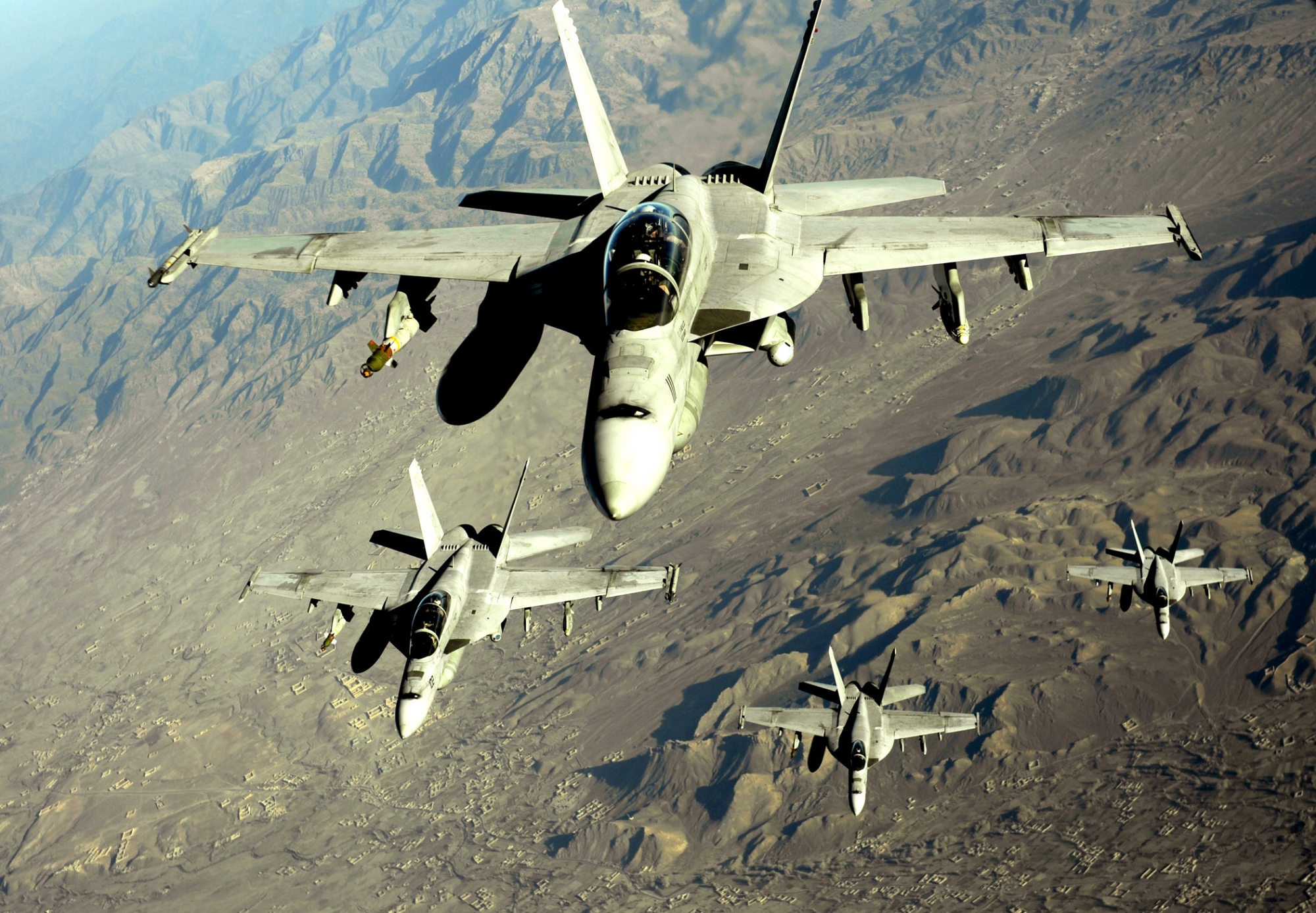 U.S. jets bombing Afghanistan. These attacks will not end despite the formal U.S. withdrawal by September 11th. [Source: wired.com]

After 20 Years, America’s “Longest War” Is Not Really Ending

On July 2nd, fleeing questions from reporters about U.S. plans in Afghanistan, President Joe Biden sought refuge behind the July 4th Independence Day holiday. Yet he obliquely acknowledged that the U.S. will use some level of “over-the-horizon” air attacks to prevent the Taliban from taking power, attacks that will include drones and manned aircraft, possibly even B-52s.

Here is a portion of President Biden’s remarkable exchange with the press, which occurred at the close of his comments on the June 2021 jobs report:

Q    Are you worried that the Afghan government might fall?  I mean, we are hearing about how the Taliban is taking more and more districts.

THE PRESIDENT:  Look, we were in that war for 20 years.  Twenty years.  And I think — I met with the Afghan government here in the White House, in the Oval.  I think they have the capacity to be able to sustain the government.  There are going to have to be, down the road, more negotiations, I suspect.  But I am — I am concerned that they deal with the internal issues that they have to be able to generate the kind of support they need nationwide to maintain the government.

THE PRESIDENT:  I want to talk about happy things, man.

Q    If there is evidence that Kabul is threatened, which some of the intelligence reports have suggested it could be in six months or thereabout, do you think you’ve got the capability to help provide any kind of air support, military support to them to keep the capital safe, even if the U.S. troops are obviously fully out by that time?

THE PRESIDENT:  We have worked out an over-the-horizon capacity that we can be value added, but the Afghans are going to have to be able to do it themselves with the Air Force they have, which we’re helping them maintain.

THE PRESIDENT:  I’m not going to answer any more quick question on Afghanistan.

When the President refers to “over-the-horizon capacity that we can be value added,” he is referring to a plan, that appears might cost $10 billion, to fly drones and manned attack aircraft from bases as far away as Qatar, the United Arab Emirates and Kuwait to assist the current Afghan central government in defending itself against the Taliban.

His statement is the first acknowledgment that the “over-the-horizon” air operations, that reportedly may rely very heavily on drone assassination and drone targeting for manned aircraft, will be directed at the Taliban.

In congressional testimony in June, Defense Secretary Lloyd Austin said that “over-the-horizon” operations would focus on “elements that can possibly conduct attacks against our homeland,” suggesting Al Qaeda and ISIS as targets but not foreclosing attacks against the Taliban.

The President’s remarks about “over the horizon” as “value added” flowing into “but the Afghans are going to have to be able to do it themselves with the Air Force they have,” is reminiscent of former President Richard Nixon’s attempt to argue that the puppet government of Vietnam was developing the power to defend itself, attempting to cover U.S. tracks out of the horribly disastrous U.S. colonization project in Vietnam.

“Our air strikes have been essential in protecting our own remaining forces and in assisting the South Vietnamese in their efforts to protect their homes and their country from a Communist takeover,” Nixon said in a 1972 speech to the nation.

The apparent U.S. decision to continue to assist the Afghan central government from the air comes in company with a New York Times report saying that President Biden has placed “temporary limits on counterterrorism drone strikes and commando raids outside conventional battlefield zones like Afghanistan and Syria, and it has begun a broad review of whether to tighten Trump-era rules for such operations, according to officials.”

A similar report in Foreign Affairs says that there has been an apparent reduction in U.S. drone attacks, and details elements of a “bigger rethink” process that the Biden administration is said to be going through to limit civilian deaths and reevaluate how the U.S. should respond to “the overseas terrorist threat.” A goal of the administration, the report says, is to end the U.S. “forever” wars.

It must also be said, however, that these reports indicate that President Biden fully intends to continue the U.S. drone assassination/pre-emptive killing policy of Bush, Obama and Trump, possibly with more care for civilian casualties but in defiance of international principles of war, as outlined on BanKillerDrones.org, that would rule out the use of weaponized drones and military drone surveillance altogether whether inside or outside a recognized combat zone.

It appears that the reformist talk from Biden officials, much of it unattributed and therefore having no accountability, is intended to divert and placate those of us citizens who are repulsed by continuing drone atrocities, such as those leading 113 peace, justice and humanitarian organizations which signed a letter demanding “an end to the unlawful program of lethal strikes outside any recognized battlefield, including through the use of drones.”

Apart from the view, noted above, that drone attacks and surveillance are illegal anywhere, we have to question the U.S. having turned the entire world into a potential “recognized battlefield.”

Even though U.S. ground forces have largely left Afghanistan, it is clear that the Biden administration considers Afghanistan a legitimate battlefield for U.S. air forces.

In President Biden’s “value-added” remark, one can see a clear message: Regardless of talk of a more humanitarian policy of drone killing and ending “forever” wars, the president has decided that prolonged civil war in Afghanistan is in the interest of the U.S.

Possibly this is because continued turmoil in Afghanistan will be unsettling and preoccupying to her neighbors, Iran, Pakistan, Russia and China. Possibly it is because a civil war will make it easier for corporations and banks to exploit Afghanistan’s mineral, fossil fuel and opium wealth.

With continuing U.S. air and commando attacks, Afghanistan can turn into a Libya, a divided, stalemated, suffering, bleeding country, where Turkey, Russia and China test their weapons and seek advantage.

Indeed, the U.S. is negotiating with Turkey, over the objection of the Taliban, to maintain “security” at the Kabul International Airport.

Undoubtedly, the Turkish political/military/ corporate elite, who have their own expansionary ambitions, will use its drones, among them the semi-autonomous Kargu 2, to try to hold the airport and surrounding territory.

The Black Alliance for Peace released a statement on June 25 opposing “any effort to prolong the U.S. war on the Afghan people, including efforts to keep the United States engaged in any form in Afghanistan.”

The statement expressed concern for “the continued operation of U.S. special forces and mercenaries (or contractors) in Afghanistan, as well as U.S.-pledged support for Turkish military defense of Kabul International Airport, a site that has continued to be a major U.S. military stronghold to support its imperial presence.”

President Biden would do well to heed this statement, along with a petition to him, circulated by BanKillerDrones.org, urging no further U.S. air attacks against the Afghan people.

Now that Independence Day has passed, perhaps the President will be more willing to answer questions about the real goals of “over the horizon.”

Nick Mottern Co-coordinates BanKillerDrones.com and is Coordinator of Knowdrones.com. Nick can be reached at nickmottern@gmail.com.