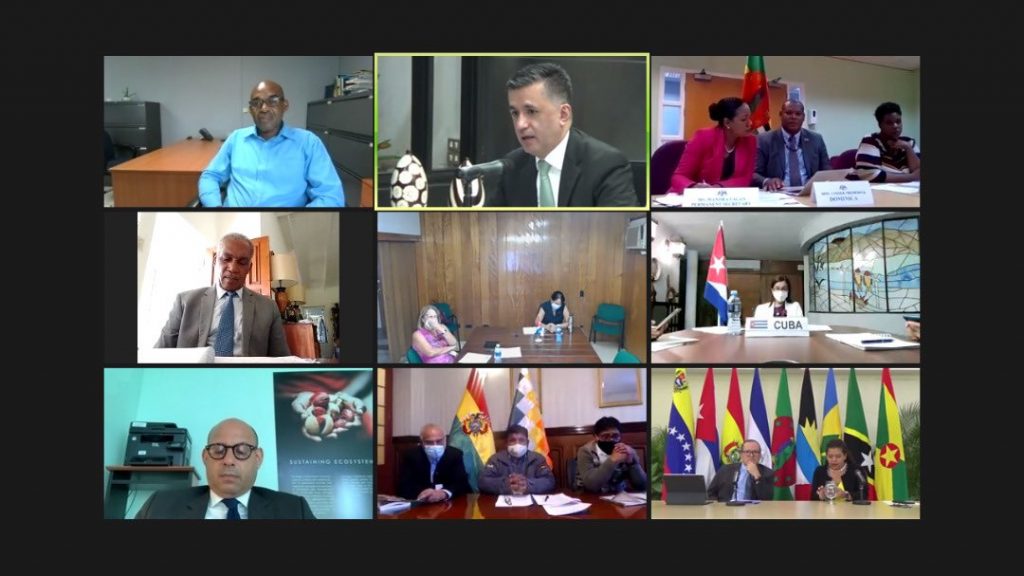 ALBA-TCP Ministers and High-level Authorities on Environment met to coordinate joint actions in the fight against Climate Change. July 7, 2021.

Today, the Bolivarian Alliance for the Peoples of Our America (ALBA-TCP) held a meeting of Environment Ministers of its member states to plan for a people’s climate summit that will draw up proposals for the UN Climate Change Conference (COP26) in November. Meeting participants agreed to convene in Venezuela, which will be followed by a people’s conference in Cochabamba, Bolivia.

The people’s conference “will count with the participation of groups particularly vulnerable to climate change; youth, women and indigenous peoples of the world, with the aim of adopting a declaration with a view to the COP 26 of Glasgow,” said ALBA General Secretary, Sacha Llorenti.

Participating Environment Ministers stressed the need for proposals outside the traditional free market solutions that have failed to challenge the crisis.

Bolivia’s Minister for Environment and Water told the meeting that, “The climate crisis is one of the great challenges of our times, it threatens the existence of life on the planet and is a product of the capitalist system…We reject the vision of the market and the green economy. The Paris Agreement is market-based”.

.@SachaLlorenti: The @ALBATCP approved a roadmap towards the Glasgow Climate Change Conference (COP 26).
With concrete proposals for joint work, we will face the challenge of defending peoples from the devastating effects of the climate crisis.https://t.co/h6fdR8gARv

Today’s meeting agreed on constructing the following path towards a people’s climate conference:

– Participate in COP26 with a clear joint position, product of the conference which will consolidate the proposals of the technical and political commissions of the member states.

– Carry out, in the second week of July, five days of work between technical and political teams of negotiators from the ALBA countries, under the leadership of the heads of delegation to evaluate and consolidate an ALBA-TCP position with a view to carrying out the COP26 in Glasgow.

– Set up, before August 5, 2021, a youth and climate change team, drawn from ALBA countries to articulate a joint position on environmental issues.

– Develop, in August, an exchange between academics and experts from ALBA countries to generate a position proposal on the impact of economic sanctions and how they impede the implementation of the “Paris Agreement”.

– Hold, in September, a meeting of the heads of delegation to the United Nations with extra-regional partners, so as to promote coordination on the development of a climate change position.

– Celebrate, in August, the second “Reencounter with Mother Earth International Forum” in Caracas, Venezuela, in order to adopt a declaration of ALBA-TCP on the Global South’s vision for the protection and defense of Mother Earth.

– Celebrate, in October, the “Third People’s Summit” in Tiquipaya (Cochabamba, Bolivia), to make an urgent call to avoid climate collapse.

Tiquipaya is the site of the historic World People’s Conference on Climate Change of 2010, led by Evo Morales, which was attended by 30,000 people from social movements of 100 countries. It was at this summit that the Universal Declaration on the Rights of Mother Earth was published, and from which important proposals emerged such as those around the climate debt owed by imperialist countries to the Global South.