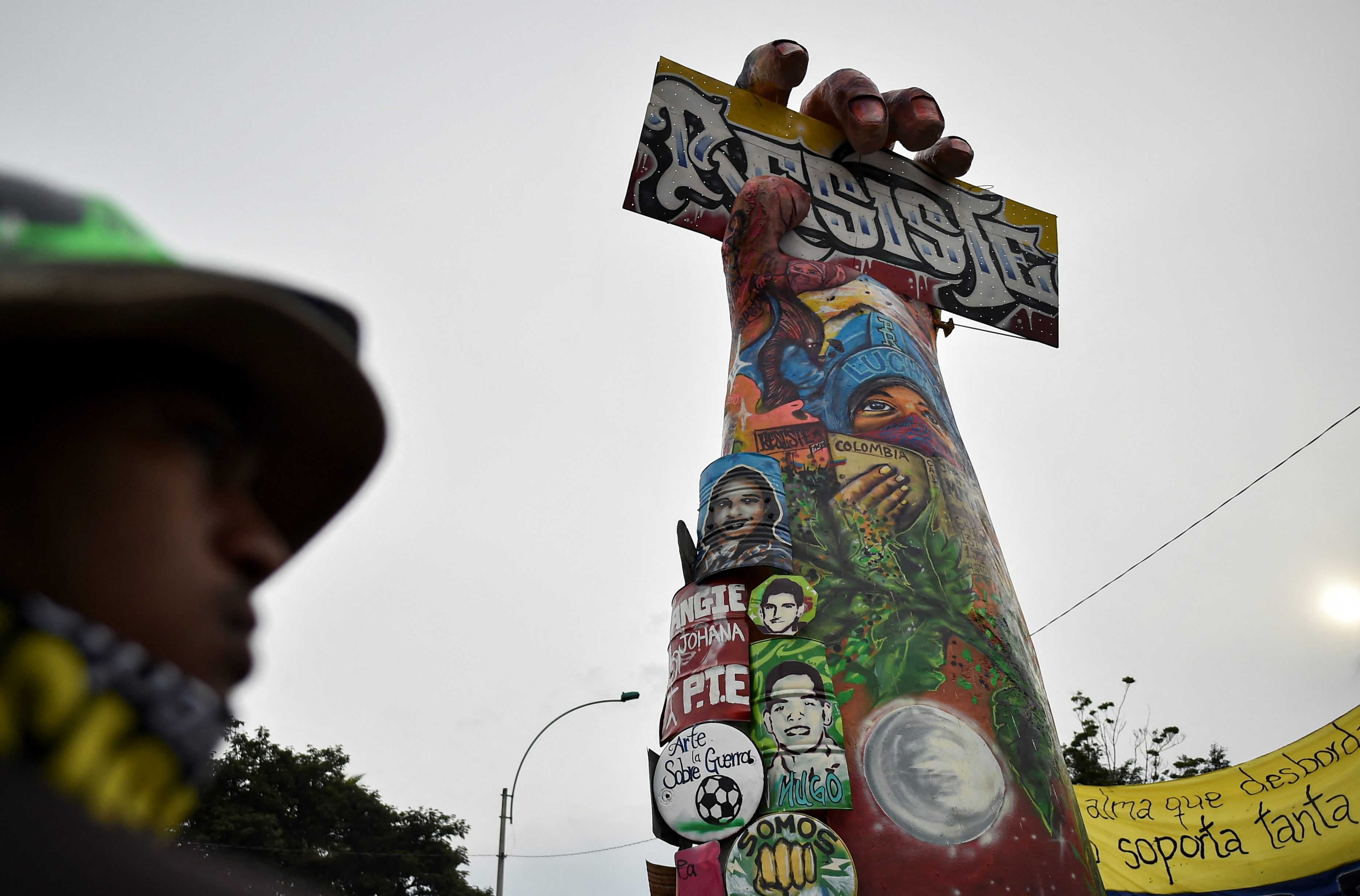 A REGIME THIRSTY FOR REVENGE

Through its local agents, the regime of Iván Duque launched a ferocious campaign of revenge against the youth and the communities of Cali that have resisted in the streets and neighborhoods during the two months of the National Strike, which ended this Monday, June 28, 2021.

The most treacherous of these operations began at four o’clock in the morning of Saturday, June 26, when an impressive contingent estimated at one thousand men of combined Army and Police forces raided Puerto Resistencia, in the southeast of the city, to try to destroy this center of youth and popular struggle, which has become an example of militancy and persistence in the strike.

The commander of the Metropolitan Police, Brigadier General Juan Carlos León, launched all kinds of accusations and accusations against this epicenter of popular struggle in Cali, even the most implausible, and the Secretary of “Security and Justice” of the Mayor’s Office, Carlos Javier Soler, a retired colonel recently appointed to the post, appeared unusually with a gun at his belt, as if he were part of the armed operation, in an attitude of provocation that provoked the repudiation of thousands of Cali residents.

Just after the operation began, and after finding nothing of what they were apparently looking for to satiate their judicial vengeance against the community at the site, General Leon, without having the authority to do so, announced that the Monument to the Resistance, erected in homage to the dozens of victims of the regime’s repression against the youth, would be demolished.

The monument, inaugurated on Sunday, June 13, 2021, is a collective work in which dozens of artists and people from the Cali community participated, it is also a legacy that transcends the borders of Cali and has become a symbol of the National Strike and solidarity throughout Colombia and Latin America.

The announcement of the Police Commander revealed the intentions of the ruling class of the capital of Valle del Cauca, which despises popular sentiment, which has generated an atmosphere of stigmatization against youth protest and now promotes, through new pro-Uribe officials appointed by Mayor Jorge Ivan Ospina to ingratiate himself with the ultra-right, the criminalization of protest.

Undoubtedly, the war deployment against Puerto Resistencia, with men in camouflage carrying rifles and machine guns, accompanied by tanks, drones and helicopter overflights in the darkness of the early morning hours of Saturday morning, had all the intentions of generating terror among the population and to give the sensation of subjugation of a community to the satisfaction of the most reactionary gallery of the city, which every day, using its traditional mass media, demanded the removal of the centers of youth resistance at any cost, with blood and fire if necessary.

But the operation constituted a defeat for that rancid Cali oligarchy, whose disproportionate armed police and military apparatus found neither the “arsenals” they expected to discredit the resistance, nor the “nests” of delinquency with which they have all the time misinformed and tried to discredit the popular struggle.

On the contrary, the organizers of the operation received massive repudiation from the residents of the neighborhoods surrounding this large popular sector of the southeast of Cali, who did not hesitate to go to the occupiers of their territory to rebuke them for their actions.

“Don’t mess with our monument, we will defend it from beginning to end, it is a construction of the whole community and you have no authority to demolish it”, said the people who were awakened by the war drums of hundreds of men invading a territory of struggle and resistance.

“Out, out, out!”, shouted the community that got up early to defend not only the Monument to the Resistance but also the space of solidarity maintained throughout the two months of the Strike, to the contingents of the Armed Forces and the bureaucracy of the Cali Mayor’s Office.

The rejection of the population was of such magnitude that Mayor Ospina had no choice but to make a statement denying that the order to destroy the monument had been given, although it was evident that it was the popular response that defeated the provocation and the oligarchic vengeance in Puerto Resistencia, despite the planned aggression.

THE SECRETARY WITH THE GUN

In view of the appearance in Puerto Resistencia of the Secretary of “Security and Justice” with a pistol at his belt, like a gringo sheriff, there were numerous pronouncements of rejection. “A public official should not intimidate citizens by brandishing a weapon, even less in a place of social protest that was the victim of a police and army assault where he should be prudent, which he was not when he exhibited himself in an aggressive manner”, declared Alberto Jairo Palomino, political and social leader in Cali.

In rejection of the provocative act of the official, jurist Armando Palau Aldana also mentioned that “the permit to carry arms is suspended from January 1, 2021 until December 31, 2021 by Decree 1808 of 2020”, and reiterated that, consequently, Soler violated the prohibition issued by the same government of which he is the emissary in Cali.

For his part, James Larrea, human rights defender, argued that it is unacceptable that “a secretary or other official in the exercise of his duties, provides his services with a pistol at his belt and with the intention of brandishing it at the slightest opportunity”.

“The unequivocal message is that the Ospina government supports the collaboration of armed civilians in repressive actions by the police,” said former prosecutor José Élmer Montaña, who stressed that “at a time when we have outbreaks of paramilitarism in the south of the city, this encourages the formation of this type of organization”.

The Union of Resistance of Cali, URC, issued a statement demanding the resignation of Carlos Javier Soler as Secretary of “Security and Justice”, and explained that the official’s position “will not allow us to achieve a dialogue and peaceful solution to the reality of this situation in the city. The strike continues, our permanent assemblies will continue, our struggle is in the streets and we demand guarantees for the exercise of our constitutional right”.

On Monday, June 21, the police, using the Esmad and another of their favorite squads in the repression 2021, the Goes (Special Operations Groups), attacked the youth of Puerto Resistencia in the afternoon and evening, especially in the vicinity of the Villa del Sur neighborhood.

During the repression, dozens of inhabitants of the surrounding neighborhoods were affected by tear gas, stun grenades and the roar of the firearms fired by the police.

The day left another young man murdered, identified as Juan Carlos Arce, a tragic fact that increased the number of homicides against participants in the Paro to 46 in Cali and 60 in the whole Valle del Cauca.

And while this was happening in Cali, in other parts of the country there were more homicides perpetrated by the security forces while repressing protest, such as in Bogotá, where Jaime Alfonso Fandiño, in Usme, and Edward Castillo were killed by official bullets.

The revenge against the youth resistance undertaken by the repressive apparatus of the State, through the Attorney General’s Office and the Armed Forces, includes arrests of young people who are accused of all manner of crimes, in a classist and selective application of supposed “justice”, in Cali and Yumbo.

One of the detainees is Yeison Fabián Muñoz Narváez, whose family reports that he is a young man who is being prosecuted for a crime he did not commit in the events of May 28 in the La Luna sector, where an agent of the Attorney General’s Office perished after the officer killed two demonstrators. The relatives of the young Muñoz request solidarity from the Cali community and legal assistance.

Meanwhile, from Yumbo, the Municipal Committee of the National Strike denounced the capture of three protest activists in the Juan Pablo II neighborhood, identified as José James Cabezas Quiñones, Sebastián Neuta and Diego Luis Tascón, and maintained that the Sijin of the Police constructed a judicial set-up through an alleged anonymous witness to accuse the detainees of injuries against an agent who on April 29 publicly shot at the participants in the Strike, in the neighborhood of La Estancia.

“As happened with our fellow demonstrators in the town of Dapa, this is a new set-up by the National Police to criminalize social protest in Colombia,” said the Committee.

Resistance has been accompanied not only by the perseverance of young people in the streets, but also by the efforts of prominent social leaders and jurists, who have transmitted their knowledge and experience to the new generations of fighters.

Two examples illustrate the above: the first is that of Rodrigo Vargas Becerra, president of the Permanent Committee for the Defense of Human Rights in Yumbo, veteran social leader who was formed in the workers’ struggles of the eighties and nineties and who has been throughout the two months of the Paro de 2021 at the side of the boys expressing his solidarity and shedding light on the future of the social struggle.

Vargas Becerra succeeded in having a writ of protection he filed demanding respect for the right to protest approved by a court ruling, and has also just succeeded in having judicial authority demand that the mayor of Yumbo and the governor of Valle comply with the writ, otherwise the corresponding sanction of contempt will be applied.

Another example is that of attorney Armando Palau Aldana, an expert in environmental and administrative law and member of the American Association of Jurists, who has been advising the Union of Resistances of Cali in an altruistic and supportive manner.

On Monday, June 28, Palau Aldana was successful in getting the Administrative Court of Valle del Cauca to issue a ruling by which “the fundamental rights to public and peaceful protest as well as the due process of the plaintiffs, the Union of Resistances Cali” were “protected” and, consequently, “the order of the 16th Administrative Judge of Cali to suspend the District Decree 304 of 2021 that adopted guarantees for the construction of agreements” and institutionalized the dialogue table was left “without effect”.

“The Court considered that the suspension ordered by Judge 16 does not have sufficient constitutional support at an early stage of the nullity process and the limitation of rights and interests that it entails is more burdensome for the fundamental rights of all persons who want to join the dialogue within the framework of the conflict,” explained Palau Aldana.

Thus, in Valle del Cauca resistance is also expressed in the legal struggle, which supports the peaceful protest of the youth and the people who continue in the National Strike.