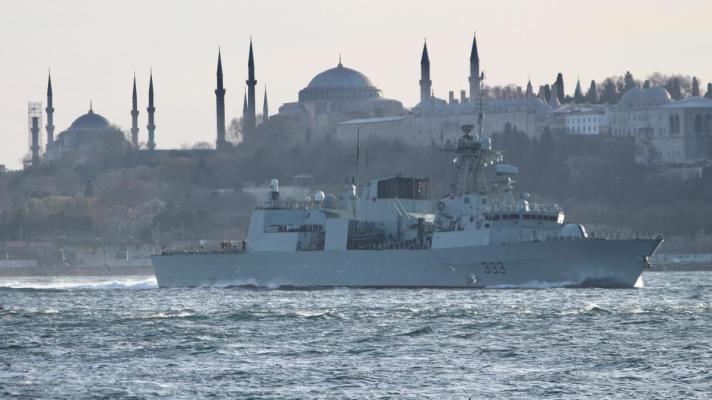 It is not the first time that the countries that make up the North Atlantic Treaty Organization (NATO) have sailed the Black Sea with the intention of conducting provocative operations against Russia. Days ago they resumed the tactic, violating sovereignty in Russia’s territorial waters, this time by the hand of the United Kingdom, when a warship, the HMS Defender, began its navigation near the Crimean peninsula.

NATO military exercises, known as “Sea Breeze”, have been conducted since 1997 in these waters and are coordinated by NATO’s Standing Maritime Group 2 (SNMG2).

Sea Breeze as a provocative act

A week ago, a bilateral meeting was scheduled between Russian President Vladimir Putin and his American counterpart, Joe Biden, and despite the marked differences and the fact that the Ukraine issue was the high point of the conversation between the two leaders, the political outcome was focused on reinstalling their respective ambassadors, taking a first step, through diplomatic channels, to lower tensions between the two nations.

The Crimean peninsula, integrated to Russia in 2014, should be considered the Russian watchtower that warns about approaching threats; and being the controversial point between the West and Russia, some NATO countries have made of the maritime route a contentious dispute.

It is on this basis that the recent provocation began, the British warship HMS Defender sailed for more than an hour in Russian territorial waters in the Crimean peninsula, within the 12-mile limit on a direct route between the Ukrainian port of Odessa and Georgia. 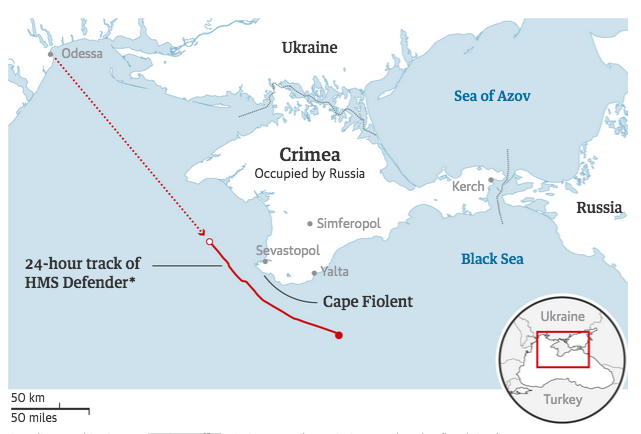 The Russian Ministry of Defense initially claimed that warning shots were fired at the British HMS Defender to force the destroyer to leave the area.

Following the warning shots, Ben Wallace, the UK defense secretary, claimed that the HMS Defender was conducting a “routine transit from Odessa to Georgia across the Black Sea” using an “internationally recognized traffic separation corridor,” while stoking geopolitical tensions.

Wallace’s last sentence makes clear the UK’s non-recognition of the Russian annexation of Crimea, a fact that was voted by the Crimean citizens themselves.

At the same time, British Prime Minister Boris Johnson confirmed that this deployment was in solidarity with Ukraine and that the important point is that they do not recognize the Russian annexation of Crimea. Johnson even reaffirmed: “We do not recognize the annexation of Crimea, it was illegal, those are Ukrainian waters and it was absolutely right to use them to get from point A to point B”.

Later, the Russian ambassador to the United Kingdom, Andrei Kelin, informed that the HMS Defender did not respond to the warnings and assured that it was not an overtly aggressive act, and that Russia had the right to defend its territory, i.e. it is not a question of the transit of that warship through the Black Sea, but that it sailed through Russian territorial waters without permission or warning, a military mistake if ever there was one.

Apart from the above, a number of events in April last year were an indication of what was going to happen in the coming months:

In addition to this, in Moscow the UK Ambassador Deborah Bronnert was summoned by the Russian Foreign Ministry and special emphasis was placed on the fact that, in case of a repetition of such provocations, all the responsibility for the possible consequences will fall entirely on the British side.

Among the latest statements of this provocative action by the UK, Wallace also presented a different version of events, excusing himself on the grounds that the HMS Defender made an “innocent passage” through Ukrainian territorial waters by means of a traffic separation scheme, he said in a written statement to parliament.

“Innocent passage” is an internationally recognized right for ships to sail through a country’s territorial waters as long as it does not mean any harm, and in this case it is a warship that sailed without permission, which from a military perspective, apart from being a provocative action to Russia, is also a test probe to know Russia’s determination on defending its sovereignty, maritime in this case.

The threat in the Black Sea shows how the UK was deliberately trying to provoke an international security incident with Russia, thus undermining any intention to ease geopolitical tensions. It may well be the UK acting as a free agent to undermine any alliance initiative with Russia, or behind the scenes, acting as an emissary of the United States to hinder what has been publicly agreed, and thus generate the relevant excuses in order to delay diplomacy efforts with Russia.

Now, other geopolitical events add to the UK’s intention to undermine Russia’s cooperative efforts with Europe and recently with the United States:

From the political point of view, the warlike action appears to be executed with the intention of sabotaging not only the recent rapprochement between the United States and Russia, in which both presidents agreed to reduce tensions between their countries and to manage the comprehensive competition between them in a more responsible manner, but also the strengthening of relations between Europe, with Germany at the forefront, and Russia.

According to how the events unfold, and the possible deep plot behind the scenes on the part of the West, one may quote Sun Tzu’s The Art of War:

“If the enemy’s emissaries utter humble words while the enemy increases his preparations for war, this means that he is going to advance…if the emissaries come asking for peace without signing a treaty, it means that they are hatching some plot…when the adversary is far away but tries to provoke hostilities, he wants you to advance.”

Recently, Russian Deputy Foreign Minister Sergey Riabkov spoke out about this incident in the Black Sea, explaining that this warship is used by both the United States and the United Kingdom. Riyabkov also denounced that these countries are misrepresenting what happened, despite the videos published by Russia showing the conversations between the Russian coast guard making the warnings and the command crew of the British warship.

Former Western empires are desperately seeking a predominant place in the new configuration of international relations, in the face of the mutation of new geopolitical platforms, having as their pivot great nations such as Russia and China, two great mirrors in which the convalescent Western hegemony looks terrified and fearful.

Nevertheless, politics have no need of barricades to exist.