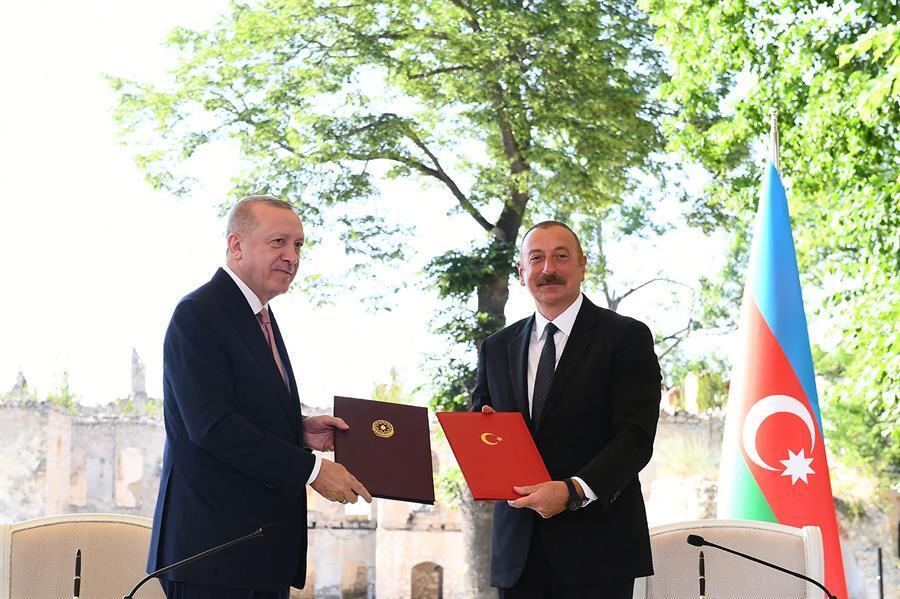 Immediately after leaving the NATO summit in Brussels, where he met with U.S. President Joe Biden to discuss Afghanistan, Libya and Syria, Turkish President Recep Tayyip Erdoğan met with Azerbaijan President İlham Aliyev in the city of Shusha, captured from Nagorno-Karabakh by Azerbaijan in last year’s 44-day war.

The Turkish press today reports the leaders of the two countries that call themselves “one nation, two states” signed an alliance protocol that goes far toward making the second half of that designation redundant. Turkey’s Hürriyet states the two signed the alliance agreement to “further strengthen their ties following the latter’s [Azerbaijan’s] victory in Nagorno-Karabakh that liberated occupied Azeri lands from Armenian occupation.”

Aliyev expressed gratitude to his sponsor, the leader of NATO’s second-largest military power, for his assistance in waging the lopsided war last year: Nagorno-Karabakh had a pre-war population of 145,000. Azerbaijan and Turkey have a combined population of 95 million. Erdoğan attended the victory (if one can call it that) ceremony in the Azerbaijani capital of Baku in December, where he read a poem denouncing the alleged seizure of Azeri land by Iran and Russia in the 19th century, leading to a diplomatic contretemps with Iran. (Among pan-Turkic ideologues like Erdoğan and Aliyev, parts of Iran are referred to as South Azerbaijan, as parts of northern Afghanistan are called South Turkestan, recently by Turkish proxy Abdul Rashid Dostum.)

Referring to the eponymous initiative, Erdoğan told the press corps brought in for the occasion: “With the Shusha Protocol, we have determined the road map of our relations in the new term. It’s very important that this protocol has been materialized in Shusha. This protocol contains a lot of aspects of our relations as well as the vision in regards to our region.” Note the collective pronouns used four times. Nagorno-Karabakh and behind it Armenia are now Turkey’s self-identified region for the first time since World War I.

He also announced that Turkey will open a consulate in the conquered city, adding, “We will also contribute to Azerbaijan’s efforts to reconstruct the region in the way we did for the liberation of its territories.” That is as candid an admission that the “guardian of NATO’s southern flank,” the nation praised in the military bloc’s communique of yesterday, played a direct role in a war of aggression in the South Caucasus.

Turkey’s Daily Sabah reports that the two heads of state toured other parts of Nagorno-Karabakh; as the newspaper phrased it, they visited Shusha “as well as other liberated areas in a show of solidarity and the strong historical ties between the two countries.”

President Aliyev, who earlier this year touted his and Turkey’s victory against Nagorno-Karabakh as a victory for the whole Turkic world*, said that “the Nagorno-Karabakh conflict showed the whole world the unity of Ankara and Baku.” At least it should have demonstrated that fact. Most of the world, especially Russia, doesn’t see that or pretends not to. Among other reasons for the latter nation to be concerned, Turkey strongly advocates and supports the “liberation” of “occupied” Crimea, Donetsk, Lugansk, Abkhazia and South Ossetia – allegedly from Russia. It has recently supplied the Bayraktar TB2s drones it used against Nagorno-Karabakh and Armenia to Ukraine to be used against Russian-speakers and Russian allies in the Donbass.

The meeting of the two victors on conquered land was heralded by the Azerbaijani president at the dawn of a pan-Turkic superstate: “A new era starts today.”Readers will have anticipated the fact that the main manifestation of Turkish-Azerbaijani cooperation is, in addition to pan-Turkic expansion though entirely hand-in-glove with it, the creation of a joint military capability that can achieve dominance in the Caucasus-Caspian region. Last year’s war was the opening salvo in that campaign.Today Aliyev, speaking of the memorandum of understanding that is tantamount to a formal military alliance, said: “Our cooperation in the defense industry as well as mutual military aid are especially underlined in this document.”