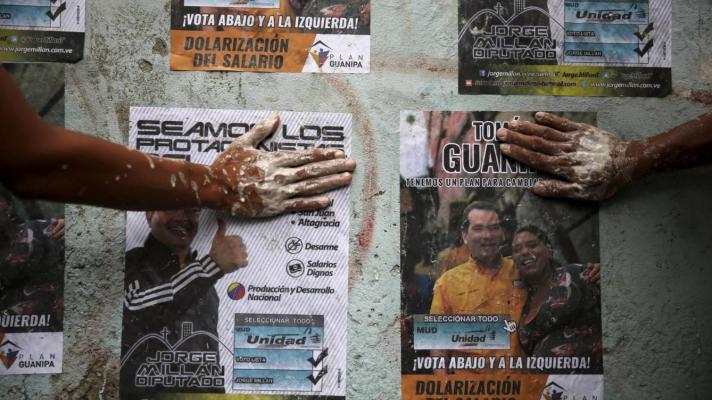 There is an urgent need for a generational renewal of the opposition, which has bet on a low-intensity civil war to take power (Photo: Reuters)

Venezuela has definitely entered a new electoral race with the announcement of the recently constituted National Electoral Council (CNE), which has scheduled the regional and municipal elections stipulated by the Constitution for November 21, 2021.

The announcement, as so often before, imposed the well-known dilemma to the opposition current dominated by Juan Guaidó between participating or abstaining, although in this opportunity the nuance that should be noted is that the Biden administration, in a change of approach to the Venezuelan front, seems inclined to push for the participation of a sector that has made abstention its main political resource.

The movement in this direction was also fueled by the position of the European Union (EU), which qualified the election of the new CNE as a “first step” towards the political normalization of the country, since 2 of the 5 main rectors of the institution are from the opposition camp.

Beyond the “National Salvation Agreement” launched by Guaidó, perhaps the last bullet left in his revolver to gain political advantage by using the US “sanctions” as an extortion tool, the regional elections will take place and will most likely exacerbate the paradoxes accumulated by the failed cycle of regime change on the external front.

Elections in Venezuela, conditioned by external pressures and destabilization strategies, present the particularity of masking in the rites of representative democracy what in reality are power struggles that overflow our own borders and involve high voltage geopolitical tensions, with the practical consequence that the routine management of a mayor or a governor, whether deficient or acceptable, has the capacity to influence a general result on which depends not only the internal balance of power, but also the position of strength of the Republic vis-à-vis the aggressor powers.

The metabolism of global capitalism, which suppresses sovereignties and denationalizes societies at an overwhelming speed, had its own expression in the Venezuelan political situation, and the material and emotional costs that the country has had to assume as a result of this are not few. Under this influence, the leading layer of anti-Chavism believed that, by establishing a relationship of vassalage with the United States and Europe, the dismantling of Chavism would not be long in coming. Within a short period of time, the territorial axis where strategies were defined shifted from Caracas to Washington, provoking the logical effect of a loss of command capacity due to territorial distance.

The powerful impact of the consequences of this decision did not become palpable until, in 2020, the “Guaidó project” began to show clear signs of exhaustion.

But in the time between the initial expectations and the definitive clash with reality, a metamorphosis had taken place: the opposition parties, with their municipal, sectoral and state cells, including the network of agitators forged in the color revolutions of 2014 and 2017, was dismantled. As a company dedicated to politics, and after being bought by a US transnational for below its market value, anti-Chavismo organized in parties suffered the severity of the same privatization policy it advocates as the most coherent model for the country.

The dismantling also had an ideological extension that accompanied the material disarmament of the political organizations of the G4 that progressed since 2015, the year in which the coalition of opposition parties conquered the National Assembly (NA), almost having enough majority to reformat the universe of public powers and the legal order of the Republic.

The strategic reversal of the program was the source of all the problems that followed, since a strategy defined by the permanent mobilization in support of Guaidó, focused on waiting for a breakdown of the FANB or a foreign intervention, would obviously be a breeding ground for demobilization, frustration and the continuous weakening of the structure of its organizations.

In retrospect, these premises were based on a coherent vision: the gamble on regime change supported by the main nuclear powers of the Western world was in contradiction with oiling the parties’ machinery for future electoral events, the preparatory phase requiring an intense deployment throughout territories, promotion of candidates and, above all, the design of a program. In this way, not only a dividing line was created between the opposition parties and their bases, but, much more seriously, their exclusion from politics in a practical sense was encouraged.

Consequently, the regional elections called for this November 21 have left the radical anti-Chavismo faction facing a crossroads whose bifurcation finds the accumulated frustration of its own public, on the one hand, and the weakening of the partisan structures of the so-called G4, on the other.

In the bend of this panorama, the moderate opposition that took a step towards overcoming the stalemate by participating in the parliamentary elections of last December 6, continues to endeavor to occupy the empty space, but still bears the initial stigma of the information warfare deployed by its rivals on Guaidó’s side.

But the political-corporate takeover undertaken by Washington, which has followed the Wallmart method of bankruptcy and acquisition of smaller businesses, also implied the suppression of values and customs deeply rooted in our political culture. One of them was the relative validity, but validity nonetheless, of the so-called State parties, in their Social Democrat and Christian Democrat variants, heirs of the bipartisanship, which beyond their collapse amidst increasing cases of corruption and induced bank failures between the 80s and 90s, still preserved the memory of the pact and coexistence based on a basic consensus of respect for the adversary and a minimum notion of national self-esteem.

It is not a matter of nostalgia for a past dominated by a lesser evil in the face of the current situation. Nor is it a question of doubting when the bipartite system renounced its program of national development and social equality, which it did have, every time the pressures of local and foreign capital determined a contrary course. Rather, it is a matter of bringing to the present those characteristics of our political culture that could have saved us from the precipice, even with their inherent flaws. Because we have incorporated everything we detest from our own past.

In short, the destruction of the parties has resulted in the isolation of an important sector of the country. Washington is betting on prolonging this fracture in the hope that, from that empty space, a black swan will emerge that will allow them to update the strategy of regime change.

Henry Ramos Allup and other survivors of the bipartisan era had the opportunity, in 2017, to redirect the course and catalyze the political dispute through the electoral route. Although his party Acción Democrática was not the majority force in the National Assembly, it had the necessary negotiating know-how, developed during decades of negotiations and all kinds of deals, to derail the Voluntad Popular project that, months later, would conclude in the cycle of regime change, punitive “sanctions” and military intervention maneuvers that persist to this day.

But Henry Ramos Allup took the opposite course and sold the legacy of Venezuelan social democracy in exchange for a few extra minutes of fame at the highest price he could obtain.

Perhaps if the last adeco had fought for the place inherited by a Rómulo Betancourt or a Raúl Leoni, we would have been spared a blocked economy, the elections would probably have developed normally and we would have managed to extend, perhaps for a few more decades, the model of socially distributing the oil income as a mechanism to mitigate our most pressing problems.

Although the geopolitical coordinates of the regional elections are of a decisive weight, their projection in the basal layer of the Venezuelan nation depends on strengthening the bases of a political regularization, where we can interweave the broken threads of our political coexistence caused by a failed project of generational renewal of the opposition that has bet on a low intensity civil war to take power.