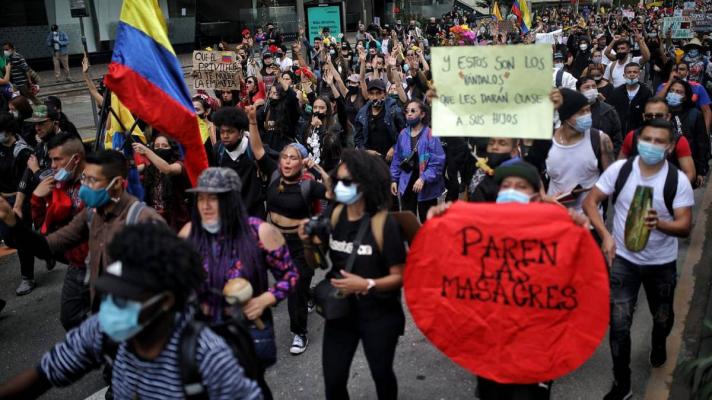 Colombian women have been protagonists of the National Strike (Photo: Esteban Vega / Semana)

The Brutal Repression against the National Strike

The figures of human rights violations in Colombia in the context of the repression of the National Strike that began on April 28th are evidence of State terrorism in Colombia. The Institute for the Defense of Peace (Indepaz) identified 55 people killed up to May 25 alone, and counts 6 more people who remain unidentified in the city of Cali.

The Attorney General’s Office itself, a body with known links to Uribism, has had to acknowledge 129 victims of forced disappearance during the National Strike alone, however human rights organizations have different figures, all in excess of 300 people, of which approximately 15% are women.

Murders, forced disappearances, torture, arbitrary detentions, illegal searches, use and protection of para-police forces, are just some of the crimes that the Colombian State has committed against the population in this month of popular protests, which still cannot be collected and centralized, as the situation continues to develop, and human rights organizations are also the targets of these violations.

While the NGO Temblores counts 22 victims of sexual violence, the Campaña Defender la Libertad, for its part, speaks of 29 victims and the feminist organization Sisma counts 109 cases of sexual and gender violence, all of them sexually violated by the security forces.

In addition, it remains to be established whether the women who are still missing have also been victims of this crime.

Whatever the exact number, what is certain is that sexual violence has been a constant of State terrorism in Colombia and during this month of brutal repression in the main cities of the country has not ceased.

Sexual violence in the social and armed conflict

The report entitled “The State and sexual violence against women in the context of socio-political violence in Colombia” states:

“In the midst of a patriarchal and macho culture such as the Colombian one, the sexual violence that occurs in the framework of the armed conflict is part of a continuum of violence that women face every day and whose invisibility, justification and daily naturalization extends to the sexual crimes they suffer on the part of legal and illegal armed actors. This cultural and social environment seriously hinders access to justice because for many victims, these acts of violence are not considered violations of their human rights. As a correlate, the logic of the administration of justice endorses this situation and contributes to its continuity by not duly investigating these crimes and punishing their perpetrators, and by considering these crimes as isolated cases in a context of systematic and generalized violence”.

This is evidence of a serious situation, which is that 59.8% of the cases of sexual violence against women registered in the context of the Colombian armed conflict are committed by state actors.

The Single Registry of Victims, as of September 30, 2020, indicates that in Colombia 32,697 people have been victims of crimes against freedom and sexual integrity in the development of the armed conflict, of which 91.8% of the victims are women.

In the midst of the genocide against social leaders in Colombia, the Ombudsman’s Office itself has called attention to the murders of women social leaders and human rights defenders, given that in many of them sexual violence is recorded prior to the murder.

In the case of the Colombian paramilitary groups, their sexual violence against women is so common that even the increase in gender violence and sexual crimes against women and children, rape, sexual slavery and forced prostitution is reported as one of the indicators of their presence in a territory.

As if all this were not enough, a report prepared by Professor Renan Vega Cantor in 2015 stated that at least 53 Colombian minors were raped years ago by U.S. soldiers and security employees stationed in Colombia, in the towns of Melgar and Girardot alone, close to the Tolemaida military base, the most important in the country, located near Bogota.

These sadistic U.S. military and private contractors not only raped the girls and adolescents, but also recorded the abuses and sold the videos as child pornographic material.

Vega Cantor describes these acts as the expression of a “sexual imperialism” that, thanks to bilateral agreements and the diplomatic immunity of U.S. officials, remains in total impunity.

So far, it is unknown what is the number of rapes committed in other facilities where these U.S. troops and military contractors circulate in Colombia, nor are there any figures on what may have happened to other girls since 2015, nor is any data known about the abuses that these same actors may have committed against adult women because the impunity granted by the Colombian State to the Americans in its territory conceals these types of crimes.