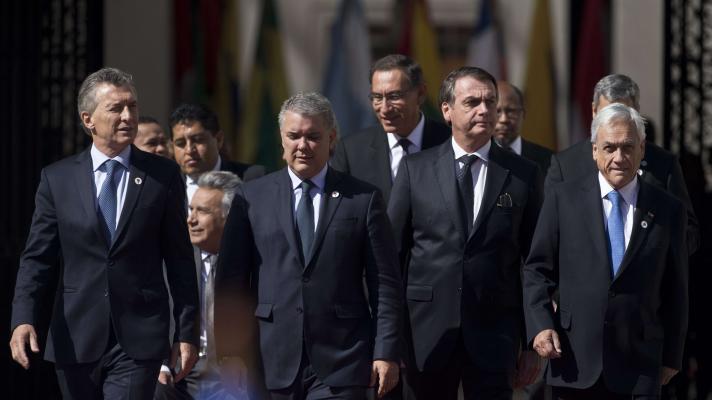 A few days ago some news portals reported that Colombian President Iván Duque was denounced before the International Criminal Court (ICC) for crimes against humanity. This denunciation was made by Senator Iván Cepeda and social organizations due to the demonstrations in the context of the National Strike that started last month and is still ongoing in Colombia.

Duque has joined the list of presidents denounced in this international tribunal that belong to the outdated Lima Group, the triad of defendants being led by Jair Bolsonaro, president of Brazil, and Sebastián Piñera, his counterpart in Chile.

These facts are cautiously reported in the global press; this would not be the case if it were Venezuela. We provide some clues about the background of each of these characters, their connections, interests and what brings them to this judicial arena.

DUQUE: VIOLENCE MADE IN USA

Iván Duque, Álvaro Uribe Vélez’s pupil and president of Colombia, has not ceased with attacks, accusations and threats against Venezuela. It was 2017 when Duque promoted the complaint, together with Chilean and Colombian congressmen, against Venezuelan President Nicolás Maduro at the International Criminal Court for “violations of international law”.

The truth is different: as a result of the tax reform bill, disguised as “Sustainable Solidarity Law”, which would significantly impact the Colombian people due to the increase of taxes on services and other items, the opposition to Duque and the trade unions called for a National Strike on April 28. Accordingly, the events unfolded as follows:

On May 10, the Colombian National Police, with agents and armed civilian infiltrators, decided to attack a group of indigenous people who were demonstrating on the outskirts of the Colombian city of Cali with gunfire. The Association of Indigenous Councils of Northern Cauca (ACIN) reported that “harassment by armed civilian individuals persists, with the complicit accompaniment of the army, the police and the Esmad (Mobile Anti-Riot Squad)”.

Likewise, the Regional Indigenous Council of Cauca (CRIC) states that the attack made by armed “civilians” on the demonstrators is a tactic of repression very typical of paramilitarism.

As of May 11, the Institute for Development and Peace Studies (Indepaz) published its register of data on these protests and their unfortunate outcomes:

A few days after the protests began, the spokesman of the United Nations, Stéphane Dujarric, communicated that the Secretary General of that multilateral body, António Guterres, is “following the situation in Colombia with great concern, including the violence we have seen, the human rights violations reported in the context of these protests”.

False positives, assassinations of peasant leaders, links with paramilitarism and drug trafficking, glyphosate spraying and consent to U.S. military presence in Colombian territory are part of the main features of Iván Duque’s resume.

The tax reform, applauded by the International Monetary Fund (IMF), was just the icing on the corporate cake that Duque has been baking for some time, as his background and connections with the US economic lobby have been in place for years.

In December 2020, Duque expressed to the American Jewish Committee (AJC) that “Colombia is Israel’s number one ally in Latin America and the Caribbean (…) We want Colombia to be able to become the Silicon Valley of Latin America”. Colombia recently signed a free trade agreement with Israel and intends to open an innovation office in Jerusalem in the near future.

Despite the fact that the statements of rejection in the international system have been restrained, the moderate position of the United States in this situation has not been surprising: the statements of the Deputy Spokesperson of the State Department, Jalina Porter, showed support for Duque’s government.

The United States maintains strong ties with Colombia. And the evidence points to it: for example, in 2007 Chiquita Brands International (former United Fruit Company) had to pay a fine of 25 million dollars for doing business with paramilitaries in Colombia, which according to the plea agreement, the US company paid more than 1.7 million dollars starting in 1997 to the United Self-Defense Forces of Colombia (AUC). However, the fine is not enough for the murders of more than 10,000 people under that corporation’s finances to the AUC. 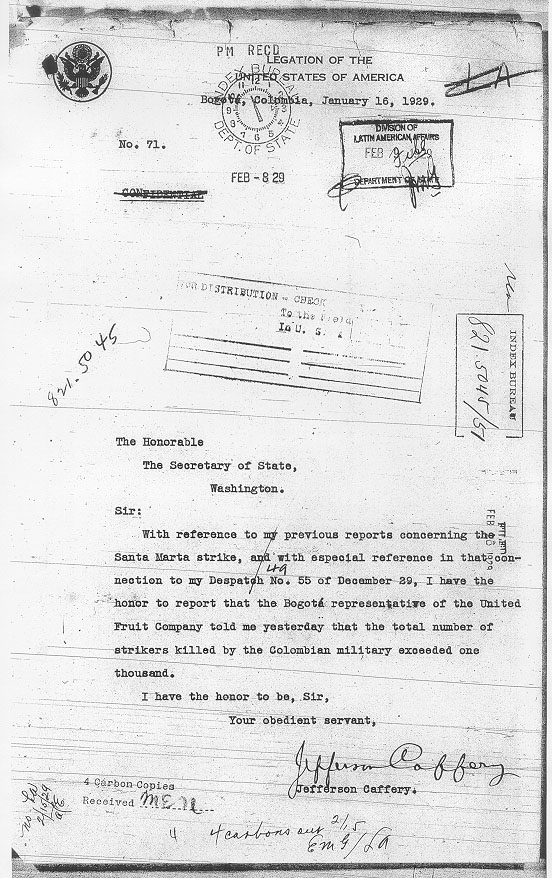 Letter to the Secretary of State in 1928 regarding the murder of thousands of  Colombian UFC workers. CREDITS: Archive

It is worth remembering that the same United Fruit Company was the executor of the 1928 banana massacre in Colombia, being the ominous outcome of a strike of workers, who when they did not withdraw from the place of protest the Colombian army opened fire, killing thousands of people.

This is brought up with the intention of reaffirming that the modus operandi has not changed, and neither has the financing of large corporations to irregular armed groups, the Colombian oligarchy continues with the U.S. endorsement to perpetrate abuses against the people of Colombia. Or rather, they continue to follow the instructions of U.S. bosses.

These ties with the United States were strengthened at the beginning of this century. Just as there was the Marshall Plan as a package of U.S. “aid” to other nations, Colombia received a more exclusive one: Plan Colombia, focusing on the military assistance provided throughout all these years to Colombia, and even more, when Álvaro Uribe Vélez entered the presidential scene.

In 2003 alone, Mario Murillo states in his book Colombia and the United States that the U.S. budget for foreign operations included more than 500 million dollars for Colombia, 70% of which was for military and police. Colombia currently has at least seven U.S. military bases.

Colombia takes delivery of one of three C-130 Hercules from the United States.
CREDITS: Presidency of Colombia

From its conception and financing was born Esmad, Colombia’s counterinsurgent security force that has been the perpetrator of countless human rights violations.

Year after year these warlike ties have been strengthened. In 2018, Colombia’s entry as a global partner of the North Atlantic Treaty Organization (NATO) escalated and was formalized, being the first South American country to join that organization.

Today, Duque has a current complaint before the ICC for crimes against humanity, in the midst of a political and social cataclysm as a consequence of his administration that is alien to the welfare of the Colombian population.

BOLSONARO: THE AMAZON, THE TRANSNATIONALS AND THE PANDEMIC

It went under the table in the media sphere that in 2019 an event was held in New York in honor of Jair Bolsonaro, president of Brazil, where he was to be awarded as person of the year. The event was organized by the Brazilian-American Chamber of Commerce and brought together large corporations, such as Delta Air Lines, The Financial Times and Bain & Co. that sponsored the gala.

In this context, other entities refused to comment to the press on whether they had withdrawn from the event, including Bank of America, Merrill Lynch, Morgan Stanley, HSBC, BNP Paribas, Credit Suisse, Citigroup Inc and JPMorgan Chase & Co.

Later, the Brazilian-American Chamber of Commerce posted on its website that it had chosen Bolsonaro as its person of the year because of his “intention to foster closer trade and diplomatic ties between Brazil and the United States.”

Bolsonaro was forced to cancel his trip to the U.S. business center because of protests by environmental groups and organizations that raised their rejection of the destruction of the Amazon led and accelerated by the Brazilian president. What mattered in that narrative, however, were Bolsonaro’s obvious connections to the U.S. economic elite.

In an investigation by The Guardian on the business of deforestation and cattle ranching in Brazil, some keys that orbit in the financial dynamics of resources in the Latin American country are pointed out:

In the face of the pandemic, Guedes emphasized that his ultra-liberal reforms were the solution, and he was joined in this by Environment Minister Ricardo Salles, who saw the pandemic as an opportunity for the accelerated abandonment of regulations protecting the Amazon.

Another company that joins the pro-Bolsonaro list, Cargill Corporation, the foreign company most active in the Amazon agribusiness, since the presidential campaign announced its support to the now president, they knew him very well from Congress. This corporation is a spearhead in soybean production in Brazil. Likewise, Cargill announced its explicit support for deforestation in an open letter to soybean producers in Brazil, and its opposition to environmental protection projects.

Even Barings Bank applauded Bolsonaro’s victory in the presidential elections, because having Sergio Moro and Paulo Guedes in the cabinet ensured fluidity in its business. Barings Bank described Brazil as the “new frontier” for the world economy.

Since Michel Temer took power in 2016, the stage was set to relax the enforcement of federal laws against deforestation, in addition to cutting the budget of the Ministry of Environment. The fire that subsequently occurred only catalyzed corporate cannibalism for the resources of that Amazonian space.

The resources of the Amazon region are highly coveted, the agricultural potential and mineral wealth is unparalleled. The levels of access to it for foreign capital under the Bolsonaro government, an ally of Wall Street, are unparalleled.

Bolsonaro currently has not one ICC lawsuit, but four: 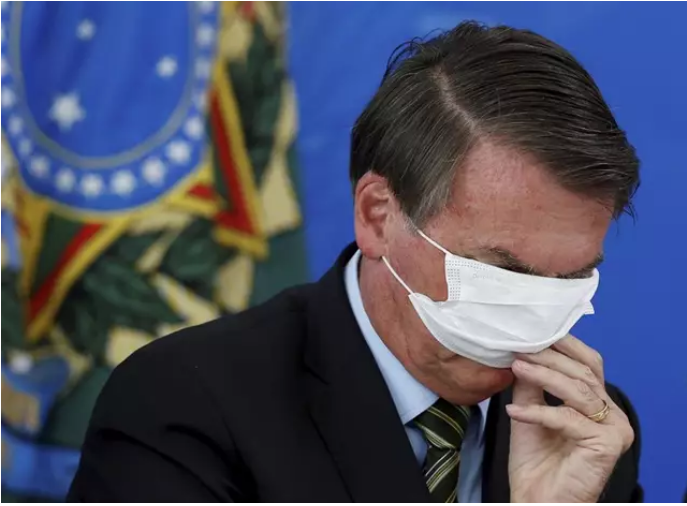 One of the complaints against Bolsonaro before the ICC is for the handling of the pandemic. CREDITS: Zuma Press

PIÑERA: AT A CROSSROADS

While the complaints before the ICC and the closeness to the United States unite these presidents, another unifying factor between Bolsonaro and Sebastián Piñera is the admiration for the dictator Augusto Pinochet.

In 2019, protests were ignited in Chile as a result of a fare increase in the public transportation system. Faced with the protests that began to develop, Sebastián Piñera, President of Chile, decreed a State of Emergency in the capital as well as a curfew. This did not stop the demonstrations, which were also repeated in other cities such as Valparaíso, but it was on October 25, 2020 when more than one million people gathered in Santiago de Chile in rejection of these new policies.

Prior to this event, the Mapuche indigenous people had denounced the Chilean government before the ICC for violence, genocide and also for the stolen Mapuche babies destined for adoption by foreign families.

As for the protests that broke out that year, the Chilean national police, known as the Carabineros, committed serious human rights violations and abusive use of force. Weeks later, the process for a new Constitution through a Constituent Congress was convened.

In April of this year, former Spanish judge Baltasar Garzón, of the Chilean Human Rights Commission (CHDH), requested that the ICC investigate, indict and initiate a trial of the Chilean president, due to the events that began in 2019.

The main argument, as written in the document delivered to the ICC, is that there are “350 thousand cases of human rights violations that should be investigated by the Public Prosecutor’s Office”. In the file submitted, more than 400 people were wounded in the eyes by the Carabineros.

Days ago, in the elections of the Constituent Convention, the progressive forces achieved a significant advance, contrary to the case of Piñera’s party, which only obtained 38 seats.

However, if any president violates human rights and the media repercussion is almost nil and the US administration’s indignation remains unmoved, it is certain that he is an ally of the United States. Piñera is no exception: analysts from JPMorgan and Goldman Sachs estimated that this politician would achieve an acceleration in the Chilean economy that has not been possible. 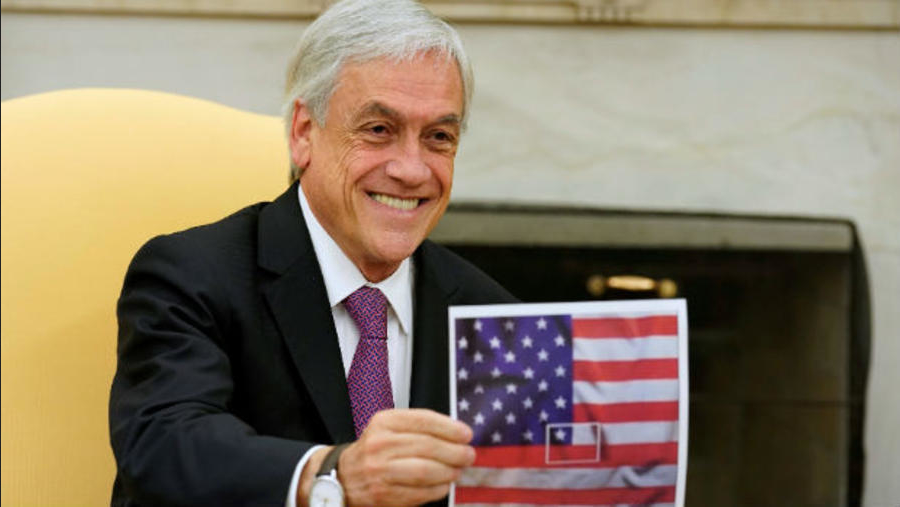 The support of Western financial power for these governments in this resource delicacy called Latin America is evident. Large corporations continue to occupy a space on the geopolitical chessboard, and even more so when it comes to strategic sectors. As long as this interest remains present, it does not matter if they manage the pandemic poorly, or if they assassinate the civilian population claiming their rights, the important thing in this context is that each puppet moves to the sound of the puppeteer.

Soon, these three countries will have elections that may change the current political scenario, without ruling out the appropriation of resources and the political apparatus that allows U.S. plundering and connivance as the core of the confrontation.