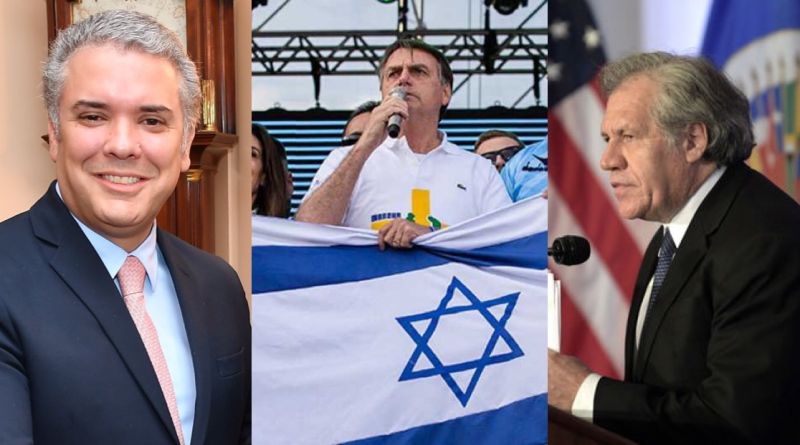 The latest Israeli bombing campaign on Gaza and ruthless killings of Palestinians has Latin America split along ideological lines once again.

OAS chief Luis Almagro expressed his vigorous support for the Israeli regime on May 11, a position typical of the region’s United States-allied right-wing.

“We stand in solidarity with Israel, this region’s historical and strategic partner, and with its civilian population, which has been the victim of attacks by more than 600 missiles launched from Gaza,” tweeted Almagro.

Israel’s outspoken supporters in the region include Colombia’s Ivan Duque, who has been engaged in the deadly repression of mass citizen protests since April 28; The Zionist entity can also count on support from far-right President of Brazil Jair Bolsonaro and ex-functionaries of Bolivia’s former coup regime which sought Israeli support to repress indigenous people during mobilizations last year. Pro-coup factions of the Venezuelan opposition linked to Juan Guaido have also maintained close cooperation with Israel during the course of the recent destabilization and coup attempts in Venezuela, but also for many years prior.

Colombia and Israel have an especially pronounced relationship, as two countries in receipt of large sums of U.S. military support. The IDF began training Colombian troops, responsible for serious human rights violations, in the early 2000s. Export of military equipment from Israel to Colombia doubled between 2002 and 2006. 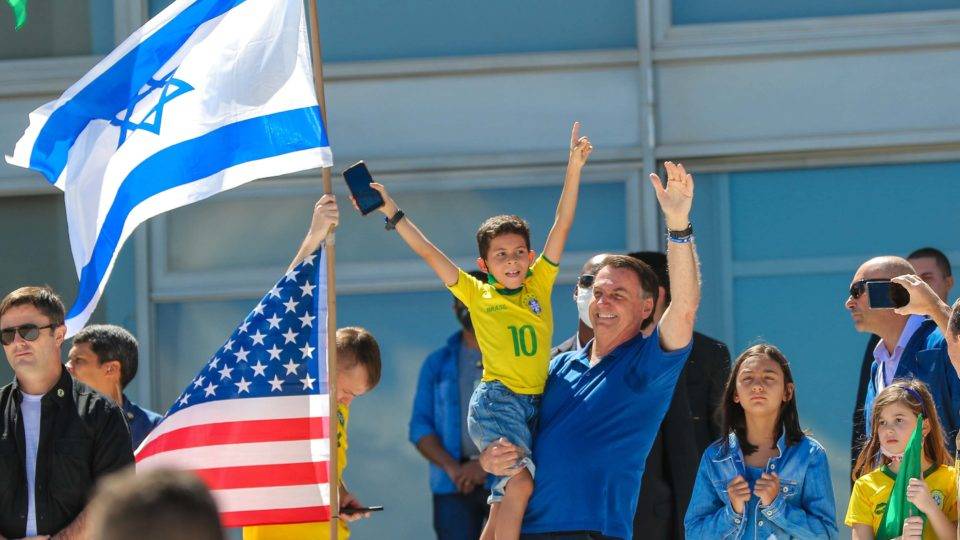 Jair Bolsonaro at a rally in Brasilia. May 3, 2020. Photo: Wagner Pires/Futura Press

Brazil’s Bolsonaro is another leading proponent of Israel-Latin America ties. Often spotted at rallies with an Israeli flag, Bolsonaro has long praised Israel as a way to energize his radical Evangelical supporter base whose religious fervor has generated the belief that the second coming of Christ is only possible if Jerusalem is under Jewish control. The far-right leader, a Catholic, went as far as to be baptized in Israel’s Jordan river in 2016, broadcasting the affair via Facebook in order to win the confidence of Evangelical voters.

For a short-lived period, Israel gained another ally in power while Bolivia lived under the unelected regime led by Jeanine Añez. Following the coup against Evo Morales in November 2019, Anez’s feared Interior Minister, Arturo Murillo sought Israeli assistance to repress the anti-coup protests of primarily indigenous people who demanded the restoration of democracy.

One month after the execution of anti-coup protesters in the massacres of Sacaba and Senkata, Murillo said, “We have invited them (Israel) to help us. They are used to dealing with terrorists, they know how to treat them well. And the only thing we want is to give peace to citizens.”

Juan Guaido and his allies representing the extremist faction of the Venezuelan opposition have for years maintained a strong relationship with Israel. Julio Borges, based in Washington and Bogotá, and María Corina Machado based in Miami, top the list of Venezuelan far-right figures who’ve made deals in exchange for support from the genocidal, Zionist entity.

Israel’s collaboration with Latin American tyrants goes back decades, exemplified in the arming of military dictatorships in Guatemala and El Salvador in the 1970s and notably in the arming of the Somoza dictatorship in Nicaragua. In the year before the victory of the Sandinista revolution, 98% of Somoza’s weapons were being supplied by Israel. Fast forward to today, the right-wing governments of Honduras and Guatemala have tightened relations with the occupying force.

Leftist governments of Latin America have taken a diametrically opposed position. Cuba’s Foreign Minister Bruno Rodriguez one of the latest to express solidarity with the Palestinian people:

“Cuba strongly condemns Israel’s indiscriminate bombings against the Palestinian population in Gaza and denounces the permanent support of the United States for these crimes.”

Venezuela and Bolivia also have long-standing policies in support of Palestine, including the recognition of Palestinian statehood. Evo Morales declared Israel to be a ‘terrorist state’ in 2014 and imposed visa restrictions on Israeli citizens, a measure which was lifted by the coup regime in 2019.

With the return of democracy in Bolivia, the country has restored its official position as an ally of Palestine, with Vice President David Choquehuanca recently stating, “We want to express from Los Andes all our solidarity, our respect and identification with the cause of the Palestinian people in their struggle to recover their territory, peace and freedom. Jallalla Palestina!” Evo Morales added his voice, condemning “the massacre that Israel perpetrates with the imperialist support of the U.S. against the Palestinian people..”

The Venezuelan government issued a statement on May 10th, condemning “the new violent actions against the Palestinian people by Israel” and alongside Cuba, has taken the most vocal position in support of Palestine in all of the Americas.

The late leader of the Bolivarian Revolution, Hugo Chavez, was an ardent supporter of the Palestinian cause, when responding to the 2009 attack on the Gaza freedom flotilla, President Chavez proclaimed,

The same position is widely shared among Chavistas still today. On Wednesday, leader of the governing United Socialist Party of Venezuela (PSUV) Diosdado Cabello took to the airwaves for his weekly program Con el Mazo Dando to express his sentiments of support for Palestinian liberation.

“A people that resists the attacks on terrorism by the genocidal government of Israel, from here our affection, our respect, our admiration for the eternal struggle of the Palestinian people and we are sure that one day Palestine will be recognized as a free country with all its territory.”

The National Assembly of Venezuela approved an agreement in solidarity with the Palestinian people during its session on Thursday, an item which was presented by Chavista lawmaker, Nosliw Rodríguez. 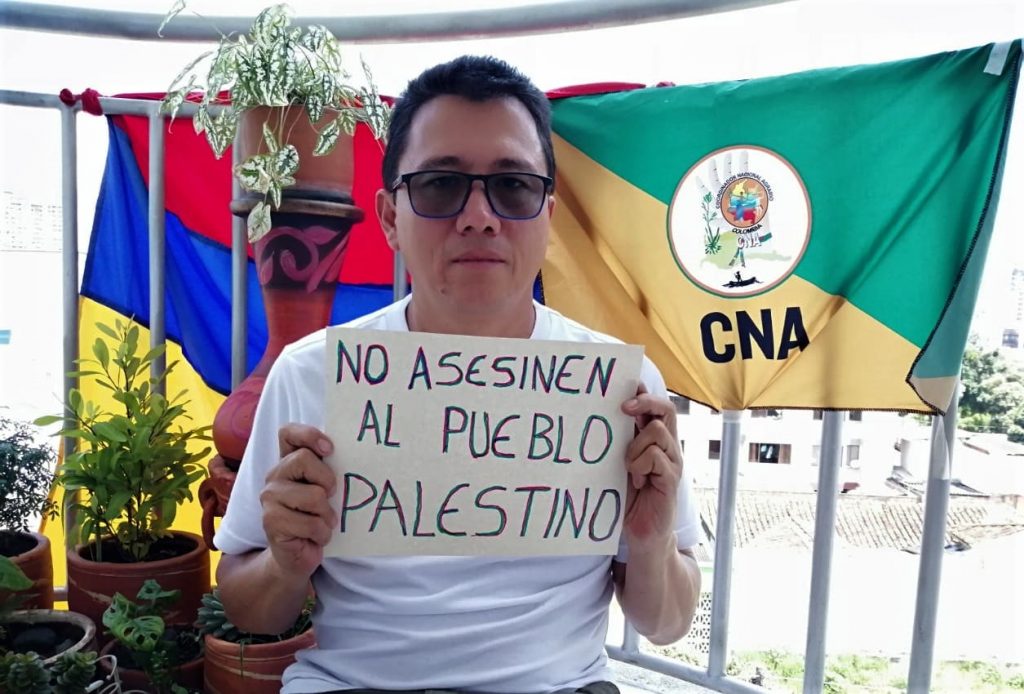 German Bedoya, of the National Agrarian Coordinator of Colombia, joins the Colombian voices of solidarity with Palestine. May 13, 2021.

ALBA-TCP issued a statement condemning Israeli aggression against the Palestinian people, calling on respect for international law and the enforcement of UN resolutions. Executive Secretary of the of the Alliance, Sacha Llorenti has spoken out on various occasions, this week condemning “Israel’s criminal military aggression against the Palestinian people.”

Finally, as Colombians continue to mobilize against Duque’s unpopular neoliberal regime, numerous social movements, unions and the political left have expressed solidarity with the struggle of the Palestinian people against the brutality and terror of Israel. The Comunes party tweeted “Our hearts also go out to Gaza and to all the Palestinian people who have suffered the military occupation and usurpation of their lands for more than 70 years by the genocidal and criminal project “Israel.” Palestine is an example of dignity, Palestine will be Free!”

Colombia also has its own BDS chapter and campesinos of the Coordinador Nacional Agrario (CNA) have been among the countless voices calling for an end to the killing of Palestinians.