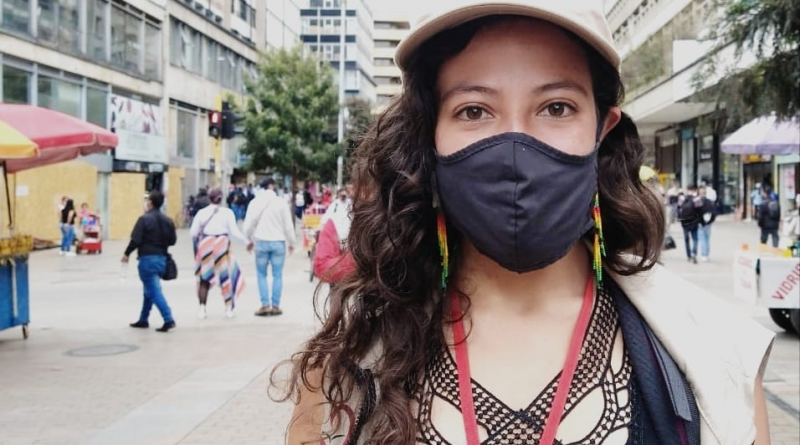 Understanding the context of the mass protests requires us to look at the character of the Colombian narco-state. Colombia is the United States’ closest ally in the region. In addition to military bases, the heavy presence of U.S. military personnel and the DEA; the State Department has funneled billions in military aid under the pretext of assisting Colombia’s anti-drug strategy but the result has been a continuous spike in illicit drug production. Tatiana Moreno walks us through the impact of the violence this generates and how it’s fed into popular anger on the streets.

It appears that the forms of repression are evolving, there are now armed groups dressed as civilians firing at protesters.

Our protests began on April 28th, we’ve been on the streets everyday and there has been tough repression from the very beginning which is now turning into something else. In particular in the city of Cali, in the west of Colombia, there has been a war-like approach from the government matched by a strong resistance of the people. The majority of deaths since the start of the protests have been in this city. There has been a total violation of human rights and international law, there have been helicopters used for repression that are using schools and landing zones. In the nearby town of Gachancipa, tanks were brought out and the population was told that if they stepped outside their house they’d be ‘taken care of’. In Cali there are cases of armed civilians jumping out of lorries to attack protesters, when people managed to get close to one such lorry they found equipment of the ESMAD (riot police) and other police materials. The police had to formally recognize that this was their lorry. There’s a clear use of paramilitarism to squash the protests in Colombia.

Here in Bolivia the coup also mobilized paramilitary forces to repress the population. How has the Colombian government used this strategy?

Paramilitarism in Colombia goes back a long way and begins really with the ex-president Alvaro Uribe, when he was Governor of Antioquia. Uribe then became President and has remained as the person who directs the government of Ivan Duque. As Governor he encouraged various groups to arm themselves to defend their land. These groups then become paramilitary groups who have come to control a large section of Colombia’s national territory. In rural areas and other zones abandoned by the state, it’s these groups that control everything and who carry out these massacres. There is very little information about what goes on because the state and the paramilitary groups shut out any media who try to report there. So, what we see is that the state is now applying to the cities what they’ve traditionally done to the countryside.

Is Colombia a narco-state?

Colombia is a narco-state. One of the points in the peace accords was a commitment to reducing the illegal production of coca, but the Colombian state has tried to do that without providing any alternative means of survival for poor farmers who currently grow the crop. Some rural communities did opt to produce other agricultural goods and ditch coca, however, they then faced another problem which is that they couldn’t take their goods to market because the Colombian state has never invested in roads and infrastructure for the countryside, so many then return to coca.

The response of the state has been to eradicate coca crops by force through aerial spraying with toxic chemicals such as glyphosate which is incredibly damaging for human health, particularly so in a country without health services for rural communities. The result is that illegal coca production only ever rises because people have no other options.

There are lots of ways in which the state and the narco are linked. Many right-wing politicians have grown rich by taking lands where paramilitaries chase out campesino farmers out of their lands, leaving those people as displaced migrants and the land in the hands of powerful interests. That happened with the governor of Antioquia, Aníbal Gaviria who built his family fortune in this way.

The current President Ivan Duque has a long-standing relationship with Ñeñe Hernandez, a leading drug trafficker, everyone in government has been exposed as having these sorts of links

Colombia is a narco-state because the narcos are able to mobilize powerful forces such as the paramilitaries, the work to maintain this state of affairs that I’ve described.

Those in rural areas know how devastating and damaging this kind of aerial spraying is and this has fed into existing anger from those sectors who are now joining the protests. Of course, in the cities this is less of a factor since people don’t see first hand the realities of these toxic chemicals, but in the countryside people are committed to putting an end to this and they’re a key part of the mobilizations and road blocks surrounding the city.

When these kinds of ties come to light it’s always the same excuse about how they had no idea who these people were and the media is happy to leave it at that.

What have been some of the debates within the movement in regards to what the demands should be and what the future holds?

The regressive tax reform triggered this outpouring, but of course this is about much deeper issues that we face in this fundamentally violent country. The systematic killings of union and community leaders, of which there are on average one everyday. There are massacres every week, always at least one, but often 2 or 3. In response the state denies everything, they invent euphemisms, for example they never refer to massacres but to ‘collective homicides’. Inequality has been increasing as the rate of poverty has now hit 51.6%. There’s been virtually no income support for the large section of the country who have to go out each day to work so that their families can eat that day. This country signed two peace deals, but not only have they not been fulfilled, but there’s been systematic killings of those who signed the deals.

With all this context, came the tax reform which detonated everything, but we can see that it’s not the only demand. The government has withdrawn the tax reform but has maintained three other similarly regressive reforms in health, policing, and labor. There have been demands for the resignation of key officials, such as the Economy Minister, but those people will just be placed in different state roles.

This is a complex situation because there is not one organization nor one group of people who represent everyone in the broad movement. However, common themes are emerging to demand the resignation of those responsible for the repression, including the resignation of the President, Ivan Duque.

It’s extraordinary that Colombians keep protesting in such large numbers despite the repression and killings at the hands of the state. Do people there expect an even more extreme and violent response from the state?

The fact that people keep coming out despite the killings is hugely important. This experience has shown us the worst side of the state, but also the best side of ordinary people. Everyone’s joining in, even those not in the marches will come out to their balconies to express their support, people are giving out food and water to those protesting. Others are forming medical brigades to help the injured, mental health professionals are taking part to help those who’ve been traumatized by the repression. Lawyers are giving free advice and representation to those being charged. This unity across the whole country is what gives people confidence to keep coming out because they can see progress being made.

The state repression is likely to keep getting worse so that’s why we ask the international community, especially human rights organizations, to denounce what’s happening and pressure the Colombian state.

To finish, what would your message be for those in Bolivia who support the Colombian people in this struggle. When we see images of the repression it reminds us of what we faced last year under the coup, and the heroic protests remind us of the democratic resistance there was here.

We’ve learned a lot from Bolivia’s struggle, your struggle was powerful and dignified and we want to achieve many of the things you have there thanks to social struggle. We know that all struggles in the region are one and we can win with the solidarity and support from across Latin America.