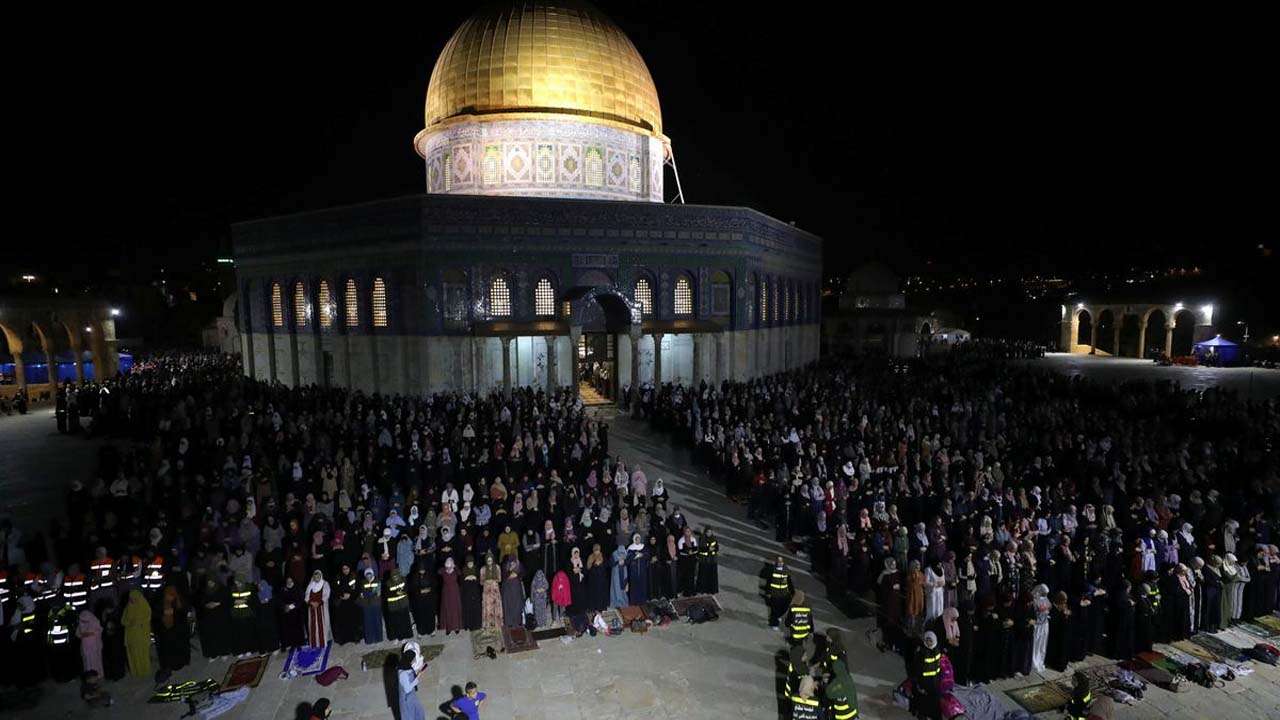 Ambassador, these are difficult times again for the Palestinian people, we would like a first-hand analysis of what is happening there and the causes behind this new escalation.

I would first like to recall that this May 15 we commemorate the 73rd anniversary of the Nakba, the catastrophe experienced by the Palestinian people since 1948 with the creation of the State of Israel at the expense of the Palestinian people. Nakba that meant the occupation and expulsion of the Palestinian people from their homes. Then, a constant of this State of Israel has been the ethnic cleansing and expansion, which is translated in 1967 with the so-called Six-Day War and the occupation of the Gaza Strip and the West Bank, including East Jerusalem, which are Palestinian territories. In addition, this expansionist state occupied territories of other Arab countries, the Sinai Peninsula of Egypt, the Arava Valley of Jordan, the Shebaa Farms of Lebanon and the Golan Heights of Syria. This has continued in an accelerated manner, now the Judaization of East Jerusalem occupied in 1967 is being attempted. Among other things, there was a decision to remove, to evict with false arguments, a number of Palestinian homes in a neighborhood called Sheikh Jarrah. False ownership documents were presented for these homes, according to which these properties belong to Jews. The Palestinian families have resisted their eviction. Added to this, it was recently Holy Week of the Eastern Churches in Palestine, and Palestinian Christians were prevented from reaching the Holy Sepulcher. Now, this week, on the last day of the month of Ramadan, the Muslim holy month, knowing that the last days have a special value and certain rituals are performed, Israel once again prevented the faithful from reaching their holy sites in Jerusalem. Those who managed to reach the Al-Aqsa Mosque were attacked and repressed by settlers and Israeli army and security forces. In this way, they once again desecrated one of the holiest sites of Islam. Repression is the order of the day, the murder of people, persecution, imprisonment, history repeats itself. Finally, there is what is happening on the Gaza border, the bombings and the death of dozens of people. And once again, we are back to talking about numbers, about fatalities. The problem is that this is something that is repeated periodically and it is regrettable that we have to face such a situation at this point in history.

One thing we are noticing these days, apart from what is happening in the occupied territories, is that Israel is escalating tensions in the entire region, in fact, military exercises had been announced on the border with Lebanon, exceptional exercises of great military power,suspended at the last minute to concentrate the fire on Gaza. How do you view this behaviour?

It is a tactic since ancient times, every time there is an internal crisis, they try to export and divert attention to an external danger. Israel is going through a very deep crisis that has resulted in four elections in the last two years. The last elections were held in March, the task of forming the government was entrusted to the current Prime Minister, who was unable to achieve it. An Israeli opposition leader is entrusted with this task, and at the same time, the Israeli prime minister is facing trials in the so-called Israeli justice system for corruption. Then, this gentleman, in order to avoid jail and trial, intends to perpetuate himself in power in order to maintain his immunity and avoid being imprisoned. This is one of the reasons for the tension created and the scale that the State of Israel has developed these days. Unfortunately, the cost is human lives.

And meanwhile, the international community continues to look the other way.

The world sees something different from reality, a product of the story that the hegemonic media spreads. It is curious that in those media that talk about the rockets in Gaza, they omit the occupation of Palestine, they omit the deprivation of freedom of the Palestinian people. They talk about Israeli democracy, and do not say that the Palestinians do not have freedom of worship as a result of the Israeli occupation. Because Palestinians cannot reach the Holy Sepulcher, Palestinians cannot reach the Al-Aqsa Mosque. Unfortunately, they have the power and their allies encourage them and don’t have to pay any price, the one who pays is the people under occupation.

The world sees something completely different from reality, a product of the narrative disseminated by the hegemonic media. It is curious that these media, which talk about the Gaza rockets, omit the occupation of Palestine, they omit the deprivation of freedom of the Palestinian people. They talk about Israeli democracy, and do not mention that the Palestinians do not have freedom of worship as a result of the Israeli occupation. Because Palestinians cannot reach the Holy Sepulcher, the Al-Aqsa Mosque. Unfortunately, they have the power and their allies encourage them and they do not have to pay any cost, the one who pays is the people under occupation.

An ever recurring theme is how this is received by the Palestinian population in terms of the need for unity of all resistance forces. A forthcoming meeting was announced but has been suspended, but how do you see, within this framework, the response of the organizations that comprise this resistance? Is there a perspective of responding in a unified way to this aggression?

Regarding the elections: they were postponed because of the impossibility of holding elections in all the occupied Palestinian territories. According to the Oslo agreement signed between the Palestine Liberation Organization and Israel in 1993, these elections are held in all occupied Palestinian territories, including East Jerusalem. On this occasion Israel refused to allow them to be held there. For us, the Palestinian territories are one unit and the Palestinian people are one, the elections must be held in all the territories and for all the people. If it is not possible to hold them somewhere, or for some sectors of the Palestinian people, then they are postponed until it is possible to hold them in the whole territory and for all the people. This is the reason for the postponement of the elections. Now, as far as unity is concerned, I think that the elections were going to contribute a lot to the unity of the Palestinian people, but I would like to emphasize the unity of the Palestinian people in the street. If you saw, in the last few weeks the demonstrations in Jerusalem and other places, you didn’t see party flags, the only flag you saw was the Palestinian flag. This is a message, an important signal. Another element to highlight is the participation of the youth in these demonstrations. The youth born under occupation who did not know anything other than occupation, are the youth who are resisting. I think that, although we have, like all of us, our internal problems, we are closer to unity and this is what is happening today, because a bullet, a rocket, an Israeli projectile, does not ask you what your creed or your party is. It just kills Palestinians.

Ambassador, we were discussing the occupation of the territory, the expulsion of men, women, children and the elderly from their homes, but there is another important aspect of the occupation, because it does not allow health-care, it is known that they are not vaccinating the Palestinian population, it also affects education, because they do not allow the study of Palestinian history, culture and religion. They want to Judaize and also deny the Palestinian identity.

The last thing you mentioned is the Israeli dream, to deny the national identity of the Palestinian people. Everything they do moves in this direction. A people without identity are not a people. One of the elements that the Palestinian people have preserved best is their national and cultural identity. Their struggle is based on that aspect. The truth is that, according to international law and the Geneva Conventions, an occupying power has a responsibility and an obligation to provide for the needs of the people under its occupation, and this also means health care. Everywhere it is reported that Israel is ahead of the world, in the vanguard, with the vaccination campaign, that they have managed to vaccinate a high percentage of the population. Indeed, but this is also another sign of the racism of the State of Israel, which does not fulfill its responsibility towards the people it occupies, the Palestinian people. Israel has announced its intention to give vaccines to several countries, which are staunch supporters of Israeli policy. However, it has not done so to the Palestinian people under its occupation, whose responsibility, according to the international agreement and the Geneva treaties, obliges it to provide vaccines. This is because it is a colonialist occupation, Israel is a colonial power in Palestine, what matters to it is to perpetuate its occupation, and if it is without the people, so much the better. It does everything possible so that Palestine is left without Palestinians. For this, it implements all the means and resources at its disposal. There are many of them.

I can not help but ask about what the Argentine media have reported: the arrival of Israeli doctors in our country. Not because they are coming to help and bring vaccines, but because of the seriousness of an event that the hegemonic media hide, which is the attempt to use Argentines as volunteers, as guinea pigs, for the testing of these vaccines. Do you have any opinion on this?

I am not going to give my opinion on the policy of an independent and sovereign country such as Argentina, this should be done by the Argentines and the Argentine political forces, the Argentine society. I would like to point out that Israel, using health, technology, trade, all at the service of the Israeli occupation policy, is one of the means it uses to promote its policies.

Thank you ambassador for this communication, our solidarity with the Palestinian people and let us hope that the next communication will come to surprise us in better times for your beautiful people.

We must not lose hope and especially on a day like today which is the last day of the month of Ramadan, so I want to send greetings to the Muslim community and wish them happy Aíd al Fitr and may peace reign again in the land of peace with justice and freedom.