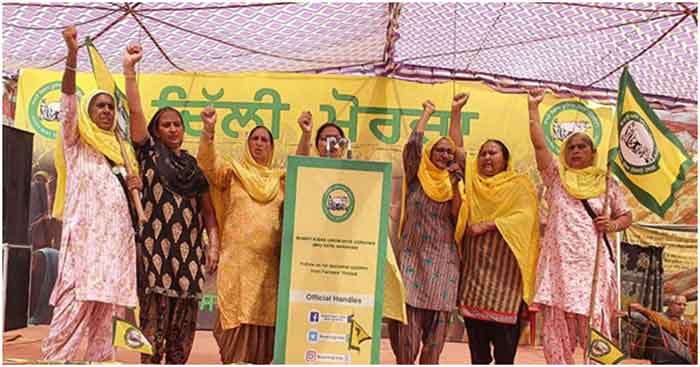 The tempo  of farmers movement continues at Tikri border  at similar pitch as before  with intensity of Coal in a blast furnace. A series of programmes have been launched by the Bharatiya Kisan Union)Ugrahan) commemorating the Ghadri  Mela through confronting the neo-fascist tyranny of the agricultural bills imposed by the BJP party. The rebellious spirit of farmers is intensifying in all sections. Tooth and nail the leads and cadres of the movement are reprimanding the Pro-Khalistani forces who are sabotaging the secular movement. Even if only around 5000 person s  attended all the recent conferences had immense qualitative significance in shimmering the torch of resistance and not letting the spark of rebellion extinguish. Whatever the setbacks or obstacles the morale is still sky high. I am most impressed with the magnitude of  energy deployed the youth to crystallise revolutionary spirit as well as women. The venue of the conferences was named Gadri Gulab Kaur Nagar.The meetings comprised of farmers, labourers and govt.employees. What is heartening that democratic forces continue to be re -imbursed from Punjab to Delhi and even other states like Ocean water flowing, with preparations made for a contingent making its way, at the time of writing.

On May 2nd  a martyrdom conference was staged at Tikri border commemorating the 400th birth day of Guru Tegh Bahadur.The speakers highlighted his secular,pro-people contribution challenging the tyranny of Moghul rule and supporting the peasant movements. He was not portrayed as a Sikh leader but a genuine crusader against oppression. His work was contrasted to that a of communal religious leaders.BKU(Ugrahan) president Joginder Singh Ugrahan highlighted the secular and pro-people credentials of Guru Tegh Bahadur.He made a striking contrast of Guru Tegh bahadur with communal leaders of today and narrated incidents like Babri Masjid and Godhra riots. He summed up how Sikh Gurus never obstructed the practice of any religion and launched a crusade against injustice or loot which the present leaders perpetrate. BKU(Ugrahan) state secretary Shingara Singh Mann narrated the relevance of the teachings of Guru Tegh Bahadur  as not being anti Sikh by killing Masanda or anti Hindu by defending Sikhs. He touched upon how today rulers played the communal card to divide the people and Guru Tegh Bahadur should be symbolised to wage a crusade against them. Such a conference revealed the importance of imbibing lessons from secular figures in religious history and using them to sharpen revolutionary and secular political consciousness. One of the most significant conferences portraying an ancient Sikh Guru in light of the present times.

On May 3rd a huge farmers contingent attending a meeting addressing standpoint on elections. The conference was chaired by Harinder Bindu, leader of the women’s wing of the BKU.The speakers highlighted that only by consolidating class struggle or genuine people’s movements can nay real victory ne won. They touched upon the link of the famers struggle with the upcoming elections; explain the futility of the parliamentary system. Issue of unemployment was addressed and how it was a direct result of the anti-people policies of the govt.They recounted how in several instances it led to suicides. Leaders condemned how people sat in power without even contesting the elections. Examples were given of Manmohan Singh earlier ,Arun Jaitley and now Uttar Pradesh chief minister Sadhu.,who were in power inspite of not contesting  elections. It was simply heartening to see the photos of the congregation, particularly the women assembled.

Balwinder Singh Ghanor Jatt stated “. People’s attention is being diverted from the struggle and they are hoping for good by voting.”

Fifteen-year-old Harmanpreet Singh Tallewal District Barnala spoke from the stage in a enthusiastic voice that now the fight is not for the lands alone but to save the conscience which shocked the audience.. Manpreet Singh Singh Singhwala, Rajinder Singh Morh Khurd also addressed from the stage and Meghraj Ralla’s team performed choreography “I am a hard working man” and the play’.

On May 4th the pandal hall literally brimmed with the spark of struggle and resistance. Issues were raised engulfing many spheres. The imposition of President’s rule  and scrapping of 370 and 35A laws in Kashmir, the declaration of black laws and the handing over of farmers lands to corporates  was condemned in no uncertain terms. The central theme was on the farmers putting up peasant flags and uproot the flags of political parties.

Ved Prakash from Haryana said that farmers had no caste or religion, and their only religion was farming. “To believe or not in religion is a personal matter. Therefore, our national flag has been made secular. So let’s rise above religion, caste and take the path of struggle.” “Everything is being handed over to private companies.”

Kuldeep Singh District President Amritsar summed up the “manner  privatization, liberalization, and was  opened through the 73th amendment of the constitution, with BJP’s central government is strongly implementing these policies. Everything is virtually sold to the private enterprises.”

Youth spokesperson Manpreet Singh Singhewala said that under the guise of corona, schools, colleges and universities have been closed down and education completely destroyed.. He called on  the youth to participate in the struggle on a large scale.

Ram Singh Chugha Kalan explained how the Adani group’s solar plant was set up in a thousand acre plot  near their  villages by forcibly taking land from the farmers and now it has become difficult for the children of those families to get married. Bahadur Singh Bhutal, Harbans Singh Kotli and Sarabjit Singh Bharthala also addressed the stage.

The BKU (Ugrahan) leadership was happy that the neo-fascist BJP party was convincingly defeated in West Bengal,.Kerala and Tamil Nadu but stressed that it was not a moral victory for democracy and in essence change only in form. With great conviction they asserted that Mamata Bnaerjee and TMC are an integral part of a ruling class or autocratic state and their role is superficial in confronting neo-fascism it’s roots. Their analysis is in contravention to that of The Samyukta United Front which calls the defeat of the BJP as a political victory.

In the view of Pavael Kussa of Surkh Leeh “BJP’s failure in West Bengal elections is not the victory of the struggling farmers, nor is it the victory of the working people of Bengal, it is the victory of Mamta Banerjee. One of the rulers of Bengal is the victory of the faction. Unless BJP will not accept its defeat because it has stepped into its hindutvi freaku politics in Bengal, has spread it well, will increase the seats to the future. It’s not right to call these results a defeat of fascism. Not being able to form a government in Bengal is not an injury to obstruct BJP’s execution. Those who know the attitude of Mamta Banerjee’s government towards people’s struggles in West Bengal will be hesitant to give such a fatwa. Mamta Banerjee’s commitment to so-called economic reforms is fundamentally no different from Modi. That’s why the path of rights struggle is still as difficult for the people of Bengal. Otherwise through these elections, BJP has made the word of communalism in the ruling class political structure of the state which will be useful even in the future.

This failure of BJP in the context of farmer’s struggle is a satisfying thing of mind time. This result is worth calming the minds of farmers in the battlefield and the people being crushed by the Modi government in the country because the enemy who is in front of them gives defeat in some area. But it’s practically not an event development worth being a beneficial aspect to the struggle.

The way the Modi government has strengthened control over the state machinery of the country and the way it is going on, the failure of forming a government in a new state is a minor in its hanging chariot A disruptive injury doesn’t even form. So it’s not a problem to stay in peace for half a day but it’s better to become a reality head soon. These opportunistic opposition parties are not capable of covering the hanging attack of the Modi government. This attack will ultimately be under the force of people’s fighting capabilities. Farmer’s struggle is also to reach victory with the strength of the farmers and with the strong support of the people. Let’s move towards real satisfaction from the victory of people’s own organised strength and struggle.”

Harsh Thakor is a freelance journalist. Toured India, particularly Punjab .Written on Mass movements ,,Massline,Maoism on blogs like Democracy and Class Struggle and frontierweekly .An avid cricket lover too who has posted writings on blogs like Pakpassion Indian Cricket Fans and Sulekha.com. Email- thakor.harsh5@gmail.com