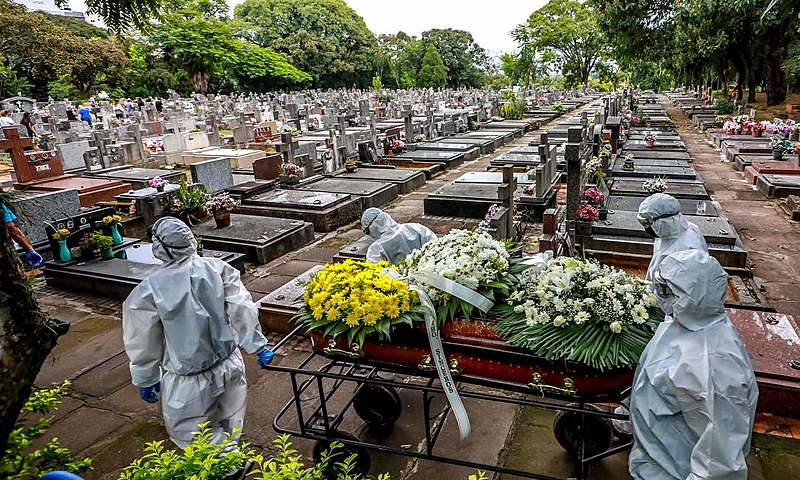 Last 100,000 deaths were recorded in a 36-day interval; Fiocruz points out that numbers may be higher

Brazil has surpassed the mark of 400,000 deaths by covid-19. More precisely, 401,186 lost their lives, according to official records since March 12 last year, when the country encountered the first death from the new coronavirus pandemic.

In the last 24 hours alone, 69,389 new cases of covid-19 were identified, and 3,001 deaths, according to the National Council of Health Secretaries (Conass).

It took Brazil five months from its first death to reach the 100,000-death mark. Another five months were needed to reach the 200 thousand mark, but from then on, the fatal cases began to accelerate at a more intense pace.

Only two and a half months later, the number reached 300,000, and 36 days after that alarming figure was reached, the country has more than 400,000 cases.

These numbers, however, are not a faithful portrait of the tragic reality, since there is a significant underreporting of cases throughout the country. Among the reasons for the inaccuracy of the records are the low number of tests and the poor management of the pandemic nationwide.

During the entire crisis period, instead of a national coordination to fight the virus, the government of president Jair Bolsonaro acted to prevent protective measures for the population.

During the entire pandemic, 14,590,678 people have been infected, not counting those who have not been tested or who are asymptomatic for the disease.

The contagion figure is higher than the current moving average, calculated over seven days, which is 60,386; this reveals that the outbreak is still out of control. The moving average of deaths is 2,526. Today ends a period of decline in this indicator that has been in effect since April 17.

RBA uses information provided by the state secretariats, through the National Council of Health Secretaries (Conass).

Eventually, the information may diverge from that reported by the commercial press consortium. This is related to the time at which the data are provided by the states to the media. Divergences, up or down, are always adjusted after the data are updated.

According to data from the Oswaldo Cruz Foundation (Fiocruz), the number of deaths may have exceeded 500 thousand. Biologist and science communicator Atila Iamarino remarked that the country has had, since the beginning of the pandemic, more than 500 thousand deaths from Severe Acute Respiratory Syndrome (SARS), which may be undiagnosed Covid.

“We only know this number thanks to testing, health departments, research centers, and the press. May they continue working to record our monitoring of this situation,” he said.

Fiocruz data points to 514,859 deaths in Brazil from SARS since the start of the Covid-19 pandemic. Given this scenario, as well as Fiocruz, Atila regrets the suspension of social isolation measures adopted by states and municipalities between March and mid-April. According to the researcher, we are “on the verge of seeing the number get worse again with reopening and holidays ahead”.

The scientist’s recommendation is to redouble care. If Brazil remains at a stable level with average deaths reaching peaks of 3,000 per day, the country could exceed 600 official deaths by mid-year if nothing is done.

“With more deaths in the first months of 2021 than in the whole of last year, we can now say that this year is worse than last year. At some point we must accept that if we do not act, if we will not fight Covid, the situation will not improve.”