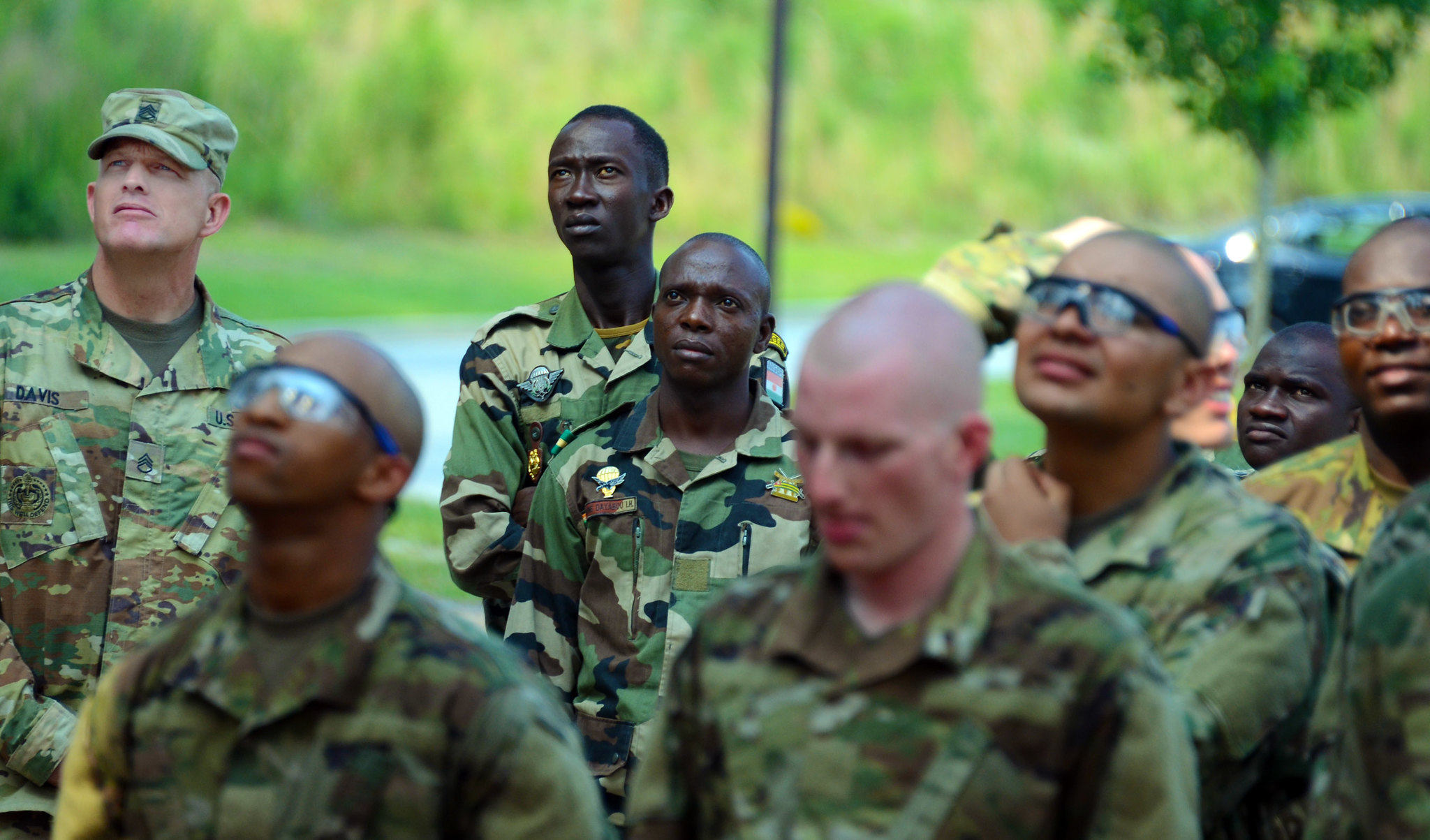 Two soldiers from the Forces de Armees de Niger at a US military training facility. Image credit Mr. Robert Timmons for US Army Africa via Flickr CC BY 2.0.

One striking feature of US military involvement in West Africa is the absence of an observable strategic vision for a desired end state. Nominally, US presence in the region’s multilayered conflicts revolves around building “security cooperation” with state partners to improve counterterrorism capabilities, ostensibly providing protection to communities that states cannot. Concurrently, the US military is typically the prime diplomatic entity for high-level bilateral engagements. The result is that the US military is propping up the public authority of weak states, albeit in an ad hoc fashion that lurches from crisis to crisis. Regardless of the reasons for US presence, there is hardly any deep public support for these operations; about 60% of US citizens do not view these kinds of conflicts as a security threat, and more than 90% oppose US invasions, even if weapons of mass destruction were in use. “For the first time in recent memory,” US international relations scholars John Mearsheimer and Stephen Walt write, “large numbers of Americans are openly questioning their country’s grand strategy.” Even within the Department of Defense, these doubts continue to periodically arise. As former Defense Secretary Mark Esper testified in February 2020 to the House Armed Services Committee, conventional forces in Niger, Chad, and Mali “[need] to go back to home so they can prepare for great power competition. ”Due to war fatigue, the US has resorted to “externalizing the strategic and operational burden of war to human and technological surrogates,” creating what some scholars call a form of “surrogate warfare.” One example of “externalizing the burden of war to the machine” is a tool created by the Defense Innovation Unit and deployed at the Al Udeid Air Base in Qatar in 2017. Throughout its deployment, this tool monitored and rapidly combined social media feeds in Syria before relaying that information to pilots and ground troops, who then used it to identify, track, and strike targets in that area of operations. General Joseph Votel, then-commander of US Central Command, boasted of the model’s success and indicated that it would be replicated “in future operations.”

In its preparation for great power competition, the US military is modernizing its joint airborne intelligence, surveillance, and reconnaissance (ISR) capabilities by exploring the uses of artificial intelligence and machine learning techniques for target identification. The final goal is to “connect ISR sensors across all warfighting domains (space, air, land, sea, and cyber) directly with commanders and weapon systems, sharing data at an accelerated speed.” In Niger, this project has materialized as the deployment of the new Block 5 variant of the MQ-9 Reaper, a drone first used in Syria in 2017. The Block 5’s major upgrades include the ability to integrate and combine multiple data feeds, as well as to process this data more quickly. Since 2018, the US has similarly armed their drones in Niger. In this fashion, West Africa joins Syria as a place that has become a test bed for this new wave of ISR technologies.

The ISR modernization program follows prior US military investment in the region with projects like the Trans-Saharan Counterterrorism Partnership, a military aid package of $353 million. Currently, H.R. 192, or the Trans-Sahara Counterterrorism Partnership Program Act, is a bipartisan bill seeking to codify that partnership. In 2015, the US military began construction of an airbase at Agadez, Niger, next to a Nigerien military facility. Costing $110 million, Agadez “presents an attractive option from which to base ISR … assets given its proximity to the threats in the region and the complexity of operating with the vast distance of African geography,” writes Nick Turse, a leading watchdog journalist of US-Africa military affairs. US forces are not supposed to have a direct combat mission in Niger, but their ISR role means they support local troops undertaking counterterrorism operations against Boko Haram and similar groups. This support has led to one publicly known US tactical engagement and combat casualties.

These military initiatives contribute to the African continent’s status as a longstanding field site for experimentation that traverses the colonial and postcolonial eras. More recently, since the publication of the Berg Report, Africa has been a proving ground for the neoliberal thought that permeates development economics, advocating for structural adjustment policies while most foreign direct investment is concentrated in resource extraction economies. This thinking tended to stop well short of acknowledging the enduring damage done by colonialism on the continent. Niger’s colonial experience was particularly vicious, with French military violence used to “pacify” the territory. This trend continued in the lead-up to Niger’s 1960 independence, as French military forces suppressed opposition so the French state could consolidate control over uranium deposits discovered between 1957 and 1967 and other minerals useful for high-technology industries. Today, uranium from French mines accounts for about 70% of Niger’s exports, but tax exemptions mean that little of that value flows to the state or its citizens.

It is against this background that Niger provides a good case study of the intersection between the rural poor’s land struggles and US military presence. Most Nigeriens are subsistence farmers whose land tenure rights are insecure. The country is susceptible to frequent drought and severe food shortages, conditions which have been exacerbated by climate change. As of 2004, 9% of Nigeriens (about 870,000 people) were enslaved or lived as bonded laborers. As there are few formal political channels or avenues for dispute resolution, conditions are ripe for rural rebellions. Mediated through religion, these rebellions are antagonistic toward a state that is unable to consistently provide services; indeed, rebel groups present themselves as a viable counter governing authority to  the weak Nigerien state. But for the US, assisting the Nigerien state in putting down these rebellions is coded as counterterrorism, a rhetorical move that misunderstands the basic drivers of local conflict while also supporting the very forces that cause these rebellions.

One way of thinking about the US military’s Niger operations is to see them as laboratories for warfare, testing new forms of observability and lethality guided by the US state’s algorithmic gaze, the components of which are built from the kinds of metals and minerals that are extracted from Niger’s mines. Arguably, because of strategic non-oversight, West Africa is conducive for testing these weapons systems and assessing how they form a kind of “predatory formation” that spans from the borders to the hinterlands of the world.