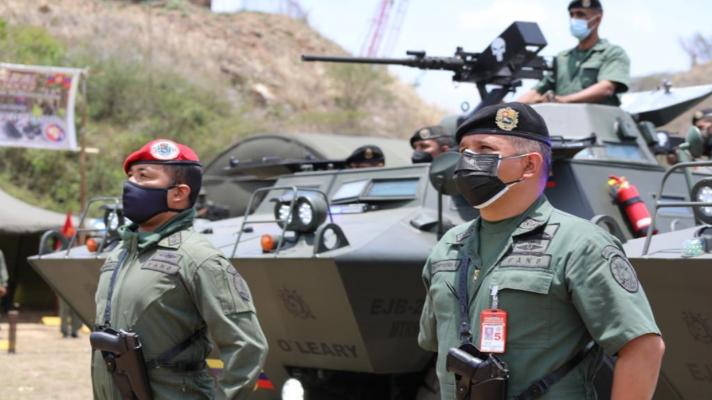 FANB deployments on the border with Colombia in the state of Apure (Photo: Archivo)

Since the events in Apure, a number of incidents on the Colombia-Venezuela border have been reported in the international media, hinting at a military conflict in the making during this pre-electoral year, which is expected to be the end of Uribism’s term in the Colombian presidency, at least through the electoral process.

FROM WHAT IS PUBLISHED TO WHAT REALLY MATTERS

The first and most publicized incident was the flight of a US Boeing 135 W aircraft, which allegedly was the most advanced signals intelligence platform of the US Air Force.

The aircraft would have departed from Nebraska (United States) to the Colombian Arauca to carry out intelligence gathering for four hours, according to WebInfoMil, presumably on “the electronic order of battle of the Venezuelan armed forces (sic) and their tactical and strategic disposition on the ground, following the massive military deployment that has taken place in the last fifteen days in the border region. Likewise, thanks to the great espionage capabilities of this sophisticated aircraft, the U.S. operators were able to analyze the entire electromagnetic spectrum of the region, gathering information from radars, communications, air defense systems, cellular signals, electronic warfare systems and clandestine radio stations”.

Although this maneuver was presented as something extraordinary that demonstrates the perception of Venezuela as a growing threat against Colombia, namely, against US interests in the region, its disproportionate publicity in at least 20 of the media traditionally involved in the media war against the Bolivarian Revolution indicates more of a psychological warfare and dissuasion operation than an intelligence one.

It should also be added that this action was not covert and, according to the first media reports, the information was obtained through open sources and programs that register the position of the aircrafts through the ADS-B system.

This is also not the first time that maneuvers of this type of aircraft have been known on Venezuelan borders: since 2019 Venezuela has reported these flights in the Caribbean region near its borders, and in October 2019 the Venezuelan Comprehensive Defense Aerospace Command reported the unauthorized incursion of an aircraft of this type in Venezuela’s flight information system at the “Simón Bolívar” International Airport of Maiquetía. The media reports at least three more flights of this type in the last two years along the Venezuelan borders.

There are countless mechanisms by which the United States illegally collects information in the world; the radar system located in the Caribbean islands and in Colombia itself have been part of this for many years.

Colombian media also say that this flight over Colombian territory is unprecedented and that it would signify an increase in the “support” of the United States. Some question what this means for Colombian sovereignty -a question that certainly persists in some sectors of the Military Forces-, but the reality is that the little sovereignty that Colombia could preserve was lost when it joined NATO as a “global partner” in 2016.

In this regard it is worth noting that NATO has been making deterrent military moves around the world since Biden came to power to threaten China and Russia, to which both powers have responded with unusual military deployments, without any real military conflict breaking out so far.

The new administration in Washington seems eager to make its permanent surveillance power felt again around the world to regain its fractured strategy of full-spectrum dominance, and while it remains the most militarily powerful nation on the planet, emerging powers and non-subordinate countries are making inroads here as well.

Meanwhile, for the diminished uribista government, the war of distraction with Venezuela is a tool that may be useful to prevent its electoral debacle in August 2022.

More precisely, the second event that took place in recent days at the binational border happened in a municipality called Distracción in Colombia’s La Guajira, at the Buenavista military base where the Colombian Minister of Defense summoned the media this weekend for a small artillery exhibition and, of course, took the opportunity to harangue against the Bolivarian National Armed Forces (FANB) to continue heating up the atmosphere.

But what was really important was under publicized. In the first days of April, one of Colombia’s largest newspapers published an article on the arrival of new paramilitary contingents in Cúcuta and their alleged alliance with the Army. These paramilitaries of the group known as the AGC (in support of the denunciation of the crime of “memoricide” denounced by Gloria Gaitan before the Permanent Peoples’ Tribunal last March, we refuse to name this group of narco-paramilitary terrorists by the name they have given themselves and choose to refer to them only by their initials) arrived in groups of 40 in small planes from the Urabá region of Antioquia to support the Los Rastrojos paramilitary organization after, according to the journalist, they were expelled from Venezuela and were defeated in Colombia by the National Liberation Army (ELN) in Catatumbo and the rural area of Cúcuta.

This guerrilla organization provided more details on its web page this week and warned that it would be a battalion composed of 400 paramilitaries that would be placed under the orders of the Security Force Assistance Brigade (SFAB) that arrived in Colombia in May 2020 and that, contrary to the initial announcements of the Colombian government, is still in the Vulcano Joint Task Force located in Tibú.

Among its objectives is the return of these Colombian paramilitary groups to Catatumbo, a river of strategic value that originates in northeastern Colombia and flows into Lake Maracaibo in Venezuela and the state of Táchira.

FEAR OF THE PEOPLE IN ARMS MAKING HEADLINES

The defeat and expulsion of the paramilitary groups in Catatumbo and Táchira was a product of the operations in defense of Venezuelan sovereignty carried out jointly by the FANB, the political leadership of regional authorities such as Freddy Bernal and Omar Prieto and, of course, the organized communities of the border, and which deepened after the victory of the Battle of the Bridges (February 2019) until reaching the success that they are threatening to reverse today.

Judging by the reactions, it is these people who have surprised them the most and whom they most fear. In part because they actually believe their own lies about “the Venezuelan dictatorship” and contradict themselves by showing that there is a popular power with the will to confront its regular and irregular incursions.

So, although the reinforcement of the Venezuelan armored vehicles also occupied the attention of the Colombian media, even highlighting the land power of the Venezuelan Army, the biggest international scandal in the global media corporations was caused by the order given by President Nicolás Maduro to the Bolivarian Militia, on its anniversary week, to send a thousand militia men and women to the state of Apure.

France24, DW, BBC, are some of the major networks that reported this fact as the most important event of the week in the binational border.

Apparently they are unaware that the Bolivarian Militia has a chain of command, uniform, internal regulations and, ultimately, is a special component of the FANB in accordance with the Law. They attempt to caricaturize it and even equate it with paramilitary organizations, but they are struggling between underestimating it or describing it as a fearsome monster. The only thing that is clear in all the reviews about this decision of President Maduro is that it scares them.

They are well aware that this contingent will come mainly to support the popular organization, but they are also aware that the social fabric on the border is the strongest barrier to defend the sovereignty they would like to violate.

The Prolonged People’s War laid the foundations to build the China that today disputes the world leadership of the United States. The People’s War ordered by President Maduro and that media are trying to portray as obsolete inflicted an unforgettable defeat on them at the Bay of Pigs.

The undeniable experience of the Colombian Public Force in irregular warfare that today is at the service of NATO against Venezuela has an extensive record of crimes and violence against the Colombian people, but to tell the truth, it does not have any important military victory to boast about, which is why they are well aware of what they should be afraid of.