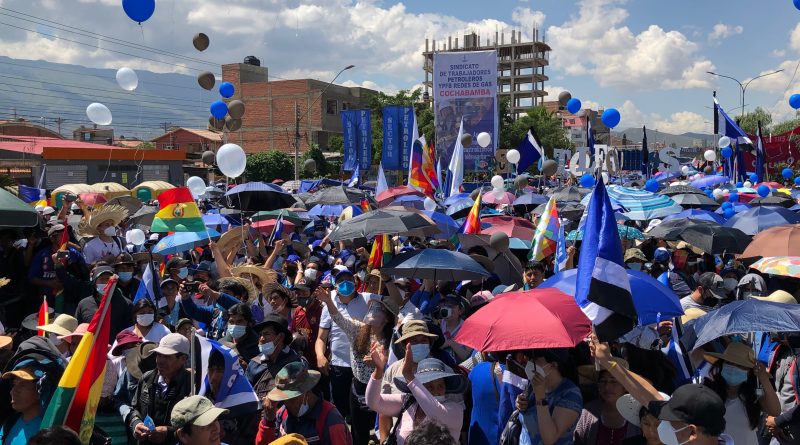 The Movement Towards Socialism (MAS) held an all-bases mass rally in Cochabamba to defend Bolivia’s restored democracy and to demand justice for the crimes of the coup dictatorship.

The gathering, called by the departmental MAS, the FSUTCC, Bartolina Sisas and 6 Federations of the Trópico, was attended by President Luis Arce, Vice President David Choquehuanca and national MAS leaders including the movement’s President, Evo Morales. Other participants included the Pacto de Unidad, lawmakers, and all sectors and social movements of the MAS in Cochabamba. Victims and families of the Huayllani, Sacaba massacre also attended.

With stages and bands set up at the Viaducto at Blanco Galindo Avenue, the event spanned over 1.5 kilometers, with crowds, flags and banners as far as the eye could see.

In addition to reaffirming the unity of social organizations and demanding justice, the militants resolved to defend against any new attempts by the U.S. and OAS-backed right-wing to destabilize the country and prepare another coup. Organizations have vowed to support the Arce government so as to never allow a repeat of 2019 and want to see the economy recover from the collapsed state left by Añez in November 2020.

President Luis Arce took the stage to denounce that the right-wing are once again scheming in preparation for a new coup attempt and destabilization as a result of their failures at the ballot box, saying there are both foreign and national interests that don’t want Bolivia to live in peace.

“The right-wing has its strategy, it has wanted to divide us, it has wanted to (act) as if the right-wing had won. The people have won, we have triumphed at the ballot box time and time again and we continue advancing. We have more and more obligations with the Bolivian people, therefore, and the Bolivian people put their trust in the largest political instrument we have in the history of the country.” 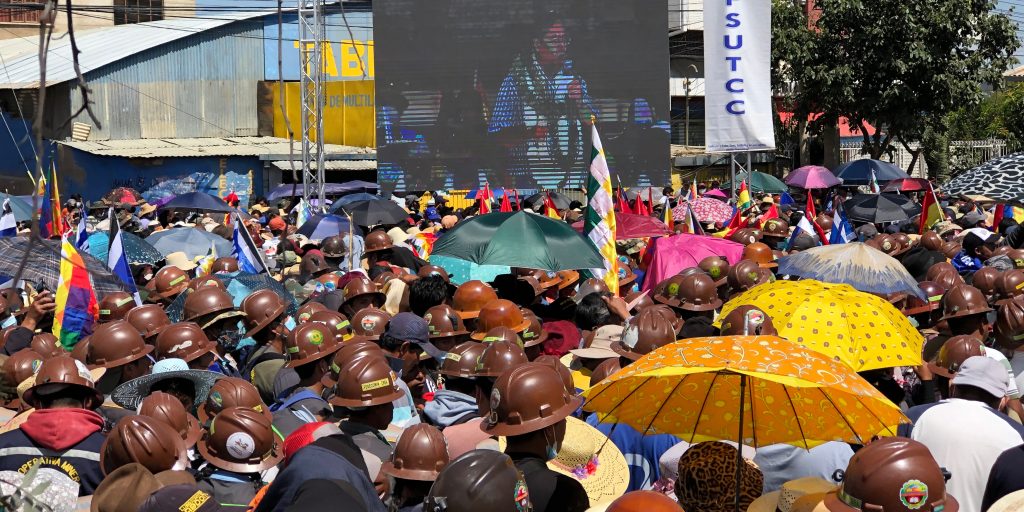 Headlining the act was Evo Morales, who put the coup and its defeat in context and thanked Cochabamba’s organizations which not only actively fought against the coup but also were the last to see Evo depart from the Trópico region and demanded his immediate return. He said that the obligation of the militancy is to support President Arce so that the country can resume the path of economic growth.

Evo remarked on recent developments in Peru, with a first round win by Pedro Castillo, saying the candidate is running on the same platform as the MAS did when it first came to power. Pleased by recent developments in Brazil, Evo said that with Lula’s potential run for presidency, Brazilian workers may be able to once again take power.

Evo Morales gave a shout out to Peru’s presidential candidate Pedro Castillo and says Castillo’s platform is similar to the MAS. pic.twitter.com/0fnFn2TJFs

The influence of the MAS and project of liberation transcends borders, and for that reason, Evo said social organizations of the region will hold a preparatory meeting in the coming days to advance RUNASUR, in order to integrate all of America.

Evo reiterated the demand for justice for the dead, wounded and persecuted during the period of November 2019 to November 2020 and called on judicial authorities to act on justice and truth.

The people of Cochabamba, Bolivia, arrive for the MAS rally, in defense of democracy, justice and President Luis Arce. pic.twitter.com/zrT0LmmqAC

The mobilization was called on April 5th as frustration boiled over in response to the lack of convictions of former coup functionaries and what social movements saw as an excruciatingly slow process to bring about justice for the massacres committed by the Jeanine Añez’s regime. Añez and two other ministers were issued arrest warrants and pre-trial detention in March, five months after the new MAS government took office.

Despite the gravity of the human rights abuses of the year-long coup, two key Ministers with direct involvement in the deadly repression of 2019 were able to flee, while other members of coup loyal security forces have been released with conditions as investigations continue.