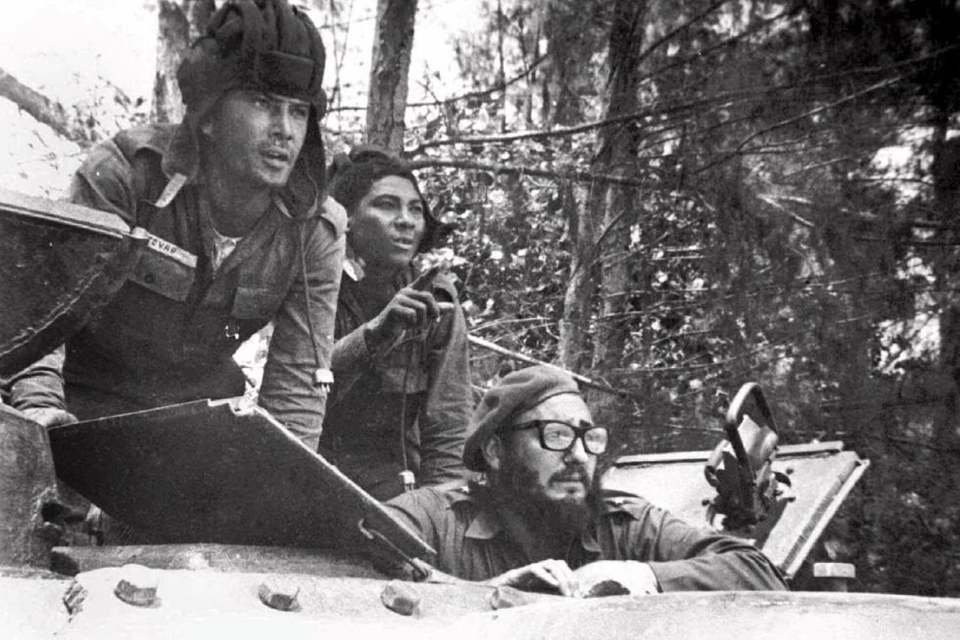 Fidel Castro led the defense of his country on the battlefield.

In “Secrets of Generals”, a book by Cuban Luis Baez, a high-ranking officer, Enrique Carreras Rolas, recounts that Fidel Castro called him at 4:45 a.m. on the morning of April 17, 1961. “Take off and get there before dawn. Sink the ships carrying the troops and don’t let them leave. Understood?”. That was the order. The military man was one of the few experienced pilots of the revolutionary aviation. In total there were only ten who flew as many patched-up planes, “discharged,” he said. Based on such events, Cuba made its antiimperialist epic. This Saturday marks the 60th anniversary of the heroic deed that ended in a resounding failure of a mercenary invasion, but above all of the United States, the CIA and John F. Kennedy. In 66 hours, the attempt to consolidate a beachhead on the island put an end to the secret plan that had been started by an American general: President Dwight Eisenhower. Operation Pluto ended as quickly as a Walt Disney cartoon.

The day of the invasion, the U.S. agency UPI (United Press International) dispatched a cable from Mexico that has earned a place in the museum of fake news: “Prime Minister Fidel Castro has fled and his brother Raul was captured. General Lázaro Cárdenas is arranging political asylum for Fidel. Stop.” Far from that description, the historic leader of the Cuban revolution had led the defense of his country on the battlefield. In the same book, another general, Samuel Rodiles Planas, recalled in 1996 that after writing the victory report from an improvised dock, “Fidel began to turn the lights of a lantern on and off. I asked him why he was doing that and he answered me: ‘To see if they are mistaken, they think it is the mercenaries, they are coming to rescue them and we will shoot them with cannons'”. Playa Giron had already been recovered, but Castro wanted to continue fighting.

William Price Gray, editor of the international pages of Life magazine wrote: “Fidel’s espionage service was certainly superior to the CIA. It was simply a monumentally ill-conceived military adventure…” The self-styled Brigade 2506 ended its brancaleonic adventure with 1197 prisoners, twelve planes shot down, two transport ships sunk and several more damaged. But also, as an inexcusable mark of U.S. intervention, the corpses of four U.S. pilots remained: Captain Thomas Villard Ray, Major Riley Shamburguer and navigators Frank Leo Baker and Wado Carroll Gray. The invading force had tried to confuse the Cubans with a decoy that they did not fall for: they camouflaged B-26 aircraft with Revolutionary Armed Forces (FAR) insignia to make them believe that an internal rebellion was underway.

It was on those swampy and crocodile-infested shores, near the Zapata Swamp, 211 kilometers southeast of Havana, that the events took place that are still remembered today: “Playa Girón, the first defeat of imperialism in Latin America”. The previous days’ bombing of the airports Ciudad Libertad in Havana, Antonio Maceo in Santiago de Cuba and San Antonio de los Baños had been of no use. The US wanted to disable the precarious fleet of Cuban airplanes but Fidel, astute, had them bomb those that were out of service. Nor were the FAR intimidated by the bombings of an electric power plant, the fires that caused the loss of 300,000 tons of sugar, 42 tobacco warehouses and two paper factories. “The rebel army is the people in uniform”, said Camilo Cienfuegos – one of the revolutionary leaders – and he knew how to respond to the invasion.

On January 3, 1961, Eisenhower had broken diplomatic relations with Cuba. On February 3, 1962, a year and a month later, Kennedy would sign Presidential Executive Order 3447 with which he set up the economic, commercial and financial blockade against the island, which is also on its way to its 60th anniversary. Two key events occurred between those two dates. On April 16, 1961, Fidel declared the socialist character of the Revolution. And on the 17th came Playa Giron, an invasion that he suspected was imminent. The attack, far from provoking a rupture in the population, galvanized them behind the commanders of the Sierra Maestra.

The adventure cost the U.S. government $336.1 million. Its mercenaries had departed from Nicaragua after training in Guatemala in training camps leased by the CIA. They even established one in Homestead, Miami, where a group of 140 counterrevolutionaries were trained but never managed to see action. The defense forces lost 147 men between militiamen and soldiers, although the official figures would raise the casualties to 156 as a result of the bombings of April 15. Their average age was 24 years old.

Among the prisoners taken on the 19th after almost three days of combat, were former soldiers of the regime of dictator Fulgencio Batista, large landowners, big businessmen, industrial magnates, lawyers, actors and lumpens recruited for a daily pay of $175 for the single and $225 for the married. They disembarked at Playa Giron together with ships with distinctive names: Houston -the first to be damaged-, Atlantic and Lake Charles.

Their armament exceeded that of the mobilized militias and the FAR: 16 B-26 planes, eight C-46s, six C-54s, 76 and 75 millimeter cannons, 4.2 mortars, Garand rifles, M-1 carbines, bazookas, pistols and ammunition. Liters of jet fuel went down with the Rio Escondido ship that was hit by a plane. Nature also sided with the Revolution. Coral reefs destroyed or delayed some of the landing craft. Cubans who participated in the invasion still complain about the ineptitude of the CIA that failed to foresee these problems in the area of Playa Giron.

The civilian head of Operation Pluto, Manuel Artime Buesa, a doctor who left the island as soon as the revolution triumphed, became a CIA agent for all services. After training in Guatemala, being captured in Cuba and released several months later, on December 29, 1962, he was one of Kennedy’s main hosts at the Orange Bowl stadium in Miami, where the former president was presented with a flag from Brigade 2506. A traditional theater has been named after him in Little Havana since 1982. In June 2017 Donald Trump gave the first speech on Cuba as president at his Miami facility, where he announced the tightening of economic sanctions.

The history of the United States and its policies against the island is a circular one. Sixty years ago it called for an invasion. Through the CIA, it tried to assassinate Fidel 638 times. Since it failed with both strategies, it has maintained an unalterable blockade that has been in place for almost six decades. But Playa Giron, like Vietnam, was a watershed in its military defeats. In Cuba it signifies the opposite: it is one of its great epics.