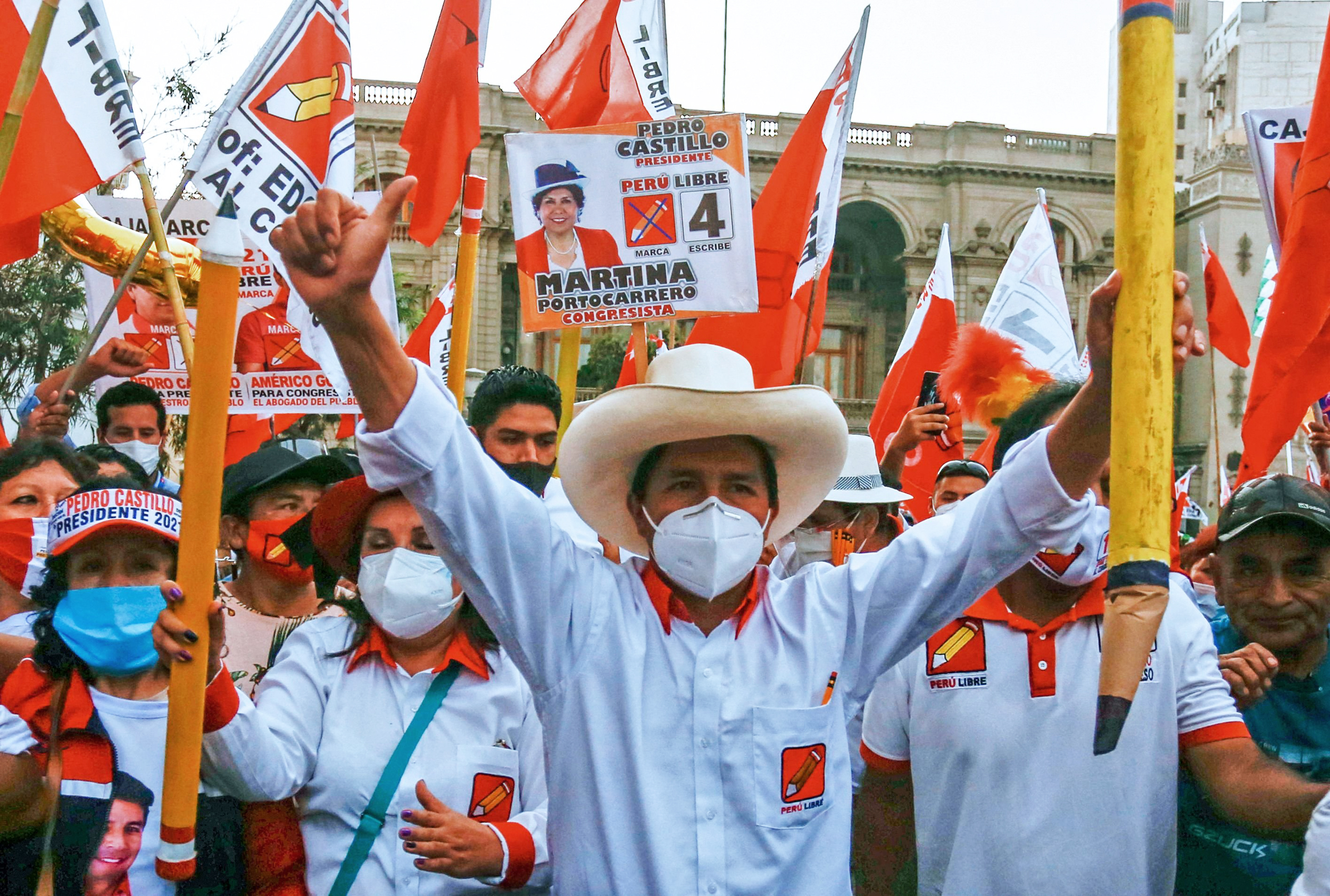 In this interview we speak with Guido Bellido Ugarte, congressman-elect for Cusco, closely linked to Pedro Castillo, who has won the first round in Peru. Bellido, like Castillo, belongs to the Peru Libre party and is determined to fight hard in this campaign that will continue until June so that the rural teacher and farmer from Cajamarca can achieve a repeat victory, this time against the ultra-right-wing Keiko Fujimori.

I would like to ask you, how and why have you enrolled in this electoral battle in which you have been elected congressman?

My dear Carlos, I salute the great fatherland and each one of the brothers and sisters who are fighting today for the conquest of the rights of the excluded peoples, as a result of the barbaric application of neoliberalism in our countries. We have never been unaware of this, because of the most aggressive application through the Fujimori government and the 1993 constitution, which is responsible for the plundering of natural resources, of the contract laws, of the detour of our country’s strategic companies. In this context, I participated as a candidate for the Congress of the Republic in Cusco, one of the most important regions of Peru culturally and also historically. Our participation is also due to the consolidation of our bases. I am part of the national leadership, and I have experience in university classrooms, where we have assumed the leadership of the University Federation of Cusco. There we worked directly with social organizations defending the rights of students and the rights of the population. This background allowed us to join the process of registration and legalization of the political party Peru Libre since 2015 and from this we reassert ourselves as leaders responsible in a consistent and loyal way in the militant party work to bring about changes that the people have been waiting for.

Let’s talk a little about the candidate Pedro Castillo Terrones. As you may have seen, both in Peru and in Latin America, the stigmatizing campaign claims that “his victory was a surprise”, that “an ultra-leftist friend of the Shining Path” has won and that “he has no chance of becoming president”. I would like you to describe who Pedro Castillo is and why you think he has the support of people from the rural areas, as well as the support of many inhabitants of the Capital.

First of all, this is work that has been going on for many years. Our political party Pueblo Libre is clearly defined as a socialist left party. This is because the party has developed committed and structured bases in all regions of the country. We participated in the extraordinary election of 2000 where we had a first result of half a million votes. This organizational capacity, structure and program developed by the party, which includes the marginalized and deep-rooted peoples of this country, has achieved a perfect combination with a presidential candidate, Pedro Castillo Terrones. We want to emphasize this: Pedro Castillo Terrones is a teacher who has been working in a multi-grade school teaching fifth and sixth grade. Here in Peru, a multigrade teacher is the last teacher geographically, because the teachers who work in multigrade schools are in the most remote places and communities, where there is no possibility of having independent classrooms, where the children have the greatest difficulties learning. But, nevertheless, we consider this characteristic to be important. It shows that there are more than 400 thousand teachers. Another important characteristic is that Pedro Castillo is a rondero, that is, a person who guarantees the tranquility of the families. He guarantees that no family can be bothered by criminals, he guarantees tranquility, he administers justice to a certain extent. Pedro Castillo is a rondero, in his region in the north of the country, in the Cajamarca region, Chota province. A third characteristic is the result of low salaries, teachers always complement their work with other jobs. In order to have better conditions to feed his family, Pedro Castillo, in addition to being a teacher, is a born farmer. He farms and produces from the land.

Finally, and most importantly, he is a candidate who cares about his family and his daily activities, and is also a teacher who has made political and ideological progress. This progress has made him the national leader of the teachers’ union. Being a leader implies placing the collective interest and that of the citizens as a whole before individual interests. These four characteristics are pillars and we are not going to find them in any of the 17 candidates representing the right wing.

Incidentally, in all previous elections we have always had two candidates on the right so that we vote for the less evil one. This time, we have a single clear candidate, who represents the great majorities. These conditions have made the population advance with much optimism and security to the republican life after 200 years of corruption, 200 years of plundering of natural resources, 200 years of discrimination, today we have the return of the great Tupac Amaru II, under the person of our brother Pedro Castillo Terrones. A man who has no debt with justice. A simple man, dedicated to the cause of our people, and as he has said very clearly, that we are not radicals, we are not terrorists, we are those who carry hope, consistency, loyalty to the people and we are not going to renounce this aspiration of our people at any time. We are going to fight until victory and beyond.

There is a substantial issue in what Peru Libre and its current leadership are raising, which is the Constituent Assembly. Are you willing to fight that battle? Will you count on parliamentary support, knowing that many congressmen do not want to hear about this subject?

Unfortunately, the previous congressmen have done their work with their backs to the people. Thanks to the neo-liberal fujimorist Constitution, the people have lost the power they should have always had. That power is held by the classic right-wing parties, who did whatever they wanted with the country. But we aspire to a new reality, where the organized people will play a very important role in the process of implementing a new political Constitution of the State. We are going to work with the social organizations. We are going to give power back to the people. Because the people must absolutely determine the course of our country. We trust the people and the people trust us.

The first thing we are going to do is to call for a referendum, so that the Peruvian people can determine whether they are in agreement or not with a Constituent Assembly. Subsequently, we will call immediately, within a short period of time, for a popular Constituent Assembly that will be composed of 40 percent of constitutionalists representing the political parties, and 60 percent, representing the Peruvian people. There will be a direct participation of the people, the social organizations, the unions, the universities, small and medium entrepreneurs and all lines of workers, both public and private. We dare to say that after 200 years there will be great changes in the country. We are going to make it possible for constitutional members to be elected by popular vote, for magistrates of the judiciary to be elected by assembly and popular decision, for ombudsman and other organs of the people to be elected by the people. For that we are going to return the power to the people and not leave it in the hands of the right-wing parties that have usurped what belongs to the great majorities.

You are aware that the right wing is going to unite around the candidacy of Keiko Fujimori, a sinister character for Latin America and even more for Peru. What are the possible alliances that Pedro Castillo’s candidacy may have?

First, we value and we are going to win alliances with social organizations, unions, producers, peasants, workers from different markets, in fact it is a complete alliance with the people. Second, we will dialogue with the different political sectors, however, in that conversation we are not going to mortgage the party. We are not going to mortgage the country, the neighbors of the homeland, we will not enter into the distribution of ministries. If so, we would be repeating those previous practices that divided the country as if it were a cake. We understand that direct conversation with the people cannot be replaced by a conversation with certain political party leaders. That ends up in agreements that in the long run do great and irreversible damage to the people, to the organizations and to Peru as a whole. That is why the first line is the alliance with the people. Secondly, there will be dialogue with the political forces.

What is your position on a critical issue, which always shakes Peru, which is extractivism, mega-mining, everything that means the entry of transnationals into our countries with the idea of plundering?

First of all, we propose the nationalization of gas, the drafting of the contract laws, which are important points and have a lot of support among the population, and at the same time we believe that it is very important to recover the country’s strategic companies in the energy field and mining field. But to have a developed country like Peru, it is necessary to establish driving forces in the country, such as education, for which we are going to allocate 10% of the GDP. We are going to build health and agriculture on this basis. Once quality education is in process, we are going to start to move towards an industrialized and knowledge-based economy, a modern economy, instead of remaining in an economy based on extractivism and on the gross sale of raw materials. We know very well that these sales, in the international market, actually acquire four or five times the value of their costs with which they have been purchased. So we have a very clear horizon of where we are going and what we need for this beautiful country, Peru.

You started talking about the Patria Grande, it would be optimal to conclude this interview by telling what you foresee as foreign policy as far as the continent is concerned. As you well know, North American imperialism is advancing in different ways over our peoples. How do you see Peru governed by Pedro Castillo, regarding foreign relations in this aspect?

Once Pedro Castillo Terrones assumes the leadership of his country, he will be the spearhead of the Latin American unity of the profound peoples. We consider that the unity of Latin Americans must be the alternative to the Lima Group, which has been formed to oppress and condition the countries of the region. An independent and sovereign Latin America is our aspiration. On this issue, Peru is strategic. Once the people assume the leadership in Peru, the great homeland will be strengthened, Latin America will be strengthened from the profound peoples. Independence will be strengthened and its relations will be strengthened. Today Peru is, in practical terms, a neo-colony, directed by the United States and its economy is managed by international organizations. This must end in Peru as well as the interference of different countries and international organizations through Non-Governmental Organizations (NGOs). Many parties such as the Juntos por Peru Party, led by Veronica Mendoza, claim to be left, but are not. She has no ideological or class formation, much less a commitment to the population, and has been implementing and imposing the agenda of the NGOs that operate at the international level. We clearly reject any hint of these sectors that respond to the capital of the transnationals operating in our countries.