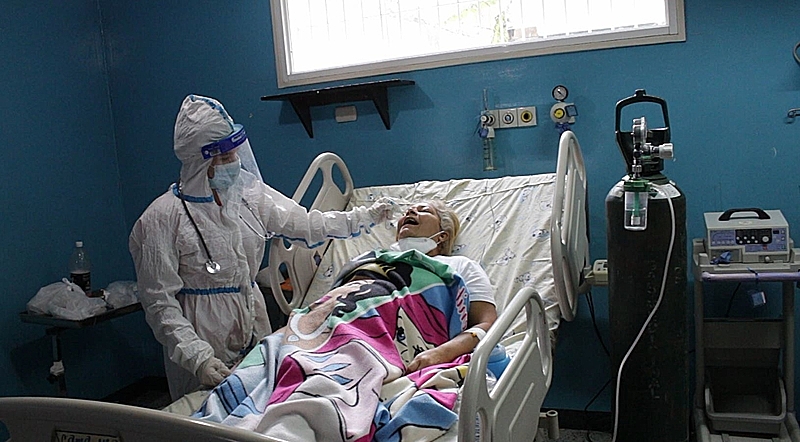 Venezuela is experiencing its worst moment since the start of the covid-19 pandemic. With more than 174 thousand cases and about 1.2 thousand deaths, the country jumped from an average of 27 infections for every 100 thousand inhabitants in March, to 48 per 100 thousand people in April.

The spread of the Brazilian variants, P1 and P2, was one of the main factors behind the current scenario. Despite the fact that the country has a recovery rate of 90% of patients, in the first half of April 2021, there are more than 15 thousand active cases and 99% of hospitals are at capacity in the Capital District, in Miranda and La Guaira – the states worst affected.

“We were certain that, after facing a year of in this pandemic and with a majority of patients being asymptomatic, we could overcome this, but these new strains are very aggressive,” says Whitney Rivas, a surgeon and general coordinator of the Caracas Immediate Action Brigade.

“A characteristic of these new variants is that the patient’s condition advances much faster. The patient gets worse in less time after the diagnosis, there are even patients who before having a positive diagnosis, already have breathing difficulties, in need of breathing devices”, reports Ricardo Blanco González, a surgeon and coordinator of epidemiology of the brigade in Caracas.

Reports from patients with the novel coronavirus confirm that the first symptoms are of a common cold, however, within a few days the blood oxygenation level drastically decreases.

“It took me seven days to go to the [field hospital], because before what I felt was a headache and I believed it was a simple malaise. When we see that we have a fever, we should not be in doubt if it is the flu, because if not, what happened to me will happen again. I am a hypertensive person and I wasted a lot of time”, reports María Isabel de Romulo, a patient hospitalized for 14 days with covid-19.

By the middle of April, about 99,000 Venezuelans from priority groups were vaccinated: health professionals, military, politicians and the elderly. The country also announced that it was able to pay all dues to the WHO required to enter the Covax system, which provides enough doses to immunize 20% of the Venezuelan population by the end of 2021.

Last week, the Executive branch also announced the start of production of the Cuban made Abdala vaccine, which will be distributed by the Bolivarian Alliance of the Peoples of Our America’s (Alba-TCP) vaccine bank.

In addition to seeking alternatives to accelerate its vaccination campaign, Venezuela is also betting on basic sanitary measures in order to curb contagion. The country spent three weeks in radical quarantine and increased the number of popular health brigades, which engage in house to house research.

The country’s territory is divided into integral community health areas (Asic), to help organize preventive work, identification and treatment of patients. In Caracas alone there are 46 Asics with teams of doctors, nurses, health agents and community leaders.

After positive cases are identified with rapid tests, patients are taken to healthcare hotels, where they must remain isolated until the result of the RT-PCR exam. Then the patients are evaluated, the mild cases remain in hotels or health centers. On the other hand, moderate and severe cases are taken to hospitals.

“Nowadays, I can say that our work is integral. Always hoisting the flag of prevention first. Our main message is for people to be aware. We must put safety measures into practice. We have to be aware that by helping ourselves, we help others”, comments Glendolis Mendez, another medical surgeon who is a member of the brigade.

In Caracas, 4 thousand hospital beds were made available. The Poliedro Centro Poliesportivo was adapted to receive, 900 intensive care patients (in ICU beds) indoors, and to have an outdoor field hospital that serves an average of 450 people a day.

During screening, professionals measure the oxygenation level of patients to define priorities.

“This is our system. Does it have errors, failures? Sure, but with a blockade in place, who wouldn’t have limitations? However, I believe that we are built based on inclusion, on humanism, on a sense of belonging”, comments Witney Rivas, the group’s coordinator.

Since the beginning of the pandemic, Russia, China and Turkey have sent around 500 tonnes of humanitarian aid to Caracas. Venezuela proposes exchanging vaccines for oil to increase the number of doses in the country, and insists on that their assets blocked abroad be released.

According to Vice President Delcy Rodríguez, there are about 7 billion Venezuelan dollars being held in foreign accounts across Europe and the United States.