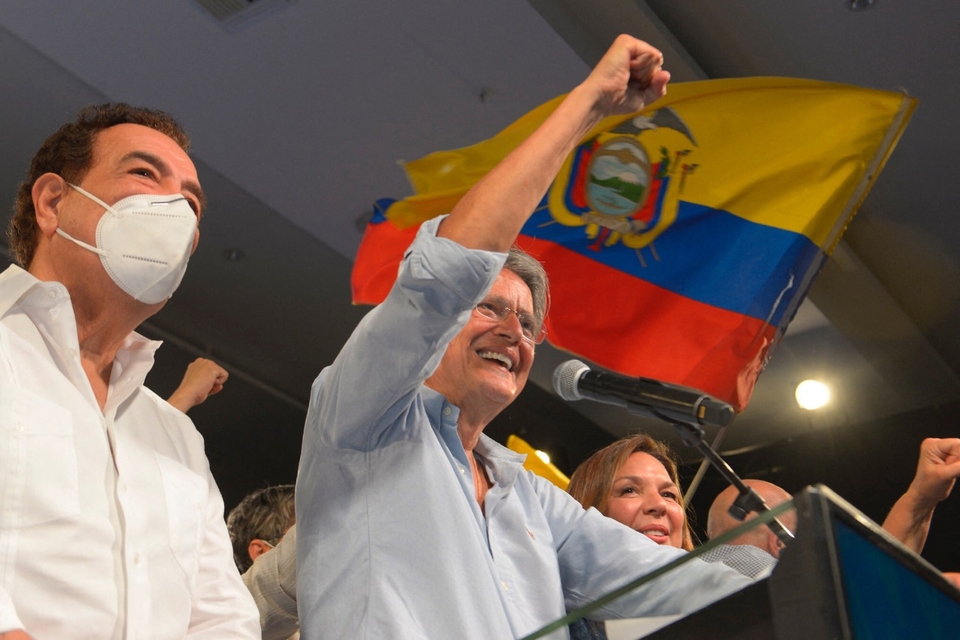 The right-wing candidate obtained 52.51% of the votes against 47.49% of his progressive rival, a result that was not anticipated by pollsters.

Guillermo Lasso won the presidential elections against Andres Arauz in Ecuador. He obtained 52.51% of the votes against 47.49% with 93.29% of valid ballots of the total of 97.60% counted. The results were delivered in the early hours of election Sunday night by the National Electoral Council (CNE), after a nationwide election day that took place between seven in the morning and five in the afternoon.

The result contradicted what had been predicted by most of the polls, which, for weeks, predicted Arauz to be the winner with varying percentages. The null vote was 1,660,802 and the blank vote 163,913, out of a total of 10,211,652 voters. In this way, the candidate of the CREO alliance and the Social Christian Party won the victory to assume the presidency on May 24.

“We are going to work from tomorrow on the vaccination process, we are going to work with determination so that 17 million Ecuadorians, without leaving anyone behind, benefit from the change of a democratic, free, prosperous country, a country of freedoms, where no one has to be afraid, tonight at night we will all be able to sleep in peace and calm. I do not come with a list of who I want to persecute or see in jail, I want to see all Ecuadorians free, who are not afraid of the government,” he said.

“Thank you for giving me the opportunity to be your president and to be able to serve you. Today is a day of celebration, democracy has triumphed, all of you have used your right to choose and have opted for a new course very different from that of the last 14 years in Ecuador. From May 24, we will assume with responsibility the challenge of changing the destiny of our country and achieve for all the Ecuador of opportunities that we all long for”, he said.

“I want to say goodbye asking everyone to feel protected by the national tricolor, the only flag that unites us 17 million Ecuadorians, I want to ask God to continue blessing us (…) dear friends, may God bless Ecuador”.

Arauz, on his part, affirmed in his declarations: “today the time has come to move forward, we have to build bridges, this is an electoral setback, but in no way a political and moral defeat, because our project is a project for life. I will make a phone call to Mr. Guillermo Lasso, I will congratulate him for the electoral triumph obtained today, and I will show him our democratic convictions”.

“The more than four million votes that accompany me today are a mandate, a commitment to defend policies that accompany and promote social justice, dignity, education and public health. With all our political and legislative strength, which makes us the main political force of the Republic of Ecuador, we will be attentive to any attempt to use the State for the benefit of the privileged few, we will be, as we have always been, defending the great majorities”, he said.

“We have the objective of being able to build that new majority, that historical block, represented by progressivism, plurinationality and social democracy, are constitutive elements of our State, of our Constitution, and must be reflected in the progressive popular majority that Ecuador requires. Today is not the end, it is the beginning of a new stage of popular power”.

The percentage obtained by Lasso meant having reversed a distance of more than 12 points that had separated him from Arauz in the first round. There are several reasons why it happened, such as the agglutination of an anti-Correista vote in a country marked by the Correaism/anti-Correism cleavage, the migration of voters from Yaku Perez and Xavier Hervas -third and fourth in the first round- in favor of Lasso.

Arauz’s defeat can also be explained by limitations in his campaign, in the framework of a movement with persecuted politicians, with leaders outside the country and little organizational structure. “We arrived at these elections in very complex conditions, we all know that we have been victims of persecution, harassment, insults, hatred, the attempt to proscribe our movement, attacks on individuals, on families”, said Arauz.

Election day passed without incidents. Both candidates were present in different voting centers. The first one, who has no residence in Ecuador, and therefore could not vote, was in the south of Quito -popular area of the city- together with his vice-presidential running mate, Carlos Rabascall. Both accompanied Silvia, a merchant in debt with a micro-credit, on the verge of losing her house and business, to vote.

“We have accompanied Silvia to vote, to exercise her right, her constitutional obligation, her opportunity to recover her dignity, her future, her hope in our country (…) we need a government of national unity, today we are here together with all the Ecuadorian people, we call for that unity, enough of fights, enough of quarrels, we want a government that attends to the majority, that provides solutions to problems, and we are here for that”, said Arauz.

Lasso, on his part, voted in the other electoral center of power, the city of Guayaquil, accompanied by his wife, María Lourdes Alcivar. There he affirmed: “this is a day where all Ecuadorians, with the power of the vote, can choose the future that our children and grandchildren will have, we all aspire to an Ecuador of opportunities, free and democratic, where all families can achieve prosperity”.

Both candidates called for the formation of a “unity government” in the context of a country in economic and health crisis, marked by the Correaism/anti-Correaism cleavage that crosses the whole of politics including the indigenous movement, the political betrayal of outgoing President Lenin Moreno, the deployment of a lawfare against Correaism which, in that movement, meant an institutional degradation and a reduction of democracy.

With Lasso’s victory, a new stage of deepening neoliberalism will now begin in Ecuador, which has already had its foretaste in the project to privatize the Central Bank of Ecuador, which could be carried out before Moreno leaves the presidential palace of Carondelet on May 24. The continental map will continue with the same correlation between progressive forces and right-wing governments, with the consequent limitations for the reconstruction of Latin American integration.