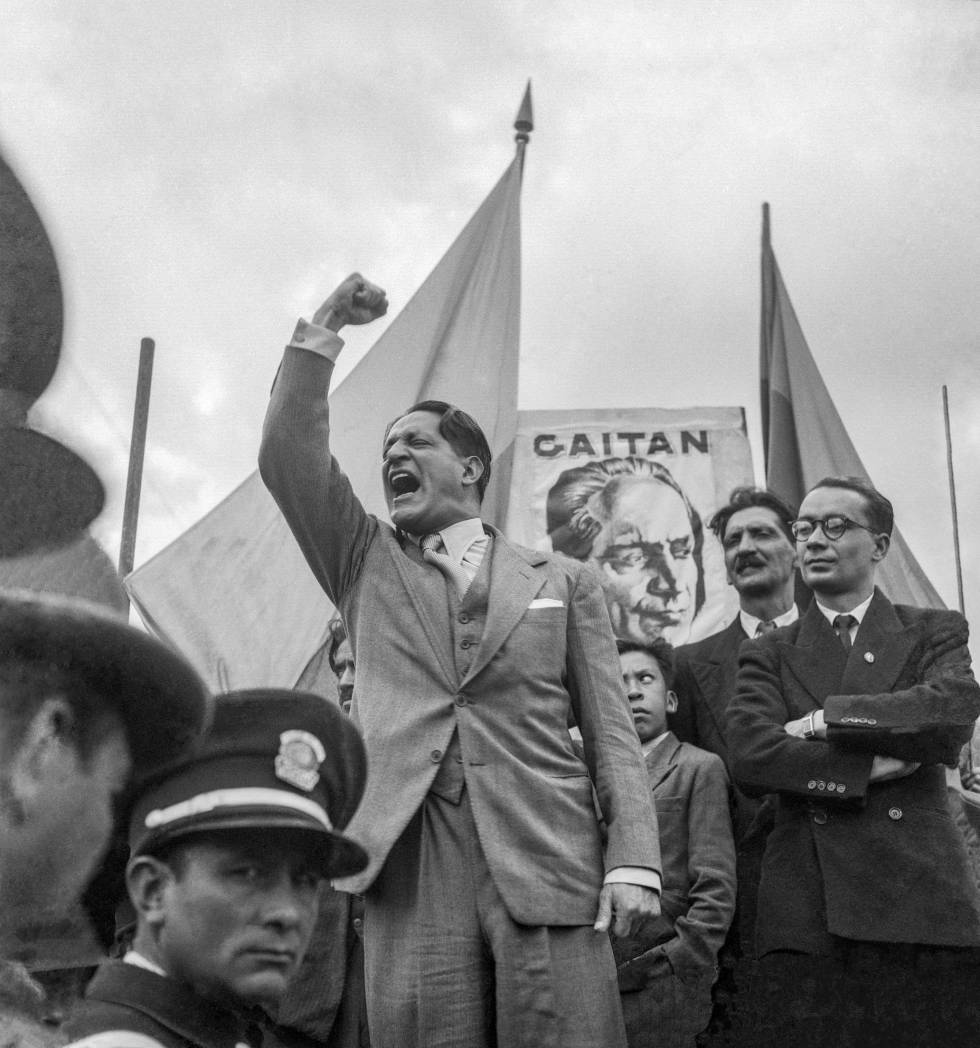 During the 1940s the charismatic orator and lawyer had steered the Liberal party towards socialism. Gaitán was leading the presidential race at the time, and likely would have become Colombia’s first left-leaning president. Instead, Gaitán was shot three times in the head in broad daylight, and it would take ten years and the interregnum of a military dictatorship for Colombia’s Liberal Party to regain the presidency. In any case, by that time the party wasn’t much different from the Liberals we are familiar with today — not left wing at all.

The assassination provoked an immediate violent riot known as the Bogotazo (the sack of Bogotá, or the shake-up of Bogotá). Five hundred Colombians perished in the immediate riots that engulfed the city, and at least 300,000 died in political violence over the course of the next ten years, known as La Violencia. Really, the guerilla war in Colombia, that is still going on today, can be traced back to this one incident. With the killing of Gaitán — the country’s most prominent voice for non-violent reform — Colombia saw its hopes for a peaceful path towards justice shattered in one blow. From then on, until today, the left-wing forces in Colombia would find their expression in armed struggle and the guerrilla movement, particularly through the FARC and ELN groups.

The city was left in ruins | Photo: Bogotá archive

At the crossroads of history

Gaitán had an appointment that very day to meet with a young Fidel Castro, only one hour after he took his last breath. Apparently Gaitán was considering expressing official support for a youth conference Castro had organized for later that week in Bogotá, and perhaps would have even spoken at the event (we’re just getting started here).

Another famous individual was in Bogotá that day, eating lunch just three blocks away from where the assassination occurred — the Latin American author Gabriel García Márquez. In his book Living to Tell the Tale he wrote about the murder at length:

“A group of men were dipping their handkerchiefs into the pool of warm blood to keep as historical relics. A woman in a black shawl and espadrilles, one of the many who sold trinkets in the area, held a bloody handkerchief and growled: ‘Sons of bitches, they went and killed him.’”

“In his speech he did not talk about Liberals and Conservatives or the exploiters and the exploited, like everyone else,” recalled García Márquez, “but about the poor and the oligarchs, a word I heard then for the first time as it was hammered into every sentence, and I hurried to look it up in the dictionary,” wrote García Márquez. “

At a recent Communist Party congress he had delivered an unexpected speech that surprised many and disturbed some of his middle-class party colleagues… His familiarity with Russian diplomacy dated from 1936, when in his role as Colombian ambassador to Italy he established relations in Rome with the Soviet Union.

“His relations with the Soviet embassy in Bogotá were very cordial, and he had some friends in the leadership of the Colombian Communist Party who would have been able to establish an electoral alliance with the Liberals, something often talked about in those days but never realized.”

Often recounted is the episode when, during a debate with the Conservative candidate for president, Gaitán asked his opponent how he made his living.

“From the land,” the other candidate replied.

“Ah, and how did you get this land?” asked Gaitán.

“I inherited it from my father!”

“And where did he get it from?” said Gaitan.

“He inherited it from his father!”

The question was repeated once or twice more, and then the Conservative candidate finally conceded, “we took it from the Natives.”

“Well, we want to do the opposite,” replied Gaitán. “We want to give the land back to the Natives.”

This story reveals the similarities between Gaitán’s politics and that of Castro, for example, who expropriated his own family’s land after the Cuban Revolution. One is also reminded of other progressive Latin American leaders such as Jacobo Árbenz, Lázaro Cárdenas, or more recently Allende, Ortega, Chávez, or Morales, who spoke to the needs of the poor and indigenous peoples of their countries.

What is the evidence that, as the erudite Chávez claims, the US had Gaitán killed? His alleged murderer, Juan Roa Sierra, was eviscerated by an enraged mob on the spot immediately after the killing.

Coincidentally, the US Secretary of State, George Marshall, was in Bogotá for the Pan-American Conference at the time. After the murder the enraged mob descended on the conference headquarters and incinerated it.

Government buildings were attacked, including the headquarters of the Pan-American Conference | Photo: Bogotá archive

In the years since, the suspicions of the Colombian people have been corroborated. In 1960 Cuban sources taped an interrogation of John Mepples Espirito, a CIA agent captured in Cuba during the 1960s. Espirito said that he traveled to Colombia as part of a team of agents who used Colombian Juan Roa Sierra to assassinate Gaitán on April 9, 1948.

A 1964 book, The Invisible Government, written by two former CIA agents, corroborated these claims. The CIA — which never confirms the identify of its agents in any case — disowned the two authors.

Gaitán’s daughter, a diplomat herself, unequivocally believes the CIA killed her father. See the short video below for her comments, and some amazing footage of the destruction of Bogotá following the murder.

The killing of Gaitán would be entirely consistent with the CIA’s well-documented practices over 70 years since. Back in 1953 Mossadegh was ousted by the CIA in Iran — a matter of public record, detailed once again in the recent film Coup 53. In 1954 Árbenz was removed by a CIA coup in Guatemala (public records indicate the CIA Operation PBSuccess was authorized by Eisenhower in August 1953). One starts to sound like a broken record recounting all the CIA overthrows of democratically elected progressive leaders so let’s leave it at that for the time being.

Myriad possibilities for Colombia’s development open up in our imagination when we consider all the life that has been taken from the region’s left-wing and progressive movements. The same exercise, of course, can be repeated for our global community. The assassination of Jorge Eliécer Gaitán was a tragic milestone in this enduring process.