The recent upsurge in state and right-wing violence has left all of Colombia reeling, but Indigenous communities have been particularly affected by it. This is evident from recent data published in a report by the Human Rights Observatory of the National Indigenous Organization of Colombia (ONIC). The report revealed that between January 1st and March 9th of this year, a span of little more than two months, over 3674 Indigenous people in Colombia registered human rights violations.

An ONIC press release summarized the harsh realities of the conditions Indigenous people face in the country; “The displacement caused by the armed conflict in Colombia has claimed the lives of thousands of our Indigenous brothers and sisters that have been killed or have fallen in the crossfire. They are losing their territory, suffering hunger and sickness. Today in Colombia there are entire pueblos and Indigenous communities on the verge of physical extermination.”

According to data from the latest National Population and Housing Census, conducted in 2018 by the National Administrative Department of Statistics (DANE), there are 115 Indigenous pueblos (villages) in the country, and all have had registered infractions against their legal rights.

Since the signing of the Peace Accords in 2016, the two most significant violations experienced by Indigenous communities have been confinement and mass forced displacement, accounting for 51.6% and 30% of cases reported, respectively. Of the over 3,000 individual cases filed in the early months of this year, ONIC reports that 2,960 are due to confinement, and 677 to forced displacement. 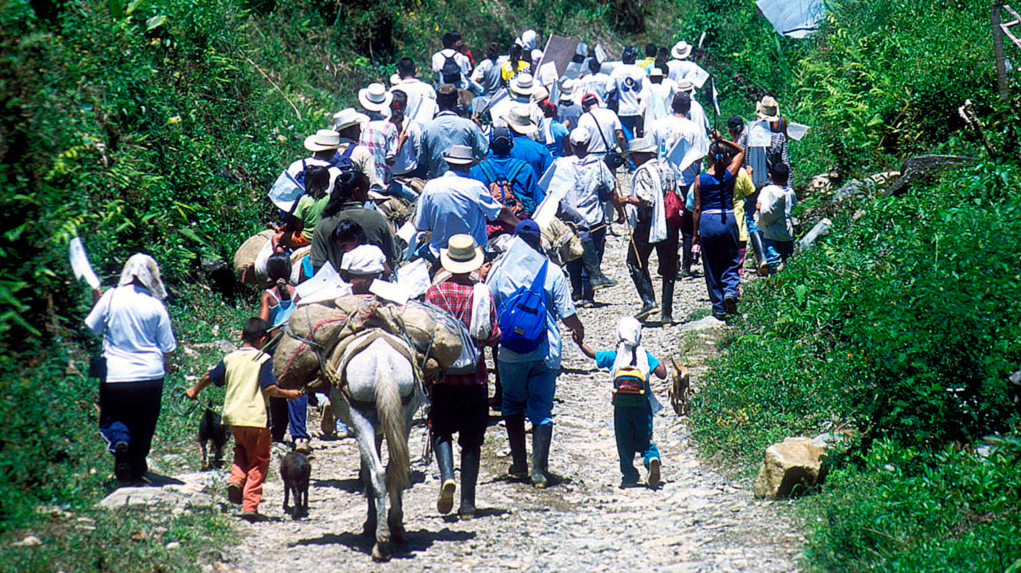 Another factor impacting Indigenous communities is the presence of various armed groups in the region, many of which are vying with each other for control. Included in this lot are a number of narco-paramilitary groups such as “Los Caparros”. In addition to extra-legal forces, ONIC has come out to denounce the presence of Colombia’s Public Forces, stating that Indigenous communities continue to suffer violence at their hands.

ONIC also makes clear the role of business in the continued violence against Indigenous communities; “We affirm that we are direct victims of permanent human rights violations and infractions of International Humanitarian Law… and we know that behind this painful and tragic reality is the interest of the big businesses in our territories for drug trafficking, mineral and energy extraction, and agro-industry.”

One of the most critical situations highlighted by ONIC was that of the Emberá people, who, since 2001, have had to relocate after being forcibly removed from their land. Today, there are 393 displaced individuals living in Bolivar City, a neighborhood in the Colombian capital of Bogotá. There they are classified as living in high risk and vulnerability, having no guarantees of attention to their health, education, nor housing. Ultimately, without any clear routes to return to their homeland, they face the imminent risk of physical, cultural, and territorial termination.

ONIC affirmed that this type of situation is not new nor unique, and will only continue as long as the Colombian state refuses to guarantee the rights of Indigenous peoples in their territories; a decision that has only led to, and will only lead to, continued violence against Indigenous populations. Additionally, ONIC noted that the socio-economic disparities present in the country have only been aggravated due to the conditions caused by the COVID-19 pandemic.

ONIC calls for the support of civilians and governmental bodies in putting an end to the continued violation of Indigenous rights. They request that new peace agreements be made with subversive groups in the region and that all parties comply with the existing accords to ensure the safety of Indigenous peoples and Colombians across the country.\

The report concludes with a call to respect the agreements made during the last peace accords;

“We insist on the compliance of the agreements made between the ex-guerrillas of the FARC-EP and the Colombian state, and specifically on the implementation of the ‘Ethnic Chapter’ as a way out of this grave situation. Equally so, we cry out for the restart of peace talks with the ELN and other armed groups in order to end this war that is leaving a trail of pain in the land.”