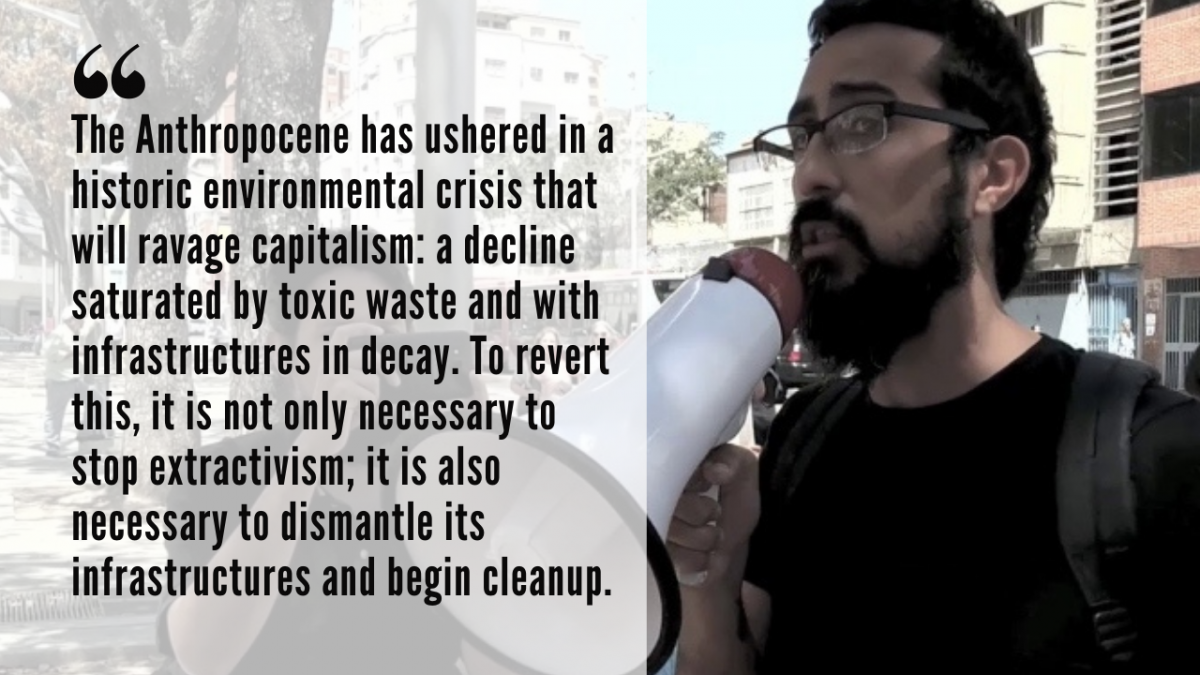 [Read Part I of the interview here.]

In 2016 the Venezuelan government promoted Decree 2248. The legislation opens an Amazonian territory larger than Portugal to mining. However, beyond that decree, there have been other changes in legislation that are relevant to the environment. What can you tell us about these new decrees and laws?

Buitrago: Let’s talk a bit more about Decree 2248, since it marks a turning point. It is a declaration meant to expand the frontiers of mining, and it has a huge environmental and social impact.

First, as a presidential decree, it was not debated in the National Assembly. In fact, there was no public conversation around a decision that will have a huge impact on generations to come. It is ironic that in the very same Gaceta 40.855 [the Gaceta is an official publication including new legislation and official announcements] where the Decree 2248 was published, the new Seed Law was also published. This was a law banning genetically modified organisms and private patents on seeds, that passed as a result of a grassroots struggle.

Thus, this Gaceta contained two antagonistic models – one that fosters the commons and commits to life and another one that violently displaces people and deprives them. Today, five years later, what prevails is an unsustainable extractivist model of development, while the Seed Law gathers dust.

The discourse around the Mining Arc decree is very contradictory. It promotes the idea of “ecological mining,” thus ignoring our continent’s history of environmental and social devastation. In fact, Venezuela now has a Popular Power Ministry for “Ecological Mining”!

Decree 2248 proposes to regularize mining. Indeed, most of the gold mining is informal and illegal. So the decree may sound like a good idea. However, in addition to legitimating the mining practices, the “regularization” of mining is inevitably a very violent process. On the one hand, there are mafias in the region engaged in illegal mining, and they are willing to defend their turf with firepower. On the other hand, the expansion of the mining frontiers comes with the displacement of indigenous communities and the eradication of alternative economic forms of life.

In the collective imaginary, the Mining Arc is a consolidated project. What there is, in fact, is a process of visible exploitation, while displacements of people and violent confrontations are underway. The Mining Arc is really a project in process.

There was a Foreign Investment Law promoted by the National Constituent Assembly in late December 2017. The law seeks to attract foreign investment by exonerating non-Venezuelan capitalists from paying taxes. It states that if there is any existing legislation regulating foreign investment in any particular sector, the Foreign Investment Law will override it. This, of course, is particularly relevant when it comes to mining and extraction of hydrocarbons.

Also important is the 2019-2025 Mining Plan, which further opens the national territory to mining and gives each state governor direct control of an Orinoco Arc mine. This is a rather odd and blurry arrangement.

Finally, the 2020 Anti-Blockade Law gives legal backing to opaque activities as a way of circumventing the blockade. However, this presents a multifold problem: it encourages all kinds of shady transactions, since nobody has to render accounts to anybody [neither foreign capital nor the state has to do so] for anything, as long as the sanctions are in place.

Obviously, the Orinoco Mining Arc will have a huge impact on the environment, but what about its impact on indigenous communities?

Buitrago: One of the immediate consequences of large-scale mining is the reduction of tourism, which was an important source of income for indigenous peoples here. Further, mining reorganizes economic activity, and agriculture is disappearing in the region. Of course, with the expansion of the mining frontiers, the disappearance of tourism, and the pandemic, the indigenous communities have two options: change or die.

There is now a split in the Indigenous Council [a confederation of indigenous peoples in Bolívar state]: some denounce mining in the region, while others remain silent. All this happens in a highly polarized context.

As I said earlier, the Mining Arc is a very violent region. In addition to the Sindicato’s [ad hoc local government, see Part I] diffuse governance, other actors such as the AUC [Colombian paramilitary group] and other irregular groups have mining interests there.

In fact, the control of gold veins always requires armed protection, either by regular armed forces or irregular groups. As you can imagine, it is common that when a new gold vein is discovered, indigenous communities get displaced.

I would like us to look at this map together: it is the intersection of the Orinoco Mining Arc polygon with nature preserves and indigenous territories.

In Part I of the interview, you talked about the high incidence of malaria in mining areas. What about the overall public health situation in the Mining Arc?

Buitrago: Malaria is indeed the most visible problem. In tropical regions it spreads exponentially with deforestation, alluvial mining in river basins, and other mining-related processes. Some studies indicate that between 2009 and 2019 the number of people infected has increased tenfold. The Tropical Medicine Institute [part of Venezuela’s Central University] reported 467 thousand cases in 2019 alone.

There is clearly an epidemiological outbreak. Meanwhile, the public healthcare system in Venezuela has been deinstitutionalized: it doesn’t have resources or supplies, and a lot of medical personnel have resigned due to the low wages. Hence, while there are better and better conditions for the spread of the malaria vector, the system doesn’t offer the necessary attention and medication.

Some humanitarian organizations are tending to part of the population, but they are not able to keep up with the numbers that are infected.

Another troubling issue is that mining has a devastating impact on water quality. Indigenous populations report that water sources are being contaminated with mercury. There is nothing surprising about this since mercury is regularly used to extract gold.

Finally, the reorganization of the territory also has negative effects on women. Exposure to certain chemicals increases the incidence of miscarriages and infertility. Chemical exposure also increases suicide rates. Additionally, there is more prostitution, which goes hand in hand with an increase in venereal diseases.

The Orinoco Mining Arc is not the only environmental problem here. The deterioration of the oil infrastructure also has a severe environmental impact. What can you tell us about this situation?

Terán: This is something that is very striking: the oil industry does not only impact the environment while it is active. As it turns out, its inactivity is also environmentally damaging. For example, the lack of oil tank maintenance can lead to oil spills and gas leaks that are dangerous for both the population and the environment. One such accident of major proportions happened in Amuay in 2012. Nowadays, oil spills into the ocean are common [e.g. El Palito Refinery dumped some 25,000 barrels into the ocean in July 2020].

There are no public records about spills and other accidents, but it is obvious that poor maintenance has led to a very dramatic increase in accidents. On top of that, the state has no capacity to address these crises.

On a global scale, the Anthropocene has ushered in a historic environmental crisis that will ravage capitalism: a decline saturated with toxic waste and infrastructures in decay. To revert this, it is not only necessary to stop extractivism; it is also necessary to dismantle its infrastructures and begin cleanup.

The Political Ecology Observatory monitors conflicts linked to the environmental crisis. Is there any popular mobilization to defend the environment?

Terán: Yes, there are popular mobilizations against the environmental depredation and the logic of dispossession. They range from conventional resistance to nature’s devastation, on the one hand, to communities struggling for access to water, severely restricted in recent years, on the other.

The Orinoco Mining Arc is a mosaic of struggles and resistances in process. Indigenous communities – particularly the Guahito, Yekuana, and Pemón nations – are arming and organizing themselves in self-defense groups to take control of mines in their territory. They are taking them from irregular miners or the military. These are partial victories: the organized communities take back the territory, but mining continues.

Last year, during the pandemic, a coalition of indigenous and creole people organized in Maripa, a town on the Bajo Caura River. They protested because mining – particularly the use of gold-extracting dredges – is impacting the fishing activities in the area. The struggle went on for a while, and at the end of last year mining came to a halt. This was a popular victory, not only because the protest stopped the mining, but also because the government had to retract a resolution allowing dredge mining.

The conflict map shows that mining is a nationwide problem. The 2019-2025 National Mining Plan expanded the mining frontiers to cover the entire national territory. Some important conflicts underway are in Cerro La Vieja and Cerro La Fumarola [both Lara state] as well as the ongoing conflict in Bailadores [Mérida state].

People are also resisting the growth of high-end tourism. A case in point is Los Roques, a tiny archipelago where the construction of luxury housing developments is underway. Los Roques is a very vulnerable ecosystem, and this kind of exploitation is particularly harmful there. That is why locals are mobilizing.

Finally, when we talk about conflicts, we must also highlight that both campesinos’ struggles to claim land, on the one hand, and agribusiness trying to displace peasants, on the other, are common. The introduction of agroindustrial practices also has social and environmental consequences. The expansion of agribusiness faces resistance from campesinos.

The expansion of extractivism – which is not unique to Venezuela but has accelerated here due to the crisis and the sanctions – is always accompanied by the shrinking of the commons and of democracy.

Terán: In Latin America, the expansion of extractivism must be understood as a historical process that is essential for capital’s reproduction and expansion. It is a violent process, typical of colonial capitalism, and it breaks the relationship between ecosystems and peoples. The advance of extractivism destroys existing social fabrics and metabolic relations. That is why it is important to interpret what is happening in Venezuela from a continental and global perspective.

Unlike mining in the past, its expansion today occurs at a time when the very reproduction of life on the planet is on the edge. In other words, the system is facing a structural crisis that has to do with the material limits of capital’s reproduction.

In Latin America, following the end of the so-called progressive cycle, we entered a process of neoliberalization. With it, the advance of extractivism is even more violent. Regimes of legal exceptionality become more common while democracy is curtailed.

In Venezuela, we are now seeing enclave economies expand. It is part of a continental trend. The process comes, on its global scale, with the commodification and financialization of life itself, as evidenced by the trading of water futures and big pharma’s patenting of genomes.

The Juán Vicente Gómez dictatorship [1908-35], which saw the beginning of oil exploitation in Venezuela, opened a cycle of accumulation by dispossession. This was a very violent and contradictory process, since it brought both modernization and feudal dynamics. One hundred years later, we could be living a reedition of the Gomecista period in a new cycle of accumulation.

Everything points to how we are experiencing a “mutant” neoliberal reform today, which is opening the way to a new formula of extractivist governance. However, it is important to struggle and resist. Social pressure can help us recover popular and democratic objectives. Resistance such that which took place in Maripa is proof of this.