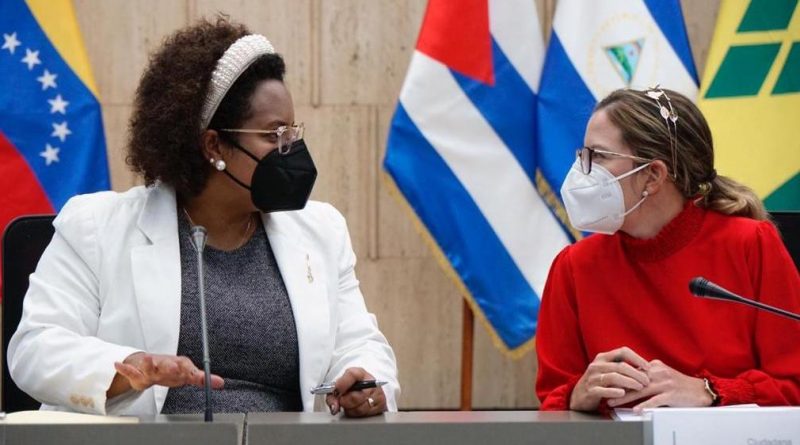 High-ranking authorities related to Women and Gender Issues of ALBA-TCP states met on Wednesday to assess progress and challenges in the construction of a fairer, more egalitarian society without exclusion.

The meeting included the participation and interventions of high-level authorities and representatives of Nicaragua, Bolivia, Granada, Antigua and Barbuda, Dominica, Venezuela and Cuba.

Secretary General Sacha LLorenti opened the meeting with a tribute to Cuban revolutionary Vilma Espín as the meeting coincides with her birthday.

Dominica’s Minister of Gender Affairs Adis King echoed the sentiment, saying “Today is a great day in remembering Vilma Espín of the oriental side of Cuba who has played such a great role in the advancement of the fight of women against injustice. I especially remember her for fighting for the students of the universities in Cuba during the time I studied her. So we just want to remember her today as we celebrate her birthday. She’s no longer with us, unfortunately she died the very same year I graduated as a medical doctor from Cuba in 2007 and I remember it was a very sad time for us, but today I remember her and I think her spirit will be with us forever.”

Minister King highlighted the issue of climate change, with Dominica’s Prime Minister Roosevelt Skerrit having set the goal of making his country the first climate resilient country, as he stated before the United Nations. A program in Dominica seeks to involve women and children in education on the matter, as a means to prepare the nation to confront the problem, in the context of devastating storms in recent years.

Nicaragua, with leading figures for the region in terms of gender parity in politics, shared the achievements and advances of the Sandinista Revolution. Women can be seen heading the majority of government ministries and represent 48.4% of the country’s National Assembly and 59.7% of the judiciary.

Saint Vincent and the Grenadines emphasized the need to provide assistance and resources to young women interested in participating in politics, in order to ensure more balanced gender equity in government. Saint Kitts and Nevis stated that women in her country are leading the government’s COVID-19 response from the Health Ministry and state task forces.

Venezuela’s Minister of People’s Power for Women and Gender Equality, Carolys Pérez, urged revitalization of the women’s committee of the regional bloc and reiterated Venezuela’s condemnation of the unilateral coercive measures imposed by the United States on her country, Cuba and other peoples. The result of these criminal blockades is the hindering of access of millions of women and girls to basic health services, medicine, food, and technology, among other things.

The Minister said that the crises faced by the region are compounded by the HIV/AIDS pandemic and also by the political decisions taken from the neoliberal and capitalist logic that have affected women, adolescents and girls, especially impacting health and education.

She emphasized the importance of revitalizing the ALBA-TCP Women’s Committee, “to become a space that makes visible the rights and empowerment of women and highlights their leading role in our peoples, as well as contributing to the mainstreaming of gender in the proposals and actions generated from this regional alliance.”

Minister of the Presidency of Bolivia, María Nela Prada, took to the forum to denounce the setback in the struggle for women’s rights and depatriarchalization as a result of the violence employed against Bolivian women by the Jeanine Añez coup regime. The coup administration not only committed massacres and murders, it also persecuted social and political leaders, sending former officials into exile, and the violated human rights of indigenous and working class women.

Substantial advances have been entrenched in the Bolivian Constitution in recent years, beginning under the administration of Evo Morales, and the current administration hit the ground running in the fight to strengthen the Plurinational State’s laws to promote depatriarchalization and decolonization.

Prada says the government of Luis Arce is now taking on women’s issues head-on, in order to guarantee a dignified life, free of violence: “We are retaking our path of our anti-capitalist, anti-colonial, and anti-patriarchy struggle.”

The final statement of the meeting on Women and Gender issues is expected to be published on Thursday.