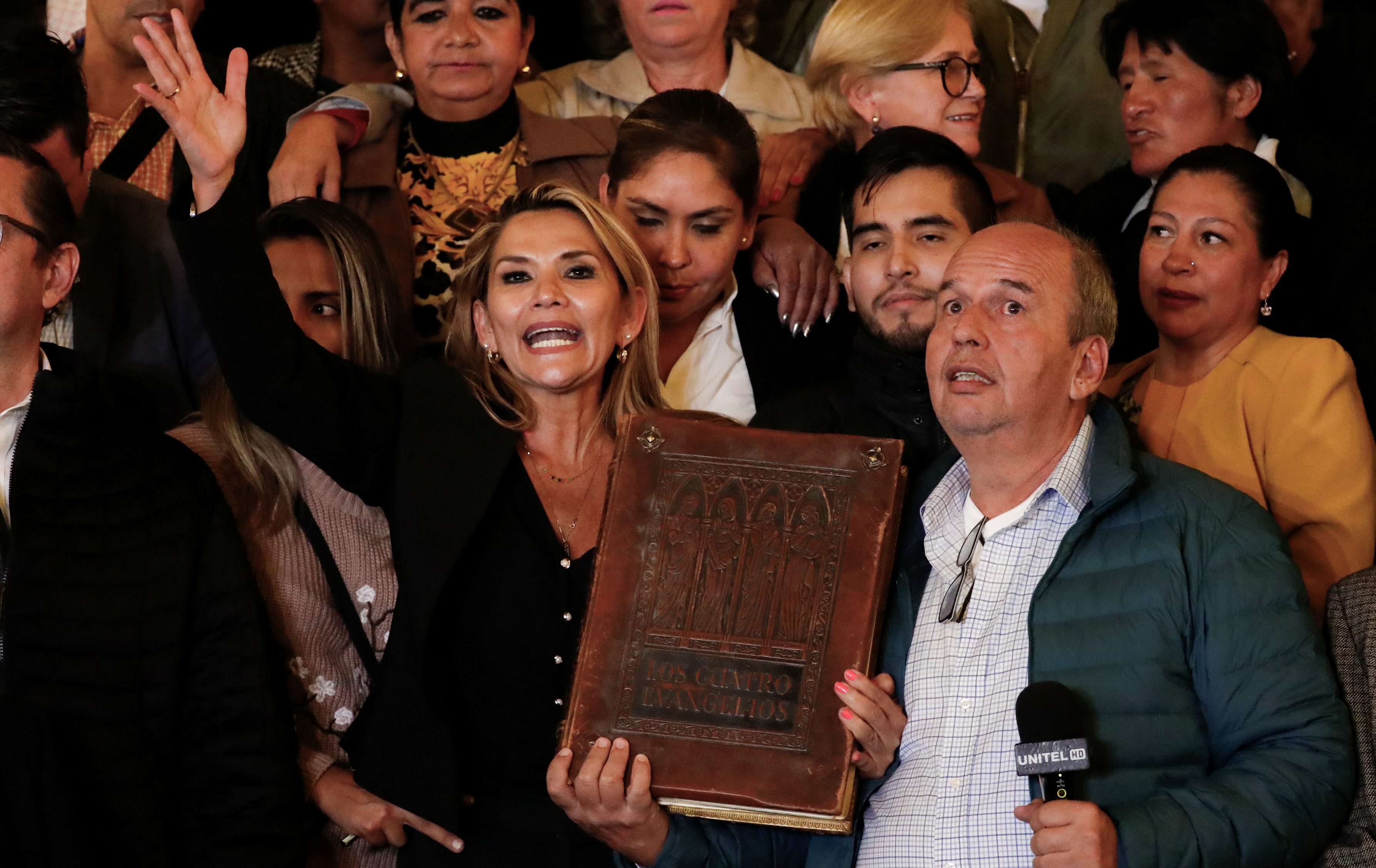 Contempt for the “formalisms” of democracy, the dignity of life, tolerance and respect for the will of the social majorities, is typical of ideological fanaticism, political racism and fascism. But, the question still remains as to why a hierarchy of such an important religious institution endorsed a brutal violation of democracy and the constitution of majorities, when many of its parish priests, who share the pain of the parishioner, have fought for democracy and equality.

“Ipso facto, saving formalisms”. Those are the words that were used on November 12, 2019 to consummate the coup d’état against Evo Morales. So confessed Monsignor Ricardo Centellas, on behalf of the Bolivian Episcopal Conference, in a communiqué read on Friday, March 19. The phrase is simple and brutal when it comes to understanding why a second vice-president of the Senate, representative of a minority political force in Bolivia, with a long record of racist positions against the majority indigenous population of the country, was invested with the presidential sash in a dark room of the Palacio Quemado -the old government palace that had fallen into disuse in 2018-, and from the hand of a general in combat uniform.

It is not just another “formalism” with which to wipe one’s nose as the Catholic hierarchy does, unless it is actually a violent conspiracy against the democratic order of the country. Of course, the logic of the Constituent Assembly of 2008, when drafting this norm, was that the command of the country, in any eventuality, should always fall on authorities carrying the majority vote of the electors. The article imperatively prevents the perverted political management of previous decades, when political minorities, through compromises between the forces that had lost the election, nevertheless came to govern: thus Jaime Paz Zamora, candidate of the Revolutionary Left Movement (MIR), who had come third in the 1989 elections, became president thanks to the support in Congress of former dictator Hugo Banzer (1971-1978). According to the new CEP, the political organization that obtains the majority of electoral support will be directly responsible for the Presidency and Vice-Presidency of the State; the organization that has the largest number of senators elected by department will be responsible for the presidency of the Senate, and the organization that obtains the largest number of deputies by uninominal and plurinominal constituency will be responsible for the presidency of the Chamber of Deputies. And when the constitutional succession has to proceed, the democratic command will always fall obligatorily on the political force with the highest number of votes and representatives in one of the three levels of the state hierarchy. Hence, to “save” this “formalism” was simply to assassinate democracy.

This logic of the normative order that guarantees the democratic government of the country to the majorities through their elected national and territorial representatives, continues in the Regulations of the Chamber of Senators, Article 35 of which establishes that the Presidency of the Senate and the first Vice-Presidency correspond to the majority block, that is to say to those who obtained the highest number of senators in the country; the second Vice-Presidency, the place occupied by Jeanine Áñez, to the minority block. Within the framework of the Constitution and democracy, it was metaphysically impossible that the second vice-president of the Senate, the place of the minorities, could occupy the place of the majorities, that is, the presidency of the Senate. Unless, of course, the sword and the bible are involved in order to “save formalities”, that is to say, to carry out a coup d’état.

As if this integral nature of the hierarchical order of the State based on the logic of majority rule were not enough, Article 75 of the aforementioned Regulations states that, in order to call a session of the Chamber of Senators, the quorum required to convene the session is an absolute majority of its members, i.e. 19 senators out of a total of 36. The opposition parties had only 11 senators – 9 from the Social Democratic Movement (UD) and 2 from the Christian Democratic Party (PDC) – so no matter how many invocations were made to heaven, it was impossible to convert 11 senators into the 19 needed for the chamber to meet. And if it was in session with the quorum, the only democratic and constitutional route was to elect a new president of the Senate from the majority bloc, in this case from the Movimiento al Socialismo (MAS), which had 25 senators, so that he or she could then immediately assume the Presidency of the State. But this meant throwing overboard the financing of paramilitaries who burned departmental Electoral Bodies, forgetting the juicy corporate bribes to the commanders of the Armed Forces and the Police, disregarding the immoral prayers in front of the doors of the barracks and choking on the stories of fraud with which the opponents, after the fall in the polls in January 2019, had covered up their insurmountable condition of defeated minorities.

“But why so much Constitution, democracy, laws and logic of majorities”, exclaimed one of the “Catholic” conspirators on that fateful November 12. There were the opposition leaders Samuel Doria Medina, Carlos Mesa, Jorge Quiroga and others. And in the absence of intelligence and democratic conviction, there was plenty of racial hatred and violent revanchism. So “ipso facto, saving formalisms” according to the Monsignor, 11 opposition senators will now be more than 19, and the minorities will be declared, God willing, “majorities”, thanks to the power of arms and emperor’s prayers.

Certainly this “miracle” does not stand the Sumerian test of arithmetical consistency, much less have an atom of democratic or constitutional. But so it happened; on the power of bayonets, Añez, who by popular vote and constitutional rule could only read the correspondence of the House, now entered through the window of the Government Palace to receive a spurious presidential sash and be escorted by a brotherhood of uniformed men disloyal to their institution and to democracy. Those who could never win national elections, were now in government; the eternal defeated by the popular vote, now won behind tanks. The next day, “ipso facto, saving formalities”, hatred and racism ruled to take revenge on some Indians who had dared to be government. In the absence of the Indian president to be lynched, wiphalas were burned in La Paz and Santa Cruz, while in Cochabamba, the grandchildren of the landowners were in charge of expelling cholas from the city. The infamous year began.

It is necessary, however, to be fair; the “ipso facto” method is not an enjundioso invention of Monseñor. Torquemada had already used it in 1485 to get rid of converts and “dangerous” libraries. The economy of political “formalisms” was also practiced with remarkable efficiency by Fray Vicente, Pizarro’s doctrinero, who, according to Waman Puma, in his masterly Nueva corónica y buen gobierno, gave the signal for the Spanish troops, “ipso facto”, to “kill Indians like ants” in Cajamarca, in 1532; and all because supposedly “they were against the Catholic faith”.

“Ipso facto, saving formalisms”, was also the ideology that guided Himmler to establish extermination camps that, with “expeditious” methods and without legal ties, killed more than 12 million Jews and communists during the Second World War.

This contempt for the “formalisms” of democracy, the dignity of life, tolerance and respect for the will of the social majorities, is typical of ideological fanaticism, political racism and fascism. But, the question still remains as to why a hierarchy of such an important religious institution has endorsed a brutal violation of democracy and the logical constitution of majorities, when many of its parish priests, who share the pain of the parishioner, have fought for democracy and equality. And perhaps the answer lies in another Monsignor who was delegated to the Constituent, like the old crusaders of Urban II in the 11th century, to push back the “impious” constituents who wanted to separate the church from the State. The secularity of the State that finally resulted, seemed to them as diabolical an affront as that implemented by Marshal Antonio José de Sucre when he expropriated the goods of the Church. “If for you it is fatherland or death – the Monsignor now pointed out – for us it is Church or death”. And it certainly was. On November 14, “ipso facto, economizing formalisms”, the bible of Fray Vicente entered the palace with its wake of death of Indians and democracy alike.