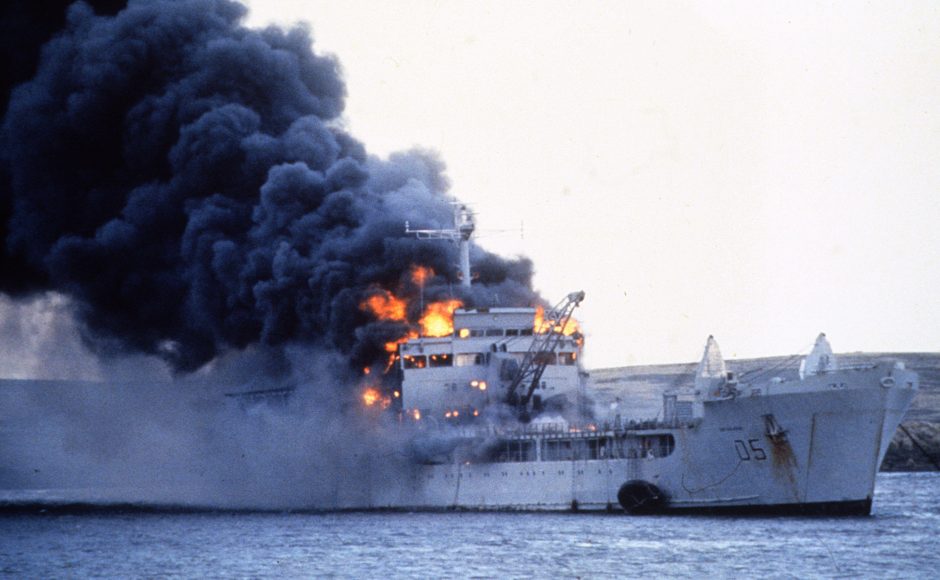 48 soldiers and crew lost their lives when the RFA Sir Galahad was attacked in June 1982 Credit: Rex Features

The further we move away from the event, the more evidence emerges that the war fought between the Argentine Republic and the United Kingdom of Great Britain was provoked by the USA in the geopolitical framework of the East/West conflict, in order to justify the establishment of a NATO military base in the South Atlantic.

The absence of a National Defense Project and its replacement by the National Security Doctrine (not only in our country, but in the whole Region), generated the conditions for the civil-military dictatorships to begin the dismantling of the productive systems, the re-primarization of our economies, the external indebtedness, the dismantling of the national-popular movements and the application of military instruments in internal repressive functions, later characterized as “State Terrorism”.

In this context, the Argentine military commanders “bought” the neutrality of the world hegemonic power in the eventual recovery of our South Atlantic territories, and fell into the trap.

Regarding the second strategic surprise, we will limit ourselves to quote the conclusions of the book “Malvinas, testigo de batallas”, written by analysts of the Spanish Air Force who state that “if all the bombs hit by Argentine planes on British ships had exploded, three quarters of that fleet would have gone to pieces”.

As for the support of the peoples of Our America to the Argentine Cause, the multitudinous flood of volunteers who signed up at the Argentine embassies to fight against the invaders is well known.

In our country, more than 300 thousand men signed up to fight, while thousands of women throughout the country participated in the mobilization and logistical organization. In exile, Argentines persecuted by the dictatorship organized “Committees of Solidarity with Argentina”, without abandoning the demand for the return of democracy and the return of those kidnapped by the Argentine dictatorship. Among them, Ana Jaramillo, who would later become the founder and Rector of the National University of Lanús, was the driving force behind one of these Latin American support committees, which concluded with the famous “Letter of Lima”.

In Argentine prisons, the detainees at the disposal of the National Executive Power, offered to march to the Islands and fight against the colonialists, while the regime that led the armed actions was surprised that the Nicaraguan and Cuban governments offered them weapons and thousands of combatants in the face of the new Anglo-Saxon invasion.

At the end of the armed conflict, a new battle began, this time over the meaning of those events, which continues to the present.

The “de-malvinization” -a neologism coined by the French political scientist Alain Rouquié-, consisted in the reduction of the causes, development and consequences of the conflict to endogenous motivations of the civil-military dictatorship, relegating to a secondary level the historical and geopolitical reasons of the colonialist powers. This reductionist, anecdotal and monocausal version has become the hegemonic vision of the elites of symbolic production in our country, and has been highly functional to the perpetuation of the colonial status quo.

While in Argentina we submerge ourselves in the story repeated ad nauseam about the young age of the soldiers, the hunger and cold suffered, the congenital perversity of professional soldiers to the detriment of their subordinates, or the excess of alcohol ingested by a general, in the “neighborhood” voices emerged that guide us to understand the meaning that our people (and with it, the peoples of Our America), have conferred on the clash of arms against our historical enemies.

The lawyer and political scientist Luis Alberto Moniz Bandeira has contributed several reflections unraveling the impact on Brazil of the armed conflict between the Argentines and the British, the latter with the decisive support of NATO.

In “Argentina, Brazil and the United States: from the Triple Alliance to Mercosur” (2004), Moniz Bandeira describes the enormous wear and tear that it meant for the United States to have supported Great Britain politically and militarily, provoking the total discrediting of the Inter-American Treaty of Reciprocal Assistance (TIAR), the Organization of American States (OAS) and the rest of the inter-American institutions, demonstrating that they only served their interests as great powers in the East-West conflict.

The first to take note of the new strategic scenario were the Brazilian military. Moniz Bandeira says in the aforementioned work:

“Until the Malvinas war, the war hypotheses of the Brazilian Armed Forces General Staff were those of internal or guerrilla wars; regional conflicts, with one or another South American country (Argentina among the main ones); wars in another continent, where Brazil should send contingents, as in the Dominican Republic in 1965; and, finally, the possibility of an attack by communist countries and a generalized conflagration. Since the Malvinas war, the hypothesis of war with the United States became an object of study in the Armed Forces.

For this reason, the Brazilian Armed Forces were persuaded that they had entered the ‘right path’ when they decided to promote their own production of war material, in order not to depend, as much as possible, on external supplies.”

Another neighborhood thinker, Alberto Methol Ferré, said in his historic closing speech at the Seminar “Malvinas and the South American Union” (organized by the UNLa and the Commission of Relatives of the Fallen in Malvinas at the Chancellery, 2005):

“Never in my long life have I seen such an event of such intense solidarity emotion, from Mexico, Peru, Brazil and all the rest of Latin America, as during the liberation of Malvinas by Argentina. Did that stay locked up in those two and a half months of 1982? Not at all, it produced subsequent events of enormous transcendence. In the first place in Brazil, which adopted a position of solidarity with Argentina, having behind it more than a century of tensions over the Paraná and the inland rivers. The Malvinas generated an explosion of solidarity, to the point that Brazil became radically committed to Argentina.

This commotion, plus the foreign debt crisis in Latin America in 1983 -motivated by the increase of interest rates in the USA-, and the almost simultaneous democratic opening in all our countries, led to the beginning of a new stage in Latin American history in 1985, whose main event was the great rapprochement between Brazil and Argentina, through the agreements between Alfonsín and Sarney. An unprecedented event, which came to realize Juan Domingo Perón’s idea of constituting a center of agglutination in South America: the Argentine-Brazilian alliance, plus Chile, which contributed the bio-oceanic dimension (the failed ABC)”.

The integration process that was opened with the Foz do Iguaçu Declaration, to reiterate -a product of the commotion produced by the battle for the Malvinas, according to Methol Ferré-, was deepened in 1991 with the birth of MERCOSUR. A few years later (1996), in the town of Potrero de los Funes, the member countries of the Common Market will include -together with the democratic clause-, the support to the Argentine rights over the Malvinas Islands. This situation was reiterated in most of the regional meetings.

In 2000, for the first time after the wars of Independence, the South American Summit of Nations, convened by President Fernando Enrique Cardoso, was held in Brasilia. That meeting was followed by two more Summits (2002 in Ecuador and 2004, in Peru), and marked the growing break with the organizations under U.S. tutelage.

Then came the constitution of UNASUR and CELAC, spheres where the governments of Latin America began to resemble each other and to express their peoples. And, although we know of the setbacks, of the marches and countermarches in the arduous path of South American Unity, first, and Latin American Unity, later, we affirm its inexorability. Because the peoples will keep in their memory the lessons that the Malvinas epic taught better than the reading of any book. Which is, we will only complete our Independence if we manage to rebuild the Patria Grande (Great Homeland) that our Liberators dreamed of.