On March 26, a commission of European foreign ministers traveled to Libya to support the establishment of “a new government” in that country. This would be an initiative made by the European Union to try to repair the “great mistake” of the invasion of Libya, perpetrated by NATO a decade ago.

The objective would be to try to propose a “consensus government through free elections”. A very complicated scenario in a country devastated by the bombs of the United States and its European allies, which transformed a prosperous nation into a fragmented territory under the control of hundreds of militias and a Libyan National Army, led by General Khalifa Haftar.

Ten years after one of the greatest crimes promoted by the White House and the warmongering elite of the European Union, it is worth reviewing the facts that justified such invasion and try to extract the hard lessons it leaves us.

The fake bombing that justified the war

The destruction of Libya began on March 19, 2011, with the attack of the Rafale fighters of the French Air Force, who bombed Tripoli, capital of the then Great Socialist People’s Libyan Arab Jamahiriya, with the consent of the United Nations Resolution 1973 that authorized NATO to militarily attack and overthrow the government of Muammar Gaddafi.

A team from the Latin American TV channel Telesur, present in Tripoli, refuted the information that made the front pages of the newspapers and the announcements of the most important TV channels in the world about an attack on the civilian population, which gave justification and legality to the invasion.

Shortly afterwards, the Russian government also verified that there had been no military activity in Libyan airspace against the civilian population. However, it was too late, the invasion had been consummated.

The dawn of the Arab Spring

The year 2011 began with large protests in Tunisia and Egypt, where thousands of demonstrators flooded the streets of the main cities of these countries, while the Western press reported that freedom was about to come to the Arab world. This movement was called the Arab Spring and occurred in the countries bordering Libya. Ben Ali, first in Tunisia, and Hosni Mubarak, in Egypt, would be replaced by new leaders equally compliant with Washington’s interests in the region.

Venezuelan journalist Richard Ezequiel Peñalver, an international analyst, noted that both leaders fell after decades in power and that this characteristic, associated with dictatorial regimes, would soon be applied to Libyan leader Gaddafi.

“A kind of pincer was applied to Libya, with examples on both sides of the border. In the case of Egypt and the case of Tunisia, with supposed overthrows of tyrannies leading to democratic movements. Then the protests in Libya started in that wave, with a major campaign in social networks, a very well orchestrated psychological campaign, pro-imperialist campaign,” he said.

On February 17, 2011, protests broke out in Benghazi, dubbed the Day of Rage.

“They captured government and military sectors, Benghazi was used as a beachhead, liberated territory, something they tried to do in Venezuela on several occasions, with the Altamira square in Caracas, in 2002, they succeeded there”, he said.

He also stated that “in the midst of the alleged protests, they managed to land officials from the United States, Europe, and mercenaries began to enter through different places along the border, via Egypt, to the south also through Tunisia, even by sea”.

Peñalver described the bombing of Tripoli by the Libyan military air force, which was never carried out, as a false positive, the climax of the media campaign against Gaddafi prior to the invasion.

“That manipulation campaign worked while it was spread by the media worldwide, tens of thousands of mercenaries entered and the plan for the destruction of Libya began, then the approval in the United Nations opened the door to NATO to bomb Libya, in coordination with the ground mercenary invasion”, he affirmed.

For his part, Spanish analyst José Egido explained that imperialist wars are preceded by a systematic campaign, in his words, of information intoxication to justify the war and deceive public opinion in their countries and the world. “The war against the Libyan revolution was no exception, there was a preparation for war.”

“Now what we have is the destruction of the State, the division of a country, the fragmentation of tribes, the destruction of sovereignty and the takeover of the country by imperialist, foreign, mercenary and terrorist forces, who have turned the country into a market for African slaves, a kingdom of mafias that traffic migrants to Europe and a plundering of the country’s oil resources, in the framework of a war between two foreign-oriented sides. It is the biggest disaster that an African country has had in the last 200 years, at least”, Egido exclaimed.

Peñalver stressed that the destruction of Libya was orchestrated as part of a larger plan.

“Libya should not be seen as an isolated case, that was in the framework of a political modification planning of the Middle East and North Africa, the case of the so-called Arab Spring that started at the end of 2010 in Egypt, then in Tunisia. Tunisia, Egypt, Libya and Syria, practically in unison,” he said.

The invasion of Libya was executed just after the African Union Summit, held on January 31, 2011, where the creation of the African Monetary Fund, a project sponsored by Gaddafi, was approved.

Some analysts point out that unifying Africa with a currency backed by Libyan gold was what cost the Libyan leader his life. Gaddafi’s leadership in Africa was remarkable and his plans to consolidate the continent as a world economic hub were well known. For Peñalver, the new currency was indeed a decisive factor for removing Gaddafi from the world political game.

According to Peñalver, it is important to remember the proposal:

Muammar Gaddafi visited Latin America for the first time when he participated in the second ASA Summit, held in Margarita Island on September 28, 2009, where he met with the host of the event, former President Hugo Chávez.

Egido added the historical reasons that kept Gaddafi and the Libyan Revolution in the spotlight.

“Since September 11, 1969, the Al Fateh revolution followed an anti-imperialist and anti-colonialist line that aimed at building a revolutionary and peaceful Mediterranean Sea, a united Arab, anti-Zionist and anti-imperialist nation, and a united African continent, besides also having helped the revolutionary forces in Latin America. His close friendship with Comandante Chávez was not to the liking of the murderous imperialists either”, he highlighted.

Gaddafi as leader of the Green Revolution managed to unify the provinces that had been divided by centuries of influence of the Ottoman, Roman, Byzantine and Italian empires. Provinces, groups and tribes that were crushed by the invasions of the 19th and 20th centuries sponsored by Europe to keep this rich territory at the service of the Western powers.

With the death of Gaddafi, the unity agreement that gave rise to the Great Libyan Arab Jamahiriya was broken. José Egido emphasized that the strategy of dividing was to defeat an important pole of geopolitical power “The imperialists and their Islamo-fascist and Islamo-terrorist lackeys have contributed to strategically divide the Libyan people so that it would no longer be a revolutionary anti-imperialist pole of unity of the Arab world, of the Muslim world, of the African world, of the world of the revolutionary countries of the third world”, he said.

Gaddafi, captured, tortured and assassinated after the invasion, left a warning and prophecy that Libya would enter into an uncontrollable spiral of violence, as it has been until now. The Spanish analyst explained that in addition to the historical three provinces, tribes and groups, there are the terrorist organizations that traffic in people, natural and energy resources sold to the highest bidder, such as Al Qaeda, the Islamic State, the Muslim Brotherhood, in addition to the intervention of Western powers such as the United States and France and neighboring nations such as Turkey and the United Arab Emirates.

“Qaddafi tried to follow in the footsteps of Nasser, unfortunately his projects of unity with other Arab states such as Morocco, Tunisia, Egypt, did not work, and in the end he became isolated, but there is no doubt that he is one of the great anti-colonialist and anti-imperialist Arab leaders of the twentieth century, as is the Moroccan Muhammad Ibn Abd el Karim El Khattabi, as is the Algerian Houari Boumédiène, as is the Egyptian Gamal Abdel Nasser, as is the founder of the Syrian BAAZ party Michel Aflaq, as is the leader of the Syrian revolution Hafez Asad, as are the Iraqi Arab nationalists”. 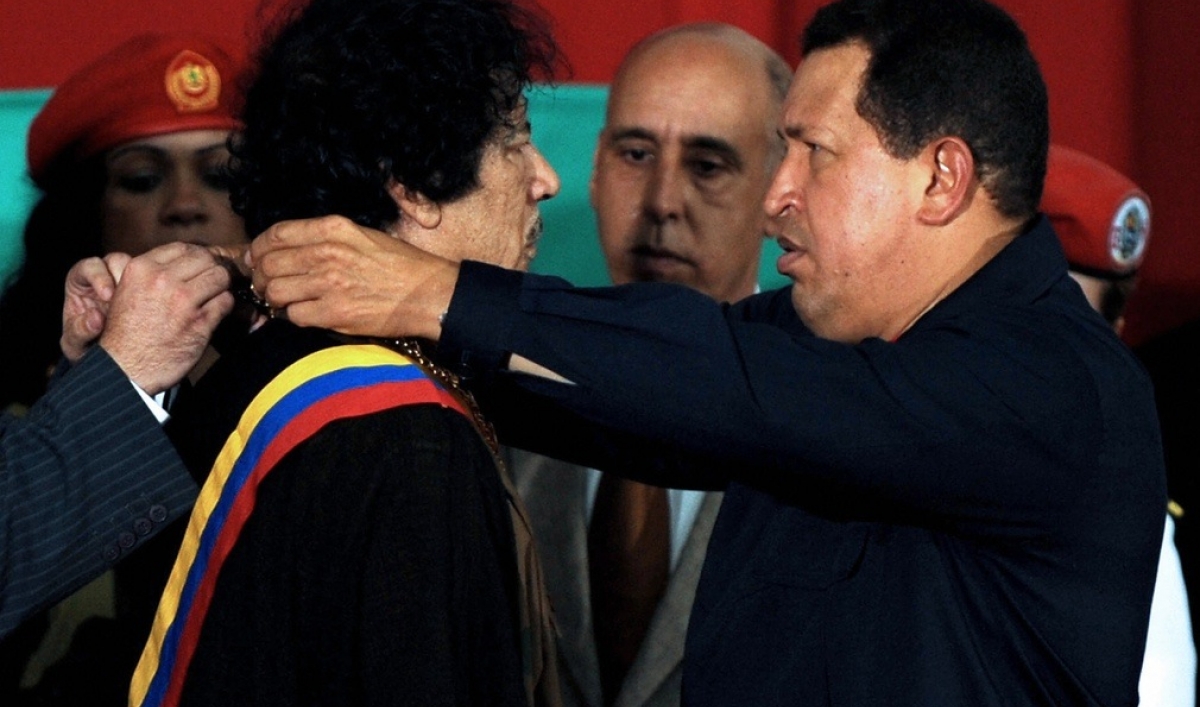 Libya and Venezuela, the same risk?

Venezuelan journalist Richard Ezequiel Peñalver considers that although the confrontation with the interests of Western powers keeps Venezuela, currently encircled by a blockade, at risk of attack, the context is different. “The Libyan case is framed within a project elaborated in advance, the change of the political face in the Middle East. Imperialism does not act in isolation”, he pointed out.

The United States had announced its progressive withdrawal from Iraq in 2011 and finally did so after making military incursions into Libyan territory.

“In the case of Venezuela, we could say that it is framed within a project that was executed in what for me was the death, the assassination, of Commander Hugo Chavez, which I do not think happened by chance after the death of Gaddafi, two leaders who tried to deepen the alliance between Libya and Venezuela, between Africa and South America mainly”, he indicated.

Richard Ezequiel Peñalver emphasized that transnational interests continue to make a dent in Venezuela’s relationship with Colombia and Guyana, just as they tried to do with Libya; nevertheless, the raising of parallel governments to divide the Bolivarian nation has not worked, just as the region gradually turns to the Latin American right.

“After the death of Chavez, we saw how Brazil fell, the coup against Dilma Rousseff, how they managed to control Ecuador for a time, with Moreno’s betrayal of Correa, the coup in Bolivia, Macri’s victory in Argentina, and now we see how, 4 years later, the wave returns, Alberto Fernandez won in Argentina, the coup d’état in Bolivia has been reversed with the victory of Arce and the return of Evo to his country, Lula Da Silva after being convicted of corruption was acquitted, the candidate of the alliance of Correa’s party in Ecuador won in the first round, we see how the situation is changing. So, to think that a plan similar to Libya’s could be executed in Venezuela, I see it as really complicated. Now, we should not rule out that other options are being considered by imperialism in Venezuela”.