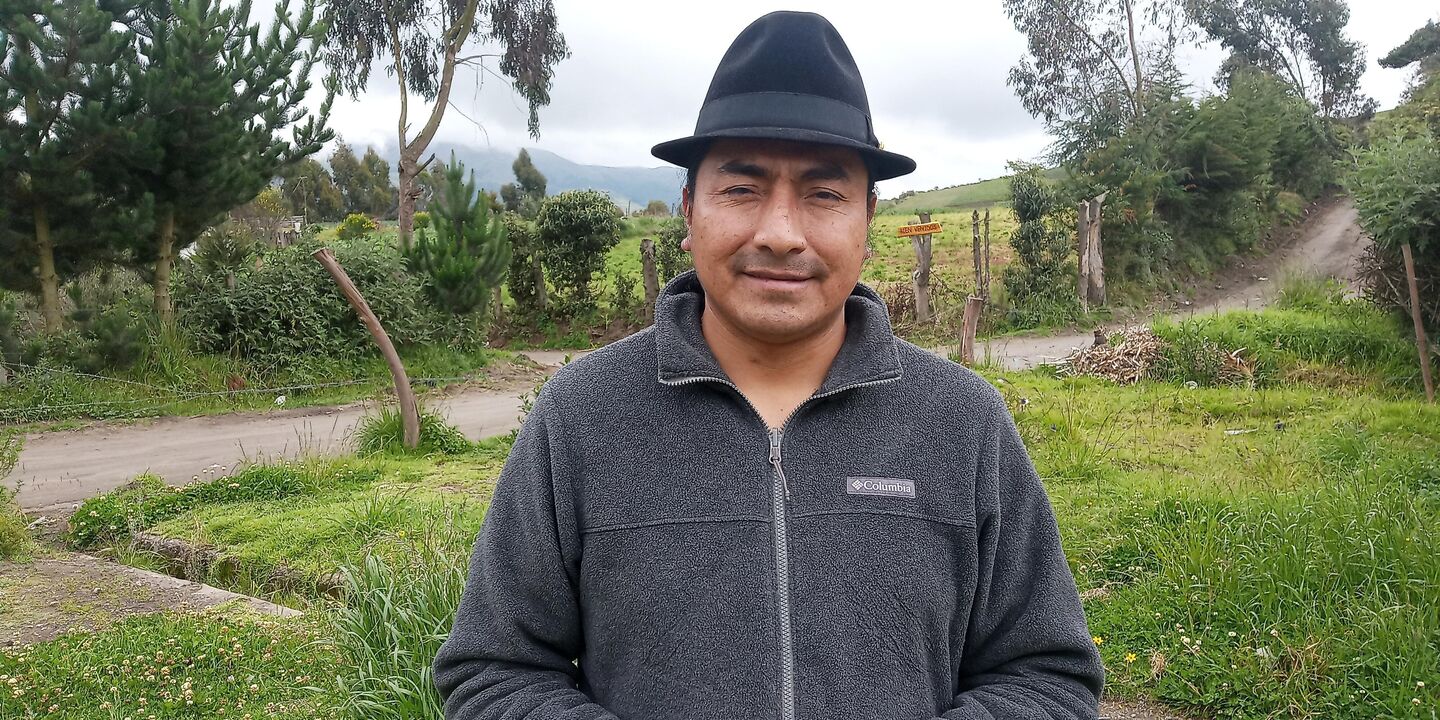 Ecuador’s main indigenous movement is in the midst of debates and tensions over the presidential candidacy of Yaku Perez, the logic of decision-making, and alliances for the second round of elections. Leonidas Iza, one of its main leaders, talked to Sputnik about the current situation.

Leonidas Iza Salazar is one of the main leaders of the indigenous movement in Ecuador. His name gained national prominence in the October 2019 uprising against the attempted economic adjustment sought by the government of Lenin Moreno. Iza was at the head of the Indigenous and Peasant Movement of Cotopaxi (MICC) that mobilized nearly 60,000 people to Quito during those days in October.

Since then he is the subject of eight judicial proceedings. He is not the only one: Jaime Vargas, president of the Confederation of Indigenous Nationalities of Ecuador (CONAIE), of which the MICC is part, has seven processes, and “many comrades in the provinces have precautionary measures, they cannot leave the country, they have to sign-in every week,” explained Iza from San Ignacio, the community where he was born, in the province of Cotopaxi, two hours from the capital.

Iza is once again at the center of the current debates in Conaie, one of the four indigenous organizations in the country, “the most structured”, he says, which comprises 18 peoples, 15 nationalities, with a presence in the three regions of the country: the highlands, the Amazon and the coast. The debate that the movement is going through has repercussions on national politics because it has at its center the question of the presidential elections, in which Yaku Perez was a candidate for the Pachakutik party, the electoral instrument of the Conaie.

Discussions about Perez’s denunciation of fraud in the February 7 elections, as well as what position Conaie will take before the second round, hide deeper tensions, “a very difficult moment”, explains Iza. The internal differences include Pérez’s candidacy, the relationship between Conaie and Pachakutik, decision-making, alliances, and the existence of a sector of the movement with links to the right.

The Pachakutik political party was created in 1995 “by collective decision”, says Iza. Five years earlier there had been the first indigenous uprising led by Conaie. The original agreement was that “those who decide on the life of Pachakutik are the organizational structures of peoples and nationalities at the Conaie level”.

However, this relationship and form of internal decision making began to enter into “dispute”, says the MICC leader, with what he calls an attempt to “autonomize itself on the part of the Pachakutik movement, not wanting to depend on the decisions of the organizational structures”.

The debate is currently divided into two positions. One sector, which includes Iza, maintains that Pachakutik should “sustain itself with the organizational structures”. This is a vision that is raised not only in view of a specific decision, but also towards the exercise of government at any level, national or local, to which a candidate of the party may accede: there, too, one must govern and administer “with the structures of the movement and the structures of self-organization of the citizens, because this is not only about the indigenous movement”.

On the other hand, “the regulations of the code of democracy and the organic structure of Pachakutik say that those who decide are the individual adherents”, explains Iza. According to the MICC leader, this not only implies the danger that “Pachakutik as an instrument will be superimposed over the process of struggle that Conaie has had”, but also that it will lead to individualization in participation, when what is historically defended is “a collective form of participation”.

The nomination of Yaku Pérez

“It has been a very complex year”, says Iza, and the candidacy of Perez as head of Pachakutik for the presidency is an expression of that situation. Originally there were four possible candidates for the presidential election: Jaime Vargas, Perez, Salvador Quishpe, who was elected to the National Assembly (NA), and Iza himself.

The election of the candidate was to be, in the first place, by consensus, “as has been the strategy of the indigenous movement all its life”. In order to reach this consensus, three elements were to be undertaken: “a general evaluation of the polls, to determine the strength of each comrade, an evaluation of the decision of the organizational structures of peoples and nationalities, and a survey of their own”.

In the event that this procedure did not take place, then “the other regulations on the processes of internal democracy should be respected, go to primaries, let the peoples and nationalities vote, let the adherents vote, and whoever is elected, then we all align ourselves with the winner”.

Neither of the two procedures happened for the election of Perez. His designation “was a decision solely and exclusively of the coordinators of the provinces and at the national level of the national executive committee of Pachakutik without taking into account the decision of the organizations,” he explains. And that “provoked a fissure”.

There were attempts to unify again, “because we could not face polarized elections”. However, a synthesis was not achieved, Perez remained as candidate and “generated the distancing of comrade Jaime Vargas, from the organizations”.

Neither left nor right

When on February 12, seven days after the elections, Perez and Guillermo Lasso met at the National Electoral Council (CNE) to address the complaint of fraud filed by Perez, Iza wrote on his Twitter account:

We are vigilant that the meeting between @yakuperezg and @LassoGuillermo is not an agreement with the right.
This would be illegitimate and unconsulted with the grassroots of @CONAIE_Ecuador and Pachakutik. Our fight is against the neoliberal right wing that plundered the country, wherever it comes from.

Iza’s public warning in the meeting between Perez and the neoliberal candidate Lasso, who will be in the second round against Andres Arauz, candidate of the Citizen Revolution, was due to the fact that there is “a sector within the indigenous movement that says we are neither left nor right, but at the time of the elections they prefer to go with candidates of the right”.

This happened, for example, in 2017, when faced with the ballot between Moreno and Lasso, Perez called to support the second. Iza points out that even “there is a sector that is around Perez that has stood twice for Lasso’s party, so logically now they are very close and are not going to carry the agenda of the peoples and nationalities”.

This rapprochement of the movement to a sector of the right is part of the current debates. Iza defends Conaie’s leftist position: “We take that position based on reality, most of our families live in poverty and extreme poverty, and that logically leads to a political project, and the intention is to transform that reality”.

However, politics in Ecuador is marked by a political watershed, which is Correaism and anti-Correaism. This cleavage works as a device to gather heterogeneous alliances against Correaism, namely the Citizen Revolution, under which the Conaie sectors that seek alliances to the right are sheltered. However, this is not the only problem:

“Ecuador is saturated with this idea of correísmo and anticorreísmo, an unnecessary polarization of politics. There is a sector of the right wing that confronts Correaism with all its strength, but our colleagues also confront it because we have been beaten by Correaism”.

Iza refers to several issues they “dealt with” with the governments of Rafael Correa (2007-2017). One of them was “water administration”, where “there we broke relations, we proposed that the community boards be recognized as subjects of production, that the community territories not be divided”.

Another issue was that of indigenous justice: “We had said that it is a right that must be guaranteed between ordinary justice and indigenous justice, a level of coordination, and the criminalization on the part of the justice authorities cannot be allowed”.

Another central issue was the question of territory and mining: “At this moment Ecuador has 15% of the national territory under concession for mining, and 70% of that percentage is in indigenous territories. The nerve center point with all the governments in office is the extractive issue”.

The MICC leader names several other elements, such as the “disrespect to the structures” of the movement, having been accused of being part of the enemy, or criticism of the policies of Correa’s government, in the economic field. “For example, the marketing system, if there is a policy that favors the large chains, why not generate marketing conditions for the same productive units of the peasants, so that they can enter into a redistribution of the economy from the market?”.

Iza acknowledges positive aspects, such as the social assistance policy or the improvement of roads, although in each case with a critical view. To this can be added central issues of agreement, such as the plurinational and intercultural character approved in the 2008 Constitution, or international policies such as the withdrawal of the U.S. military base in Manta, in 2009.

“With all that is there we say we have to continue fighting, but we have to get out of the polarization of correism-anti-correism. In that scenario the only ones who benefit are the right-wing groups”.

“I as a leader do not answer only for my ideas, which have been questioned or debated even with our own comrades who say we are neither left nor right wing and the elections come and they go with the right, and that will never be with me and we are not going to do it”, Iza begins by answering to a question about the second round.

His response comes before Conaie’s Enlarged Council meeting Wednesday, March 10, where this issue will be discussed. “Surely a resolution of an ideological null vote will emerge, without leaving aside the perspectives of the left that must be rebuilt in Ecuador, because we cannot continue polarized and that from that polarization has managed to influence our organizational structures with more right-wing ideas, which is very harmful for the indigenous movement”.

Already the MICC, in its Provincial Assembly of March 5, resolved to promote the “ideological null vote for the second round”, and to take this proposal to the Enlarged Council of the Conaie.

Iza looks critically at the moment: “Many actors of the indigenous movement are not observing with a perspective of international politics, neoliberalism, privatization processes, the conditions of the signing of the Free Trade Agreement, the agreements imposed by the International Monetary Fund. At this moment there is a loophole to review Correa’s policy and this process has not been able to emerge yet, and, consequently, we are going for a null vote”.

The decision that comes out will be abided by, Iza affirms. “If I myself am challenging that the left cannot be divided, no matter how important a spokesperson we have, we cannot break this organizational logic, and this must be understood by every political actor in Ecuador so that in the coming years the political and organizational capacity of the indigenous movement is not underestimated”.