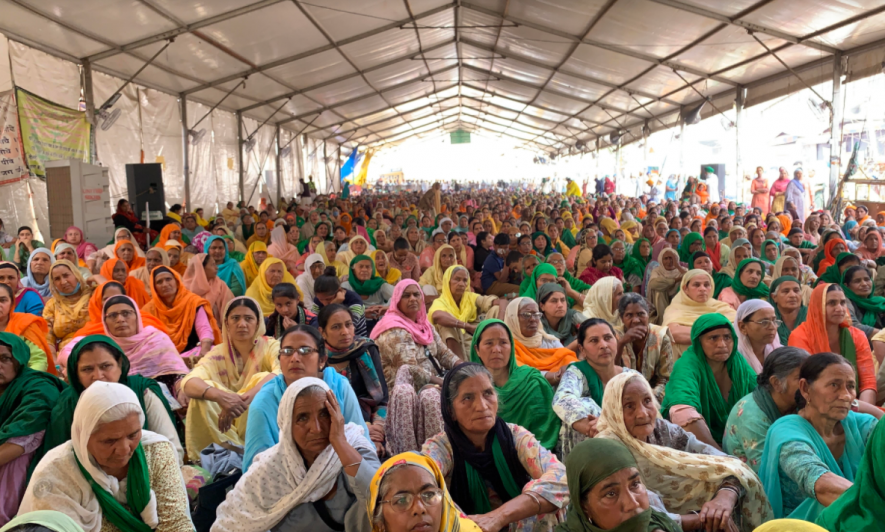 Most women farmers, who had gathered at Tikri and Singhu borders of the national capital, told NewsClick that the farmers’ protest has been a life changing experience for them, as through these protests they became aware about their legitimate rights.

Scarves of all colours and Kisan Ekta flags could be seen fluttering in the sea of women farmers pouring in at the various borders of the national capital to celebrate International Women’s Day on March 8.

The Samyukta Kisan Morcha- a collective of farmers’ unions protesting against farm laws and the proposed Electricity (Amendment ) Bill – had given a call for celebrating the day to honour women farmers and their contribution to the movement at all protest sites at the entry gates of the national capital. Special arrangements could be seen placed to ferry women farmers from remote parts of Haryana and Punjab.

Singing songs in Haryanvi, Sheela Butana, along with a group of 50 women farmers, came from Butana village in Sonepat district to the Singhu border. On being asked about the meaning about their songs, she said the women are cursing the shameless government who has turned deaf even when 300 farmers have lost their lives in the struggle. 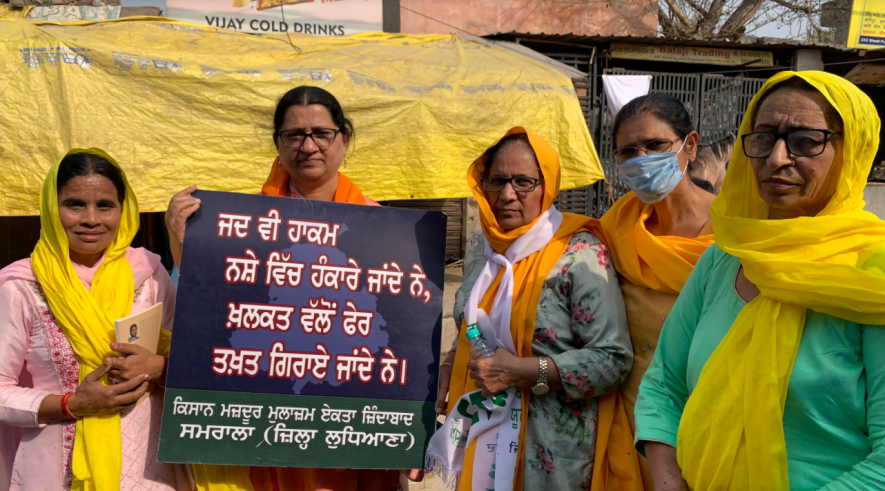 “The song expresses the sorrow of families who lost their sole breadwinners in this struggle. What will happen to their families? We are calling it shameless because no sensitive government would have avoided our demands. This insensitivity, I think, is age old and has now become a part of their thinking. I still have pearl millets rotting at home because the private traders hardly paid Rs 700 per quintal whereas the minimum support price is Rs 2,150 per quintal. The government has fixed the quota of 7.5 quintals per acre arbitrarily. However, the movement has now given us hope that we will fight and finally become victorious,” Butana said.

On being asked if the ongoing movement has given them a sense of equality, she said, “There is no doubt that the movement provided equal opportunities (to women) but the real battle remains to be fought in families and farms where we are still less valued in comparison with men although our hard labour remains same.”

Sunita Rani, an activist of Centre of Indian Trade Unions (CITU) who has been organising anganwadi and industrial workers, told NewsClick that the preparations for the day had begun two weeks ago. “As per my estimates, over 1,200 women workers came with us to participate in the struggle. We campaigned across villages and requested them to be part of the celebration. In return, the women from 25 villages came on tractors and through private vehicles. Interestingly, the men who had objected earlier, too, readily agreed,” she said.

Jagmati Sangwan, All India Democratic Women Association leader, who received a rapturous ovation by the audience, said that the day has given the women participants an opportunity to raise their voice for just rights, which are their “entitlements”. 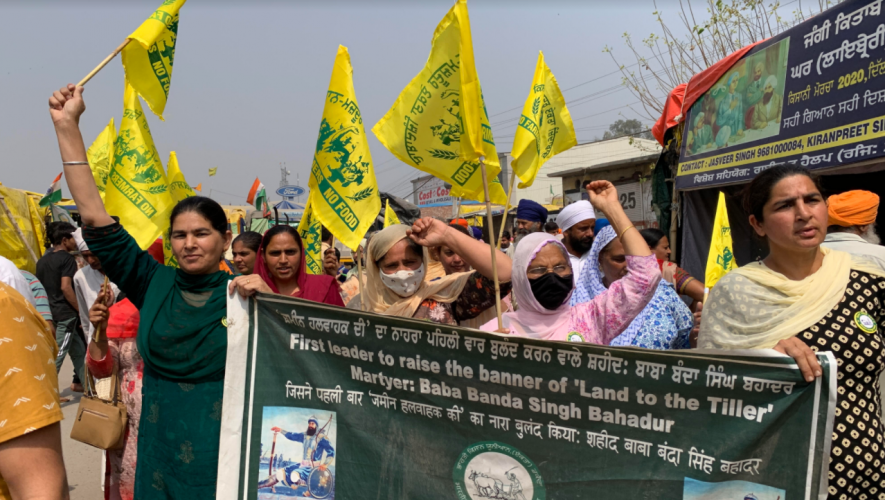 “The fact of the matter is women have only 13% entitlements whereas they contribute 70% to farming. It has simply deprived us from nearly all welfare schemes, be it compensation for damage of crops or any relief if she dies by suicide due to agrarian distress. The situation has compelled us to come up with the term “compound loss” which women are suffering at every front,” she said.

She further added that the Centre led by PM Narendra Modi should keep aside its ego to listen to the government. “If there is any wisdom left in the government, it should call an emergency Parliament session to discuss the agrarian distress. We call agriculture as the backbone of our economy. If the backbone is in pain, the whole body would ache,” Sangwan pointed out.

Commenting on the disparities in salaries of women in comparison with men, she said that the current aim is about establishing the identity of women as farmers and getting their just entitlements, adding, “The movement recognised it. I think other avenues for struggle in other sectors would also open with the success of the current agitation.” 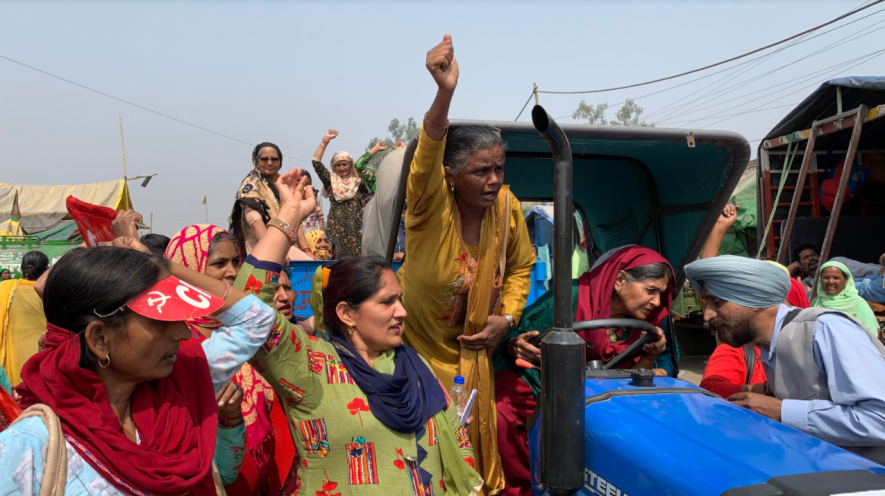 A number of the women farmers who visited the protest site for the first time were also curious to see the border site where the police authorities had fixed nails and put concertina wires to prevent any movement of people and vehicles. One such visitor who came from Samrala in Ludhiana said that it was her special wish to visit the border. She explained the meaning of the Punjabi couplet on the placard she was carrying as, “When rulers lose their wisdom after getting intoxicated with power, people overthrow them.”

Meanwhile, a woman protester speaking from the main stage kept appealing, “My dear sisters, the struggle is not just limited to these farm laws alone. Please reject all Manuwadi theories which have so far limited your identity to child bearing mothers.”

The highlight of the protest site at Tikri border on March 8 was that the stage was managed by the women farmers dotted with women guards and women speakers who had come from different parts of Punjab and Haryana.

While addressing the crowd, women speakers announced their resolve to “struggle for the right to equality in society and strive to fight against oppression and discrimination women have been subjected to”.

Gurmehar Kaur, 50, has spent most of her life in the fields of Punjab’s Barnala district. Having been born in an agricultural family, Kaur used to spend long hours in the fields with her father. For her, the process of sowing, cultivating and tending to the land came handy. “It was a gift given to me by father and I never stopped working in the fields,” she told NewsClick. 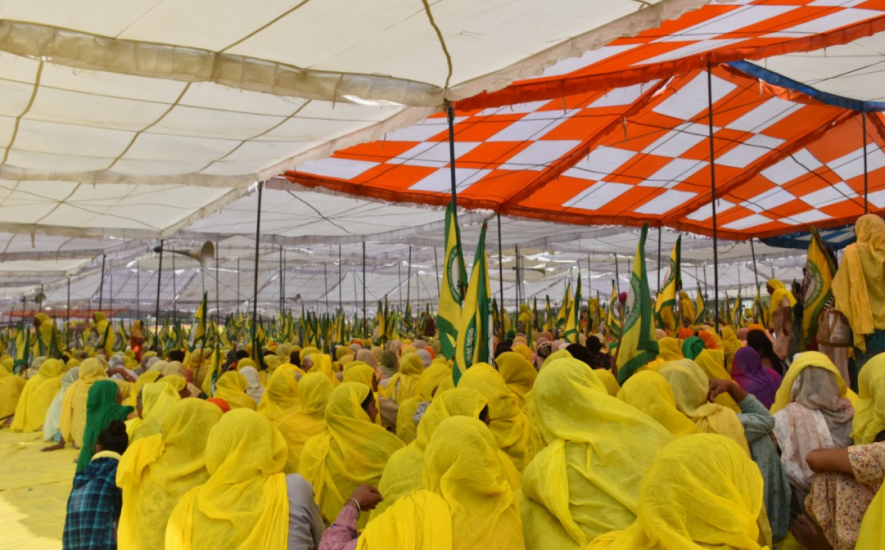 However, Kaur travelled nearly a hundred kilometres to join another thousand women in the outskirts of the national capital, leaving behind her fields. Two months ago, the apex court’s suggestion that the women, elderly farmers and children should return home came as a huge disappointment for her.

“I was shocked. It made me think that the court is oblivious to the fact that women are equal partners. We take care of family and fields, both. So when men are not ask to leave, how can they ask the women to leave?,” she questioned.

Balwinder Kaur, 80, has come all the way from Punjab’s Sangrur district. Walking towards a bunch of young female farmers, she said, whenever someone talks about farming, a male farmer crosses their mind. “But the reality is different. Female farmers have contributed equally and even more than men. Then why female farmers are invisibilised and unheard is my concern. I have come here to shatter that notion,” she added. 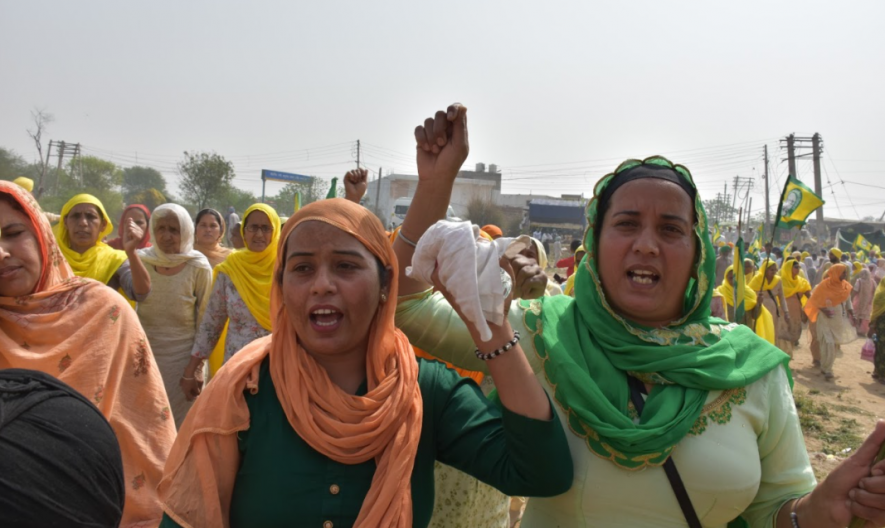 According to Periodic Labour Force Survey (PLFS) 2018-19, released by the National Statistical Office (NSO), in rural areas, 71.1% of female workers are engaged in the agricultural sector, which is much higher than the male workers (53.2%).

BKU leader, Paramjeet Pithoo, who has been at the borders since the protest started, said that years of discrimination has resulted in women being denied ownership of land. “Because of the patriarchal setup and gender discrimination, women didn’t get access to even basic facilities like loans and irrigation. We want this to end,” she added.

As per the India Human Development Survey (2018), 83% of agricultural land in India is inherited by male members of the family.

Most women farmers told NewsClick that the farmers’ protest has been a life changing experience for them as through these protests they became aware about their legitimate rights. 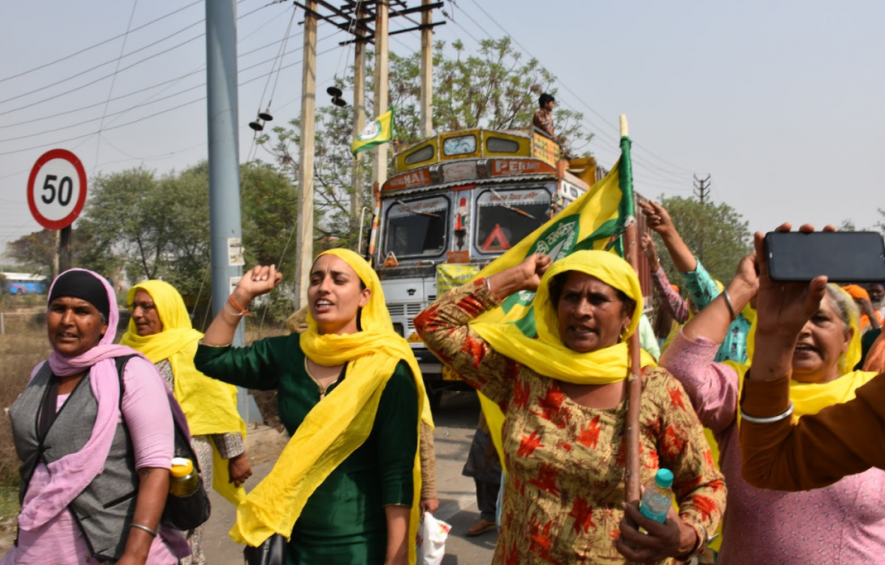 “Aandolan ne hume mehsoos karvaya hai ki hamari izzat hai aur hamare bhi haq hai, jinke baare mei humei phele khabar nahi thi (The movement has made us aware that we should be treated with dignity and we also have rights, about which we did not know earlier),” said Ranjeet, 50, who had come from Patiala to join the protest.

Manju, 41, who had come from Jind, Haryana said that she wasn’t even aware that there is a day exclusively meant for women. “This is my first time. When I learnt that there is something called Women’s Day. I was so elated. I couldn’t keep myself from joining,” adding that she is against farm laws which serve “corporate interests”.

Manju is joined by hundred other women from Haryana – Jind, Rohtak who arrived at the protest site in tractors and trolleys to present their issues. “The world is changing,” Manju said, looking in utter disbelief at nearly one lakh women protesting and added, “Earlier, women could never step out of their homes, but now, they are here fighting for their rights. And once they are united, nobody can stop them.” 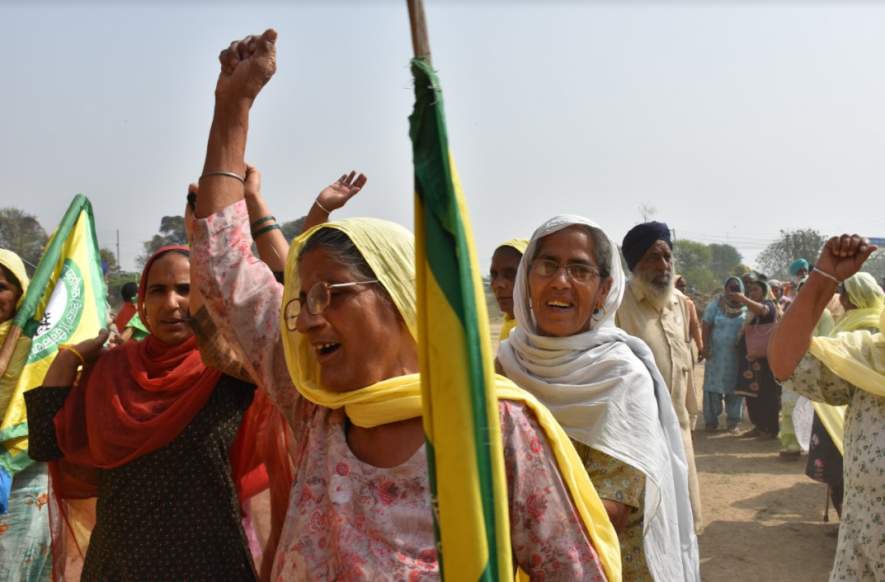 She is joined by her sister Kamlesh, who also appeared awestruck by the sea of women surrounding her. “This is women’s power. It makes me believe that I can do anything. I will make sure that my daughter is educated so that she can speak on the stage like other women,” Kamlesh said, pointing towards the stage where a woman was addressing the crowd and shouting “Mahila Ekta Zindabad (Women’s Unity Long Live)”.