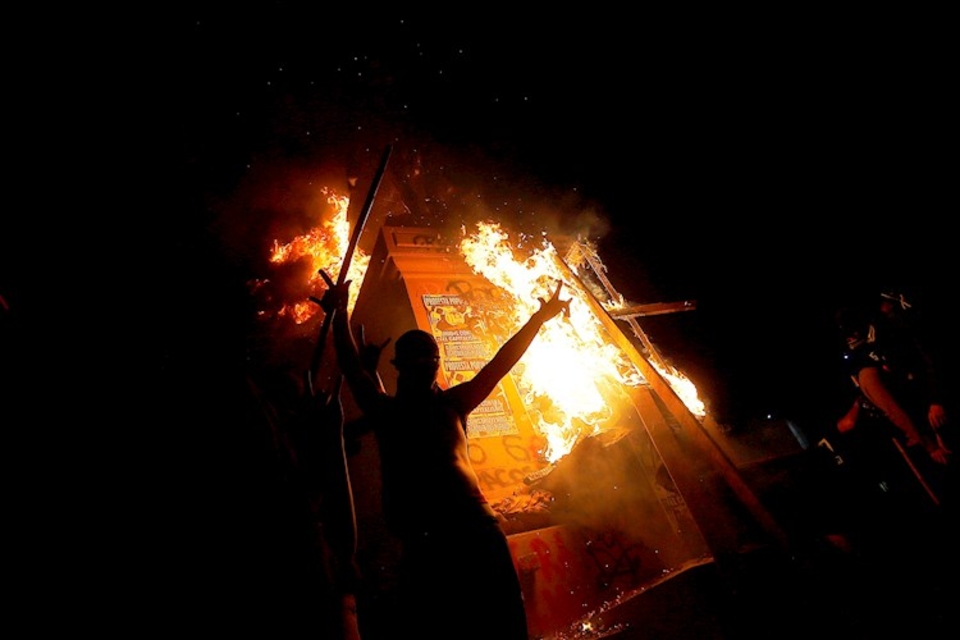 A new protest held in Santiago, Chile last night against the government of Sebastián Piñera and for the release of those arrested in previous marches, ended with 63 protesters arrested, seven Carabineros injured and the historic monument of General Manuel Baquedano in flames.

The Baquedano square in the Chilean capital, known as Plaza Italia, is now renamed Plaza Dignidad by the demonstrators because it was the core of the social outburst initiated at the end of 2019, was the epicenter of a new protest against the conservative government.

During the day, some of the demonstrators set fire to the statue of General Baquedano, in a blaze that was extinguished by the Fire Department after Carabineros forcibly dispersed the demonstrators. Baquedano was the chief of the Chilean troops in the War of the Pacific, against Peru and Bolivia, in which the highland country lost its access to the sea.

Piñera’s government responded with a communiqué in which it described those who set fire to the monument as “cowardly misfits” and “anti-Chileans”. Similarly, the Minister of Defense, Baldo Prokurica, strongly condemned “the affront to the statue of the Army General Manuel Baquedano”. On Twitter he pointed out that “violence and intolerance have no place in a democratic society, and must be condemned and rejected with force”.

Police personnel from Public Order Control detained at least 63 people, while seven Carabineros were injured, according to the head of the Eastern Metropolitan Zone, Enrique Morás, quoted by the Europa Press news agency.

Plaza Italia became the epicenter of the citizens’ movement that erupted in the country in October 2019 and led to massive demonstrations that led to the October 2020 plebiscite, which initiated a constitutional process to draft a new Magna Carta to replace the one imposed by Augusto Pinochet’s dictatorship in 1980.

Demonstrations of this type are held every Friday and, in addition to Piñera, the institutional violence of the security forces, especially Carabineros, is the focus of the protests. Several political parties and social leaders requested the dismantling of Carabineros after the death of a young street artist at the hands of an agent a few weeks ago, in an event that provoked new protests in several parts of the country.