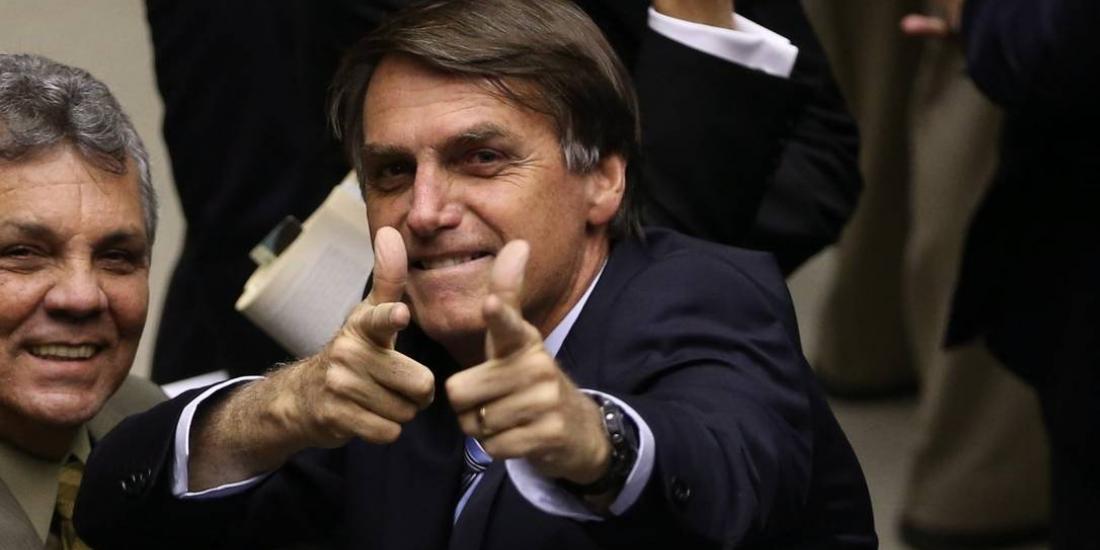 Ten U.S. presidents,[1] 20 CIA directors,[2] and 56 years of covert action[3] screwed over Brazil’s poor and paved the way for the election of Jair Bolsonaro

With the Worker’s Party now waning, a tiny minority dominates the country’s economy. About 1% of the population, i.e., 1.5 million people control 47% of all real estate.[4] Brazil’s poverty rate stands at around 20 percent—which Brazil’s President, Jair Bolsonaro, has no problem with.

The perils of large-scale privatization initiatives under Bolsonaro were evident when the Amazon city of Manaus ran out of oxygen to help COVID-19 patients.

Even when a private contractor informed the government that it could not adequately supply the city, the government did nothing, stating—against all scientific evidence—that early treatment for COVID-19 did not work.

Gravesite for COVID-19 victims in Manaus, where Bolsonaro failed residents by doing nothing when there was a shortage of oxygen. [Source: voanews.com]

Gun ownership meanwhile has risen considerably since Bolsonaro took office in 2019, exploding in 2020.[5]

It’s the law of the jungle, a jungle which Bolsonaro is busy burning down. It’s tropical neoliberalism. Nothing is sacred, least of all the lives of common people.

Bolsonaro has put the economy in the hands of a team of “Chicago boys,” disciples of so-called “free-market” theorist Milton Friedman.[6]

The leader of this team, Economy Minister Paulo Guedes—a former investment banker—was a graduate of the University of Chicago where he studied under Friedman. He has appointed other Chicago grads to top posts, including Joaquim Levy to run a major state bank, Rubem Novaes another, and Roberto Castello Branco to manage oil giant Petrorbras.[7]

Guedes himself lived in Augusto Pinochet’s Chile and liked what he saw. His plan for Brazil is to cut taxes, cut pensions and cut government. In other words, he wants the wealthy at the top to own even more of Brazil.

Brazil began to modernize itself in 1930. The centralization of the Brazilian state followed a “lieutenants rebellion.”

Building and strengthening the nation became the rule. This included the mobilization of the masses. It meant industrialization and development. All under the guiding eye of the Brazilian government.

The leader of this brave new Brazil was Getúlio Vargas (1882-1954). This predominantly benevolent dictator unleashed the power of the state.

Breaking with the semi-feudalism of Brazil’s First Republic (1889-1930), Vargas politicized Brazil’s working class. And therefore subverted the traditional power of a tiny minority who owned everything.

And by developing Brazil’s natural resources for the good of Brazil (Vargas created Petrobras—the government owned oil company—in 1953), he subverted the “foreign markets and foreign investors,” which had dominated Brazil since the 16th century.

How do we know that he subverted the local aristocracy and the global imperialists? Because Vargas said as much in his 1954 suicide note:

Once more the forces and interests which work against the people have organized themselves anew and break out against me…The underground campaign of international groups joined that of national groups which were working against the policy of full employment. The excess profits law was held up in Congress. Hatreds were unleashed against the just revision of minimum wages. I wished to bring national freedom in the use of our resources by means of Petrobras; this had hardly begun to operate when the wave of agitation swelled…[8]

How can we trust his words? Because the dynamic or dialectic he describes explains perfectly the decades which followed his suicide. Time proved him right.

The presidents who succeeded Vargas, Juscelino Kubitschek (1956-61) and João Goulart (1961-64), continued the project which Vargas started: the construction of a popular state-led Brazilian economy. However, an underground campaign of international groups and national groups brought this project to a dramatic end in the infamous 1964 coup.

Washington, D.C. had a code name for the removal of João Goulart—”Operation Brother Sam”—and was prepared to invade if the coup did not go according to plan.

U.S. warships (for example, the aircraft carrier USS Forrestal) were sent to Brazil to assist if necessary. The Central Intelligence Agency (CIA) was the architect of the operation.

It funded and linked the domestic opposition to Goulart’s popular nationalism. One million dollars was provided to the AFL-CIO’s USAID funded American Institute for Free Labor Development (AIFLD), which instructed trade union leaders on how to organize strikes and demonstrations against Goulart.[9]

Afterwards, the CIA, under the cover of USAID’s Office of Public Safety (OPS), ramped up training of the Brazilian police, who set up Operation Bandeirantes, a forerunner of the Phoenix program whose focus was to round up and torture leftist dissidents.[10]

Foreign automakers collaborated with the new military junta by helping to identify “subversives” on their payrolls who were arrested or detained as part of Bandeirantes.

A page from the blacklist. [Source: reuters.com]

Lincoln Gordon, the U.S. ambassador to Brazil from 1961-1966, claimed that the 1964 coup was “the single most decisive victory for freedom in the mid-twentieth century.”[11]

Freedom for U.S. elite interests, that is—and that of U.S. corporations and a minority of Brazilians who monopolized most of the wealth.

In the middle of the Cold War, Washington did not want another Cuba or another China. It viewed the popular agenda of Vargas and his successors as a threat to its global elitism as well as continued access to Brazil’s oil, minerals, and other natural resources. By acting the way it did in Brazil, the U.S., in effect, was directly conserving the semi-feudal social relations which Vargas sought to modernize.

It was the signal foreign investors and foreign creditors were waiting for. Foreign money flowed into Brazil after 1964—while Brazil’s workers and peasants were once again trapped in their own country and forced to accept the lowest wages and worst working conditions. In the eyes of the U.S.-backed elite minority inside (and outside of) Brazil: It was an “economic miracle.”

Brazilians hold up pictures of people “disappeared” by the military dictatorship that ruled from 1964 to 1985. [Source: independent.co.uk]

Never mind the fact that, according to the National Truth Commission, which released a report in 2014, 8,000 indigenous people and at least 434 political dissidents were killed during the period of military rule.

Gen. Emilio Garrastazu Medici, left, after being proclaimed Brazil’s new president by military order in 1969. Brazilians would not have a chance to directly elect their president until 1989. [Source: nytimes.com]

Today, when Jair Bolsonaro celebrates the coup of 1964, he is celebrating a U.S. plutocratic version of Brazil. He is rejecting Brazilian sovereignty and reviving a National Security Doctrine which the U.S. exported to Brazil during the Cold War—a doctrine that highlights an “internal enemy” (working class politics or environmental politics or landless politics or Indio politics).

After World War Two, this doctrine was transmitted from the U.S. to Brazil via military colleges and the U.S. School of the Americas, now called the Western Hemisphere Institute for Security Cooperation. And its purpose was anything but Brazil’s “national security.” On the contrary, it was designed to secure the economic and geopolitical interests of the U.S. and its constituency in Brazil—the tiny minority which owned everything.[12]

Washington, D.C.’s top Cold War planner, George F. Kennan, succinctly summed up the idea behind the doctrine (and therefore outlined the future of Brazil) in 1950—when writing about Latin America:

The final answer might be an unpleasant one, [a military dictatorship, extreme inequality, but] we should not hesitate before police repression by the local government. This is not shameful, since the communists [popular and nationalistic politicians] are essentially traitors […] It is better to have a strong regime in power than a liberal government if it is indulgent and relaxed and penetrated by communists [socially progressive nationalists].[13]

Considering the 1964 coup a “triumphant strike against communism,” Bolsonaro directly served the military government in Brazil in the late 1970s as an army captain.

His superior officers stated that he “had aggressive ambition” including for “financial and economic gain,” a reference to Bolsonaro’s attempt to mine gold in Bahia state.

The Obama administration helped facilitate Bolsonaro’s rise by failing to condemn the illegal impeachment in August 2016 of Dilma Rousseff of the Brazilian Workers Party, who in her youth had been tortured by the Brazilian army.[14]

Rousseff was accused of illegally manipulating government accounts, but the charges were heavily politicized.

Her successor, Michel Temer, was later arrested on more substantiated charges that included accepting a $1 million bribe in exchange for awarding three companies a construction contract for a nuclear power plant.[15]

Brazilians protest 2016 Brazil coup that was again backed by the U.S. [Source: thenation.com]

The day after Rousseff’s impeachment, the leader of Brazil’s Senate Foreign Relations Committee, Aloysio Nunes, came to the U.S. and met with Thomas Shannon, the Under-Secretary of State for Political Affairs, which signaled backing for the de facto coup that brought an end to what the World Bank called Brazil’s “golden decade” under Workers Party rule, during which millions were lifted out of poverty.[16]

Bolsonaro has continued Brazil’s great reversal, never hiding his allegiance to the U.S.

Nor is he hiding his contempt for the Brazil which Vargas and his successors tried to build. In March 2019, after becoming Brazilian President in January—in an act of homage and an act of obedience—he visited the U.S. headquarters of the CIA—the architects of the 1964 coup.

In August 2019, Bolsonaro declared that it is his intention, by 2022, to completely privatize Vargas’s greatest legacy—Petrobras—the state-owned oil company.

There is one more U.S. doctrine which encapsulates post-1964 Brazil and particularly the Brazil of Bolsonaro: the Low-Intensity Conflict doctrine. This is “characterized by the military taking on police roles and the police acting more like the military.”[17]

When a minority owns a disproportionate share of the wealth, the tendency is to criminalize the majority poor. The class war begins to feel like a low-intensity war.

Since the U.S.-made coup of 1964, Brazil has been caught up in a low-intensity conflict in which—to paraphrase President Bolsonaro—people die like cockroaches. Since the beginning of the 21st century—more than 1,000,000 people have been murdered in Brazil.[18] It is safe to say that almost all were poor people—“the children of Vargas.”

Aidan O’Brien is a hospital worker in Dublin, Ireland. On break last year, he visited Brazil and conducted in-country research.Aidan can be reached at: ado1968@hotmail.com.