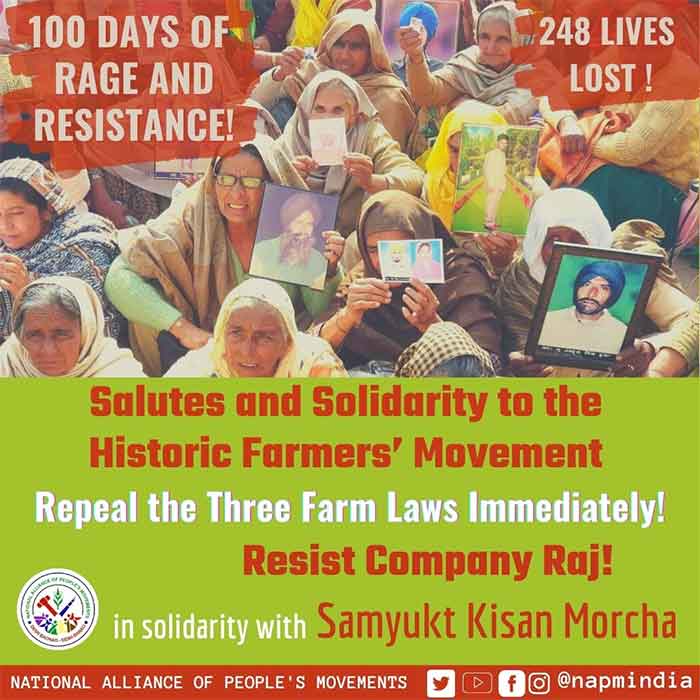 6th March, 2021: The historic and globally recognized farmers’ movement, which entered into an electrifying phase with the ‘Delhi Chalo’ Call on 26th Nov, completes 100 days today. The movement continues to challenge the notorious ‘Three Farm Acts’ that would herald unprecedented levels of corporate control over agriculture, nullifying the mandi system, diminishing the significance of the Minimum Support Prices (MSP) and opening up the possibility of alienation of farmlands to big corporations. Landowning farmers, marginal farmers and agricultural workers, in particular women across all categories, stand to lose by these laws. In addition, this will lead to a general increase of dominance of big corporates such as the Adanis and Ambanis over rural governance and agriculture, enhancing the already existing “Company Raj”.

For more than 7 months, the entire nation witnessed farmers across the country on the streets, raising their voice against these laws that would permanently jeopardize their already precarious situation and also eventually disband the public distribution system (PDS). Diverse sections of civil society and concerned citizens extended support at many places. The farmers and farm workers of Punjab, a state which not only thrives on agriculture but also one that has a long history of farmer unionism have been leading since Day 1.

Under the leadership of the Samyukta Kisan Morcha, consisting of over five hundred farmers’ organizations across the country, along with the All India Kisan Sangharsh Co-ordination Committee (AIKSCC), the farmers arrived at the borders of Delhi in late November, with thousands of tractors from Punjab. They staged historic sit-ins at Singhu, Tikri and Ghazipur throughout the cold winter months. The farmers have also staged roadblocks and rail blockades, peacefully and democratically to communicate their points to the largely unresponsive government and the middle-class power holders in India’s cities.

However, the Govt., continuing its anti-people and authoritarian approach, refused to listen to the farmers who complained that they were never consulted in the process of enactment of these laws, despite being the primary stakeholders. The Govt, its right-wing affiliates and lapdog media houses made multiple attempts to vilify the farmers’ movement, spread fake narratives, clamp down on the protest, inflict injury, undertake arrests etc. The Centre even imposed a de facto economic and transportation blockage of Punjab. However, none of these modes of repression worked in the face of the tremendous resistance of the farming-toiling class.

With their increased participation and leadership, the women farmers and elderly farmers also gave a befitting reply to the disparaging and misogynist comments by that CJI, asking why they were ‘kept’ in the protest. The central role played by women farmers in keeping the movement alive at the borders of Delhi, in the villages of Punjab and elsewhere is awe-inspiring.

Over the months, the movement snowballed across the length and breadth of the country, intensifying the demand for a complete repeal of the three Farm Acts and the Electricity Bill, calling for a legally guaranteed MSP for all crops, for slashing of diesel prices and the implementation of the Swaminathan Committee Report (in particular C2+50). The government’s refusal to accept the farmers’ demands, despite repeated meetings, eventually strengthened the struggle and over the last two months, the movement took wings throughout Western Uttar Pradesh, Uttarakhand, Haryana and Rajasthan. Multiple maha-panchayats and rallies have been convened, in which lakhs of people participated, with the inspiring presence of women in some of them. Today, the protestors have blocked major roads leading to Delhi and resolved to continue their struggle till the demands are met.

As we extend our solidarity, we deeply appreciate the historic achievements of the movement so far. Within Punjab, it has been able to galvanize the non-farming sections and create a region-wide political churning against centralized pro-corporate Hindutva rule. The movement has brought back the “farmer” at the heart of the political discourse, as a category of people pitted against corporate rule. This is an important achievement in times when we stand in real danger of Hindutva-corporate rule being normalized.

Unsurprisingly, and significantly, such a political process has promised to heal the religious polarization in Western Uttar Pradesh and Haryana which the Bharatiya Janata Party (BJP) had engineered through communal riots in 2013, from which it had reaped massive electoral benefits. The Govt was also forced to enter into multiple rounds of consultations with the farm unions, although it was never sincere in its commitment to understand and address the core issues. The pressure from the movement made the Govt announce shelving of the Electricity Amendment Bill and the Ordinance to ‘Check Air Quality Deterioration in NCR’, which sought to impose heavy fines on the farmers. Even the Supreme Court had to take cognizance of the protests and stayed away from interfering with the farmers’ right to agitate peacefully.

Recently, the movement has been able to enlist the support of several non-BJP political parties and the central trade unions – by extending solidarity to the latter’s stance against the Labour Codes – and joined the No Vote to BJP Campaign that has been going on in election-bound Bengal. In other words, the farmers’ movement has moved towards building a cross section social movement and weaved alliances with social movements, trade unions and political parties, in order to throw up a potent political opposition to the BJP’s anti-federal, Hindutva/corporate rule.

NAPM salutes all the farmers of the country and in particular those camping at Delhi for 100 days, braving the biting cold and the cold-hearted government. We respectfully remember each of the 248 farmers whose lives were lost in the past few months, only because of this callous regime. We firmly believe that it is high time the entire nation stood resolutely by the farmers who are fighting a crucial battle for the present and the future generations.

For further details, write to napmindia@gmail.com