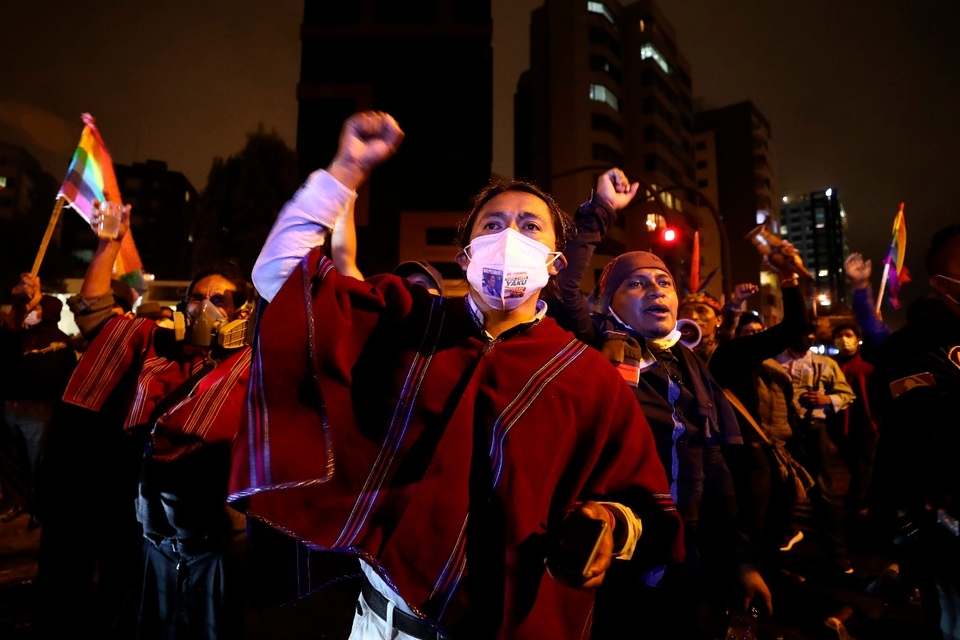 Amidst denunciations and accusations the campaign for the April 11 runoff begins.

Ecuador went from the electoral debate to counting deaths and sorrow. It happened on Tuesday night with aftershocks into Friday: several riots in four prisons in the country left a toll of 78 dead. It was not only the violence, but the form: people decapitated, burned, dismembered with chainsaws, grinders, with body parts torn off. The horror was filmed and broadcast on social networks.

Along with the images of violence reminiscent of that which has become customary in countries such as Colombia with paramilitarism, the screens showed desperate relatives day after day, with tears, prayers, and denunciations of the state’s ineffectiveness. The government, accustomed to reacting late to crises, did what it usually does: deny all responsibility and accuse Correismo of being behind the events.

“It was organized from outside the prisons and internally orchestrated by those who dispute the leadership and drug trafficking throughout the national territory (…) the coincidence with the recent denunciation of the Colombian press about the alleged financing of the ELN to political campaigns in Ecuador -to Andrés Arauz- is not casual, it is very serious that there is drug money in the political scenario of the country”, said President Lenin Moreno in a message.

Moreno, who pointed out that the overcrowding of prisons is the result of his fight against crime, did not mention something that most political actors, analysts and specialists highlighted: the reduction of the budget for the prison system with all its consequences, the elimination of ministries such as the Ministry of Security, and the recent history of massacres in several of the country’s prisons.

The facts were headlines of all the newscasts in Ecuador, within a system of television channels that transmit little or nothing of what happens in the country. However, although the attention was focused on these traumatic events for prisoners, their families and the country, the dispute continued within the electoral process that had its first round on February 7, and will have the ballotage on April 11 between Andres Arauz, candidate of the Citizen Revolution, and Guillermo Lasso, candidate of the CREO alliance and the Social Christian Party.

The result of the first round continued to be challenged by Yaku Perez, third in the race, who arrived on Tuesday outside the National Electoral Council (CNE), in Quito, accompanied by a mobilization. There he announced the presentation of irregularities in 16 thousand minutes – out of a total of 39 thousand – before the electoral power, a figure he later expanded to 20 thousand. According to Perez and the Pachakutik party, the fraud would have robbed him of the second place and, therefore, his pass to the second round.

Perez’s denunciation had a twist on Friday night, when the NEC announced that it had found irregularities in only 31 of the submitted tally sheets, which in reality had not amounted to 16 thousand, with alleged “numerical inconsistencies and missing signatures”, but 7,233, of which 1,453 were repeated.

In this way the CNE closed the fraud complaint filed by Perez. The candidate for Pachakutik had anticipated that, in the event of this result, he would file an appeal before the Contentious Electoral Tribunal, and would insist on the request for an audit presented before the General Prosecutor’s Office to investigate the fraud denounced. Along with that, the Confederation of Peoples of the Kichwa Nationality of Ecuador (Ecuarunari), which mobilized with Perez, and is part of the Confederation of Indigenous Nationalities of Ecuador (Conaie), announced on Friday night, after a crackdown, the beginning of a national strike.

The announcement of new measures of struggle was, however, marked by simultaneous news about the division between Perez, backed by Pachakutik and Ecuarunari, with two of the main leaders of the Conaie, Jaime Vargas and Leonidas Iza, both main protagonists, unlike Perez, during the October 2019 uprising. Iza, for example, did not support the denunciation of fraud, and attributed the fact that Perez did not make it to the ballottage to “an ill-thought-out strategy from the national level”.

The possibilities of street pressure by Perez without the support of an important sector of the Conaie therefore appear limited, as was evidenced in the streets of Quito and some points of protest in the country during the week. As for the Conaie, the movement officially announced that it will make known its political position in view of the ballot in an enlarged council to be held on March 10.

Thus, the threats that still exist against the electoral process, and in particular the candidacy of Arauz, are in the Attorney General’s Office, for the attempt to carry out an audit, as well as for the international operation mounted via the Colombian Attorney General’s Office and the magazine Semana against the candidate of the Citizen Revolution, accusing him of having been financed by the ELN of Colombia. Perez, markedly anti-correista, affirmed regarding this accusation that “if Arauz’s candidacy does not fall before April, then he will fall for having received illicit money from narco-politics”.

In view of the attempt of audit by the Prosecutor’s Office, Union for Hope, the coalition that supports Arauz’s candidacy, announced to have presented a request for constitutional precautionary measures, for the suspension of the proceedings ordered by the Prosecutor’s Office on the occasion of the investigation for alleged electoral fraud. In the communiqué of the coalition it was pointed out that the attempted audit threatens the dates of the second round, besides being an interference of an authority alien to the elections.

Thus, three weeks after the first round of elections, there are still threats to the development of the electoral process, a situation that has been denounced inside and outside the country. This danger was evident, for example, in the joint declaration of the presidents of Mexico and Argentina, Andres Manuel Lopez Obrador and Alberto Fernandez, who agreed to “follow with attention the electoral processes in the region, such as the one currently taking place in Ecuador, hoping that it will be concluded in due time and form, and that democratic continuity will be guaranteed”. Luis Arce, President of Bolivia, later publicly endorsed the declaration.

The coming days and weeks will be marked by possible new developments in a decisive election for the country and the region. On the table is the possibility of Ecuador returning to a progressive and Latin American project with Arauz, or advancing in a deepening of neoliberalism with Lasso. Moreno, who supports Lasso, is attempting in this context to condition the economic future with a last minute measure: the privatization of the Central Bank.