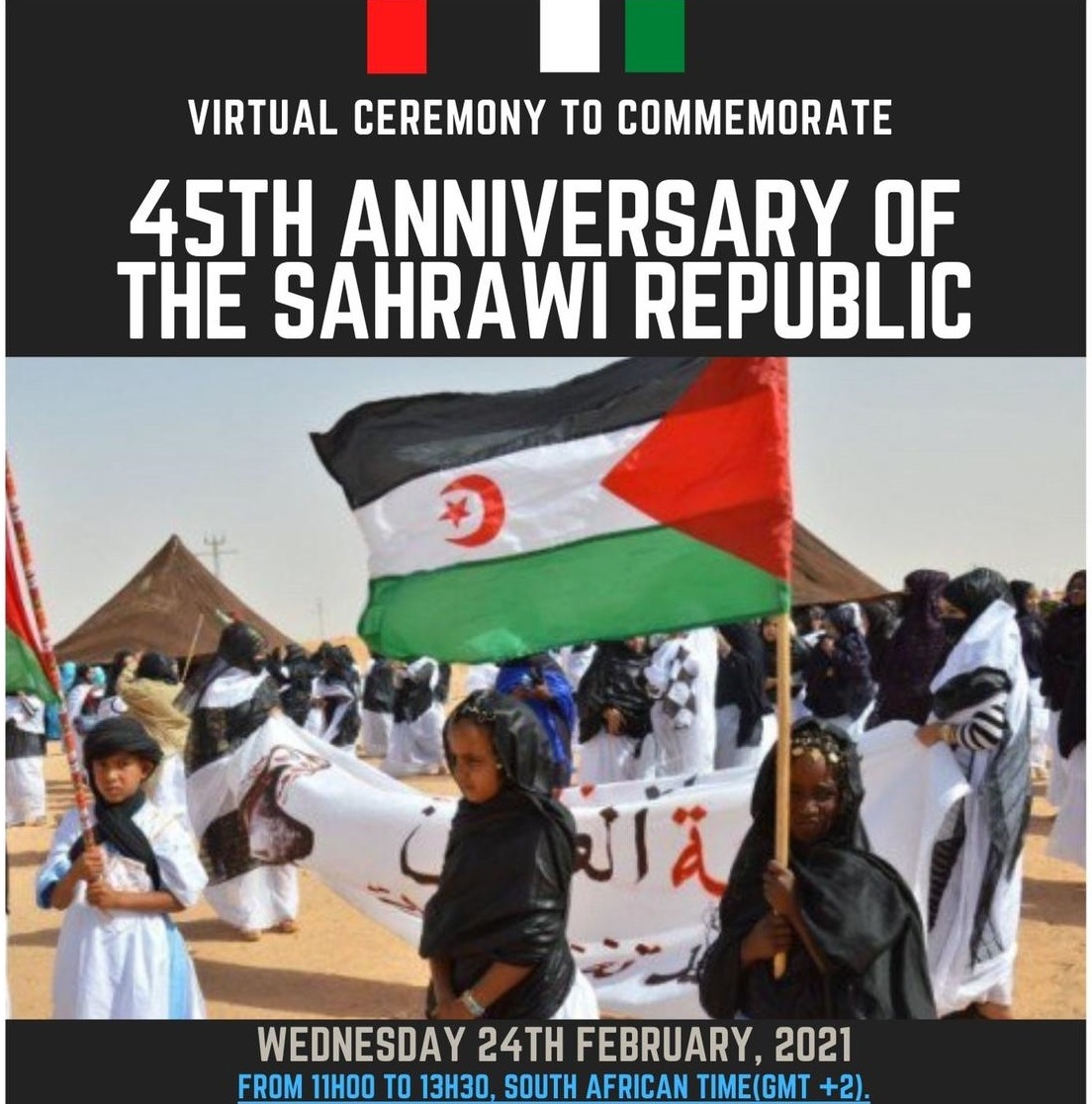 Pretoria (South Africa) 24 February 2021 (Sahara Press Service)- African movements of solidarity with the Saharawi people organised an “African Virtual Conference to Commemorate the 45th Anniversary of the Saharawi Republic” on Wednesday, calling on the UN, AU, EU and ICRC to quickly intervene to protect Saharawi civilians from Moroccan violations and put an end to the Moroccan illegal occupation of Western Sahara.

Composed of African dignitaries and representatives of political parties, trade unions, civil society and academics from 45 countries, the participants to the conference expressed their “steadfast and unwavering support to the legitimate struggle of the people of the Saharawi Republic for freedom and independence.”

They “call on all Pan-Africanists, who love freedom and peace, to stand by the people of this last colony; for Africa will never be free as long as one of our nations is occupied and brutalised.”

In this same vain, they “urge all African countries, political parties, trade unions, civil society, NGOs, Academia, youth and women organisations and the Media to give more visibility and shed light on the heroic resistance of the African people of the Saharawi people.”

They considered that they “cannot, as the current generation of Africans, allow that our brothers and sisters in Western Sahara are left behind or abandoned in this struggle for freedom,” calling on “the African Union to assume its responsibility in imposing the respect for its Constitutive Act and compel Morocco to end its illegal occupation of parts of the territory of the Saharawi Republic. Morocco’s continued violation of the principles of the AU Constitutive Act should not be tolerated.”

The Virtual Conference supports “the decision of the 34th AU Summit of Heads of States and Government held on 6 February 2021 to have the issue of Western Sahara as a standing item on its agenda.”

Speaking to the United Nations, the participants call on its relevant decision-making bodies “to honour its promise to the people of Western Sahara 60 years ago, and organise the long-awaited referendum on self-determination so that the Saharawi people can decide their future.”

With regards to the natural resources, the participating Pan- Africanists called “on the European Union to put an end to the violation of the European Court of Justice’s ruling on its illegal exploitation of the natural resources in Western Sahara,” considering that “the EU exploitation of Saharawi resources is a direct contribution to the illegal occupation and human rights violations in the territory. The EU should be part of the solution to the conflict and not part of the problem.”

On the current developments, the participating activists recalled that “Western Sahara is now a war zone since the 13th November 2020, because of the Moroccan violation of the ceasefire and the attack against Saharawi civilians in Guerguarat region.”

Therefore, they urged “the Red Cross International Commission and the AU Commission on Human and Peoples Rights to immediately intervene in order to protect the Saharawi civilians from Moroccan systematic and increasing human rights violations in the occupied territories of the Saharawi Republic.”

Addressing the dire situation of Saharawi political prisoners in Moroccan prisons, the conference called “for the unconditional release of all political prisoners and freedom fighters, and for an immediate end to the violence against children and women.”

Finally, they “commit to continue to support the Saharawi people in their legitimate struggle for freedom and independence, and encourage all African initiatives and actions in that sense.”