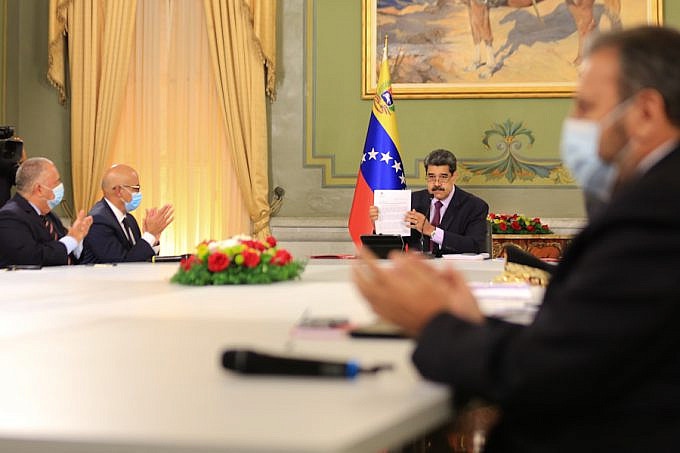 The Venezuelan government has pledged to defend the country’s claim over the Essequibo Strip. (Presidential Press)

Oil is always the great desire and corporations are mapping out the terrain for Biden. Once the direct military option has been ruled out, they insert a wedge in an old border dispute while destabilizing actions persist.

Since the new Legislative Assembly of Venezuela took office peacefully (January 5) and Joe Biden took possession of the White House (January 20) in the midst of a tumultuous coup attempt, there have been movements of pieces on the global chessboard. Diplomacy no longer counts. The US fleet carried out new maneuvers with Guyana over sovereign waters in dispute with Venezuela (January 9) and the USCGC Stone, the new star of the IV Fleet, made its inaugural navigation through the maritime jurisdiction of several South Atlantic countries, in both cases under the pretext of repressing illegal fishing.

In this context, the International Court of Justice (ICJ) of the United Nations declared itself competent to intervene in the centenary territorial dispute between Guyana and Venezuela in which it has nothing to do, and Guyana joined the game of the United States and its big oil companies to “fabricate” a conflict. The target is always Venezuela, a territory in which Biden has a history that dates back to 2015, when as Barack Obama’s vice president he drafted the unusual decree that defined the government of Nicolás Maduro as an “unusual and extraordinary threat to the security” of the United States.

Now perhaps the military option to overthrow the government in Caracas has been discarded, but destabilizing actions, economic sanctions, diplomatic harassment, blockade and confiscation of Venezuelan assets abroad persist. Against this background, Venezuela retained two Guyanese fishing vessels when they were operating in its waters. Caracas’ distrust has its reasons. After the ICJ decided to act in the conflict between the neighbors over the Essequibo -a territory of 159,500 square kilometers in a mineral and forest zone-, Guyana received the explicit support of the United States and the oil company Exxon Mobil, which made its law firm available.

The move of the fishing vessels was quite grotesque but the waves subsided as soon as Venezuela released the workers operating the Guyanese vessels, the Lady Nayera and the Sea Wolf. For now, the pressures continue to point to the economic strangulation, but in Europe as well as in the USA there are sectors that imagine a dialogue between the Venezuelan government and the Venezuelan opposition. An increasing number of countries no longer recognize Juan Guaidó’s status as interim president, and the opposition continues to unravel. Even Henrique Capriles, twice presidential candidate, disqualified Guaidó and praised “the democratic countries that insist on seeking a peaceful and negotiated political solution”.

But the U.S. oil companies – basically Exxon Mobil – are playing a different game. The reason is very simple: after the discovery of a promising oil field in the waters of the disputed area, the company has continued its exploration and it only remains for it to enter fully into Venezuelan jurisdiction. The US sees in the radicalization of the sovereignty dispute one more mechanism of pressure against the Maduro government, after the failure of Trump’s clumsy attempt to enthrone Guaidó. Biden, with his reiterated support to Guyana in the instance opened at the ICJ, seems to be betting on a prolonged confrontation that serves to reinforce the economic and diplomatic siege imposed on Caracas.

In an interview with the Sputnik agency, Venezuelan political scientist William Serafino pointed out that no analysis “can lose sight of the fact that the United States has a definite geopolitical interest in the area, with the aim of reinforcing its presence in the Caribbean in order to limit the movements of China, the Eastern power that has gained ground in terms of investments and commercial exchange”.

The expert believes that the United States has defined itself by a strategy of constant and growing provocation. And he said that this was ratified with the recent visit to Guyana of the head of the Southern Command, Admiral Craig Faller, with the purpose of making military agreements and the supply of arms and training to the Guyanese forces viable. The Spanish portal infodefensa revealed that those military exercises were concluded with the signing of a cooperation agreement which includes, specifically, the delivery of equipment and armaments to multiply the country’s military capacity in the event of an emergency. As far as it is known, beyond the dispute with Venezuela, which the latter insists on settling through dialogue, Guyana has no enemies in sight.

If it were true that Joe Biden was installed in the White House imbued with a new spirit, and he wanted to forget the hate speech implemented by Donald Trump in four years in office – and approved by 70 million Americans and paramilitary commandos like the ones who attacked the Congress on January 6 – he would have to adopt an agenda that is not in his immediate plans. No U.S. president would be able to proclaim that the great power will respect the self-determination of peoples or stop intervening in the lives of Latin American countries.

The Observatory for the Closing of the School of the Americas, an entity with roots in the United States and extended to South America, proposed a minimum, non-basic, agenda that Biden should promote if he really wanted to bring about a change in relations with the region. Among other points they propose:

An end to military and police training of Latin American troops at the notorious and sinister School of the Americas or any other academy that promotes violence and war; closure of the bases installed in Latin America, including Guantanamo, and return to Cuba of this territory usurped since 1903; closure of all institutions where biological weapons can be developed, including the Navy’s Tropical Disease Research Center in Peru and its affiliate at the Soto Cano military base in Honduras; an end to the policy of blockades, threats and interventions in the affairs of other countries, especially Venezuela, where economic sanctions are a true war crime.