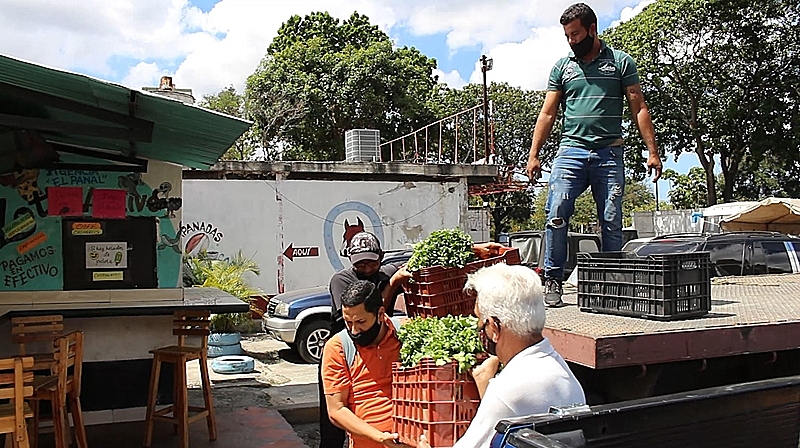 With weekly food distributions and through societal mobilization, the Pueblo a Pueblo project brings food and solidarity from the countryside to the city – Michele de Mello / Brasil de Fato

In five years, 1,500 tons of food was distributed to more than 300,000 families throughout the country

“Only the people can save the people”. With this idea in mind, the Pueblo a Pueblo Foundation (People to people, in Spanish) seeks to apply in real life, union and solidarity between countryside and city. The project is based on bringing food produced by rural Venezuelan communities to urban communes. The goal is to shut out intermediaries, and ensure the societal division of agricultural production: ensuring that the farmer does not lose his harvest, and that the consumer can have access to a diversified basic food basket at a fair price.

“The Pueblo a Pueblo plan has working on this dimension of agroecology as its main focus: creating alliances with popular movements in the countryside and in the city, in order to distribute healthy food”, says project coordinator Gabriel Gil.

Since 2015, 90 small producers have distributed food on 250 different days, selling more than 1,500 tons of vegetables, fruits and legumes, and recently started to raise pigs and goats to obtain dairy products and animal protein. The project is structured in eight states throughout the country, plus the Capital District.

The initiative’s innovative approach can be seen in the quality and price of the food it provides. While the average cost of Pueblo to Pueblo products is around R $ 2.15 per kilo, in supermarkets and wholesale fairs this average rises to approximately R $ 5.50 per kilo. From 15% to 30% of the price is intended to pay for fuel, vehicle expenses and the salaries of those who work with the Foundation.

Despite the pandemic, the program assisted around 53 thousand families in the first half of 2020 alone. With a weak economy in the country, that saw a rise of 2,642% in the dollar exchange rate, inflation of 1,460% and an overall loss of 50 % of Venezuelans’ purchasing power, the project kept prices stable and much lower than in supermarkets throughout the year.

However, the crisis generated by the coronavirus did have an impact the project. Before the pandemic, distribution was done monthly, now it may take up to two months for the Pueblo to Pueblo trucks to reach the Venezuelan capital.

In Caracas, one of the associated communes is called Panal 2021, home to 14,000 people and located in the 23 of Enero shantytown. “Our baskets contain 12 products: tomatoes, onions, cucumbers, chives, leeks, coriander, potatoes, celery, and if we compare it with the prices out there, only one of these legumes would cost more at the prices we are offering”, explains Lilian García , one of the community’s spokespersons, during the 2021 Agroecology Fair.

“Only the people can save the people, now with the blockade and inflation, we have to find a way to produce food and help each other,” says García. 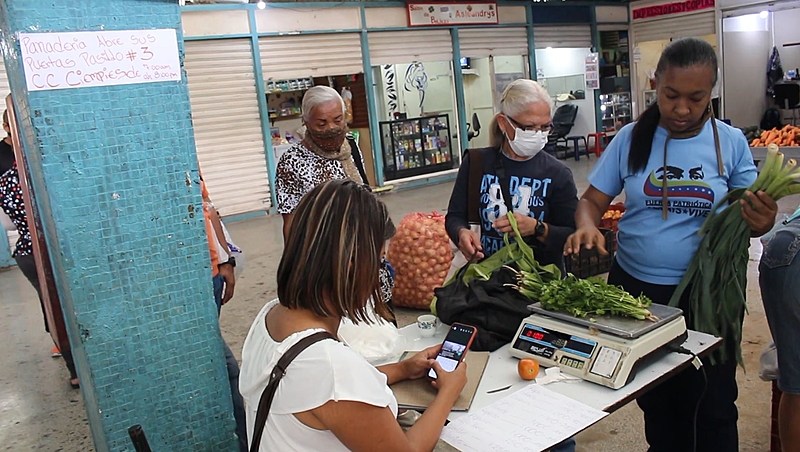 Without state funding, Laura Lorenzo, one of the founders of Pueblo a Pueblo, explains that the secret is to share producers’ expenses transparently, enhance the work of peasants, all without exploiting end consumers. In addition, the established agreement foresees that payments must reach rural producers within eight days after distribution, and part of the amount is reserved for a common fund between the communes.

“It is possible, because there is planning, especially in a country with a history of fighting for land such as ours. There has always been dispute and exploitation, there were always the landowners, the speculators, those who take advantage of the peasant’s work and this forced our peasants, in all corners of our country, to have this desire to organize themselves and, mainly, to organize for production” he says. 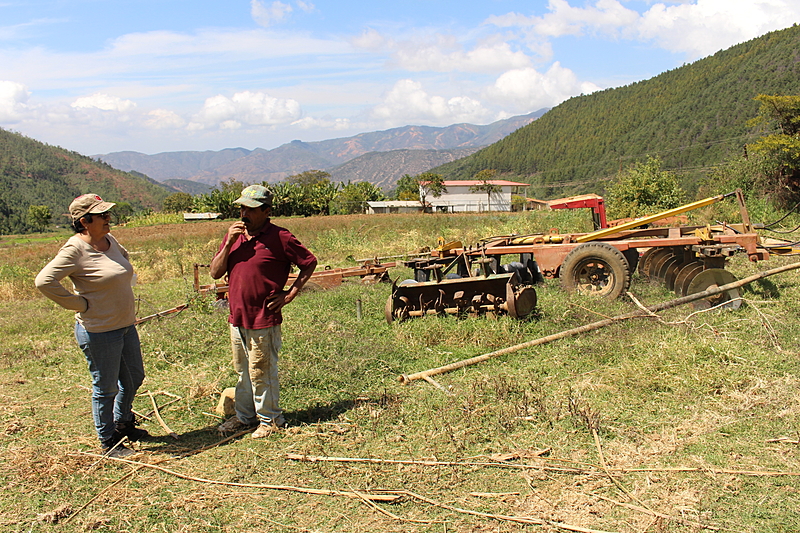 Not by chance, the project was created the same year that the United States imposed an economic blockade against Venezuela. At the time, a group of six former civil servants decided to tread the same route taken by the Venezuelan guerrillas of the 1960s, articulating communes in the mountainous area that connects the states of Trujillo, Lara and Portuguesa, the country’s central-western region.

“We started by meeting with producers, we listened to what they needed, to see how we could solve their issues. So we started working with them: planning the cultivation, how we were going to distribute it, where we were going to distribute it and whom this production would reach. We were always making it clear that it would be social work that would allow us to have an organizational balance both in the countryside and in the city”, explains Ana Dávila, who works at the foundation since 2015.

Today the project has a central supply center in Barquisimeto, capital of the state of Lara, in a tractor factory expropriated by the Bolivarian revolution. It distributes products in nine states in the country, in urban communes, to educational institutions and other social entities.

“We have to demonstrate, autonomously, what we can do. Of course, it will be much more difficult. The [imperialist war against Venezuela] is multidimensional and the struggle must also be multidimensional”, declares Gabriel Gil. 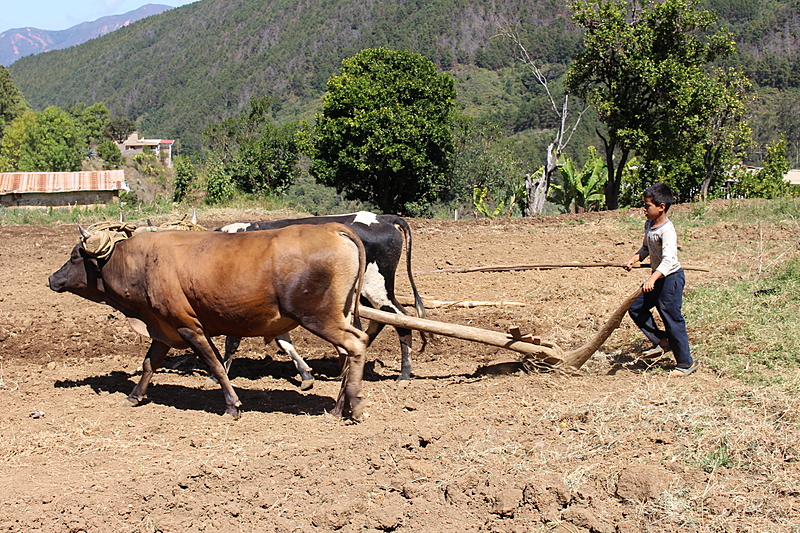 Unable to maintain the tractors, the peasants went back to using animal traction / Brasil de Fato

Difficulties along the way

From 2019 to 2020, distribution times have almost doubled. The reason: lack of fuel. “I harvest zucchini, eggplant, onions and carrots. Unfortunately, last year, due to the gasoline problem, I lost part of the production of eggplants and zucchini. With the lack of gas, there was no way to transport them”, says Luis Loyo, owner of a small 7-hectare property in Humocaro Alto, located in the state of Lara.

Loyo reports that some producers have abandoned certain crops, such as corn and coffee, because the final price does not cover production costs.

With scarcity and the authorization to sell fuel in dollars, smuggling and the black market prevail in the Venezuelan countryside. To buy a liter of diesel or gasoline, a farmer might spend three days in line at a gas station and may be unable to refuel or pay up to US $ 2 (more than R $ 10) per liter of fuel.

“Here, in general, the producer sells to an intermediary. It is the only option you have. And if you have a car to get there, it’s even easier, because the producer never has a truck to take his harvest to the city. The middleman takes the products and pays when he has to pay. It is better this way than to lose all that we planted”, says Keiner Peraza, who ten years ago left the city and returned to his homeland in the Venezuelan countryside. 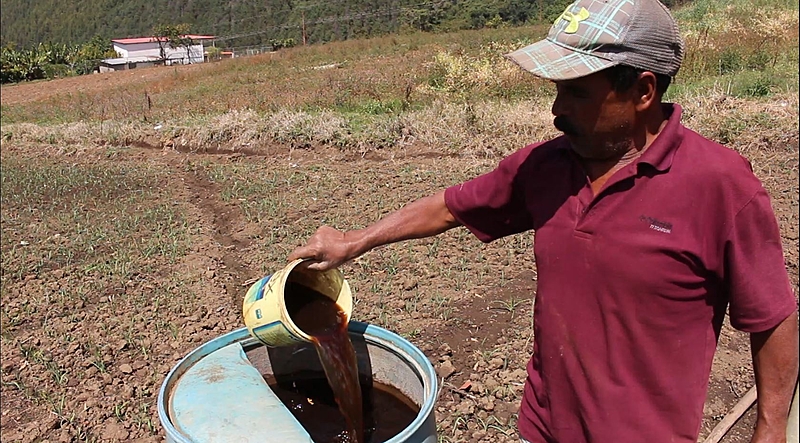 The plan’s founders highlight how the Chavista government restarted an agrarian reform policy in the country, granting land to peasants who cultivate. The redistribution of productive soil was coupled with the creation or expropriation of a series of agricultural companies, formulating a strategy to fight hunger which was praised by the United Nations Food and Agriculture Organization (FAO).

In 2017, President Nicolás Maduro authorized the creation of the Agrosur conglomerate, which united all state-owned companies linked to agriculture. However, with sanctions and an economic embargo by foreign powers, companies were losing their ability to import and subsidize inputs for agricultural production, which meant that the country maintained import levels of around 70% of the basic food basket.

“If we could activate the P for CLAP [Local Supply and Production Committee], which means production would be extraordinary, because then CLAP grants would come with local particularities. There is a proposal for integration between the peasant producing community, the government and consumers”, explains agronomist Gabriel Gil.

The Local Supply and Production Committees (CLAP) are governmental projects that distribute basic food baskets throughout the national territory, and seek to organize the Venezuelan population to combat speculation of the price of food. Periodically, citizens of the country enrolled in the program receive CLAP grants, as a basic needs basket with essential products.

All the while, faced by the crisis, the Ministry of Agriculture and Land has revised its strategy of productive recovery, directing resources to other priorities. The Siembra 2020 plan released approximately US $ 200 million (more than R $ 1.07 billion) in equipment, tractors and other materials: all for larfe agribusiness.

“With all due respect to President Nicolás Maduro, there are vested interests in regards to food imports. The opposition’s import mafia left and a new mafia stepped in, which is in part, made up by members of the military. This approach by revolutionary bourgeoisie, of helping the big and not the small is what is affecting us”, criticizes Gil.

For this reason, the creators of the Pueblo a Pueblo plan offer workshops to assist the production of their own agro-ecological goods and rescue Venezuelan Creole seeds. For the year 2021, their proposal is to create an agro-school in the region of Humocaro Alto, in the interior of the state of Lara, to promote agroecology as a production model and a way of life.

“Being with Pueblo a Pueblo is an experience that goes beyond. Before, we felt separate, now we have meetings and that gives us more confidence, more clarity in our production”, says Daniel Velásquez, a farmer in the state of Trujillo, where the plan initially came about.

In addition to the societal organization of agricultural production, the goal is to create the conditions for peasants to be able to remain in rural areas: guaranteeing access to education, encouraging sports, recovering cultivation drainage systems, and creating fixed selling points for fruits and vegetables within the countryside and in the capital.

“We have already demonstrated that we are capable of producing enough to feed ourselves. Now we need to understand that only unity, class consciousness: knowing where we came from, who we are, with whom we should ally ourselves with. For all these reasons, this is the message that Chávez left us: we are here, gearing up for battle. We continue to move forward with strength and we believe in regional, national and Latin American unity, because we believe in Pátria Grande de Bolívar and Chávez”, concludes Laura Lorenzo, one of the founders of Pueblo a Pueblo.