The independence movements in Haiti began in 1790 combined with slave insurrections and mulatto uprisings that echoed the French Revolution victorious in the metropolis a year earlier. The European monarchies’ harassment of the triumphant revolution in Paris was replicated in the colonies, territories coveted by the reigning houses of the Old Continent.

Haitian patriots fighting against slavery, exclusion and for independence made a tactical alliance with Spain to confront all the scourges that constrained their present and their future. Toussaint Louverture stood out as the main leader and became the father of Haitian independence. As lieutenant governor when independence had not yet been achieved and Hispaniola was divided into two parts, he developed a gradual economic program that was resisted by the upper classes of society close to France and also by the people who wanted the definitive separation from the metropolis.

Internationally, Louverture sought support in the United States, which was a sign of autonomy that Napoleon could not accept, sending in 1801 an army with the mission of imposing control over Haiti and creating a great French empire in America that would unite his colony in the Caribbean with Louisiana bordering the Mississippi River in North America.

Toussaint was forced to capitulate before the powerful French army, but the Haitian independence and social liberation process did not stop, the insurrection broke out with greater force under the command of a new chief, Jean Jacques Dessalines, who unleashed a war to the death against the whites and the French until January 1, 1804 when independence was declared. France and all the colonial powers never forgave Haiti and vowed to make it pay dearly for its audacity… until today.

Although Dessalines proclaimed his support for Francisco de Miranda and the struggle for independence in the South American colonies, his mismanagement of the government and his unbridled enjoyment of the sweetness of power led to his defeat and death in 1806; the country was then divided. In the south, Alexander Petión took over the leadership, who received Simón Bolívar in 1816, giving him material, financial and moral help without which it would have been impossible to continue the emancipation struggle in the continent with the speed that the Liberator organized it. This is another reason for the colonial powers to condemn Haiti in perpetuity. 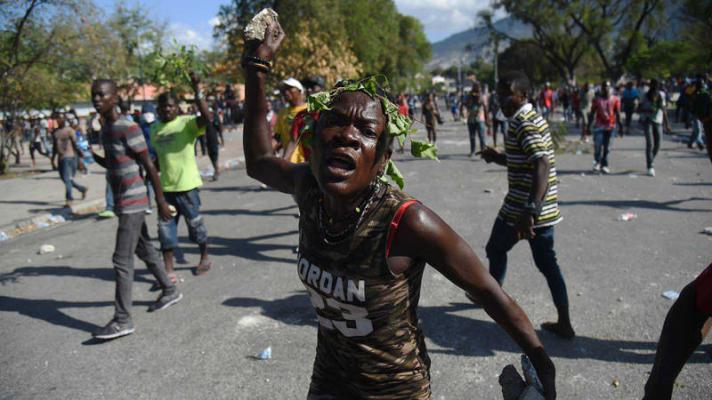 The arrival of the 20th century brought the irruption of the United States as a world imperial power. Just as the defeat of Spanish colonialism led to British neocolonial control, now it gave way to the United States in its phase of imperialist development. Thus, Washington assumed the “responsibility” of making Haiti pay for its decision to be free and sovereign a century earlier. The country was already the poorest in the Western Hemisphere and has remained so to this day.

In 1910, the United States began a string of interventions of all kinds in Haiti. That year, using the Roosevelt Corollary of the Monroe Doctrine as an argument, the government of Republican President William H. Taft sent naval units and a corps of marines to provide “protection” to a group of bankers who under duress “bought” the National Bank of Haiti, managing it from then on as a branch of Wall Street.

A few years later, in 1915, Democratic President Woodrow Wilson emulated his predecessor by ordering the invasion of Haiti, placing its government, army, customs and finances under Washington’s administration, turning the country into a de facto protectorate or, seen in another way, a colony of the United States, whose armed forces remained in the country for 18 years until 1933, when a U.S.-drafted Constitution was imposed on Haiti. Occupation troops murdered thousands of citizens during the years of control of the Caribbean nation.

Instability under U.S. control continued for almost 25 years until 1957, when François Duvalier was enthroned in power and ruled as president for life, carrying out brutal massacres, persecutions, detentions, disappearances and tortures against opposition leaders and the civilian population, all in full view of the U.S. government, which always endorsed such actions. Upon Duvalier’s death, he was succeeded by his son who continued his father’s “policies” until he was overthrown in 1986.

It seemed that Haiti could begin its encounter with democracy and with it progress and development. In June 1988, elections were held in which Leslie Manigat triumphed and became the first elected president in more than 30 years. However, this was soon overthrown inaugurating a period of short and unstable military governments until 1991 when Jean Bertrand Aristide was elected, who was also overthrown but reinstated in power thanks to international pressure, but in 2004 when the country was commemorating the bicentennial of its independence, the United States organized a coup d’état to overthrow Aristide, plunging Haiti into a crisis of gigantic proportions. 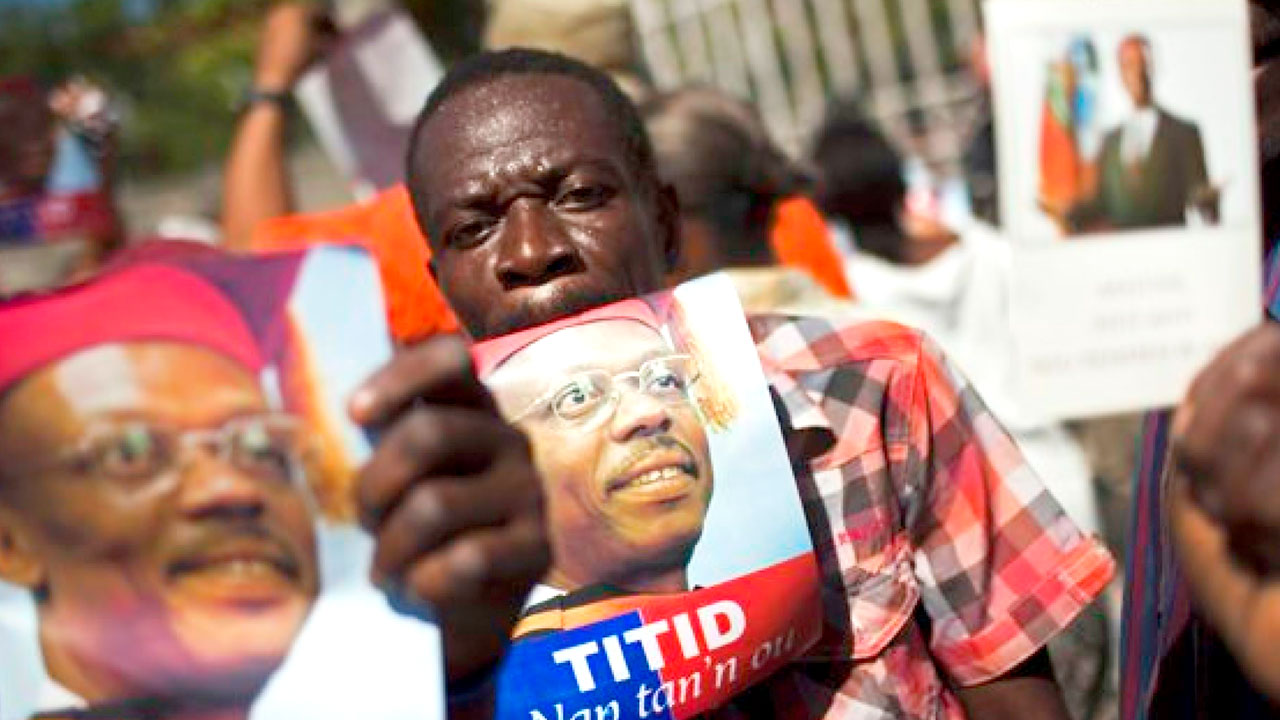 Aristide was kidnapped by the U.S. armed forces and violently removed from the country in the same way that President Manuel Zelaya of Honduras would be a few years later. The event produced strong incidents that led to widespread violence.

South Africa, Aristide’s final destination, demanded a UN commission of inquiry into Aristide’s overthrow but the request was never heard. In return, the UN created a military occupation force under the dubious name of “United Nations Stabilization Mission”. It has not been able to fulfill its mission, nor has it been able to stabilize the country. On the contrary, the United States, which was the cause of the problem, could hardly be the promoter of the solution, using its veto right in the UN Security Council to prevent any decision pointing to a favorable outcome for Haiti, managing at will the military contingent subordinated to its interests.

The UN contingent has become a new plague for Haiti. As early as 2005 they provoked a terrible massacre in the city of Soleil, causing dozens of deaths, including women and children. Added to this are the continuous rapes of defenseless women of the humble population and their incapacity to face the calamities of a country they were supposed to stabilize.

This occupation force, which reached almost 11,000 members among military, police and civil servants and which has been under the command of the armed forces of 20 countries, among them 9 from Latin America, is an embarrassment for the UN and has become a new scourge that has plagued the country.

In January 2010, a massive earthquake devastated the entire country, resulting in more than 300,000 fatalities, 350,000 injured, 1.5 million homeless and the almost total destruction of the country’s fragile infrastructure. Although international aid arrived and helped to alleviate to some extent the monumental humanitarian crisis generated, it was insufficient, serving only as an argument for a new US intervention with 20,000 marines, whose imperial mentality did not help much to extinguish the anguish of a helpless people.

On the contrary, the crisis was used by unscrupulous people to profit from the suffering of the Haitian people. The most blatant and repulsive case is that of former President Bill Clinton, who used his foundation to develop an emergency and reconstruction plan that received billions of dollars, illegally diverting part of that aid and pocketing a percentage.

For Haiti, the Clinton Foundation received much more money than it sent to the country as humanitarian aid, as it had already done in Mozambique, Papua New Guinea, and with Hurricane Katrina in New Orleans, stealing huge amounts of resources, using its contacts in Washington to avoid being audited or being subject to control of the use of the gigantic aid received. Another expression of the filthy imperial morality and the punishment to which they continue to subject the Caribbean country.

Today, the Haitian people are once again fighting for their rights and against the pretension of the puppet president placed by the United States to illegally prolong the exercise of power, sustained by the force and repression carried out by the paramilitary organizations created to repress the rebel insurrection.

For Venezuela, solidarity with Haiti is an everlasting debt, we do not know how much longer it would have taken the republican army to achieve freedom and how many more lives would have been lost if Bolivar had not received the generous and altruistic help of President Petión. Our independence and our emancipation – as well as that of the other five nations that Bolivar liberated – are inextricably linked to Haiti.

To that extent, everything we do is too little. Haiti does not need the military, it needs development aid and, at this juncture in its current situation, moral support and solidarity to defeat the satrap who governs under the dictates of Washington.