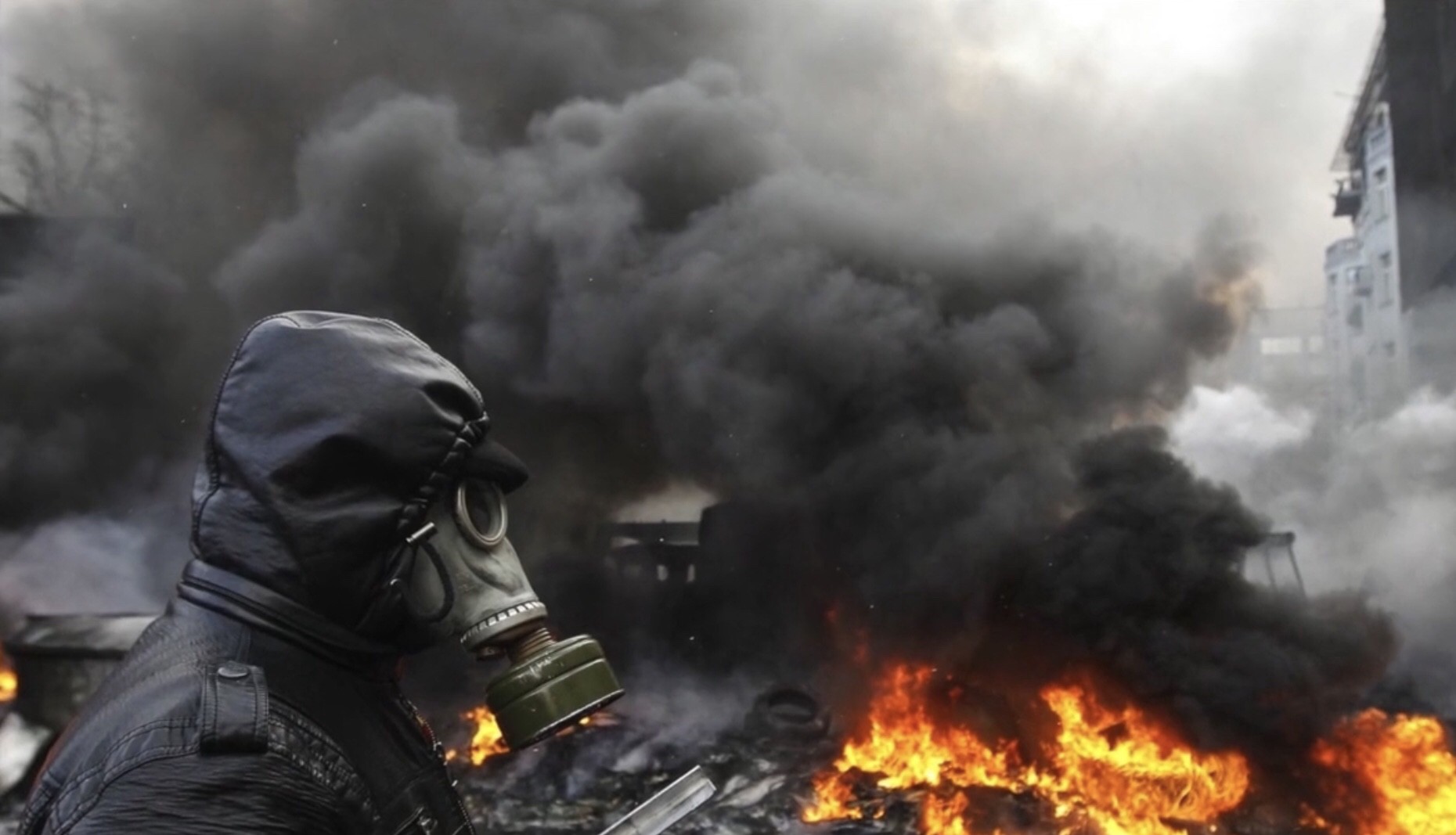 This is a republishing of the third part of my latest article, which is extremely long and therefore in need of being presented to my readers incrementally so that more of them will be willing to read its overwhelming contents. Go to this link to read the full article and access its hyperlinks.

The military analysts behind the U.S. ruling class’ plans for suppressing domestic social opposition have made it clear that they view such internal war as inevitable. A 2016 U.S. Army War College report [elaborated on in my linked article] concludes that the urban invasions it talks about are “inescapable,” and a Joint Special Operations University training video from earlier in 2016 said that the dystopian future which will necessitate these invasions is “unavoidable.” According to the latter report, the climate crisis is one of the many reasons why there’s this total lack of doubt that the U.S. empire’s wars are going to come home. It’s the variable that’s going to push things over the edge as the system grows strained in other ways.

The JSOU video, titled Megacities: Urban Future, the Emerging Complexity, points to a myriad of factors that will destabilize urban areas in the coming years and decades: crumbling infrastructure, growing unemployment, open landfills, and a growing divide between rich and poor, which will make cities into “the future breeding grounds, incubators, and launching pads for adversaries and hybrid threats.” The solution to the military’s lack of preparedness for these threats, the video implies, is to advance the causes that the JSOU describes itself as representing: “to shape the future strategic environment by providing specialized joint professional military education, developing SOF specific undergraduate and graduate level academic programs and by fostering special operations research.”

Given how leaning onto special operations forces is the solution that the military analysts behind the video appear to embrace, there are some obvious flaws in the domestic warfare plan that the national security state had figured out thus far; in a scenario where guerrillas and armed criminal groups are rising up to take territory within large cities, the military wouldn’t simply be able to use special ops to stamp out these threats within the peripheries of the cities while letting business as usual continue in the wealthy urban centers. The military’s only real options would be to start bombing U.S. city blocks, or surrender the besieged cities to the revolutionary guerrillas.

In the last few years since then, the U.S. and its imperial allies have been putting out more material which affirms the new military expert consensus about an unstable near future, and which attempts to address the contradiction within JSOC’s special operations plan. In January of 2017, the U.S. Army War College’s Strategic Studies Institute published a document which concluded U.S. global influence is “collapsing,” and that the growing instability of the world order should be seen as a “wakeup call.”

Short of addressing the dilemma that the U.S. military would face if it were to try to put down an urban uprising, or recognizing that belligerent U.S. foreign policy actions are behind the destabilization which military analysts fear, the document offers an approach towards preemptively stopping a domestic revolt: propagandize and socially control the U.S. population. It warned that the U.S. was overly focused on perceived foreign threats to its intelligence networks, and not enough on “the purposeful exploitation of the same architecture for the strategic manipulation of perceptions and its attendant influence on political and security outcomes.” Therefore, “the U.S. homeland, individual American citizens, and U.S. public opinion and perceptions will increasingly become battlefields.”

This statement was made at a moment when the U.S. intelligence, political, and media establishments were erupting in panic over supposed Russian efforts to influence American politics, and when a campaign had in turn emerged to suppress online information which challenged pro-U.S. narratives. Big Tech companies were cracking down on anti-imperialists at wild speed, and Obama had just signed a bill that created a government entity for targeting the alternative media.

This means the report’s recommendations for suppressing dissenting views and waging psychological warfare against the population were being very much followed. The report’s recommendation for utilizing the U.S. surveillance state in a more politically oriented fashion would soon become followed as well, with Trump’s FBI having started a program to surveil and target activists who it deemed to be “Black Identity Extremists.”

During the next three years leading up to the Covid-19 pandemic and the new economic crash of 2020, the U.S. national security state and its foreign partners expanded upon these kinds of repression under the rationale of preparing for an imminent calamity. In 2018, the British military published a report titled Global Strategic Trends: The Future Starts Today, which anticipated destabilization along the same lines of what the past mentioned military reports predict: the terminal weakening of states around the world, with governments being undermined by growing ethnic and religious tensions while corporations are in turn rapidly strengthened through taking advantage of the social breakdown.

In 2019, the Pentagon specified what these events will mean for the United States. In a report titled Implications of Climate Change for the U.S. Army, it concluded that a breakdown of much or most of the U.S. national power grid will be a sure thing when climate-related natural disasters get severe enough. It said that in response, the military should prepare for a new era of endless war within U.S. borders, with the report calling for the establishment of a massive and permanent military presence inside the country. The report further built a case for this by observing that “Climate change is introducing an increased risk of infectious disease to the US population. It is increasingly not a matter of ‘if’ but of when there will be a large outbreak.”

The irony is that even though the U.S. military is the world’s largest polluter, and militarism-induced austerity is why the U.S. has had the most Covid-19 deaths, the military’s only thought when faced with these crises is to expand its own destructive role. By making these crises worse, it’s perpetually furthering its own need to expend its resources.

Covid-19, which is going to be small compared to the pandemics global warming will bring in the coming decades, has provided a trial run for what the national security state will do when the 2019 Pentagon report’s expectations come to fruition. The pandemic, along with the economic crash that neoliberalism had made inevitable for 2020 in any case, has created dire lower class conditions that have provoked massive unrest-with human rights abuses from U.S. police being the catalyzing outrage. And in response, the state has sent unidentified federal agents to shove protesters into unmarked vehicles for the sole purpose of striking fear among the masses, fired paint rounds at people simply for sitting on their front porches, inflicted mutilation and death upon the overwhelmingly peaceful protesters, and used curfews as weapons.

Larger revolts are going to break out in the coming years and decades, and they’ll be more organized and coherently planned out if the country’s revolutionary socialists manage to keep strengthening their movement. When these revolts come, and they start to move towards a “People’s War” scenario like the one which turned Washington’s neighbor Cuba into a socialist republic, the domestic warfare tactics that this article’s quoted reports have mentioned will be brought out. If the masses seriously try to bring about a People’s War-and this will be for the masses to decide, since the revolutionary vanguard’s members can’t do this on their own-the state’s job will be to ensure that the masses lose.

And how do you defeat an entire population? By replicating what Israel has done to the Palestinians: systematically deprive them of food, water and medical care, routinely bomb and shoot up their neighborhoods so that many of the non-combatants among them die, and set up a system of checkpoints and off-limits zones so that their movement is deeply restricted. Israel also deprives Palestinians of the right to politically organize while jailing them for expressing anti-Israel sentiment on social media, giving us a hint of where America’s current trends of civil liberties erosions and online censorship are heading. Since the national security state knows a class uprising is inevitable, it hopes to prevent this uprising from resulting in a continental socialist revolution by isolating the poor within freedomless military occupation zones.

If this succeeds, the military’s plans imply, the rebel forces will remain contained while the rich can safely enjoy their insulated high-tech urban centers. The War College report articulates this vision by referring to the urban areas with potential for rebellion as “feral cities,” while referring to the wealthy urban areas as “smart cities.” Already, Covid-19 has been creating an opening for Big Tech to begin normalizing “smart cities” by introducing new technological infrastructure, ensuring both that these little capitalist utopias will be realized and that the broader digital surveillance apparatus will be expanded upon.

This has accompanied a campaign by the war machine to indoctrinate the population into a new version of Cold War anti-communism, with the media now frequently feeding the public shoddily sourced stories of Chinese “concentration camps” and portraying China’s highly effective Covid-19 response as a violation of human rights. At the same time, censorship against anti-imperialists is being ramped up amid moves towards a Patriot Act 2.0., which last month’s Capitol Hill riots supposedly necessitated. It’s all part of the effort to keep the masses ideologically tethered to the empire so that a proletarian revolutionary effort can be held off for as long as possible.

In which year is the national security state going to unleash the internal war which these social control mechanisms entail? That’s for the conditions of the country’s class conflict to decide, but military experts have begun vaguely speculating about the date. In a 2018 Pentagon war game where the army needs to fight off a cyber-based uprising from the country’s youth, the year when the action begins is 2025. The Pentagon describes the social conditions that produced the uprising in terms that are appropriately academic, given how the U.S. military’s view of class conflict is purely one of cold calculation about how to preserve the capitalist state:

Both the September 11 terrorist attacks and the Great Recession greatly influenced the attitudes of this generation in the United states, and resulted in a feeling of unsettlement and insecurity among Gen Z. Although Millennials experienced these events during their coming of age, Gen Z lived through them as part of their childhood, affecting their realism and world view … many found themselves stuck with excessive college debt when they discovered employment options did not meet their expectations. Gen Z are often described as seeking independence and opportunity but are also among the least likely to believe there is such a thing as the “American Dream,” and that the “system is rigged” against them.

Perhaps it’s this cold detachment that the U.S. military has from the struggles of the masses that will be its downfall in the coming class confrontation. Added onto all the other flaws in the national security state’s reasoning that I’ve touched upon-a failure to foresee how belligerent actions will put the U.S. at a disadvantage, arrogant overestimation of U.S. military strength, the mistaken idea that controlling the narrative will make up for the military failures, ambitions for massive military victories that can’t be realized, an inability to properly anticipate future crises due to reliance on capitalist orthodoxy, a lack of awareness that American militarism is producing the very destabilization that it seeks to alleviate, unrealistic expectations for what will be practically needed to contain a domestic revolt-this hubristic mindset could he what makes the empire lose, despite its promises to create “new realities.”

The empire is becoming a “Fortress America.” And as the Project for the New American Century hinted at, this could very well spell its doom.