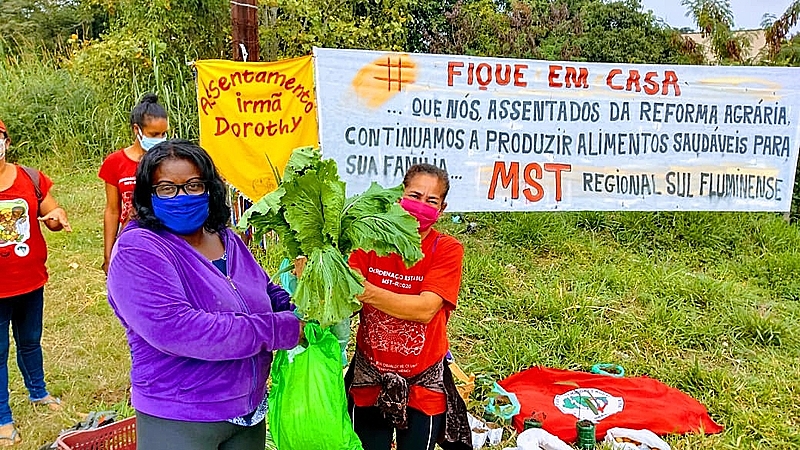 Despite the Bolsonaro government’s attacks, the movement donated more than 3,000 tons of food in 2020.

Between January 20 and 25, 1984, a meeting took place in Cascavel (PR) between squatters, affected by dams, migrants, sharecroppers and small farmers who lost the right to produce food in Brazil.

Amidst the effervescence of union uprisings, the decline of the military regime, and the founding of the Workers’ Party (PT) and the Central Única dos Trabalhadores (CUT), this meeting gave rise to the Movement of Landless Workers and Rural Workers, the MST.

There, men and women founded the national peasant movement with three main objectives: to fight for land, agrarian reform, and social change in the country. The following year, in 1985, the first Congress of the MST affirmed: “Without the land there is no democracy”.

Over the years, the objectives have expanded according to the needs of each era and the conditions of dignity for the workers of the countryside and also the city, to where those expelled from their territories migrate.

In 2020, if on the one hand the movement suffered from the Bolsonaro government’s attacks, on the other hand it showed the whole world the power of family agriculture and its grassroots organization, which enabled the donation of more than 3,000 tons of food during the first months of the new coronavirus pandemic.

On this subject and the expectations for 2021, we talked with Maria de Jesus Santos Gomes, a historical figure of the movement that participated in the first land occupation in her state, in 1990.

Born in Catolé do Rocha, Maria lives in the Bernardo Marin II Settlement, in the municipality of Russas (CE). With 30 years of experience and resistance with the MST, she now serves as the national director of the movement and its education sector.

In the name of so many Marias, throughout the interview she talks about the challenge of the feminine protagonism in the movement and points out agroecology as a way out of the food crisis in the country.

About the dismantling of public policies deepened by the Bolsonaro government, besides the unrestricted support to ruralists and even the incentive to violence in the countryside, Maria de Jesus explains the contradictions preached by agribusiness and reinforces that the movement will remain firm in defense of the popular flags.

The interview, conducted by Bem Viver in honor of the 37 years of the MST, is presented in its entirety below:

Brasil de Fato: Almost four decades after its creation, the MST is still the largest mass movement in the country, with fundamental participation in several agendas: food, education, politics and even health. What is the reason for such a broad profile of the movement?

Maria de Jesus: The MST is the fruit, I would say heir, of all the struggles of popular resistance and the right to access to land in our country.

Our movement is formed by families, not only by men, but women and children. It involves the whole family, so we don’t fight only for access to land. We do not have only economic demands, we have social, economic, cultural and political demands.

Our movement has this characteristic, it is a movement that has a popular nature, a union, massive and political in nature. It defends a political project for the countryside and for Brazilian society. So the construction of this organization so important for the workers is a great hope for the people, for the workers, for the poor.

I have been in the movement for 30 years this year and there is something that has greatly marked it, are the land occupations.

We arrived with these families, most of them are taking only a pot, a bag with clothes, a bag with some cooking utensils, but when we arrive at that settlement five years later we see a big difference between the families, we see an improvement.

I would say that the biggest policy to fight hunger in Brazil is agrarian reform and we need to strengthen this fight, especially at a time like this that deepens social inequalities in our nation.

In 2020 there was a milestone for the movement, which was the First National Meeting of Women. Is this a consequence of the strengthening of the feminine protagonism and the gender sector of the movement that has been developing?

I would say that for me it was like reliving the memory of the construction of women’s participation, which still remains a challenge for us.

In this pandemic, we are working with the campaign against the virus, because we have to be aware that it is not only Covid, but Bolsonaro, that we have to fight.

We know that when society is in crisis, women and children are the most affected, and with this pandemic, with social isolation, violence against women, feminicide, has intensified.

Of course, this is not a reality in our settlements, and that is a good thing, but we know the challenge we still have from domestic violence.

We women in the MST have had several achievements. I would like to highlight some of them.

That of equal participation of men and women. In all instances, from the base nucleus and in the camp, the settlement, to the national direction.

I would also like to emphasize the importance of children’s education, of the children’s ciranda, which was an achievement of ours, of the women.

We also have the challenge of organizing various topics and debates in our political development, and especially peasant and popular feminism gives us much hope for the construction of this historic project of the working class, the participation of women with conscience, defending the value of life, building new social and gender relations.

Fidel Castro himself said something that I like very much: “Every achievement is only worthwhile if we know how to defend it”. So we need to defend the land and the rights that we conquer as landless families.

We cannot give up. The other question is that the massification of the MST will be the answer to this state that has closed the doors to agrarian reform. We need to wage great struggles in this country and this is my great hope for the post-pandemic period.

In the midst of the pandemic, the MST has played a key role with donations of tons of food throughout the country. The food is the fruit of the settlers’ own production. What legacy do the actions leave to the country? What do they have to teach us?

I would like to point out, for example, which state has donated more food. It was the state of Paraná.

All over Brazil, we managed to donate food in the states, but the abundance of food that we have in the agrarian reform settlements of the MST in Paraná is the result of two very important actions of the movement.

First the action of the work of the Agroecology Days. The state of Paraná has already had more than 20 years of work with agroecology, an intensified and massified effort.

The other major action was the training of technicians. Paraná has had more than 20 groups of technicians trained, sons and daughters of the settlers of the agrarian reform.

There we have the IALA [Latin American Institute of Agroecology]. Then this agro-ecological formation, of the peasants and campesinos has made possible today the abundance of food production in our territories, in our settlements and camps.

So agroecology, agroecological-based agriculture, is very important to us. In this sense, it is not simply a matter of having access to land and producing without agro-toxins.

We are building agroecological production systems, where we are seeking peasant, food and economic autonomy, sovereignty of forage, animal feed and water.

For us in the Northeast, this is a fundamental sovereignty, water sovereignty, which now in the Bolsonaro government, all policies to support the semiarid have been cut, but we, the peoples of the semiarid, continue to claim these policies, and one of them is water.

We also consider cultural sovereignty very important. The defense of our ways of life, of our way of making our food, the question of the use of our local food.

The importance of them from the nutritional point of view, but also in the valuation of these foods. And that is our great task.

The preference for healthy production tends to grow in Brazil and the only class that can offer healthy food is the peasant class. We are the farmers of this country.

The Bolsonaro government has been one of the greatest challenges faced by the movement, with the dismantling of public programs and policies, in addition to unrestricted support for ruralists and encouraging violence in the countryside, but 2021 appears to be arriving with a new air, Stedile himself has told us. Is there an expectation of an uprising of mass mobilization? Does the MST feel strengthened for this purpose?

We know what we want with the Brazilian countryside: we want popular agrarian reform

Throughout our trajectory, the MST has been adapting to each moment of class struggle and this has been the greatest wisdom of all the collective instances of the MST and it has made a qualitative leap.

This qualitative leap is driven by several elements. First, to be a national movement. This gives us a lot of strength in our struggle. The second, to have a program.

We know what we want with the Brazilian countryside: we want popular agrarian reform.

Since this program did not materialize, we are very firm in the defense of this project. And agribusiness is not a proposal that meets the needs of the Brazilian people.

Agribusiness does not have the capacity to provide food for the Brazilian population, because this is not its purpose.

And this we have to advance in society, in the understanding of this problem that we are facing, including food insecurity.

I am very indignant to know that Brazil…with so much fertile land, is importing rice. This is absurd. Our country has the capacity and autonomy to produce all the food that it supplies to all the families of our country.

In this sense, the movement is also an answer to the hunger and misery of millions, especially those on the outskirts of cities. We have to think in this sense, of how we will join the unemployed.

We’re living in a moment in capitalism where the issue of employment is structural. And the hegemony of capital at this juncture is not the hegemony of labor, but financial hegemony. Now we need to understand that in agriculture, we don’t have unemployment.

Those of us in the settlements realize how much work we have to do. So I want to say that I see that in the exit of this capital crisis, I also envisage with hope the exit of other types of economies and other ways of life. And agriculture is one of the possibilities. Agro-ecological, agro-forestry farming.

That is why they are not going to conduct any major large-scale fighting. We have to question the concentration of private property in our country.

And we have to demand in Brazil a state that watches over the people. You see, we still don’t have the safety of a vaccine, when the whole world is being vaccinated. So we need to confront all of this that is being done with much struggle, hope and faith that we will win.