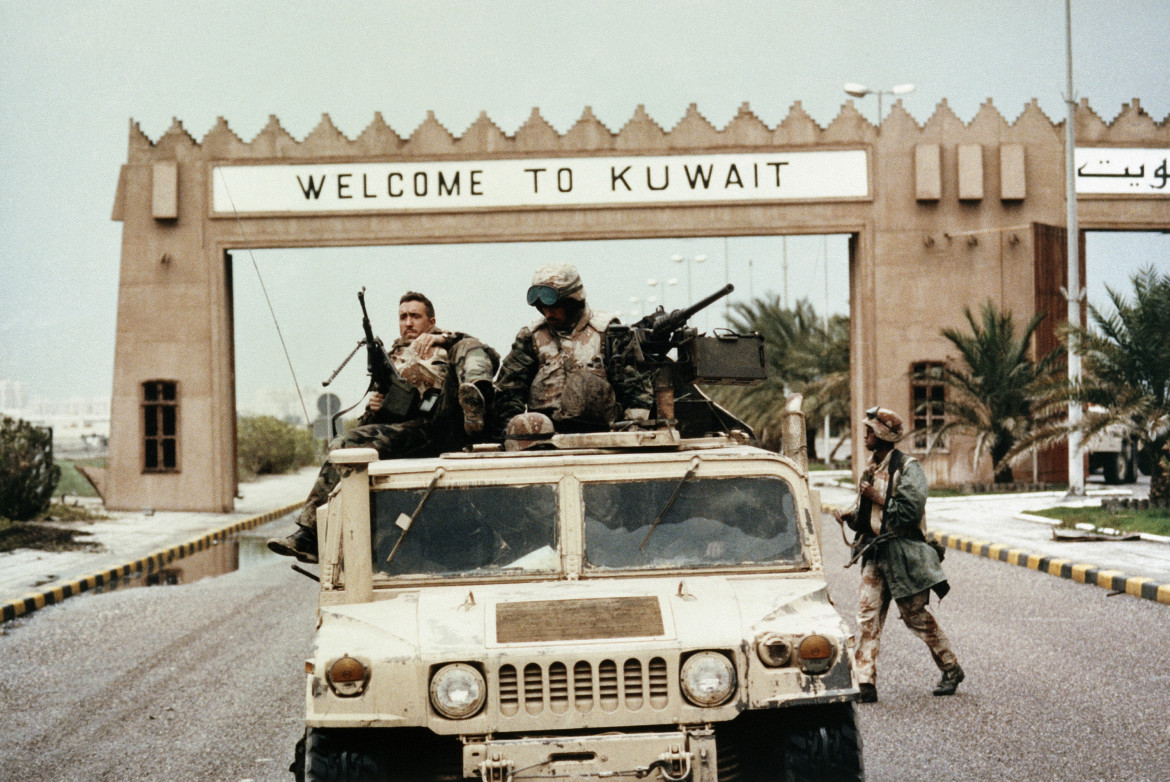 A milestone and a trial by fire. The first UN-backed war, called an “international security operation,” began on January 17, 1991. Once the bombing ended, UN Undersecretary Maarti Ahtisaari visited Iraq and spoke of a country “returned to a pre-industrial level.

Among the victims of the U.S.-imposed intervention was the independence and integrity of the UN itself, created specifically to oppose the “scourge of war”. During the long months between the Iraqi invasion of Kuwait on August 2, 1990 and the ultimatum of January 15, 1991, a sad page was written in the geopolitical history of the UN Security Council: for its purposes of control of the Middle East and hegemony, the US and its allies intertwined diplomacy and economic blackmail, carrot and stick, words of dialogue and the preemptive deployment of ships to the Gulf, denunciations and lies. For example, a fake Kuwaiti nurse, actually the daughter of the Kuwaiti ambassador, accused Iraqi soldiers of snatching babies from incubators and leaving them to die on the cold ground. It was a major blow in favor of the war. All false, but many believed it, including Amnesty International, which only months later, with Iraq already destroyed, prudently admitted the mistake. A toxic narrative began in 1991 – and still continues – to support the need for wars of aggression: the enemy is always demonized, accused of the most heinous crimes, and obviously “a fierce dictator, the enemy of his own people”. A script that we would see many times afterwards.

With the escalation towards war, pacifists in many countries looked on in dismay, protesting in the squares of the world. Especially where the rulers seem to accept the diktat of the United States. At that time, the street was everything because the Internet was only for the few and there were no social networks, because they were distracting and served to encourage false revolutions. Rather, one communicated with radios, telephones, newspapers… Those who participated in the useless commitment of those months between 1990 and 1991 cannot forget the torment of the first night of bombs, and the following ones. In Rome, a group had been meeting in front of the Parliament since January 15. We stayed there even at night. The 15th and 16th passed. We were waiting for a miracle to happen. But at two in the morning a pacifist who had the radio with him reported the news: “They are bombing Baghdad”. The next day, the Italian Parliament decided to participate in the crime. However, the Italian Constitution states in Article 11: “Italy repudiates war” . We shouted to the warmonger parliamentarians as they left the courtroom. Since then, for weeks, it was as if bombs had been raining down on our own house. We witnessed all kinds of war crimes from afar: bombing of aqueducts, air raid shelters, factories. Until the ground offensive in late February, involving the extermination of Iraqi soldiers returning home to the desert … buried alive by Marine bulldozers, burned in their trucks set on fire by missiles. The temptation to burn Western identity cards and seek political asylum in countries not at war was strong.

Months earlier, everything had been decided in the Security Council, on November 29, 1990. On that day, the fifteenth resolution, 678, was adopted, authorizing member states to use “all necessary means” (including force) to achieve Iraq’s withdrawal from Kuwait. The ultimatum was set for 15 January 1991. None of the five permanent members vetoed: China abstained; Gorbachev’s Soviet Union voted in favor. The non-permanent, non-Western members of the Council (Westerners always align themselves with the United States, an old story) are Colombia, Ivory Coast, Ethiopia, Malaysia, Romania, Zaire, Yemen and Cuba. Only the last two dared to say no, committed to a peaceful solution since the beginning of the crisis.

Cuba did not surprise and would confirm in the decades that followed its opposition to wars of aggression, the greatest act of terrorism, perpetrated directly by government armies of the hegemonic countries (members of NATO and Gulf monarchies) or by assassins and terrorists. As for the recently unified Yemen, a republican exception on an Arabian peninsula of sheiks, emirs and sultans, since the beginning of the crisis in August 1990 it assumed seriously its responsibility to be the only Arab country present in the Security Council and reminded the latter that the United Nations Charter required us to pursue above all regional solutions. But the Arab League, subjected to the brutal dictates of the United States and the Gulf monarchs, condemned Iraq on August 4. Only Libya opposed it. Yemen, Algeria and Jordan abstained. Palestine, Sudan and Mauritania expressed “reservations”. Tunisia did not participate in the vote. This despite the obvious “two weights and two measures” with the Israeli occupation of Palestine and the margins of negotiation that appear in the same letters from the Iraqi minister Tareq Aziz (published in Events that led to Gulf War, by Abu Bakr Hamzah).

In the Security Council, the escalation foresees a massive unanimous hunt that intensifies in view of the final resolution 678 (a reconstruction can be read in the essay Calling the Shots by Phillis Bennis). Meanwhile, a veto had to be avoided. The Soviet Union, on the verge of dissolution, was now too dependent on Western aid, and the United States was getting an additional $4 billion from Saudi Arabia for Moscow. China was promised a return to diplomatic legitimacy after 18 months of isolation due to the events in Tiananmen. New aid packages were offered to each non-western, non-permanent member. As for Cuba, U.S. diplomats were trying to see if Havana could be persuaded to stop efforts to get other countries to say no as well. The attempt, of course, failed. Shortly after the vote, Yemen was informed that its “no” would cost it dearly. The U.S., the World Bank and the International Monetary Fund cancelled the aid package. Saudi Arabia expelled almost a million Yemenis who provided cheap labor. The country lost three billion dollars in remittances: the economic disaster contributed to the civil war that broke out between north and south in 1994.

After the imposition of the ultimatum, some countries attempted to find solutions without war: Iran, supported by the USSR; the non-aligned led by Daniel Ortega, president of Nicaragua; India, Germany; and the UN secretary. On February 28, in spite of Iraq declaring its withdrawal, the Security Council capitulated again and did not stop the massacre in the ground offensive.

After the war, Cuba tried in vain to amend Resolution 687 on the ceasefire, designed to leave Iraq under embargo. In the following months, a delegation of Italian pacifists visiting Baghdad hospitals met with a Cuban-Palestinian doctor, Anuar, who continued to embody the internationalist solidarity of Fidel’s island. But the embargo on Iraq, a starvation embargo, continued up to 2003, until the second war. This time not by the UN but by Bush’s son, George W. Bush. And all his allies, especially Tony Blair.