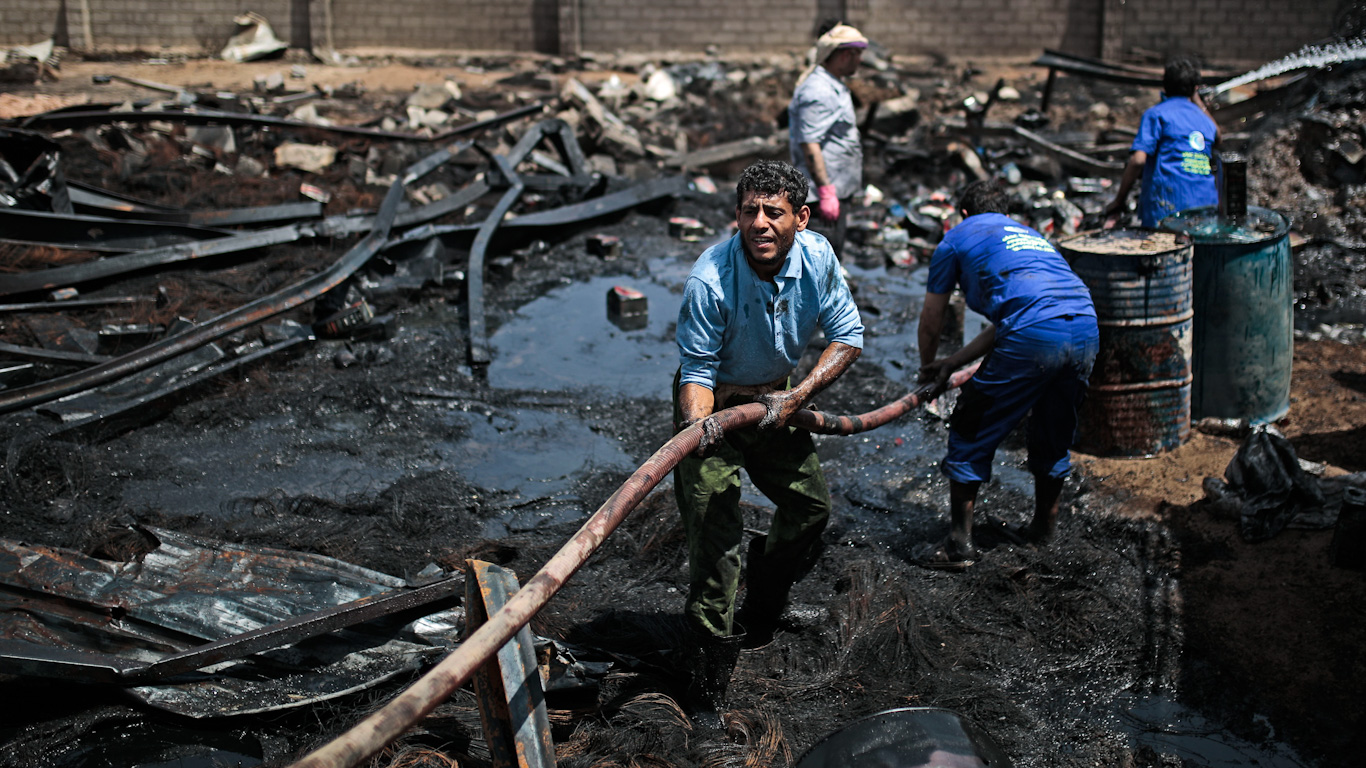 HODEIDA, YEMEN — Yemen’s oil is in thrall to a complex, intertwined network of elites that control the smuggling of fuel imports and new, thriving black markets. Starving Yemen of petroleum products has always been a conspicuous feature of Saudi Arabia’s nearly six-year-long war on the country, however, the most recent blockade is significantly more extensive than previous ones and comes at a time when a pandemic, diseases, and hunger are spreading rapidly across the country. The most recent byproducts of that blockade: the spread of schistosomiasis, a faltering economy in areas outside of Saudi control, and a dangerous new black market.

Known colloquially as snail fever, schistosomiasis is a rare disease caused by flatworms that thrive in untreated water, something now abundant in Yemen as the diesel fuel needed to power many of the country’s water treatment facilities, especially those in rural areas far removed from any electric grid, has dried up amid the blockade.

In a remote village in the Al-Marawa’ah district, Khalid Abdu looks at his thin daughter, 12-year-old Jamilah, with heartbreak as she lies still in the family’s hut. Jamilah is suffering from abdominal pain, diarrhea, and blood in her stool. Khalid said she has worms in her stomach, now distended and bloated in stark contrast to her otherwise meager frame. Jamilah was later diagnosed with schistosomiasis according to her family, leaving her with just three to ten more years of life if she doesn’t receive proper medical care, a luxury in her war-torn country.

Near the family’s hut, hobbled together from a hodgepodge of mud, bamboo sticks, thatch, and reed, sits an old Toyota Hilux, its low tires and thin coating of dust a testament to the fact that it hasn’t moved for weeks. Khalid blames the lack of fuel for the family’s endless problems. “I can’t drive my daughter to the hospital in Aden or bring water to my family, even the treatment plant that I used to go to is closed because there is no diesel,” he said. “Now, we drink, wash our clothes and cooking utensils, and do everything using that old well.” You see the result,” he said, pointing to Jamilah.

As the war in Yemen closes in on yet another grim milestone, the end of its sixth year in March, oil-rich U.S. ally Saudi Arabia continues to prevent oil tankers from delivering much-needed fuel to hospitals, water pumping stations, bakeries, cleaning trucks, and gas stations, plunging the entire nation into an unending fuel crisis.

The CEO of Yemen Petroleum Company (YPC), Ammar Al-Adrai, told MintPress that at least nine tankers have been trapped in Saudi Arabia’s Jizan Port, which sits on the Kingdom’s western seaboard painfully close to the Yemeni border. The tankers, Al-Adrai says, have been held despite being checked and issued permits by both the Saudi-led Coalition and the United Nations. He confirmed that the vessels are loaded with oil derivatives and that some of them have been detained for over nine months, leading to the suspension of more than 50% of the operational capabilities in the service, health, industrial and commercial sectors.

That lack of fuel has caused an acute shortage of even the most basic goods. Khalid told MintPress that “the price of fruits, vegetables, and medicine is skyrocketing and my farm is defenseless against desertification.” Like many farmers, Khalid, who like his daughter Jamilah shows symptoms of malnutrition, is unable to power the pumps needed to irrigate his fields, leaving him unable to grow his own food with which to feed his family and the desert sands encroaching on his now derelict fields. At least 80% of Yemen’s 28 million-strong population is reliant on food aid to survive in what the United Nations has called the world’s worst humanitarian crisis and the decimation of the remaining agricultural sector is likely to increase that figure.

“The [Yemeni] government is indifferent and apathetic to the suffering of citizens, even in areas under their control,” Khalid said, accusing the Saudi-backed government of Aden of deliberately compounding the suffering through the proliferation of the black market. “Fuel shortages in the northern provinces are caused by the blockade, but in Aden, we don’t understand what’s going on.”

By manufacturing an oil crisis in Yemen, Saudi Arabia is able to foment political chaos in the country and stir up popular discontent against domestic oil companies, many of which are run by the Houthi-led resistance. As a sort of grim bonus, the manufactured oil shortages also to incapacitate the Houthi-run port of Hodeida, increasing poverty and unemployment rates and siphoning cash out of the market, according to the Yemen Petroleum Company (YPC).

YPC released a statement placing the estimated economic damage caused by Saudi Arabia’s refusal to allow tankers to unload their cargo at billions of U.S. dollars. The company also said that demurrage fees are now at an unprecedented level of nearly $107 million and that Saudi forces have illegally impounded 72 Yemen-bound oil tankers last year, resulting in an approximately 45% drop in the amount of desperately-needed fuel shipments arriving at Yemeni ports.

The fuel blockade has not only forced thousands of Yemenis to wait for days in lines as far as the eye can see, but it has also left water pumps and treatment plants, and hospital generators without fuel. Most drinking water, particularly in rural areas, is extracted using diesel-powered pumps, while the country’s sizable refugee population survives on water brought in by diesel-powered trucks.

Food imports which generally arrive via one of the country’s ports are processed and packaged at diesel-fuel-powered facilities, factories in Hodeida or Aden before being transported across the country or sold locally.

Outside of the country’s coastal cities where more than 60% of the population resides, freight is transported by road leaving remote communities at the mercy of trucks that must traverse roads pockmarked and damaged by airstrikes. The few who are willing to undertake the dangerous journey must contend with the high price and scant availability of fuel, pushing the price and availability of even the most basic commodities – food, water, and medicines – through the roof.

A thriving black market is born

The oil crisis in Yemen certainly isn’t new, but it has been growing worse recently amid a black market boom which is adding to the already miserable quality of life for Yemenis. The Saudi government is flooding southern areas of Yemen under its control with cheap fuel, exacerbating regional tensions and creating an ideal environment for black market petroleum products to boom. The stark disparity between the availability of fuel in Saudi-controlled areas versus areas under Houthi control is also causing predictable economic damage to the ladder, which is unable to compete amid the Saudi-imposed blockade.

Despite the suffocating siege on the country, petrol products are sold illegally on roadsides, streets, and isolated areas in the south and north of the country alike, often at double the official price with prices in some areas reach 11,000 riyals for 20 liters. These black market petrol products are mixed with water and other materials and enter from Saudi-controlled ports in Aden port and border crossings such as Al-Wadiah outlet, Al-Shahr, and the rich-oil Marib province.

Yemen’s oil is now in large part controlled by a complex network of corrupt officials that control smuggling routes, imports, and black market sales. Many members of these elite groups are also key allies of Saudi Arabia and the UAE. They not only plunder wealth and destroy the economy, but they put people’s lives and property in danger. People are now forced to seek their fuel from shady black market dealers and store fuel in their homes to get them through tough times. Smuggled petroleum products are sold in residential areas and unlicensed storefronts that do not meet security and safety standards and exacerbate the human cost of the crisis.

The crisis is set amid a backdrop of theft of Yemen’s own of crude oil by the Coalition and Saudi-backed militants, a daily occurrence in the Mari and Shabwa Blocks. Recently, Saudi Arabia brought in heavy drilling equipment made to deepen existing oil wells in Hadramout aimed at increasing the rate of oil extraction there.

The effect of the blockade on Yemen is acute, even when compared to countries that are reeling from U.S. sanctions such as Iran, Syria, and Venezuela, where fuel somehow manages to find its way to citizens. Yemen, though, is completely at the mercy of Saudi Arabia, forcing the  Houthi-backed Yemeni Army to step up their oil war against the Kingdom in the Red Sea and putting sensitive oil facilities deep inside Saudi territory at risk of being targeted as they have been in recent years according to the prominent field commander, Major General Yusef al-Madani, the Commander of the Fifth Military Region, the region responsible for Yemeni coasts and territorial waters.

Feature photo | Workers use a water hose to put down a fire at a vehicle oil store hit by Saudi-led airstrikes in Sanaa, Yemen, July 2, 2020. Hani Mohammed | AP

Ahmed AbdulKareem is a Yemeni journalist. He covers the war in Yemen for MintPress News as well as local Yemeni media.