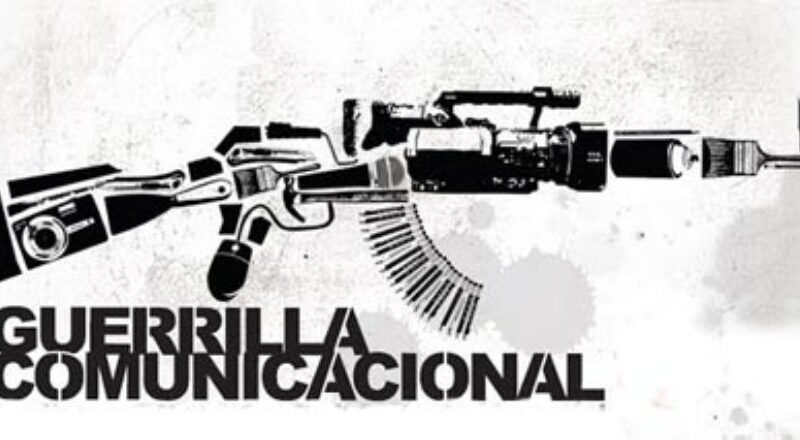 We are urged by a semiotic guerrilla of direct action to produce, by all means, the indispensable cultural antibodies that exterminate, in a short time, the toxic influences of the media and the bourgeois ways to manipulate consciences.

It does not take a great effort to identify bourgeois ideological authoritarianism. Suffice it to show them their contradictions and it will appear, volcanic, a verbiage paid for itself and exultant in low-level arguments, but spit out with great confidence and security. All this with a didactic tone and a certain sweet benevolence, typical of those who feel sorry for inferior beings and guide them with a “firm hand” and generously, along the path of their univalent “reasonings,” often improbable and always authoritarian. It is a metastasis of corruption, the demagogic profile of businessmen who, “involved in politics,” adopt messianic vociferations. And they spread them by all the “means” available to them.

They operate as “preachers” willing to take as categorical truth the slogans they memorize in any hardware store almanac. And by dint of repeating, with airs of grandeur, their collection of inflamed verbiage, they come to believe that they are “intelligent.” Some even hijack academies and organizations where they are accompanied by globetrotting demagogues just like them. They hold academic degrees and reward each other frequently. They create “authorities.”

One recognizes those arrogant people when one watches them desperately handcuff any sophistry that serves to avoid admitting their mistakes. Perched in the realm of self-conferred truths, they do not conceive a millimeter of self-criticism and even less the possibility of thinking how “others” think. They consider their most sclerotic slogans as valid and tremble with terror if they had to admit their clumsiness. Then they redouble the “superiority” of their “certainties… as if they did not know the doubt,” as Borges said. They squander “categorical imperatives” confident of beating the opponent by dint of imposing histrionic follies rather than admitting mistakes.

Even bourgeois life, when it infiltrates the head of the proletariat, usually produces pathetic ideological monstrosities. It produces, for example, reverential victims whose libido expands by repeating ready-made phrases and prefabricated slogans to anesthetize one’s own reality in very diverse contexts and times. The victims learn the rules of the oppressor: Everything else before questioning their premises and conclusions. Everything before recognizing differences and diversities. All to incense their precepts and their egos infected with legal mediocrity. That is what the bourgeois palestras live on and their disciples learn a lot (knowingly or not) from that. They are armies of the ideology of the ruling class in daily action. Stuck here and there, infiltrated in the media and in the modes. They are all armed, with speaking swords, convinced that they must convince us, and impose on us their authoritarianism of egos and sell us their mediocrity made up as if it were a civilizing achievement.

They are unable to reason with evidence. In fact, they exclude or misrepresent it. They are incapable (literally) of thinking in a “complex” way, considering the dynamic integration of five or more variables, each one carrying vectors of competing classes, histories, nuances, and identities not subordinate to the narrowness of life, mercantile ideology, linear and rigid as the interests of capital accumulation. Their most humane reasoning is a rehash of the most banal philanthropic vocabulary, spread in self-help seminars or business coaching.

We are urged by a semiotic guerilla of direct action to produce, by all means, the indispensable cultural antibodies that exterminate, in a short time, the toxic influences of the media and the bourgeois ways to manipulate consciences. To the letter, word for word. And in addition to the “emancipatory cultural vaccines,” we need to organize the ideas and values produced in the struggles to free ourselves from exploitation, the pandemic of anti-values that make us self-conscious, exclude us, stigmatize us… The semiotic guerrilla against the bourgeois humiliations is proffered against stupidity on parole. We are not the same.